Some photos – especially photos that include a sky and a ground – lack the blessing of having all elements in the image exposed perfectly. More often than not, the sky will be overexposed or the ground will not have enough exposure, leaving you with an image not representative to what your naked eye saw that day. If you have the ability to produce two entirely different exposures of the same scene, and have Photoshop at your disposal, then you are quite the lucky photographer. In this tutorial, I will show you an easy way to blend exposures so that you can have a perfectly exposed image that captures the true beauty of the photo you intended to create.

Ideally, you will want to have two different exposures that were auto-bracketed out in the field with a tripod. You could just adjust the exposure of one single RAW file and save two copies, but two entirely different images to work with would be best.

1. Open both images in Photoshop and choose which image you would like to be your base. For the example photo, I chose to use the foreground/clam shack image as the main file. Once it is chosen, bring up your other file and click CTRL + A to select the entire image, then CTRL + C to copy it. Now return to your base image and press CTRL + V to paste it (Figure 1); Photoshop should automatically paste your other image on a new layer right on top of your base photo. 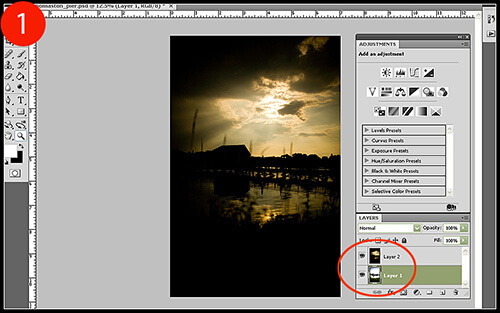 2. While holding down the ALT key, click on the “add layer mask” icon located in your layers palette toolbar to add a black masking layer, which will allow us to blend in the layer to which the mask is applied to (Figure 2). 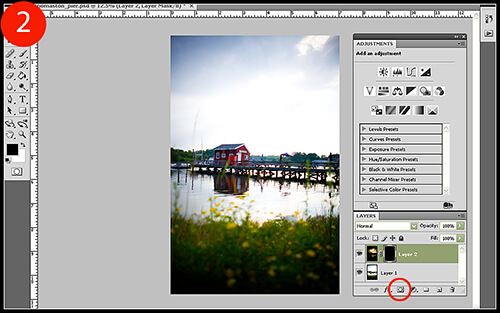 3. With your Brush tool (keyboard shortcut: B) set to 100% Opacity and having a foreground color of white, begin to brush the areas you want to blend. Depending on what the subject matter is in your photo, expect to adjust the Hardness level a few times. In the example image, I used a 0% Hardness level for the sky and treeline, but when I started to blend in the sky where it meets the roof of the clam shack, I switched to a small brush size set to a Hardness level of 90% so that there was very little blending of the layers (Figure 3). If I did not, the transition between layers would be too gradual and the image would look unnatural. 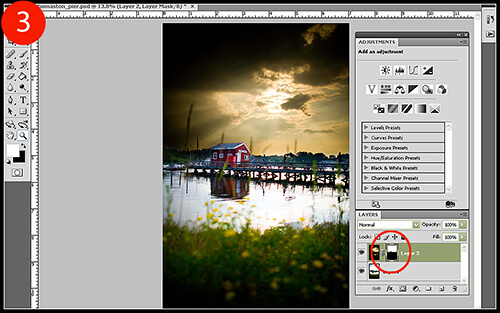 After adding some finishing touches in post process, this is the end result:

Exposure blending is meant to be an invaluable way to obtain images that have a variety of different exposures, but at a much higher level of control than if you were to blend these images with HDR. This technique can be applied to any genre of photography, not just landscapes. This method can help fix those dewdrops on a flower that were inadvertently overexposed, or even the underexposed background of your most recent portrait can benefit greatly from this highly customizable way to expand your limitations on photography.