Wildlife photography is an exciting and rewarding craft that provides endless opportunities for creative expression and fulfillment. From capturing the dignity of a majestic lion to photographing waltzing penguins along a sandy shore, no two subjects are ever alike. Wildlife photographers also get to enjoy the peace and tranquility of nature while exploring new places. Seeing familiar wildlife in their natural habitats or getting an up-close view of an animal you’ve never encountered before can give you a great sense of accomplishment and pride in your work. Finally, being able to look back on all your images afterwards is a true reward that makes wildlife photography especially fulfilling.  In this article, renowned wildlife photographer, Richard Barrett, shares his tips for incredible wildlife photography.

About the Author – A passion for wildlife photography: 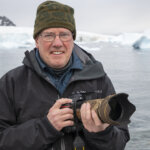 Over a decade ago, in early retirement, Richard Barrett revived his interest in photography and booked a photographic tour to Kenya’s Masai Mara. He’s been hooked ever since and is now one of the UK’s top wildlife photographers.

His stunning photographs of all the iconic species around the world, on land and water, are the outcome of hundreds of trips. In his early days he often booked onto wildlife photography tours and found that travelling in small groups was an education: he learned from other keen travelling photographers: when to go, what equipment is best, times of year, best light, best backdrop etc.

In time Richard’s photo galleries were attracting so many queries from enthusiasts wanting to learn from him that he has now written a book in which he shares his photographic tips through chapters on how to take the best travel portraits of tigers, elephants, grizzlies, cheetah, orca, chimpanzee, jaguar, humpbacks and polar bears. 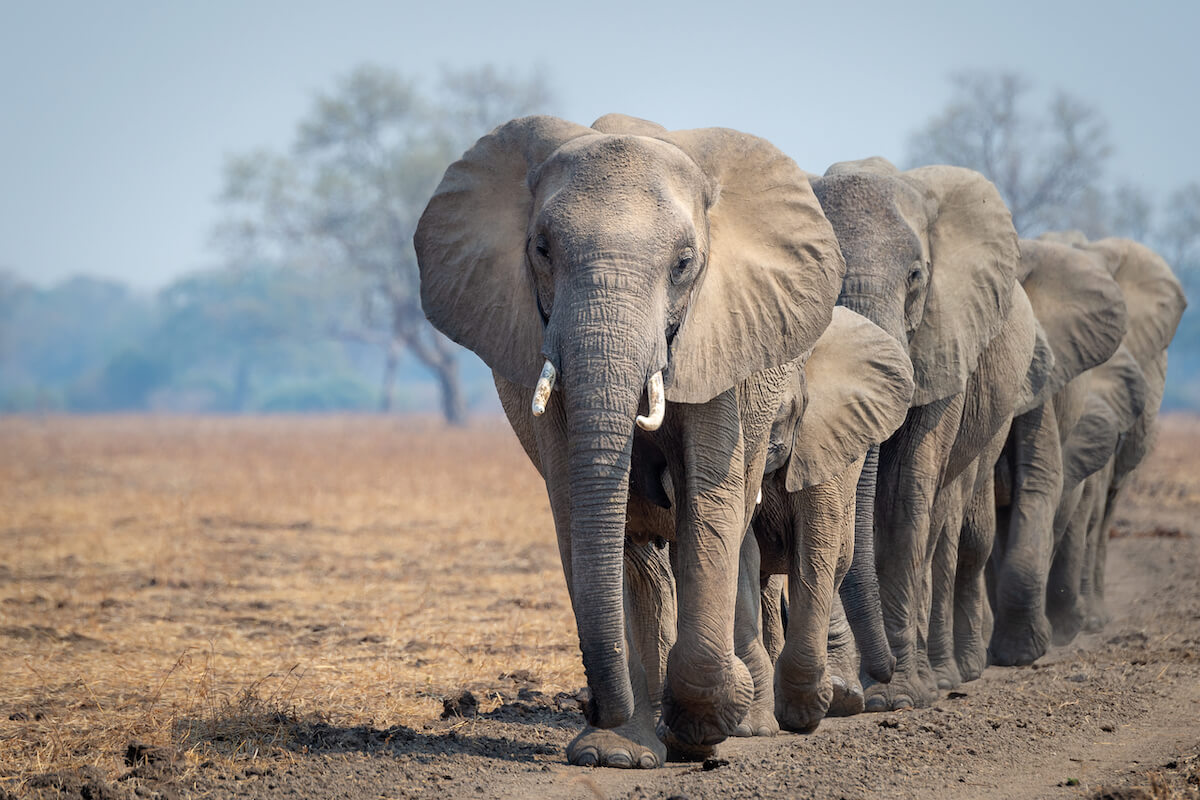 Taking wildlife photos can require fast reactions, or sometimes meticulous planning. Take the challenge of capturing an elephant on camera. If you want to convey its vastness, for example, he suggests getting low to take the shot: ground-level by a waterhole is ideal and some parks even have special semi-underground constructions for this purpose. He particularly recommends Kitiru Conservancy for these low camera angle shots.

If photographing from a jeep, he recommends placing a beanbag on the side of the vehicle and when taking a shot, gently pressing the camera lens down onto it. The golden hour for elephants is between 6-7am. Or if at sunset, he is looking for a silhouette against the warm tones of the sky. He recommends traveling with a group of photographers, not sight-seers when on an elephant safari, as the general tourists will want to move on to the next spot more quickly than the photographers. The costs of a bespoke outing can be shared by fellow photographers with the same requirements.

He discusses the best terrains for your iconic shot: if you want elephants kicking up clouds of dust on the plains, then August-October and February to March are your best months, but if you want moody, cloudy skies then he finds the short rainy period of November are best, although heavy rain then is a risk. He finds cloudy skies are better than solid blue as a backdrop for elephant photos. In his elephant chapter alone, he includes 18 of his own stunning elephant photos with a commentary on each of them about what he was trying to achieve, how he did it, what time and where. 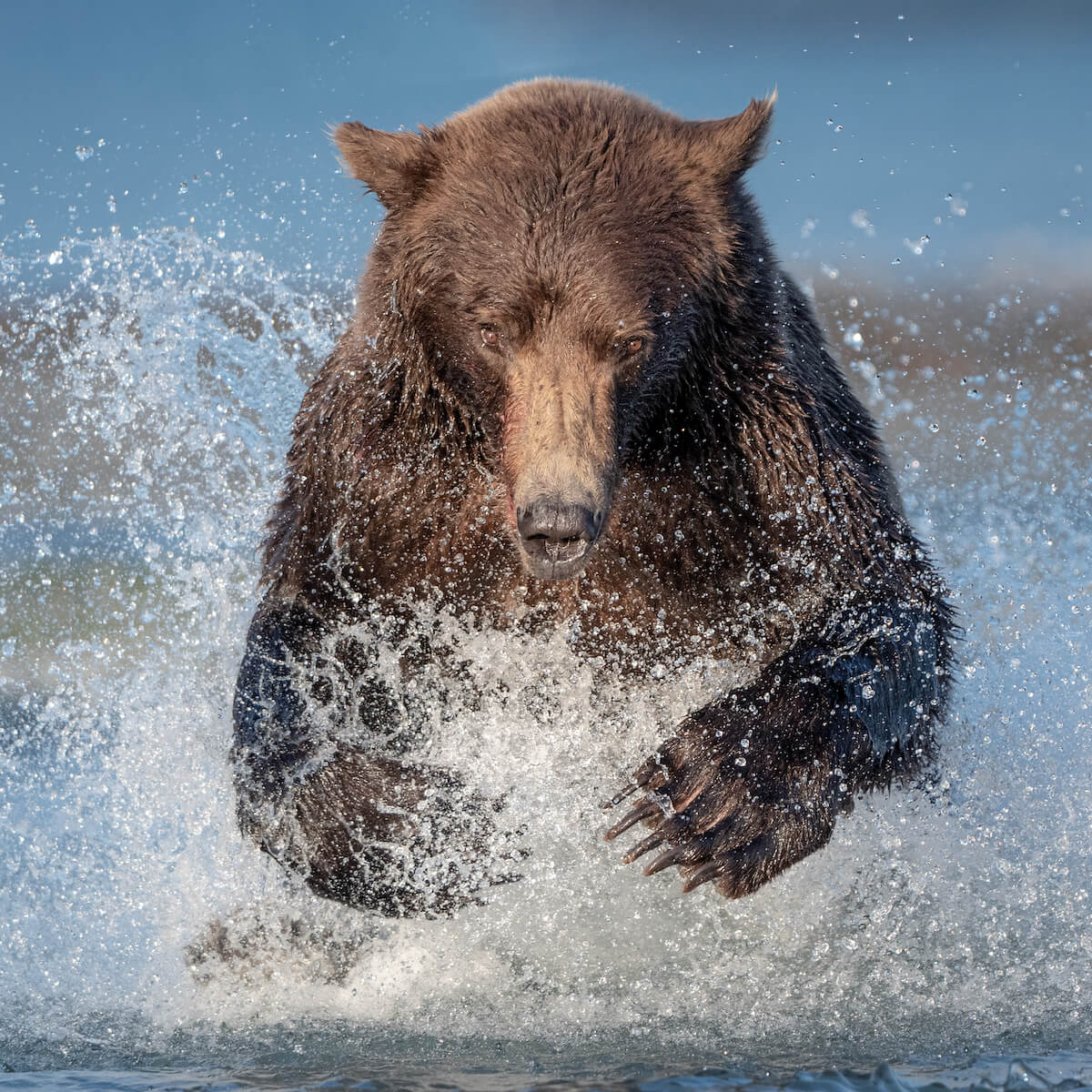 To take another species, the grizzly or brown bear, Richard explains that his trip to Alaska only allowed 23 kilos on the floatplane: what to take? His photographic equipment: lenses, tripod, camera, took up 17kg but were the priority for his 8-day trip. He describes his exhilarating time in Alaska’s Katmai National Park and his encounters with bears fishing for salmon.

Get low to the ground:

He again recommends lying on the rocky shore if possible, for many of the shots: ‘yes, it’s uncomfortable lying down holding the camera but absolutely worth it’ to get the splashing action of those huge paws in the water. Be ready for the unexpected, he advises, illustrated by his sharp photo of a wolf walking by with a salmon in its mouth. He sets off in a trailer on the back of an ATV at 6.15 each morning hoping to catch an orange dawn. Getting within 10 metres of a large grizzly pacing the banks searching for salmon, the group either lie on the beach or set their cameras on low tripods in the dark and wait. Richard decides on taking multiple shots with varying combinations of settings, hoping one will work. He places a plastic sheet on the beach to keep the camera and lens dry and free of sand. As soon as the light is perfect he takes hundreds of photos in the space of about five minutes in the hope that at least one of the settings will work. It does. 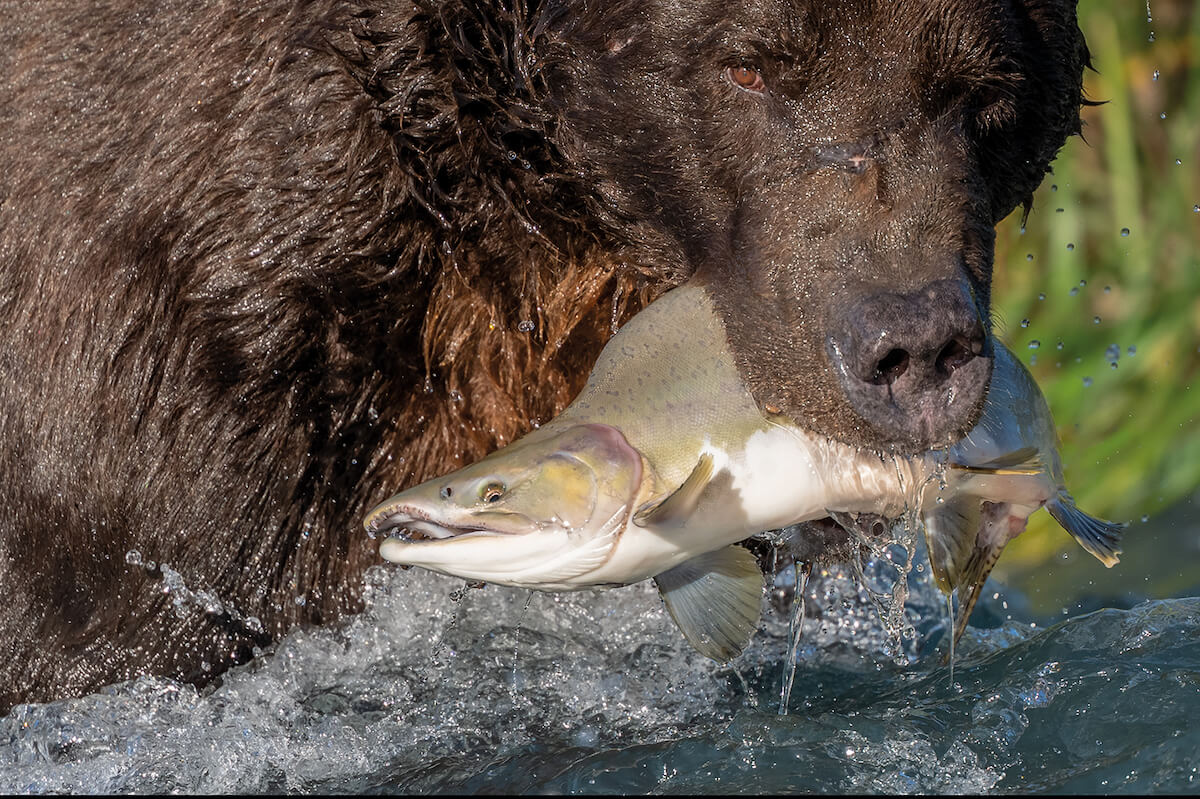 His specific tips for shooting in low light? He admits that in the dawn twilight, it can be difficult to get a clean sharp shot. Firstly, the lens needs to be set to its widest aperture, to let in the maximum amount of light. Then ideally, he recommends, set a fast enough shutter speed to freeze the movement of the bear and avoid camera shake, and also set an ISO setting that doesn’t produce too much noise. However, if the light is very low, he says you will have to compromise on both these numbers. In Alaska he ended up with 1/320 sec and ISO 25,600, the highest ISO that he dares use with his Nikon D5. With such high ISOs, the images needed a careful noise reduction in post-processing. 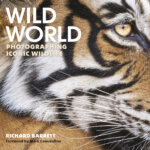 In the 272 pages of his coffee table book, Richard shares both general and specific tips and his own wildlife photographs which will help anyone make the most of their investment in a wildlife safari to any part of the world. His recommendations about the best wildlife parks to go to for each species, what time of year and which photographic tour companies are the best for each, are worth the price of the book alone.

No longer will you come back from that wildlife trip of a lifetime with disappointing photographs.