Forced perspective photography is when the subject of an image looks smaller/larger or closer/farther away than it actually is. This optical illusion happens when the background and foreground of a photo seem to interact due to the photo’s composition.

This technique is often used humorously, but it can also be beautiful, meaningful, and even practical. For example, Peter Jackson used forced perspective to make certain characters look much shorter than others. (To copy this look, check out this Lord of the Rings tutorial from No Film School.)

Want to try out this technique for yourself? Here are some tips and inspiration for your own forced perspective photos. 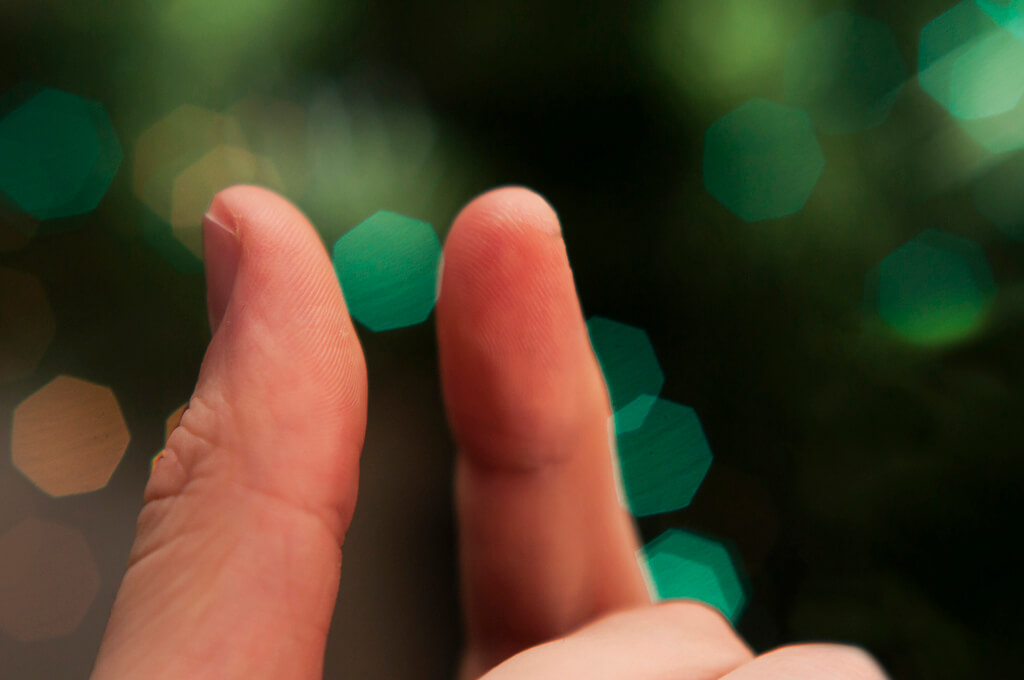 Before you dive into a photo shoot using forced perspective, know that the best pictures with forced perspective take time to create. While you might be able to pull off a quick, impromptu shot, you’ll probably need more time to set up and capture the shot.

If you’re feeling rushed, the following tips won’t be as effective. Give yourself time, and you’ll be more likely to come home with a great photo.

Yuval Y – Me catching the sun 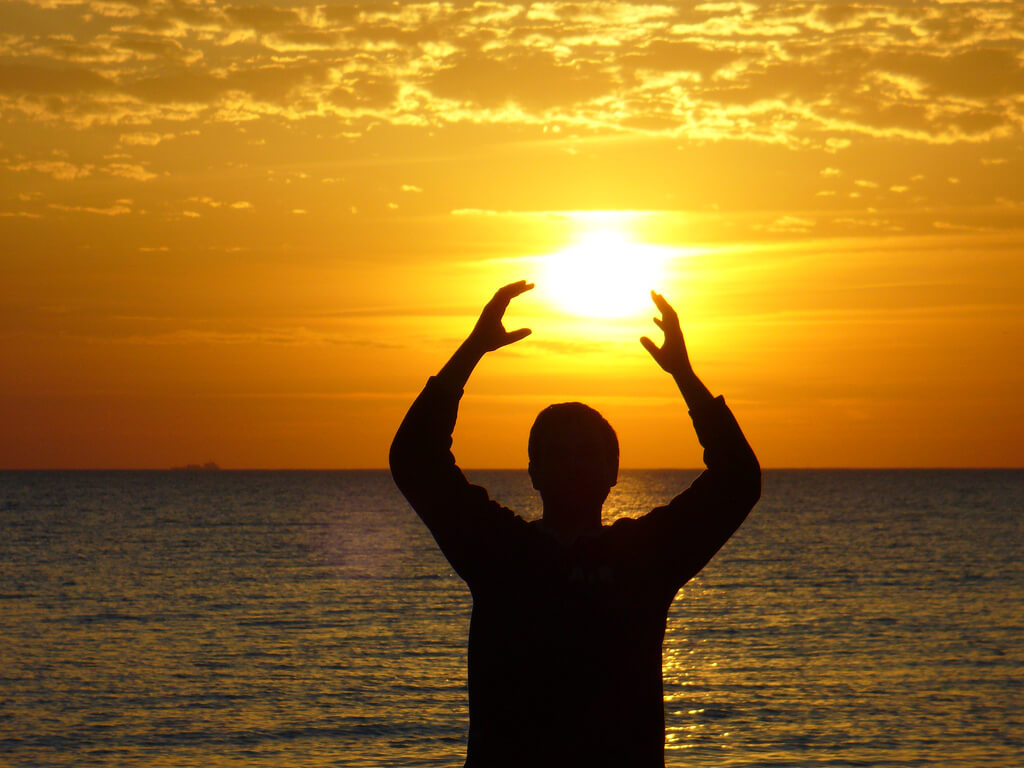 Work with a partner.

When you’re shooting alone, getting a forced perspective composition just right can be difficult. Unless you’re working with objects that are within hand’s reach, you’ll have to walk back and forth to reposition the subjects and check their position in your viewfinder, over and over.

When another person is helping, they can make the adjustments while you look through the viewfinder, so the shoot goes a lot faster. Of course, you’ll need to communicate clearly and give good instructions, so they know exactly what to do. It might also help to show them example photos of what you’re trying to achieve.

If none of your friends or family members are willing to spend time helping you, consider asking a fellow photographer if they’d like to do a shared photo shoot. Then, you can take turns shooting the photos. Besides speeding up the shots, this shared photo shoot can also lead to more learning and ideas, and you can inspire and give feedback on each other’s shots. 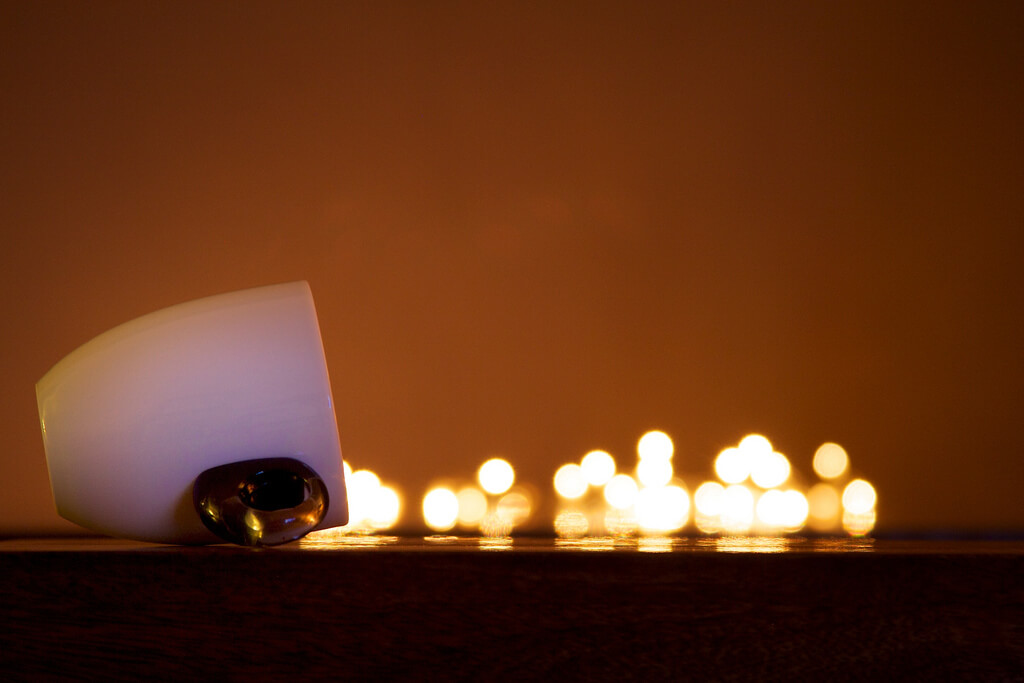 If you can’t get a partner for the shoot, you’d be best off using props. While a self-portrait is possible, too, it’s a pain unless you know how to shoot tethered. If you don’t, you might have trouble getting the right composition. It’ll take a lot of trial and error.

Besides, props can be just as interesting as portraits if you choose the right ones. The best props relate to the environment somehow, strengthening the connection between the foreground and background.

For example, British photographer Michael Hughes has a popular photo series that combines forced perspective with travel souvenirs. The connection between the souvenirs and the tourist sights they represent is so natural, it’s easy to see why he combined the two. 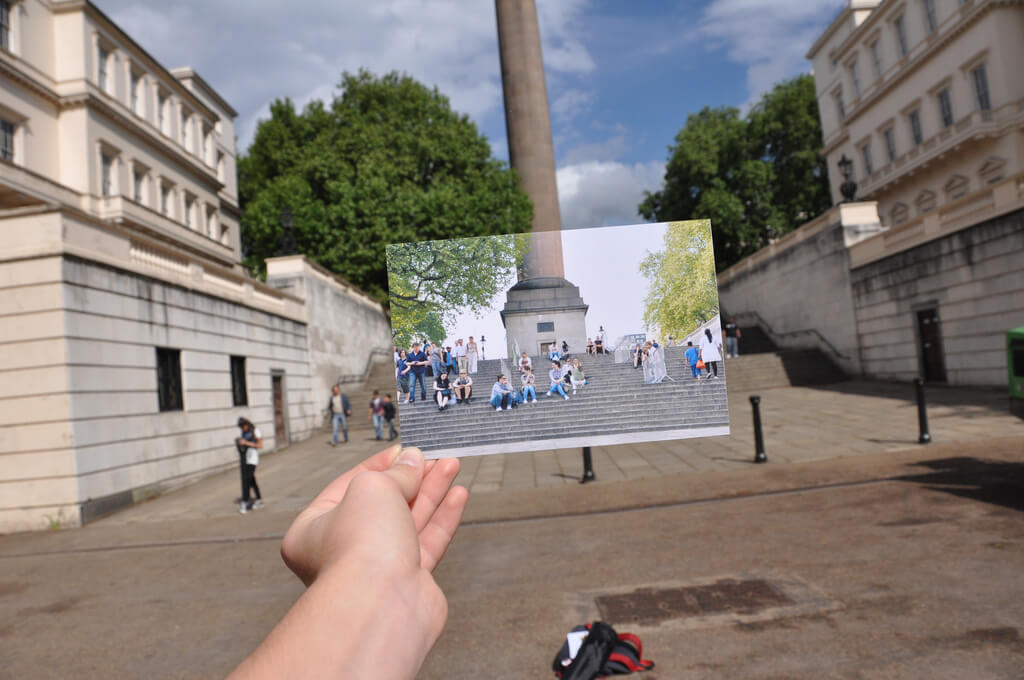 Like choosing good props, choosing the right location can make a big difference in your final photos. Nearly any place could technically work for a forced perspective image, but some places are easier to shoot in than others.

The most common problem is the presence of other people, crowding your shot and rushing you to be done. Besides giving you a time pressure, crowds can also throw off the composition of your shot and ruin the optical illusion. The easiest locations are free of crowds and have plenty of room to move around.

If you do want to shoot in a busy area like a popular tourist site, try to get there early in the morning when there are fewer crowds. Otherwise, plan to include the crowds in your photo. 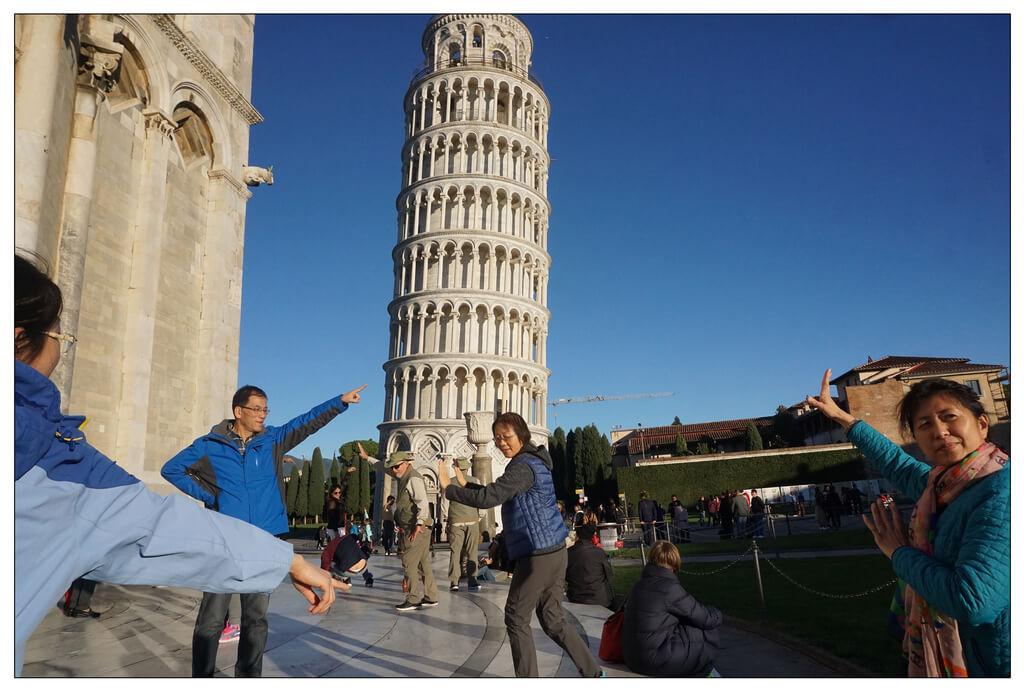 Think about composition ahead of time.

Composition is key for successful forced perspective. A composition that’s slightly off can make the optical illusion less convincing. That’s why thinking about the composition ahead of time can be a good idea. You don’t need to have every detail figured out, but you should have a general picture in mind for the composition.

This pre-planning, even if it’s brief, will help make the photo shoot go faster, as you’ll have a starting idea to work with. It might also make your composition better, since you’ll have more time to think about the overall look of your image. 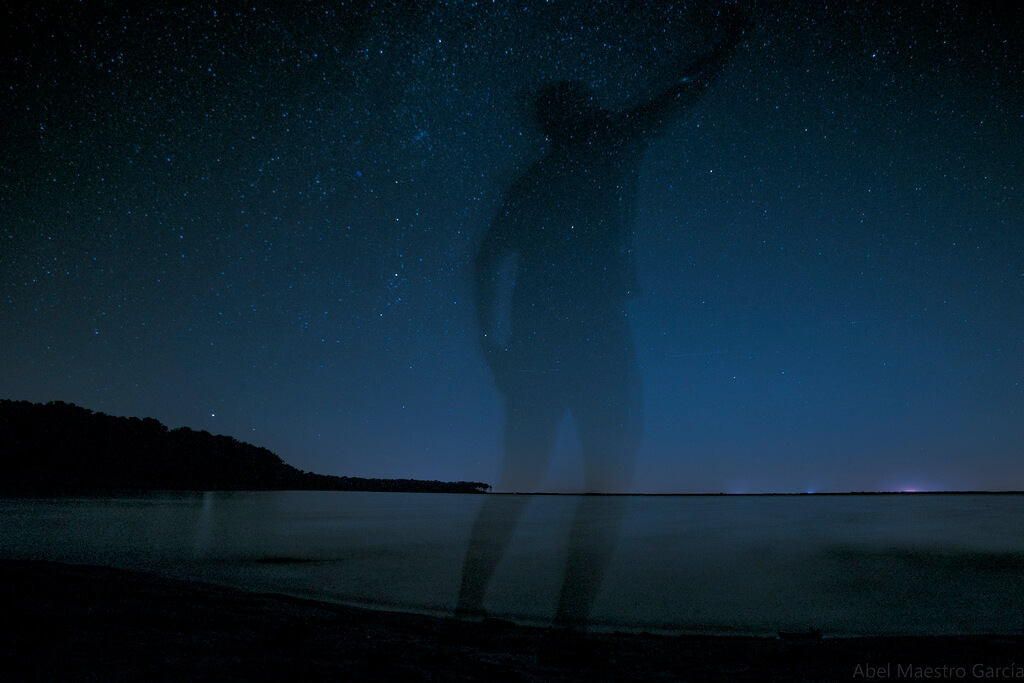 While planning is good, experimentation can lead to great shots, too. Once you’ve got the image you were planning for, take time to try out other ideas and angles. Move your subjects around, and try shots from below and above. You might discover that your original concept wasn’t as interesting as some of ideas you spontaneously come up with. 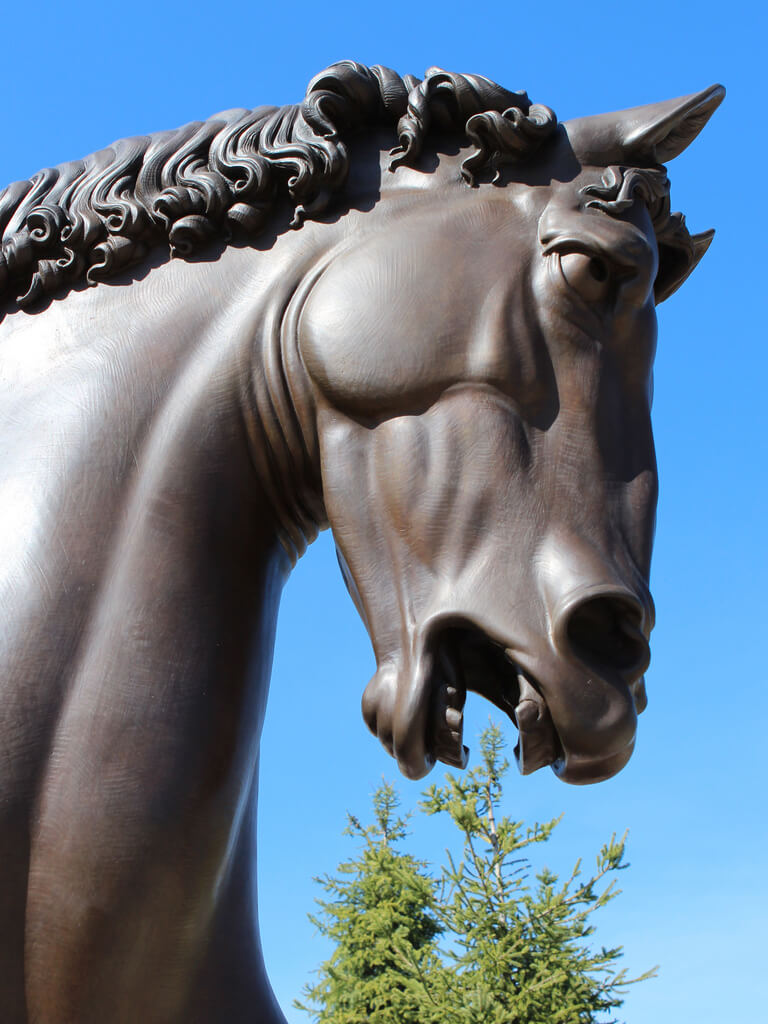 Use a narrow aperture.

You can get a nice forced perspective photo even with some blur, but if you can manage it, try to keep both subjects in focus. This will make the optical illusion more convincing.

The best way to do this is by using a narrow aperture like f/16. This deep depth of field should bring both subjects in focus, so they look equally far from the camera. 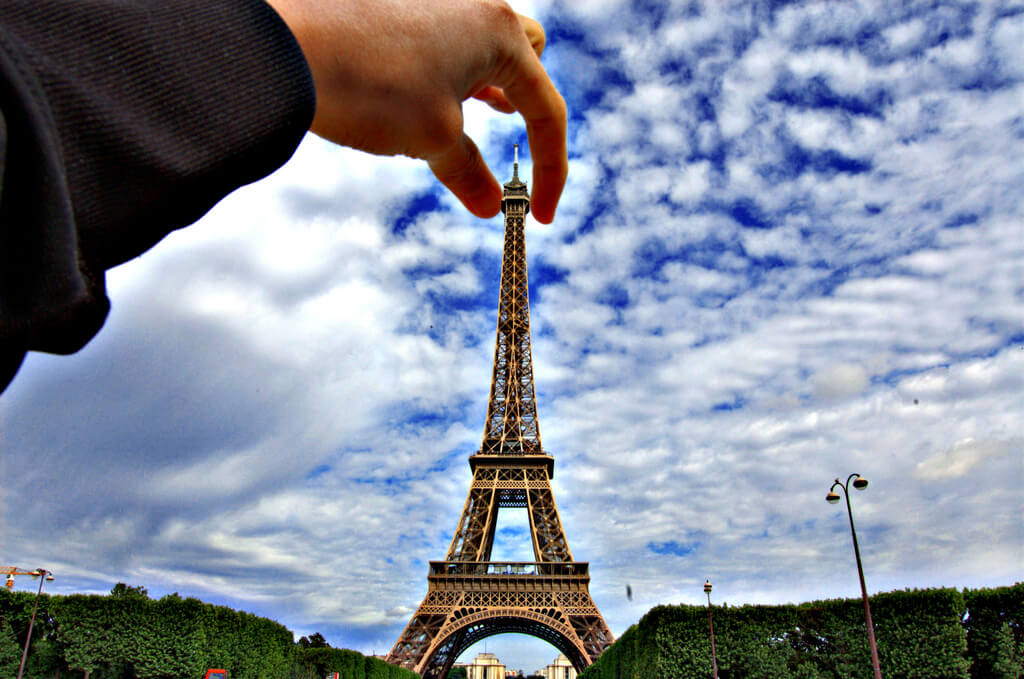 Simplicity is a concept we keep coming back to because it’s so important. Regardless of the genre or technique, it’s important to think about which elements in the frame are necessary and which you should remove. Keeping your image simple will make your image more effective – especially when you’re photographing something complicated like an optical illusion. 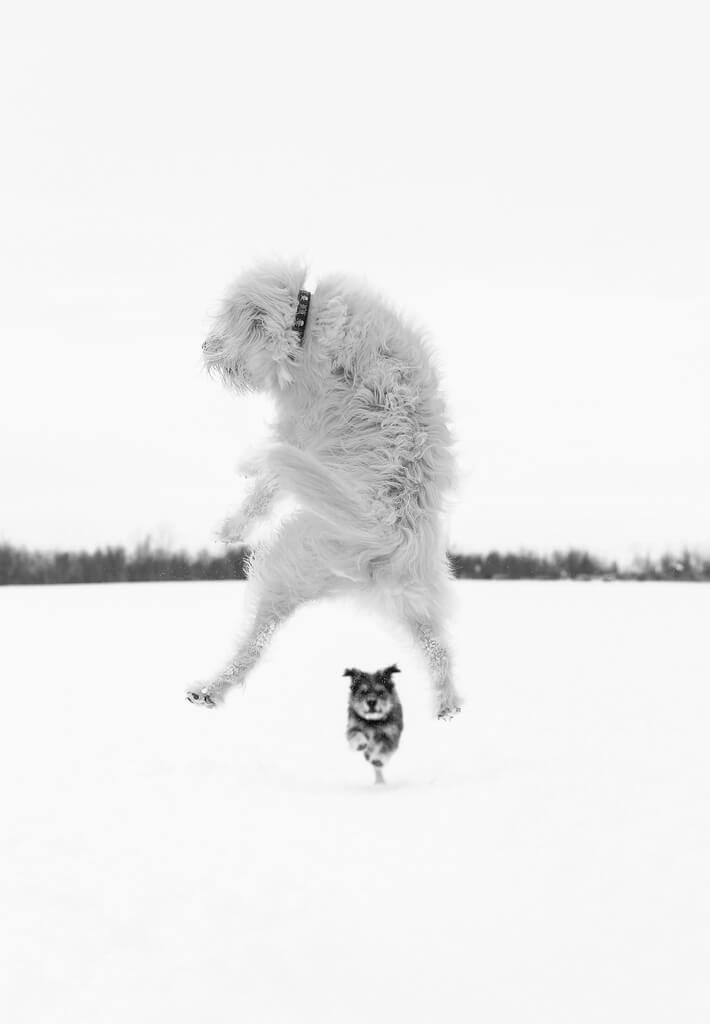 Forced perspective is one of the many techniques mentioned in our 2019 Photography Challenge. For more great techniques, check out the challenge!