As explained in a previous post by Chris Derrick, the histogram on your digital camera of a shot is a simple bar graph. This bar graph shows the distribution of the tonal values in an image, from total black on the far left to total white on the far right. The histogram is the tonal fingerprint on any image. There is no such thing as a “perfect histogram”: an image captured at night or in a dark setting will lean towards the left while a high key image ( a very bright setting) will lean towards the right.

In a photograph, tone refers to the level of brightness of each pixel. Each pixel has not only the color value but also the brightness value for each color attached to it. The arrangement of the tonal values across the photograph gives shape and the form across an image. The overall quantitative distribution of those tonal values across an image is represented in the histogram.

The Information in a Histogram in Detail

You can easily understand the correlation between the histogram (the bar graph) and the tonal values by looking at figure 1. The tonality is shown below the histogram and represents the tones between total black and white. The detail of this range is typically split into 256 discrete tonal values (from 0 to 255) per color channel.
As a side note: these discrete values, or steps represent essentially the 11 Zones (0 to X)suggested by Ansel Adams et. al. in the Zone system. Zone V (value 128) would represent the typical Mid-tone.

Keep in mind, that todays typical dSLRs record RAW files in at least 12 bit depth. That means, that the camera captures a tonal range of 4096 steps. 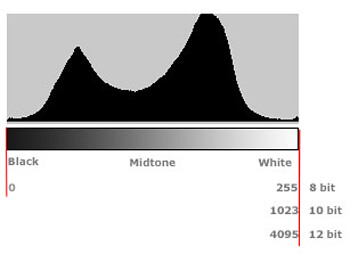 When Does it Pay to Watch the Histogram?

The short answer is: always. In every step from shooting to editing.

While shooting, the histogram of each recorded image gives you a quick indication, whether the shot taken is under- or overexposed. This will show in the histogram with a “spike” towards the left (underexposed, total black values containing no detail) or to the right (overexposed, total white values containing no detail). You would not want that, unless your artistic vision of a scene is telling you otherwise. In most cases you want to capture a well exposed photo where the histogram covers most if not all of the available range. This might make the image look dull and washed out on your LCD screen on the back of the camera. But this will enable you to perform sophisticated darkroom work without damaging the tones of the final image.

Think about it this way: The basic aperture theory says, that each time you stop down one full stop, you allow only half the light coming through your lens and reaching the sensor. Since digital sensors record the data in a linear fashion, this theory applies for the tonal range as well. The brightest “exposure stop” (all the data to the left of the midtone) contain half of the available tonal levels. This would be, for a 12 bit recording 2048 levels. One full stop less exposure means, you only have half that available which is 1024 levels. Another stop down cut this in half again, leaving you with only 512 tonal levels. The stop after that reduces it down to 256, followed by 128 down to 64 tonal levels in the deepest shadows By not filling the full range of the histogram while shooting you essentially are not only not utilizing all the tonality your cameras sensor is capable of recording, but you also give yourself a lot less tonal values to work with, since the sensor records (as explained above) many more tonal values on the bright side than it does on the dark side.

Essentially, whenever I shoot RAW, I will expose the image to the bright side, avoiding highlight clipping. Whenever I need to shoot JPGs (e.g. on vacation or on parties and family events) I will make sure that the recorded image resembles as close as possible the final result I want to achieve, but again, with exposing usually slightly to the brighter side.

The Advantage of High Bit Files

The second time you will want to pay attention to the histogram is during you photo editing work, whether you are using Photoshop, Photoshop Elements, Gimp or any other software that suits your needs – they all display a histogram.
As I said above, an 8 bit file contains with 256 tonal levels per color channel considerably less than your typical dSLR RAW file, which has 4096 tonal levels per channel. That being said, you should do as much work as you can with the cameras original 12 bit file.

When opening a 12 bit image in Adobes’ Camera RAW for example, it will treat it as a 16 bit file. That is great. Do as many global changes to the image as you possibly can in your RAW converter, like tonal and color corrections and the likes. This way you keep (most) of your original image data intact before you enter the 8 bit editing world for further adjustments.
What can happen if you do tonal and color corrections directly in an 8 bit file (e.g. Photoshop Elements lets you only work with 8 bit files. A JPG would also only be editable in 8 bit) is shown in figure 2. Have you ever encountered such a histogram and asked yourself what that means?

This histogram was achieved by doing a very slight level adjustment to a 8 bit JPG file. What happened is simply that tone values have been lost. Destroyed. Gone for good. Vincent Versace calls that “breaking pixels” – a description I really like. Another good comparison for this occurrence has been described as the “Vegas Syndrome”: Imagine you are going to the Black Jack table in Vegas with $256 in you pocket. After a while you have lost $75. That is very bad – it is essentially 30% of your gambling budget. Going to the same table with $4096 and loosing $75 is not such a big deal – it is considerably less, isn’t it? You still have plenty to play with.

This is now all very left brained theory. In the end, it always comes down to your very own artistic view of the world you photograph on how you expose an image. But keep some basics about histograms in mind, and you will have more fun with your final photographic prints.