Common starlings are medium-sized birds that can look dull at first glance. They’re not colorful enough to attract attention, and they’re not large or dark enough to create striking silhouettes like ravens do.

However, what they lack independently, they make up for when they fly together in a swarm. Then, they become an incredible mass of movement that’s eerie and beautiful to watch. If you’ve never seen a swarm of starlings (called a murmuration), it’s worth putting on your bucket list – or at least watching a video of it. Check out this 2-minute film of a starling murmuration from National Geographic. 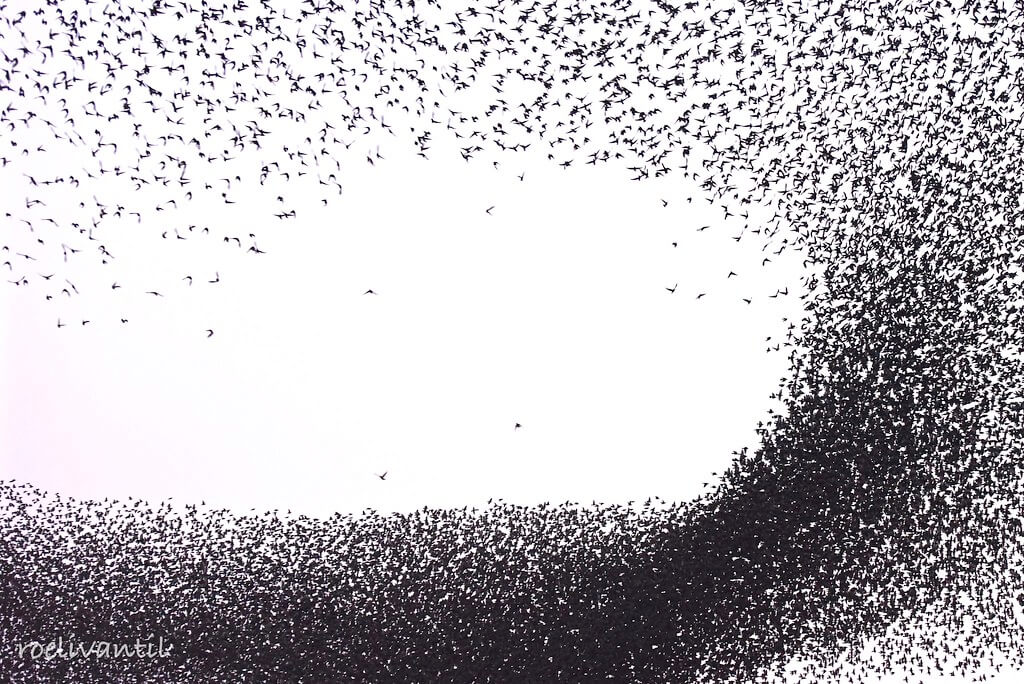 Originally from Europe and Western Asia, starlings are now in many parts of the world. They adapt easily to new habitats and are especially drawn to places with sheltered areas for roosting, like cliffs, forests, and buildings. In fact, some of the biggest murmurations are in cities and towns, which offer plenty of spots to roost.

Some groups of starlings have “only” a few hundred birds, while others are truly massive with millions flying in formation. Sometimes, there are so many starlings that they block the sunset. That’s why, in southwestern Denmark where starlings often gather, a murmuration is called a sort sol (black sun). 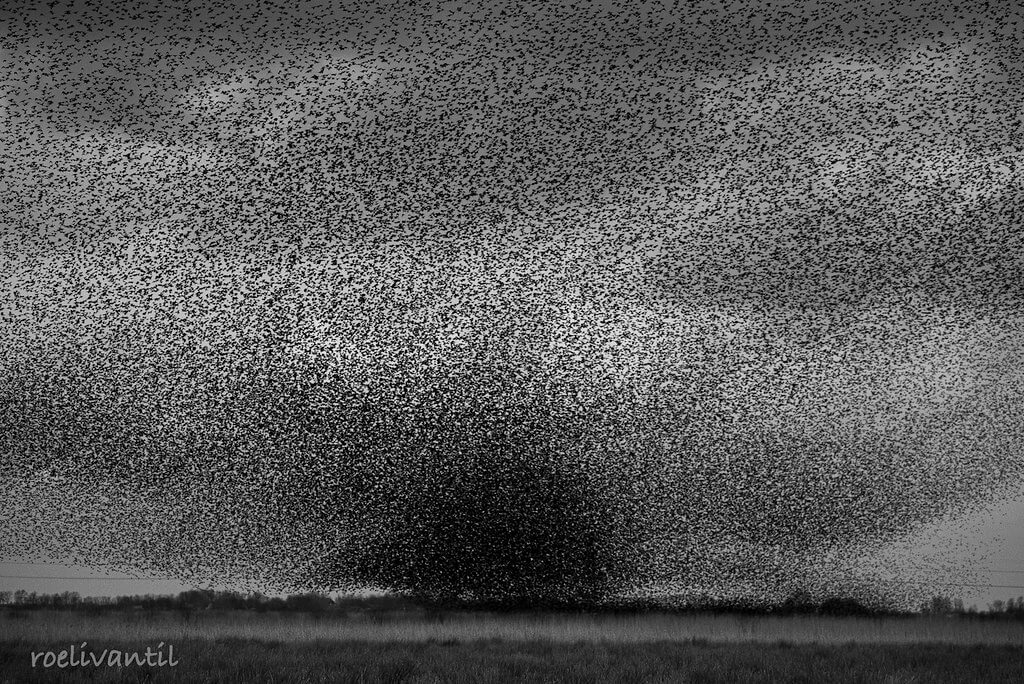 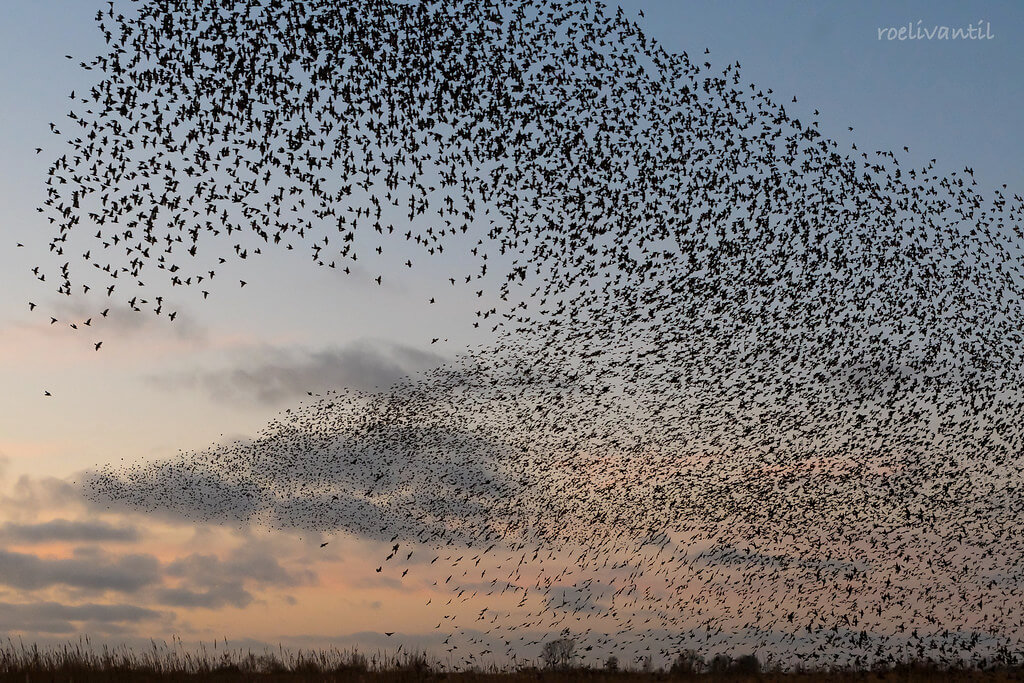 Due to the large size of their flocks, starlings don’t hang out together all day. They mainly gather in the evening to roost together for warmth, socialization, and safety. Their murmuration confuses and throws off predators, as shown in this 3-minute film of starlings in Rome, evading a peregrine falcon.

Of course, predators aren’t the only ones that can get confused by starlings. Photographers, too, can have trouble getting good shots of murmurations. One photographer who has managed to get a lot of cool shots is Roeli van Til from the Netherlands.

Roeli lives in Friesland, a province where many starlings live during the winter. On the northeast side of her town, a flock of starlings gathers every evening during winter and early spring. Three years ago, she and her husband decided to start photographing these starlings, just 10 minutes away from their home. 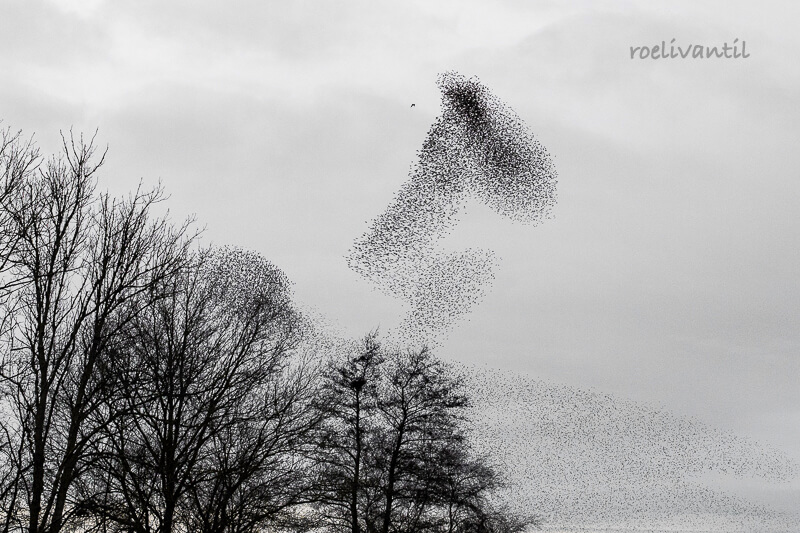 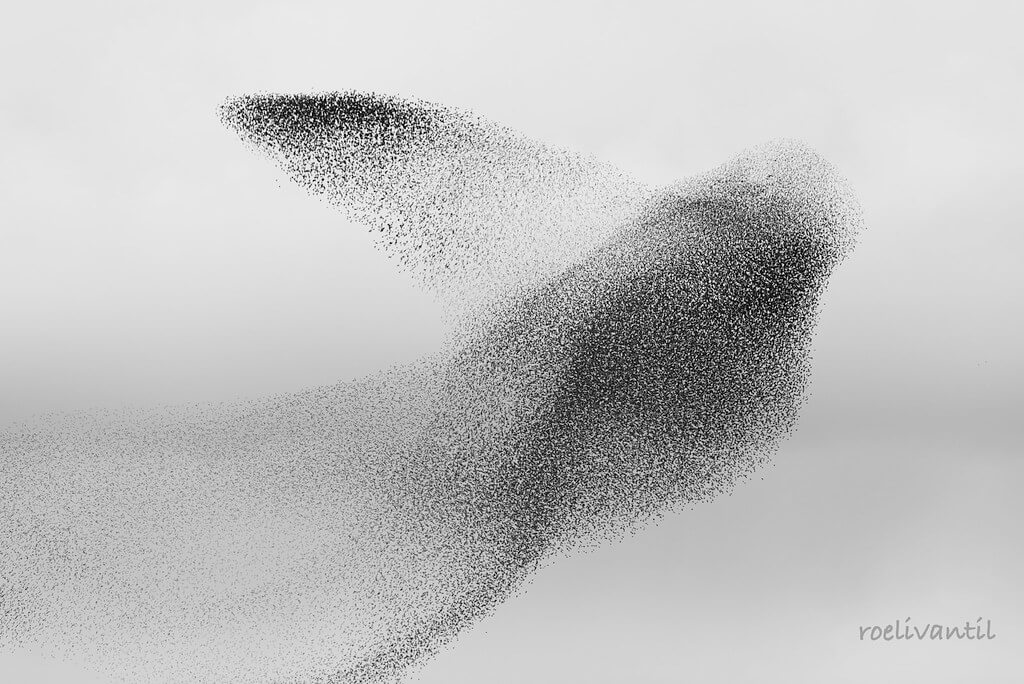 The starlings start to gather about an hour or half an hour before sunset, Roeli says. If the weather is beautiful, they first sit on the power lines close to town. Then, about 15 minutes before they roost in the reeds, or if a peregrine falcon is hunting them, they start flying in formation. This is the best time to photograph them.

To get nice shots, she uses a telephoto lens at a distance and a wide-angle or 100mm lens for close by. This combination of lenses allows her to photograph the birds regardless of where they fly. She also uses a fast shutter speed, since the starlings move quickly, and compensates for the low lighting by increasing her ISO. 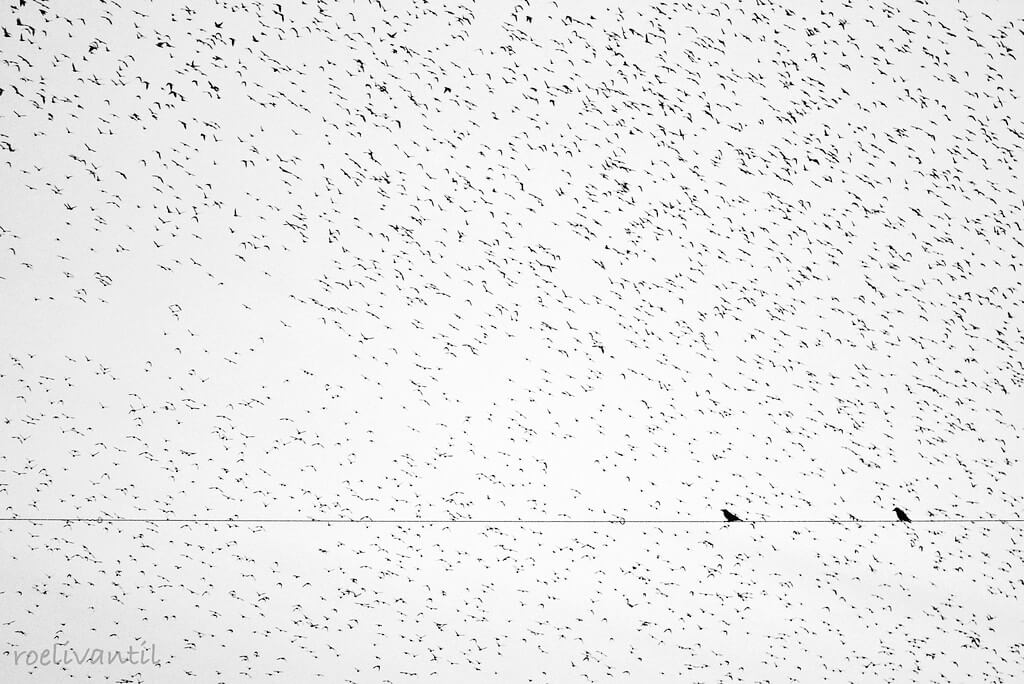 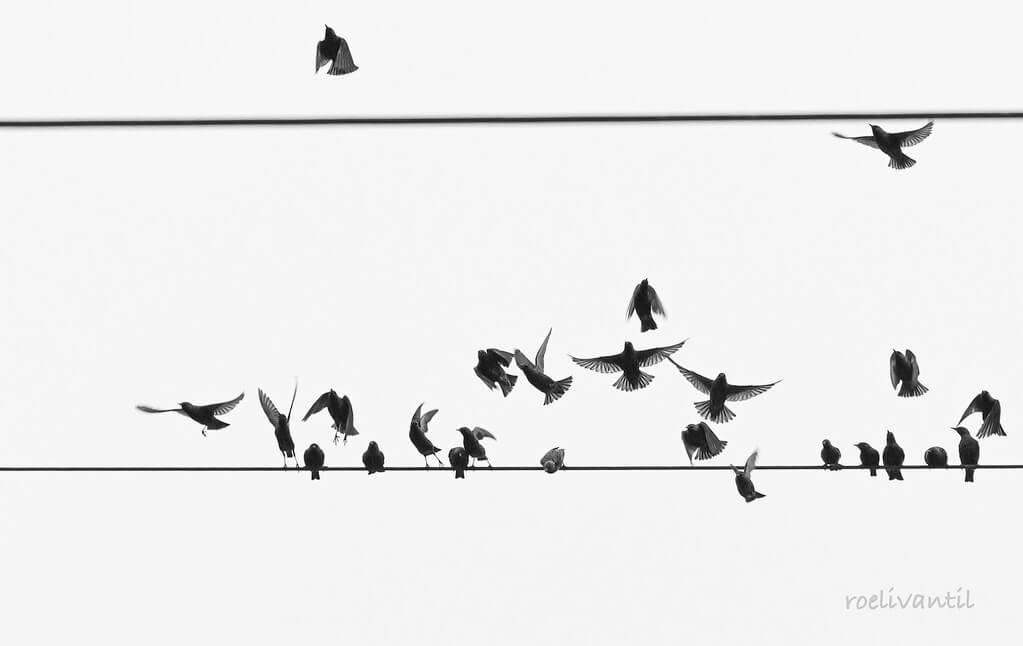 Though Roeli has been photographing nature for 8 years (originally inspired by her photographer husband), her experience photographing starlings has opened up a new area of interest for her. She’s mainly been drawn to macro photography, but slowly, she’s noticing and photographing birds more now, too.

In fact, her favorite photos of the starlings were taken at a distance, as they show the swarm’s massive size. “It’s difficult to capture in a photo what you experience in the field when they fly over you,” she says, but that feeling is best captured from far away, not close up.

In this way, a single decision to try something new – to go out and photograph a subject you’ve never shot before – can lead to a whole new area of interest and set of experiences. Like Roeli, you might start with one outing or photo you’ve never done before, and find yourself three years later with an album of unique shots and cool experiences you otherwise wouldn’t have had.

To see more of Roeli’s photography, visit her Flickr photostream. 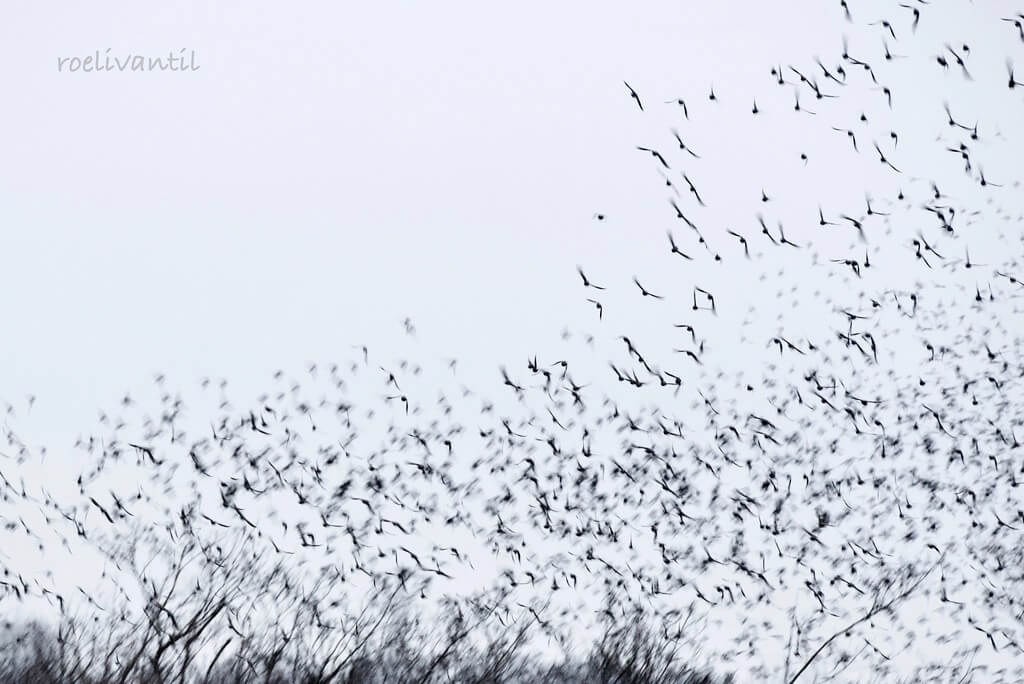 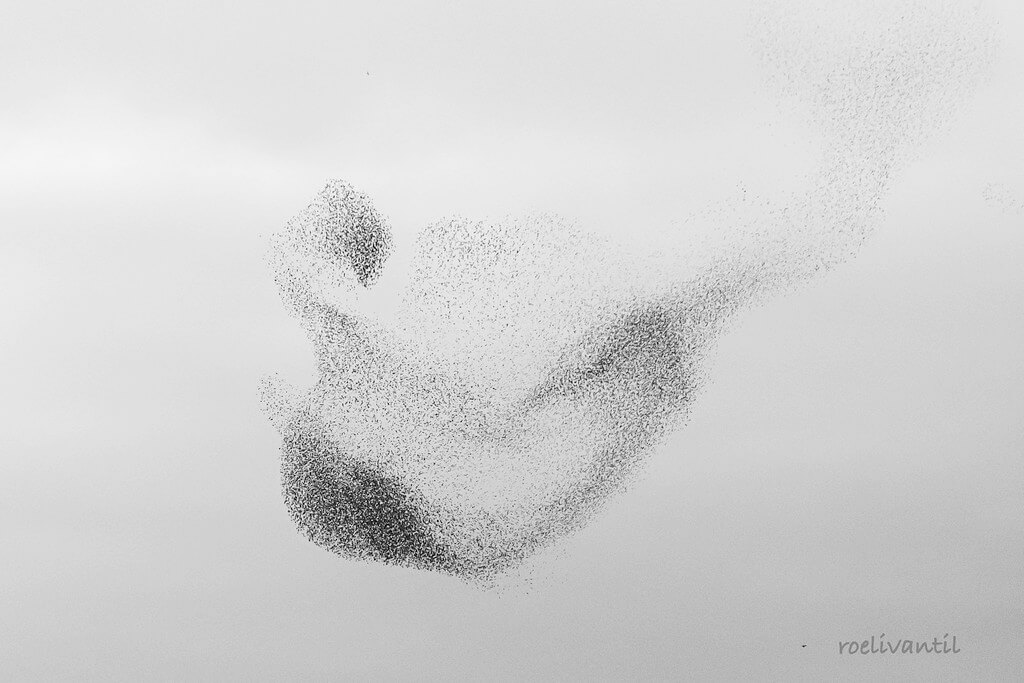 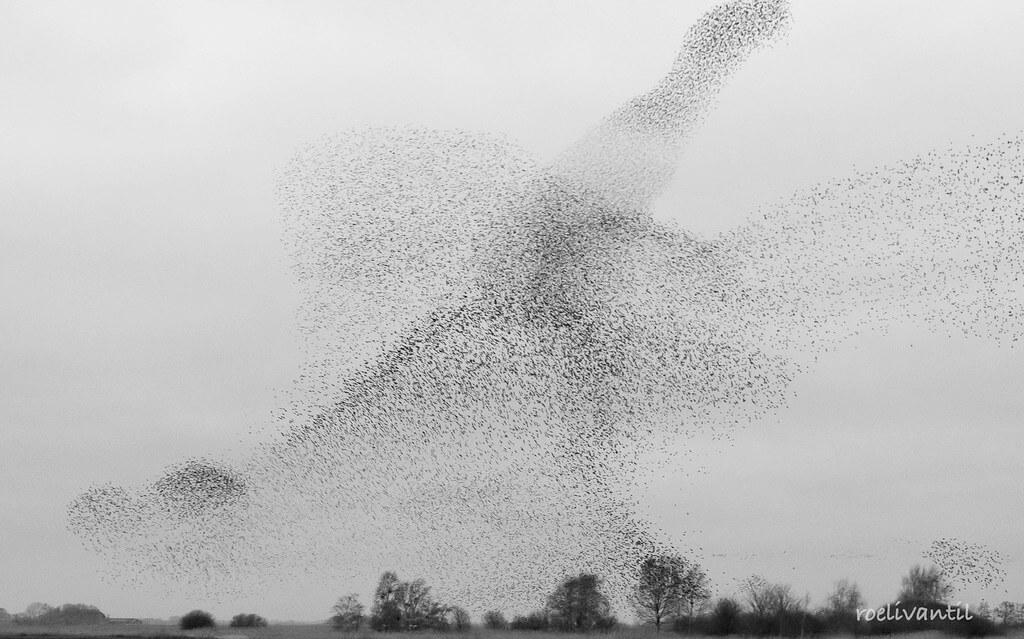 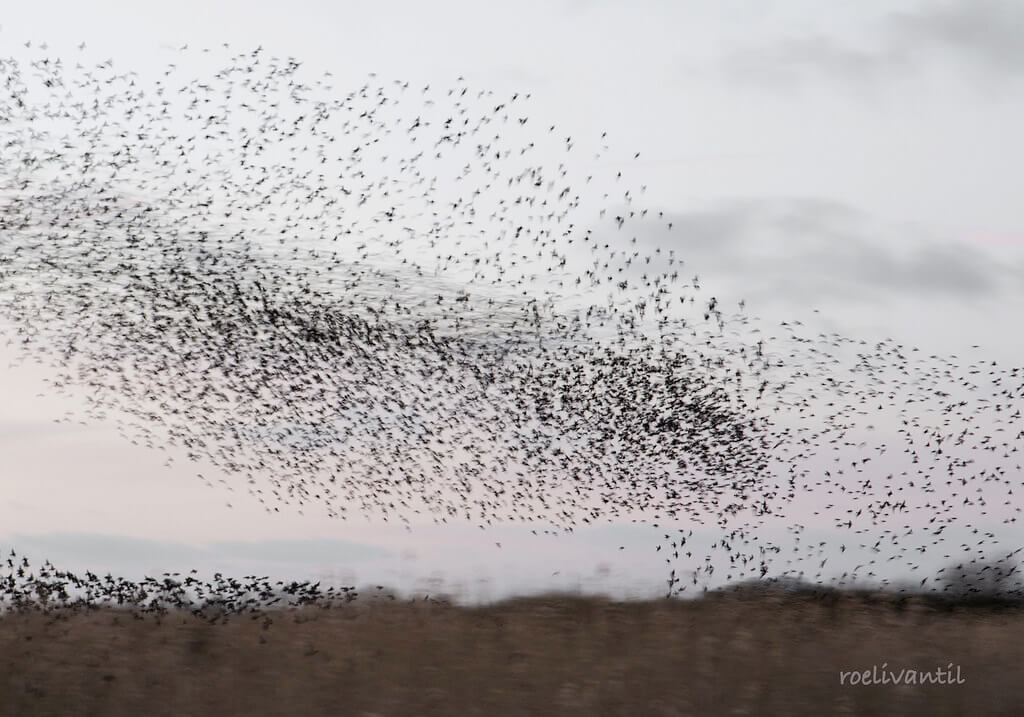 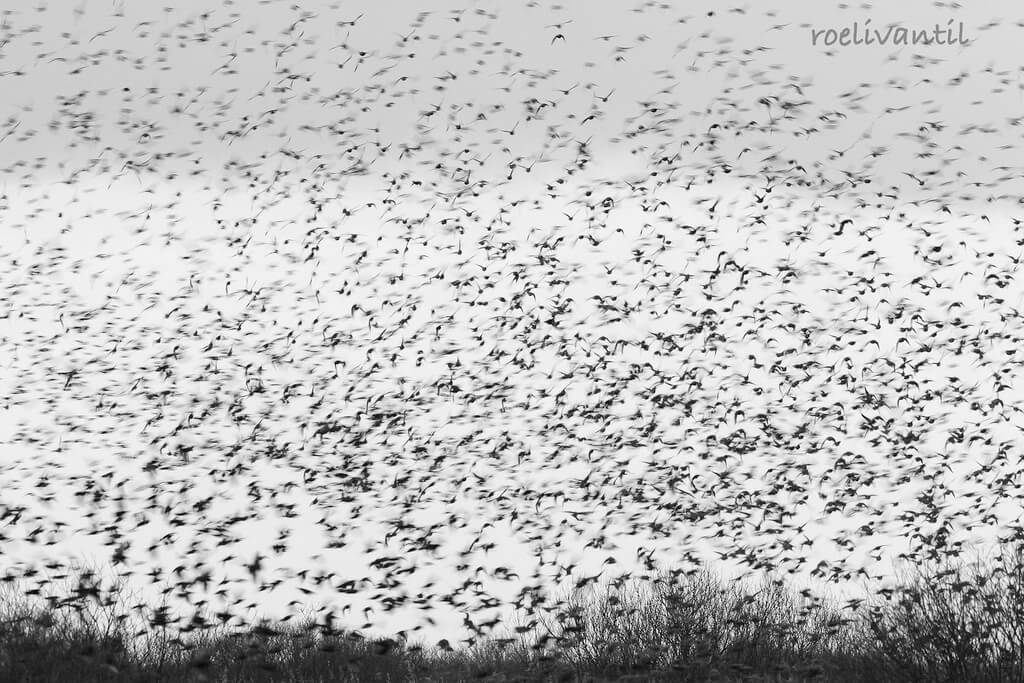 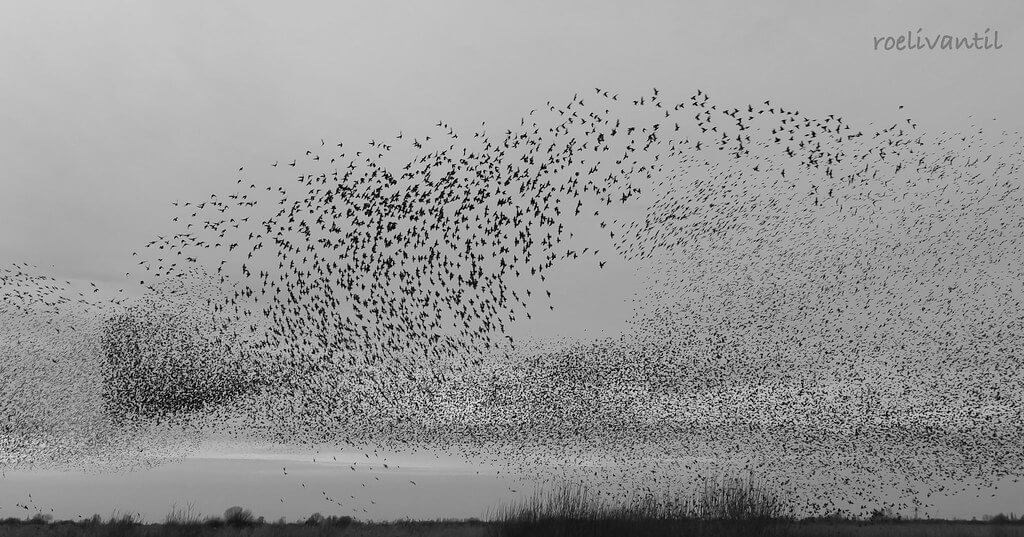 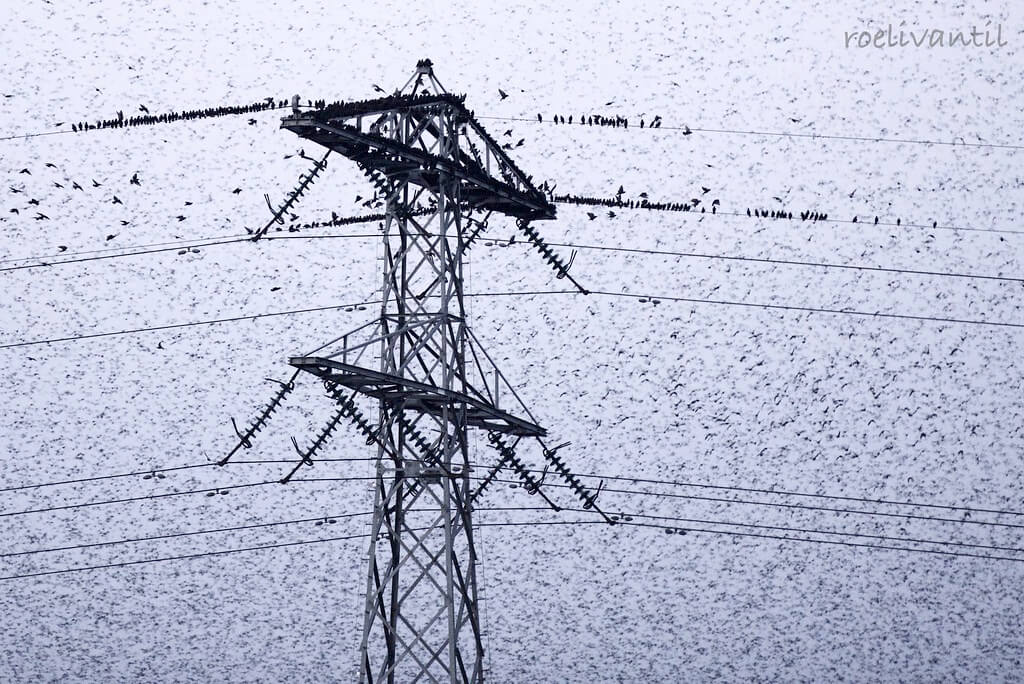 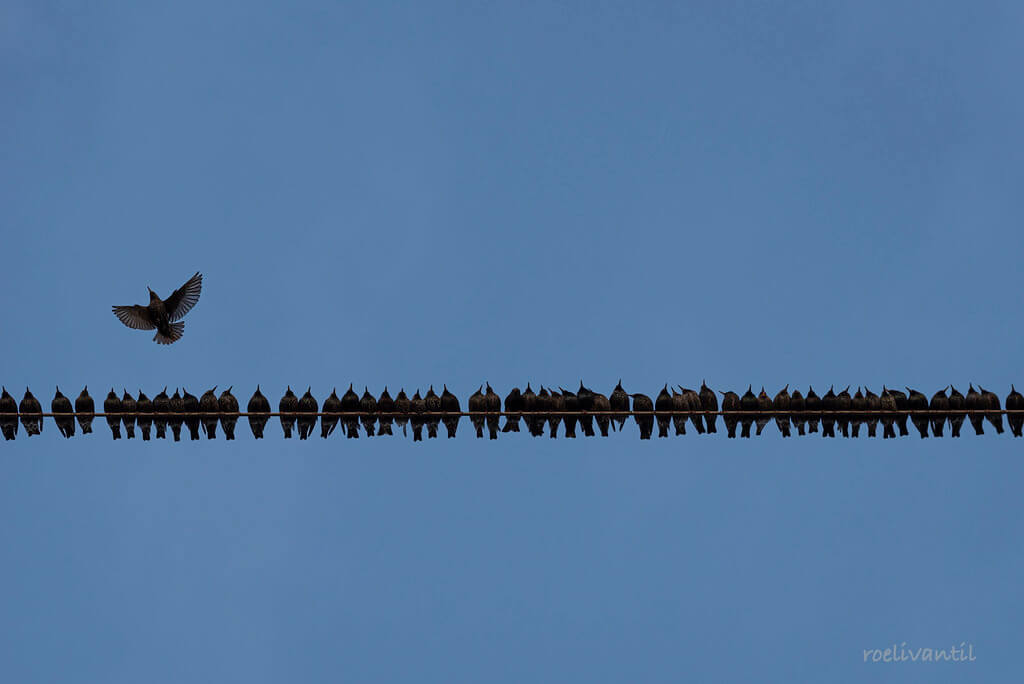 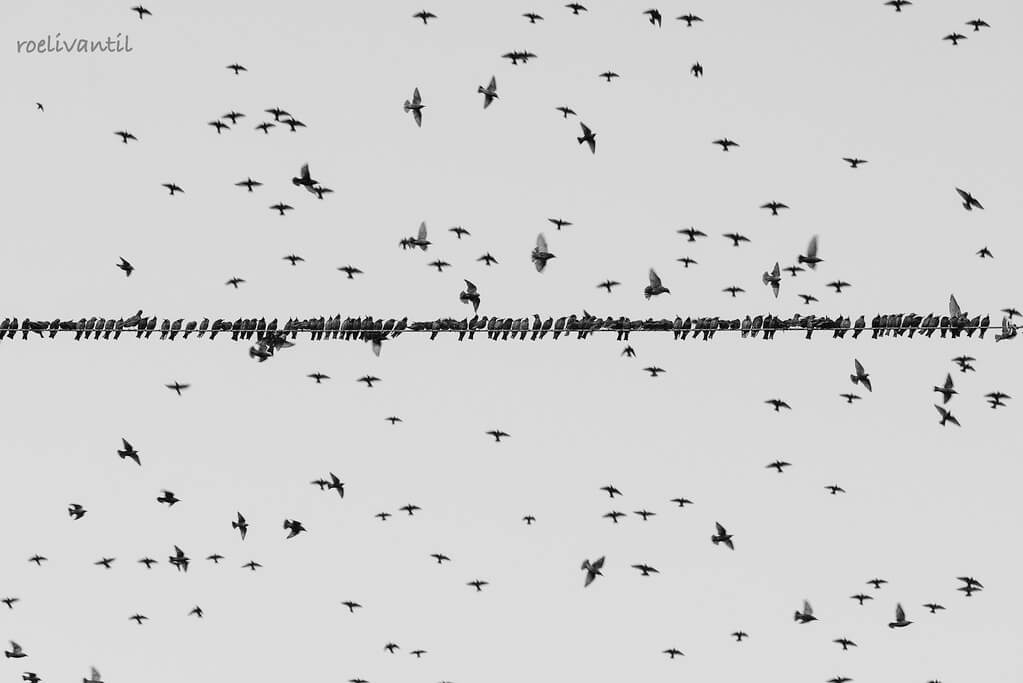 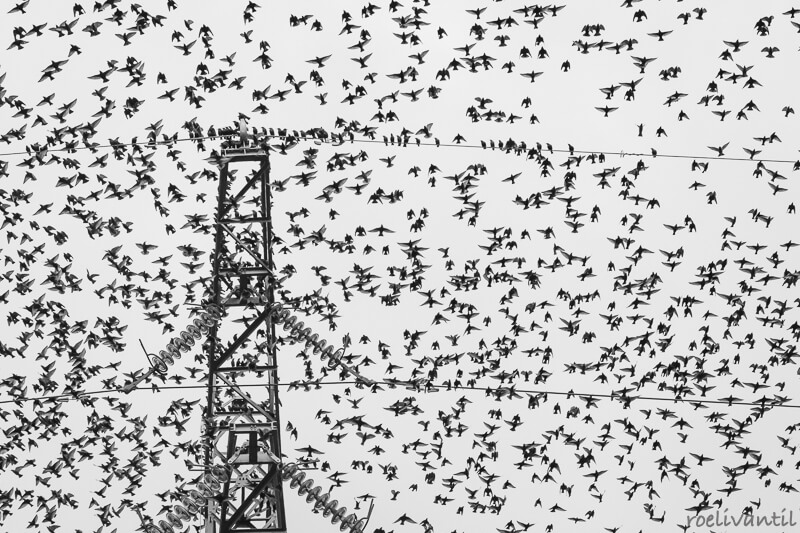 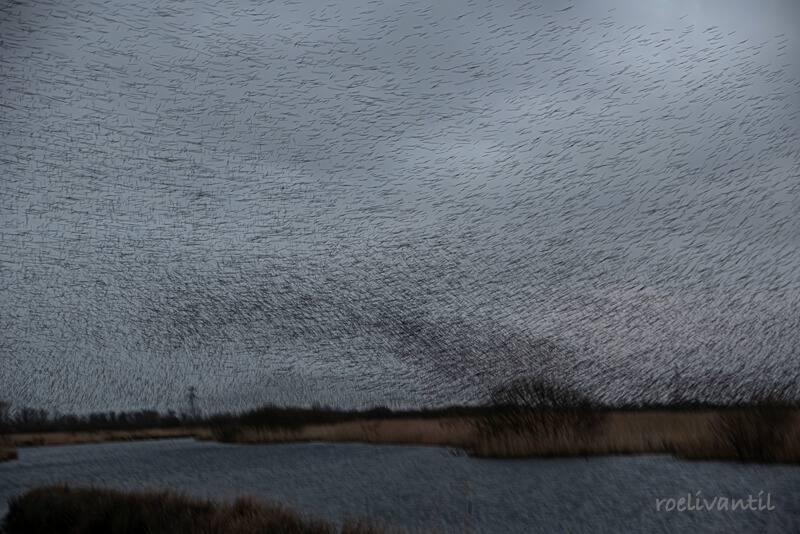 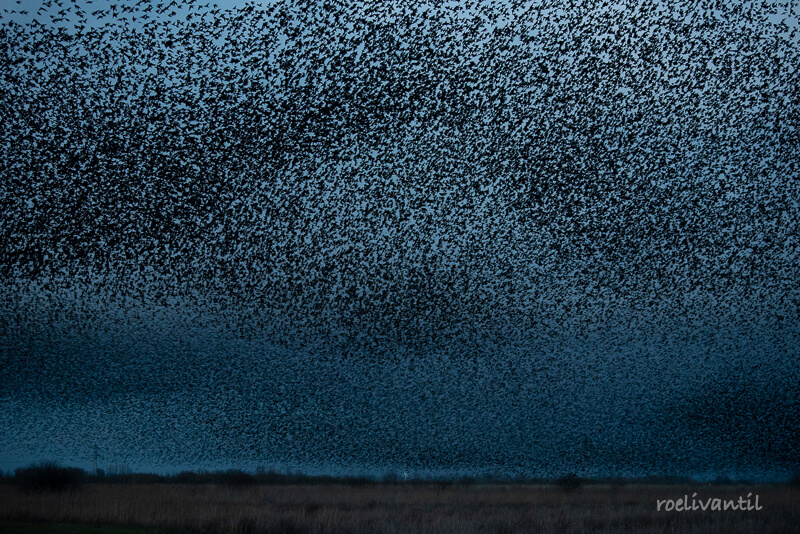