If you love traveling, being outdoors, and pushing yourself physically to capture places that none have photographed before, you might enjoy a career in landscape photography. To show you what’s possible, we’ve put together a list of 25 excellent landscape photography portfolios from professionals currently working in the industry.

The photographers in this list come from a variety of backgrounds and have taken different career paths. Some started traveling and taking photos from a young age; others jumped into photography from a different career. Each has a unique style and way of generating income, whether through photo tours and workshops or commercial shoots and social media promotion.

Despite their differences, they all share one thing in common: a spirit of adventure and a determination to get incredible images of nature.

Although Daniel has a background in physics and art, he’s always loved being in nature, hiking, and mountain climbing. In university, when he wasn’t working on quantum physics, he was often outdoors guiding tourist groups and leading photo workshops.

Now, he’s made a career out of being in nature and taking landscape photos. His work has been published in prominent magazines like National Geographic, and he’s worked with clients like Apple and RedBull. He also has nearly a million followers on Instagram. He spends most of his time either in the Lofoten Islands, Norway, or in Tuscany, Italy, guiding groups from Russia, Asia, Europe, and the US.

Kate is a former professional skier turned world traveler and acclaimed landscape photographer. Though she also shoots weddings, portraits, and travel photos, she’s most well-known for her unique way of capturing landscapes in neutral tones. Her style has been described as “luminous” and “etherial,” creating a sense of peacefulness that’s perfect for hanging on a wall.

Besides shooting landscapes, Michael also works with timelapses and aerial films to create a diverse portfolio of outstanding work. He’s been a professional photographer since he was 16 and has created a name for himself through his distinct surreal style. His clients include significant brands like Google, Nike, and Facebook, and he’s garnered quite a following on social media with his breathtaking shots of nature.

Many landscape photographers try to capture scenes that are free of people, but in Elizabeth’s work, people are what make the landscapes so compelling. Her fairytale-like landscape portraiture has not only brought her notable clients like Sony and Air New Zealand, but also been a big hit in the publishing industry. Her images have been on the covers of more than a dozen books, including best-selling authors like John Grisham.

Based in Frankfurt, Germany, Daniel travels to the remotest parts of the world following his passion for exploring and experiencing nature. He’s built up a significant following on Instagram, which has allowed him to become an OlympusXplorer – a promotional campaign that equips talented photographers with Olympus gear and sends them on projects worldwide.

Like Daniel, Giuli is an OlympusXplorer who’s passionate about experiencing and protecting the beauty of our planet. Based in Northern Italy, she grew up surrounded by the Italian Alps. The Dolomites were one of her first photography subjects, and she’s continued to photograph breathtaking mountains and lovely landscapes ever since. 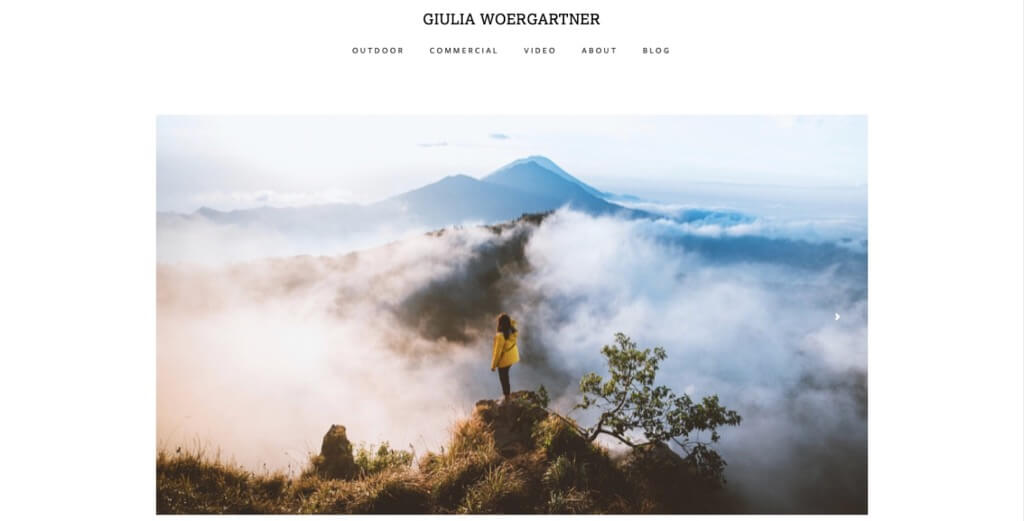 With nearly 800k followers on Instagram and over 90 previous clients, including brands like Google, Fjallraven, and IcelandAir, Callum is one of the most influential landscape photographers on this list. Besides capturing stunning natural scenery, Callum’s main aim as a photographer is to inspire an appreciation for nature and a desire to protect its beauty.

Lisa’s career in photography was launched when she won a Lonely Planet writing competition that sent her on a trip to Morocco. Though she had some experience with photography at the time, her main goal was to become a journalist. That goal changed after Lonely Planet asked her to do a photo feature, and she loved it.

Now, she’s a travel, landscape, and underwater photographer with a distinctive, dreamy style. She’s specialized in hotel photography and is also the founder and lead editor of an online publication called The Wandering Lens, which focuses on tips and travel guides for photographers.

Despite growing up in The Netherlands, where landscapes are mostly flat, Max has a deep love for the mountains and travels often to capture them. His first big break in the photography industry came in 2015, when he stopped his studies to travel around the world, photographing mountainous landscapes in countries like Nepal, Chile, Greenland, Scotland, Norway, and New Zealand.

His dream was to win the IPA awards – and that’s exactly what happened! After this success, he felt confident enough to drop the student life for good and transition into professional photography. His career has only excelled since then.

Sarah is one of Australia’s leading landscape photographers. Her schedule is packed with commercial shoots and photography workshops, and her sponsors include big brands like Nikon Australia, Lee Filters, and F-Stop Gear. Though many of her workshops are held in Australia in New Zealand, her portfolio includes shots of scenic locations around the world.

Colin is one of the UK’s top landscape photographers. He’s worked on calendars for British Airways, had several solo exhibitions, and published a handful of books, particularly about Scotland. He also frequently leads workshops around Scotland, covering gorgeous, rugged areas such as the Assynt, the Isle of Skye, and the Isle of Harris.

Stas is an aerial landscape photographer based in Moscow, Russia. As aviation enthusiast, he primarily uses helicopters or light aircraft to take aerial photos, only occasionally using a drone. By using a Cessna instead of a drone, he’s able to compose and capture spectacular photos. His favorite place to shoot is Iceland, but his portfolio includes many other countries and locations.

Erin began taking photos as an art historian, shooting archaeological sites and museums for research and educational purposes. This path into photography through research and academia has given her a unique perspective on photography. She’s become a notable landscape photographer, but also a leading educator on photography, known for the way she blends art, history, and philosophy with practical instruction.

Alexandre takes his inspiration from a mix of art, music, and literature. His list of influences include photography masters like Ansel Adams, but also authors like H.P. Lovecraft and J.R.R. Tolkien and Romantic painters like William Turner and Caspar David Friedrich. His work and creative process have been featured in an award-winning film by Mathieu Le Lay called La Quête D’Inspiration (The Quest for Inspiration), worth watching if you have an affinity with Alexandre’s style.

Tiffany works as both a dentist and a professional photographer, shooting landscapes when she’s on adventures and traveling internationally. Besides working with brands such as Sony, Amazon, and Apple, she leads week-long destination workshops, combining travel and adventure with valuable photography lessons.

As a colorblind photographer, Kilian views landscapes differently than many photographers. Instead of focusing on tone, he concentrates on patterns and structure, creating images that are artfully composed. He especially loves photographing harsh alpine landscapes and remote rural areas, nestled against mountains and forests.

Victoria’s work is heavily influenced by the beautiful, rugged environment of British Columbia, Canada, where she lives. She likes to shoot a variety of genres to stay creative, but landscape is one of her mainstays. She’s a regular contributor to Outdoor Photography Canada, and her work has also been featured in numerous other media outlets, such as Outdoor Photography, Digital Photo, and Photo Life.

Cuma is a Turkish landscape photographer with a background in painting. He picked up photography during university and continued to shoot beautiful landscapes after graduating. He’s a big traveler and organizes trips for photo enthusiasts around the world, with destinations like Italy, Vietnam, and the Faroe Islands. Wherever he goes, he comes back with dramatic, dream-like images, clearly influenced by his background in art.

Ted is a California-based landscape photographer who spends a lot of time in the wilderness, trekking mountains, hiking trails, and capturing epic scenes. He describes his work as “imagery” rather than “photographs” because of how much technology he uses in his workflow. He approaches photography as a metaphor to show how he experiences nature, “a manifestation of my mind’s eye, not just documentation.” The results are beautiful.

Charlie worked for ten years in British theatre and television before switching to photography. Though he’s now worked as a professional photographer for over 30 years, that theatrical background has given him a different view of light and shadow in photography. Each image in his portfolio seems carefully crafted as a work of art in composition, color, and lighting.

Chris is a diehard traveler who combines his adventures with powerful landscape photography. Many of his images on Instagram are posted with stories, thoughts, or insights based on his experiences traveling. He’s also a surfing enthusiast and has given a TED talk about surfing in ice-cold water – accompanied by plenty of incredible photos, of course.

Mikko is a Finnish fine art photographer who loves capturing landscapes at night. His photos often have simple compositions, full of beauty and atmosphere. Snow, fog, Northern Lights, and star-packed skies are common subjects in his portfolio of stunning images.

Originally from France, Thierry lived in New York working for the fashion industry before he made the jump into professional photography. He now lives in China, where he’s made a career of leading photography workshops and capturing impressive landscapes in the country.

Based in Banff, Canada, Paul has a passion for exploring and capturing remote, “under-documented” landscapes. This means traveling to places like Antarctica, Svalbard, Baffin Island, and the Torngat Mountains. He’s visited every province and territory of Canada, hiking in the backcountry and capturing vistas that few have seen.

Jarrod is an Australian landscape photographer who loves the Golden Hour. He’s traveled to over 45 countries, capturing landscapes during those minutes of perfect light around sunset and sunrise. He’s also an expert at photographing the Northern Lights, chasing their beauty while leading photography tours in Iceland and Norway.