Whether you’re traveling to exotic locations or just walking around your own neighborhood, beauty, art, and creative opportunities exist all around us.  In fact, some of the best photos feature stories and collections of images from every day situations. Photographer, Michael Yuan, combined his passions of photography and basketball into a wonderful series of photographs that he calls “Urban Courts,” which features artistic pictures of basketball courts in and around the San Francisco Bay Area.  Has was also kind enough to answer some interview questions for our readers.  Enjoy the images and the inspiration below.

I like playing basketball in my spare time! When I was living in San Francisco, I went around searching for an outdoor basketball court to play at. The photo that started this project was this one – a count I went to regularly at the time. I noticed that courts in the city were often placed in unconventional places, which I’d imagine it’s due to the density, making people get creative with where they build courts. But, I later found that even in less dense places, there were courts placed in unconventional places! Growing up, I’ve always had the assumption that basketball courts were in open spaces in schools and parks. I found it interesting where people put basketball courts and wanted to find every uniquely placed court. 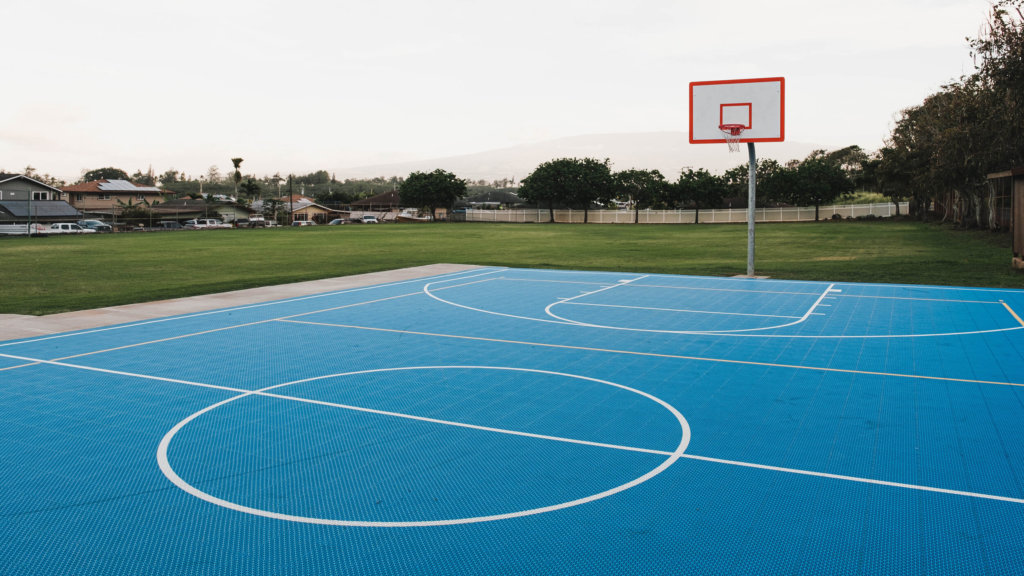 Basketball courts are familiar objects which maybe make it boring by itself, but I think it’s the context of each photo that gives it life. Additionally, I find it easy to create compositions with basketball courts since the shapes of basketball courts are rather simple. It also creates a solid visual common ground that ties all the photos together. In general, my photography philosophy is to make the familiar unfamiliar. Ernst Haas puts it best – “I am not interested in shooting new things – I am interested to see things new.” 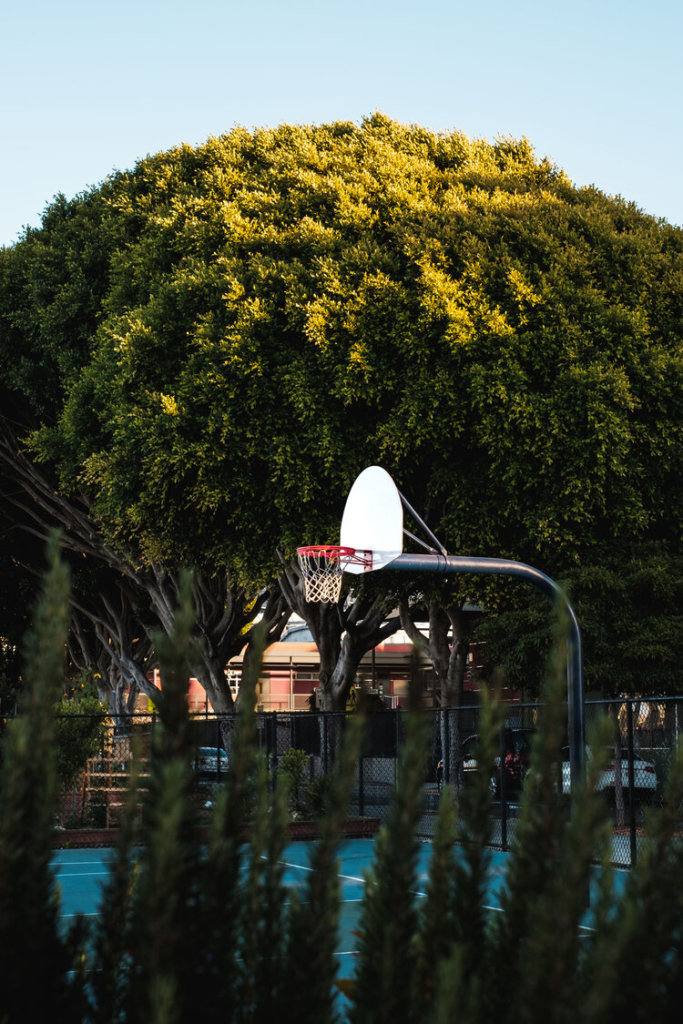 What is the biggest challenge in the creation of these photos? 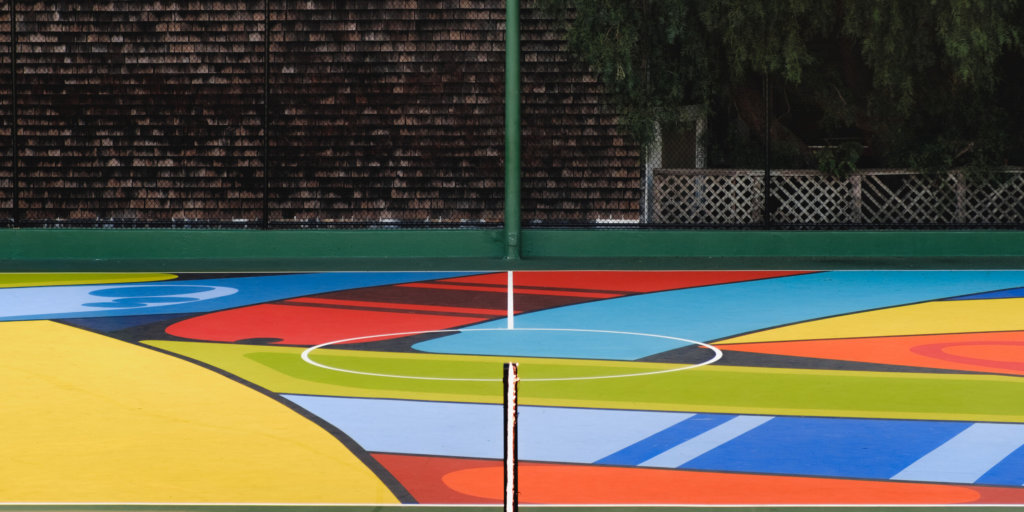 I would have to say location scouting and traveling there. Unlike the Golden Gate Bridge project I did, every trip to a court usually results in only 1-2 photos. It’s the variety of locations that makes this series interesting. This makes traveling and location scouting very tedious. Sometimes when I’m bored I just search for basketball courts around me on Google Maps or even manually searching by using Google Maps satellite view. Every time I go out, I’m always on the lookout for photo locations I can return to, both for this project and other projects. There were many times where I’d drive out to a court anticipating photos I can add to the collection, but come home empty-handed. But I guess that’s just photography in general, just have to keep going out!

What cameras, lenses and lighting gear were used to create the photos?

Do you have a favorite photo from the series? If so, what is it and why?

It’s very hard to pick favourites!
For this one, it’s like the epitome of “Urban Court” – high rise, overpass, solid concrete, strong structures. 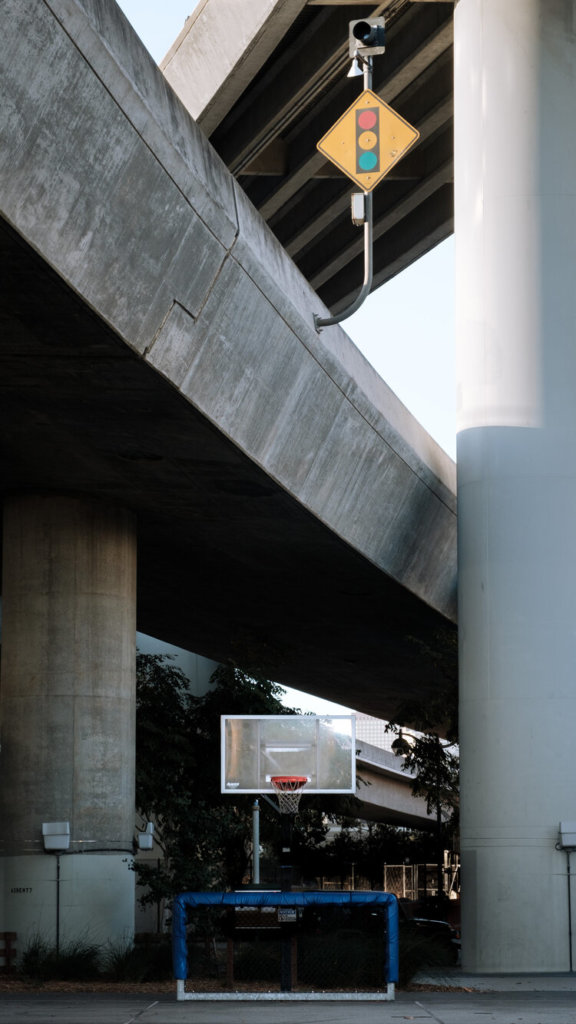 For this one, I love the lighting of the scene combined with the focal length. It’s on a one-way street with parking – it looks so tight, how do you even play here? 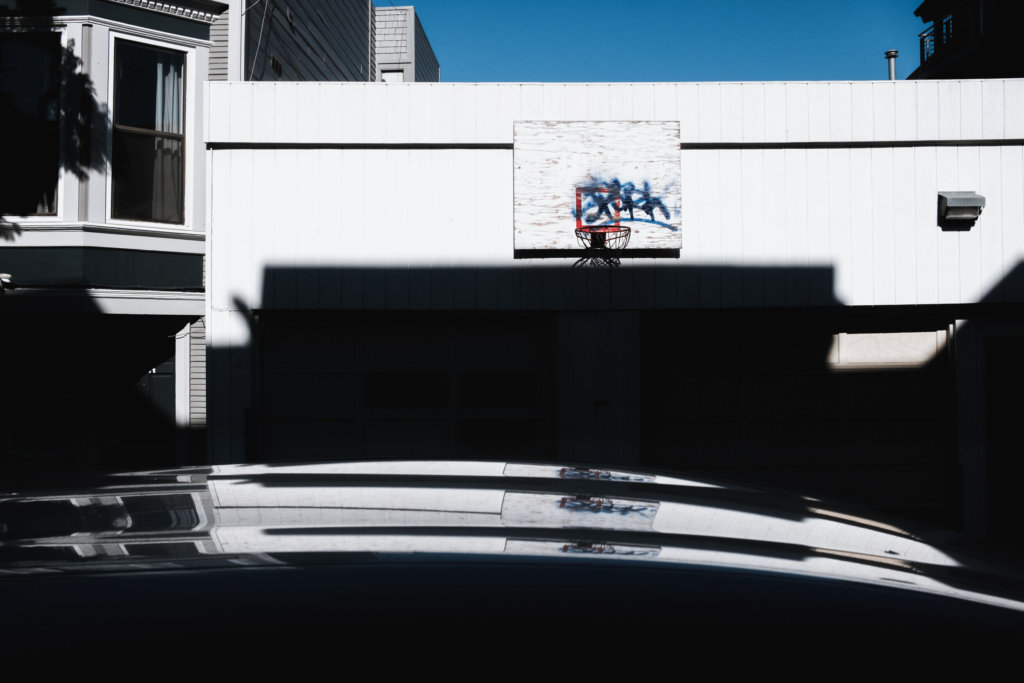 For this one, it’s very abstract and simple, but the colors are beautiful, especially since I went when it seems to be relatively freshly painted. The simple line implies the center line of a basketball court. This shot gave me the idea to explore implicit indications of a basketball court, opposed to just showing the hoop, blackboard, and net. 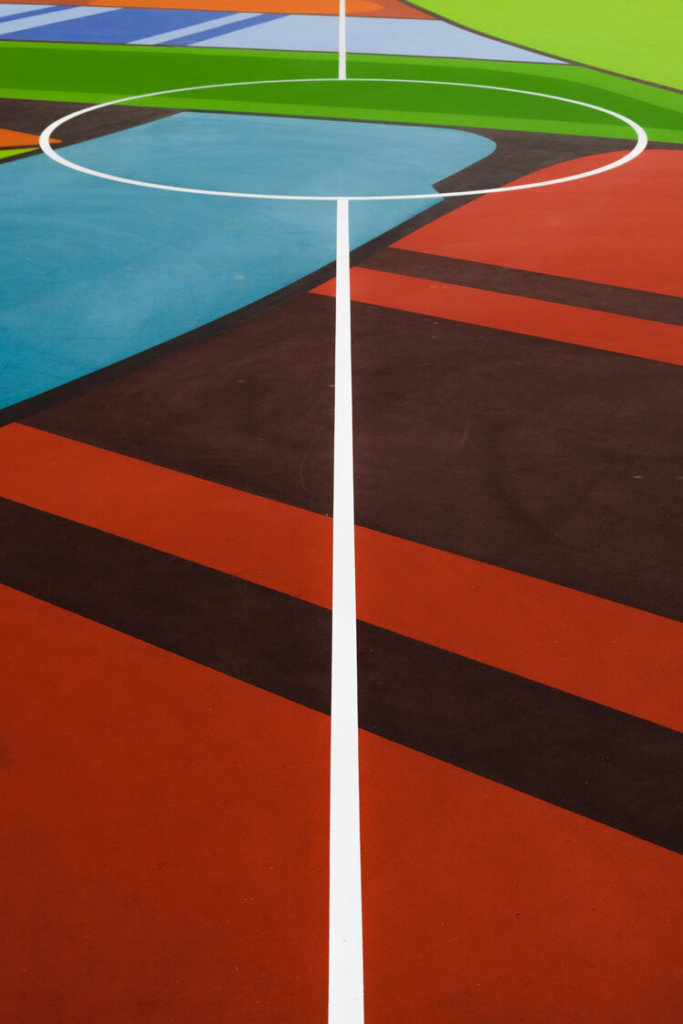 For this one, it was all about rectangles and symmetry. Just try to count how many rectangles there are! Also, the positioning of the court is so clean since it’s on an elevated hill. The hoop was taken off during COVID. 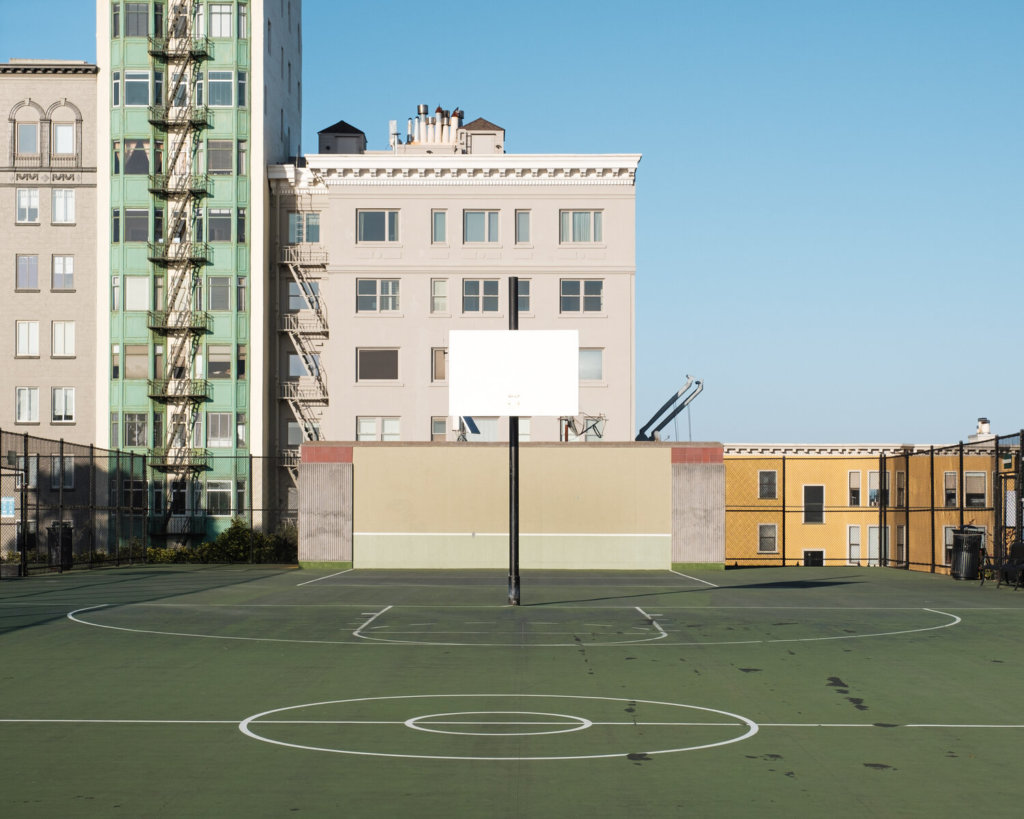 For this one, it was at a school. I really liked the repetition. Also, as a software engineer, this reminded me of the computer science concept of recursion. 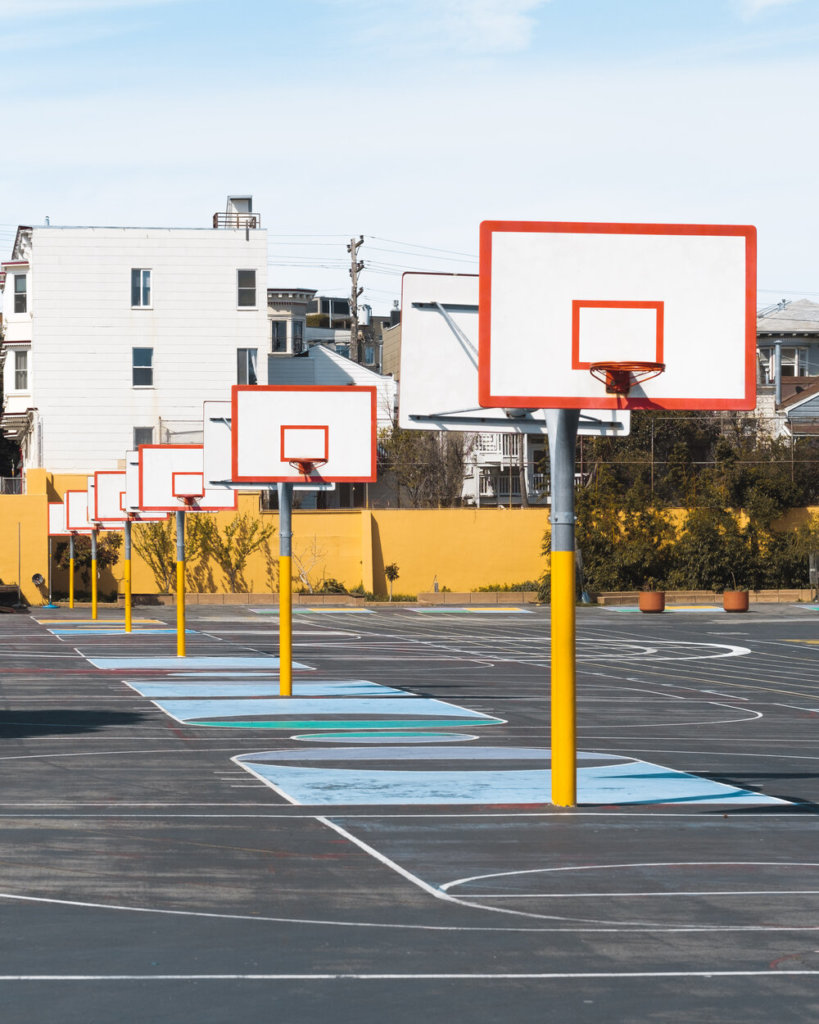 For this one, it was at a part near my home in Canada, taken during the snowstorm. I’d love to incorporate more different weather and lighting conditions into this series. 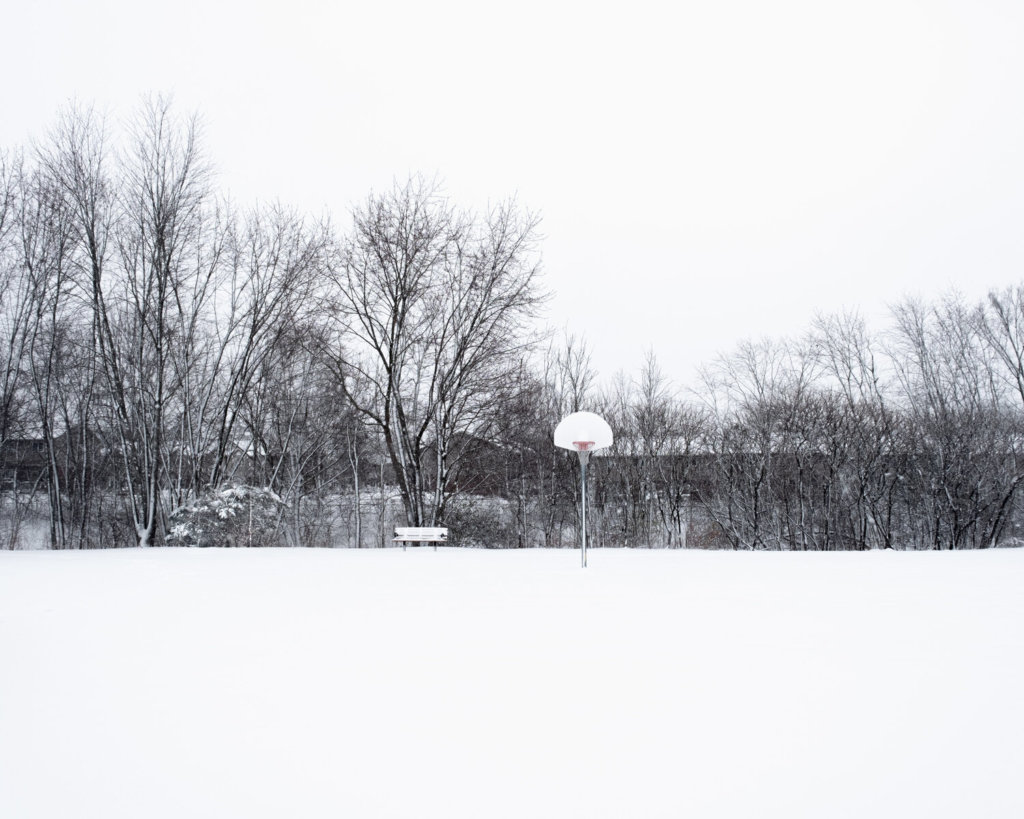 For photographers looking to create impactful images like this, could you share your process of coming up with your concepts and ideas?

I found note taking to be super useful. Everyone has plenty of ideas every day, but ideas are fleeting and our memories are bad. I find that when I write down my thoughts on what I find interesting, it’s easier to recall. Over time, you start to draw more and more connections to a concept and slowly a project comes out. I try to organically wait until an occurring theme that appears in my thoughts, then that’s when I start to work on it. I don’t think I’ve ever forcefully tried to work on a project.
Additionally, I think learning with intention and gathering inspiration is also super important. Many media platforms encourage fast scrolling, it doesn’t encourage the viewer to think about why and how something works. When I started to slow down on viewing photos and learning about other artists and art history, I realized I started getting better at photography. I try to draw inspiration from as many sources as I can and not just from other photographic works. Knowing what’s been done not only gives you an idea of what constitutes as original, but it also gives you a giant pool of ideas to work with.

What are you currently working on?  What’s next?

I’m currently still working on this “Urban Courts” project. It’ll likely take a couple years to complete since I’m not actively working on it due to the mentioned reasons. Hopefully, over a couple years I would have collected enough photos to put together a photography book.
Separately, I got a few other ideas I want to continue. One of them has been an ongoing series where I shoot instant film every day, mostly around things that I don’t think would be worth the effort to pick up a camera and shoot. Another one is around museums. I like going to art museums to see what’s out there and take photos of art pieces that I found interesting. It’s kind of like a museum catalog, but with the purpose of transforming the art piece into something else, instead of purely cataloging. Other than that, I just try to take photos regularly and see what inspires me!

instagram: @ilikecalculus
website: ilikecalculus.com
I’m a Canadian working in the San Francisco Bay Area. Although I’m a software engineer by trade, I love visual arts. Ever since my first camera in 2017, I’ve been quite obsessed with photos. Through photography, I am motivated by challenging common perspectives of our world. I shrink, flatten, and contort the objects of our civilization to draw out the subtle presence of humanity and its relationship with the world. I’m drawn to the quiet solitude and memories of places, things, and people that have become more invisible after shifts in time and culture.
Michael was also featured on SLR Lounge for his project, “The Bridge Reconstructed.’