Abbi and Callen Hearne are a husband and wife who have built a thriving adventure photography business together. They specialize in adventurous wedding, elopement, and engagement shoots held in epic locations, often US National Parks and other gorgeous natural areas.

Their business has grown so successful that they can now choose their travel schedule, and clients will come to them. Some of their favorite locations include Alaska, Yosemite, Zion, and Moab, but they’ve also been branching out into international trips. They’ve done shoots in Patagonia, and they spent all of January in Switzerland, France, and Italy.

Though they stick to their travel schedule pretty tightly, they’re open to ideas and ready to jump on a plane if a client’s suggestion strikes their interest. “We’ll happily travel anywhere in the world,” they’ve posted on their website. 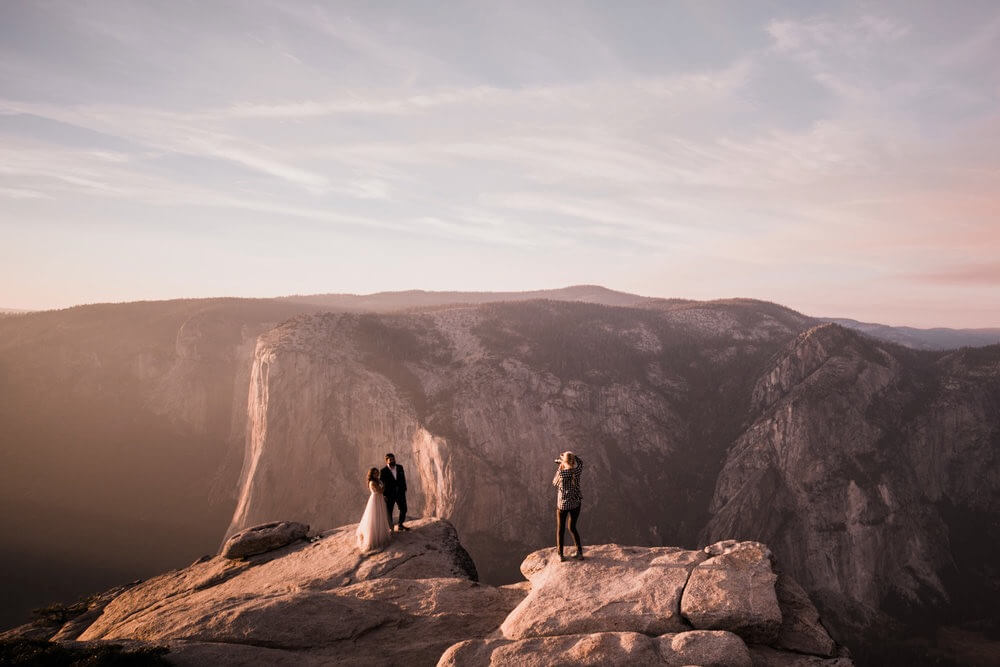 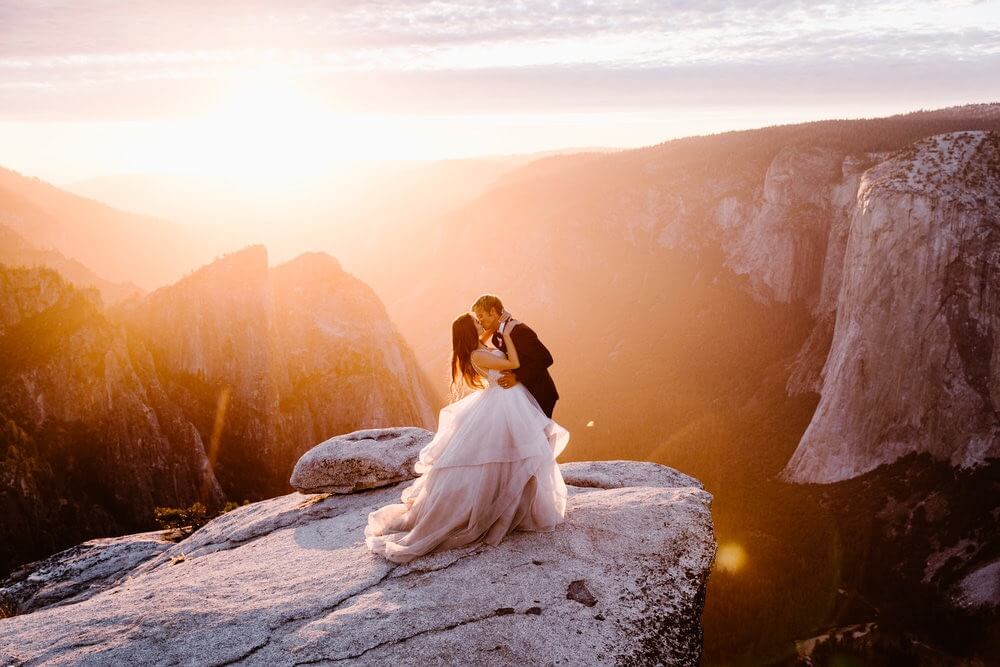 Travel, photography, beautiful locations… It sounds like a dream come true, but it took a lot of guts and determination to get where the Hearnes are now. Like many professional landscape photographers, their dream life didn’t happen by accident.

When they first started out, they had a Subaru Outback and a small camper that was “pretty awful,” and they were pinned to Houston, Texas, where Callen had a job. Whenever they had free time, they’d take long road trips around the western US. Each time, they dreaded coming back more and more.

Finally, in 2015, they took a 3-month sabbatical to test out living on the road. They loved it and decided to make the jump into full-time nomadic living. Callen quit his job, and they planned to live off of whatever Abbi could earn from her photography business. They were hoping to book a few weddings, but at worst, they were prepared to burn through their savings in order to do what they love.

They ended up booking way more weddings than they expected, enough to sustain a comfortable lifestyle and upgrade their crummy camper. Now, they’re living from a cargo van, which they’ve turned into a cozy, little home. For more details about their van and nomadic life, check out their interview with Tiny House, Tiny Footprint. 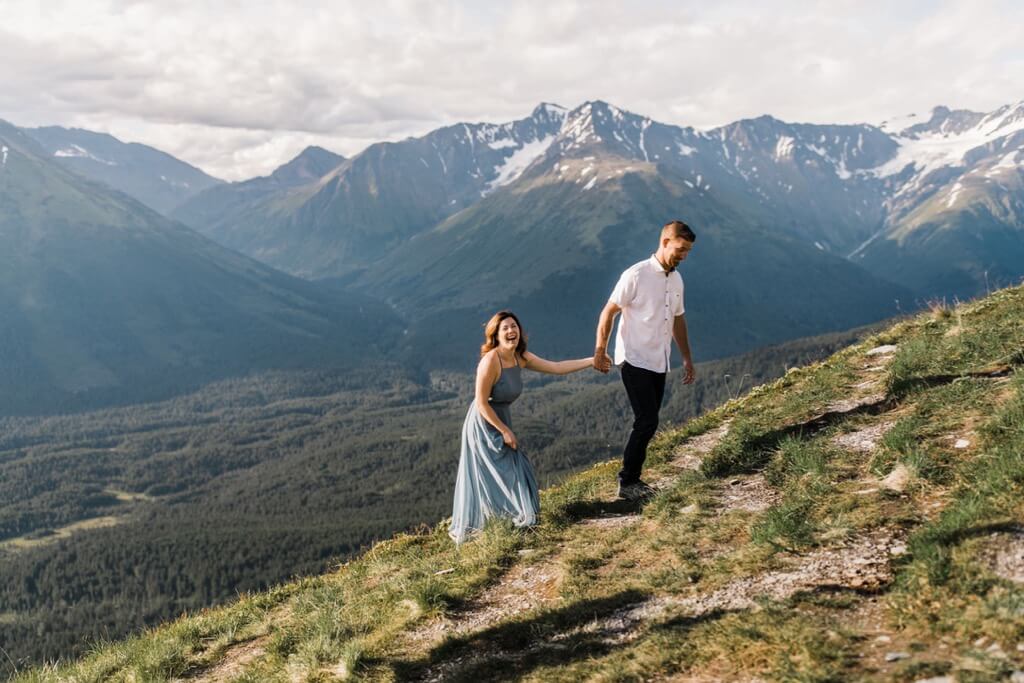 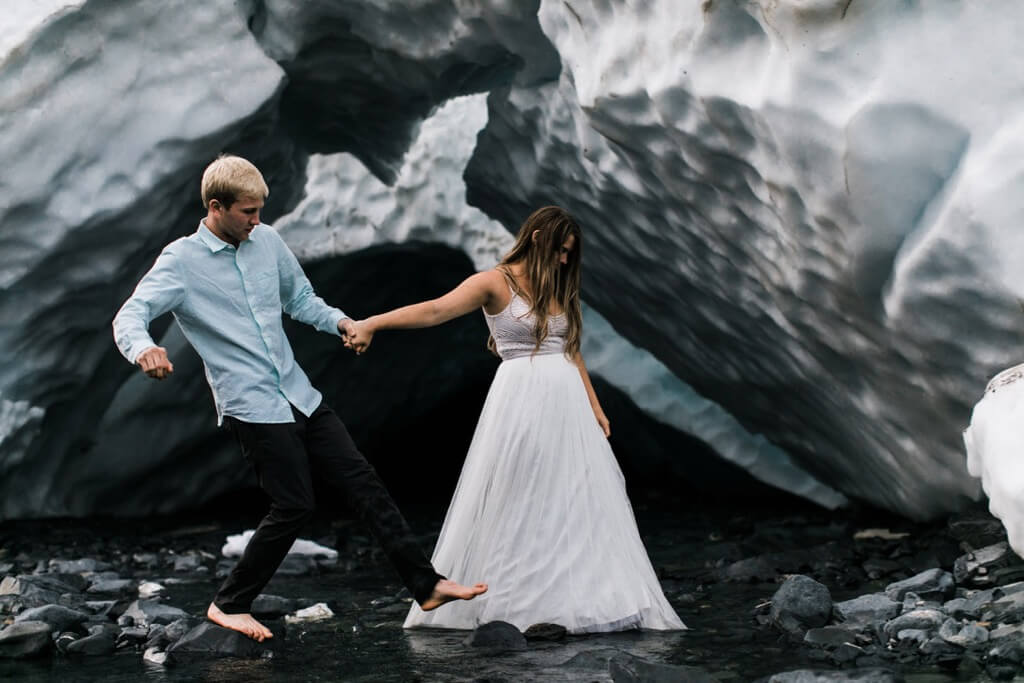 Most of their photography business is run by Abbi, who’s the head photographer of the two. She does all the communicating and planning, and she directs all the shoots. Meanwhile, Callen does all the “extra” shots – the fun, creative photos couples end up loving. They also travel with a dog, Charlie, who acts as their moral support.

They’re able to keep up a good working relationship together partly because they’re both relaxed and can handle conflicts with grace. Despite their differences (Callen is high-energy, while Abbie enjoys chilling at home), they don’t fight very often. “I think a lot of things that might be hard for some couples aren’t that hard for us,” Abbi says.

They also love hanging out with other couples, which is one reason why they love shooting adventure weddings, engagements, and elopements. Because the events are remote and intimate, they can connect with the couples on a deep level. They don’t have hundreds of guests to photograph or a tight wedding schedule to follow. They’re part of a genuine, close-knit experience, exploring the wilderness together with the couple. 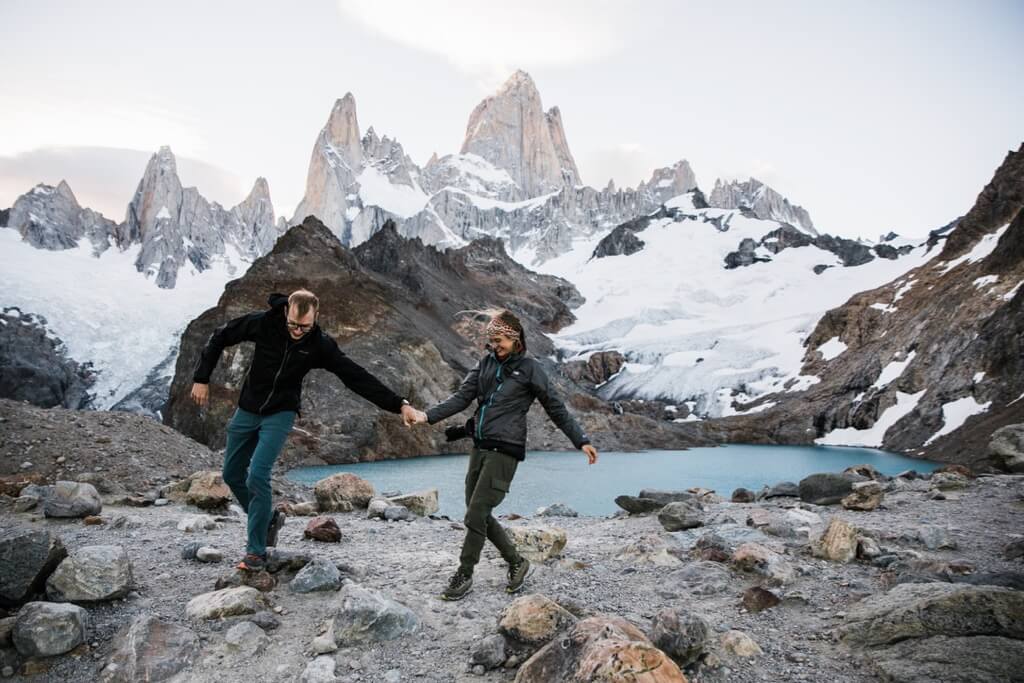 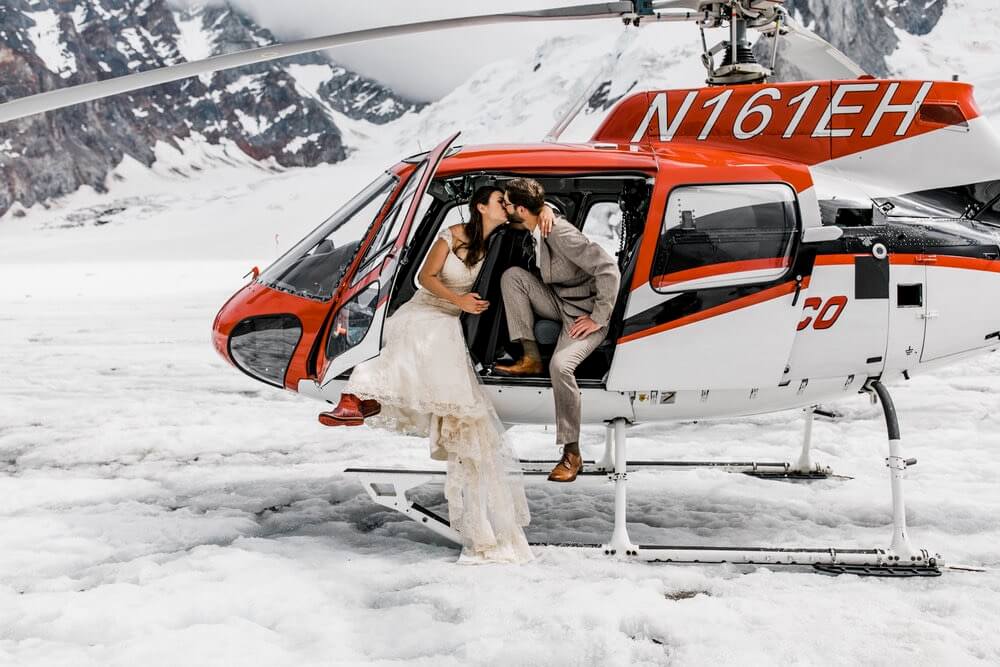 They’re booked all through the year, and every shoot is unique. Whatever adventure the couple wants – even if it means hiking at 4am or being out in freezing weather all day – they’re up for it.

This openness has allowed them to witness some spectacular scenes and once-in-a-lifetime moments. For instance, they once booked a wedding on the Mothership Space Net Penthouse, an aerial hammock that hangs 400 feet above the Moab Desert. The wedding included paragliding, highlining, aerial stunts, Acroyoga and giant bubbles. There were even 10 BASE-jumping “flower girls” who released flower petals from their parachutes. 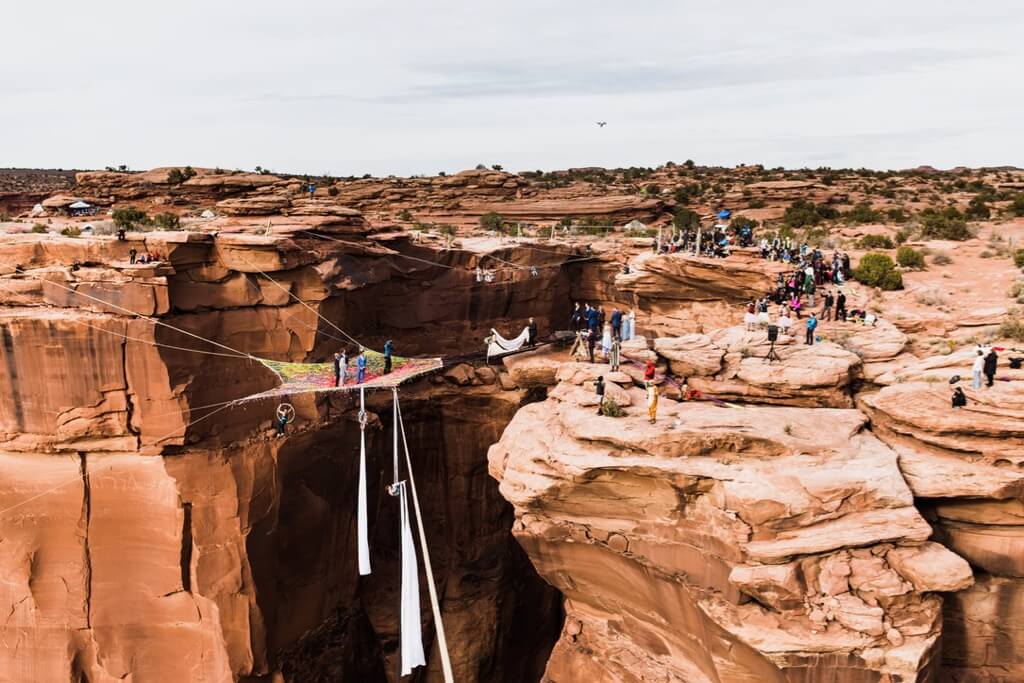 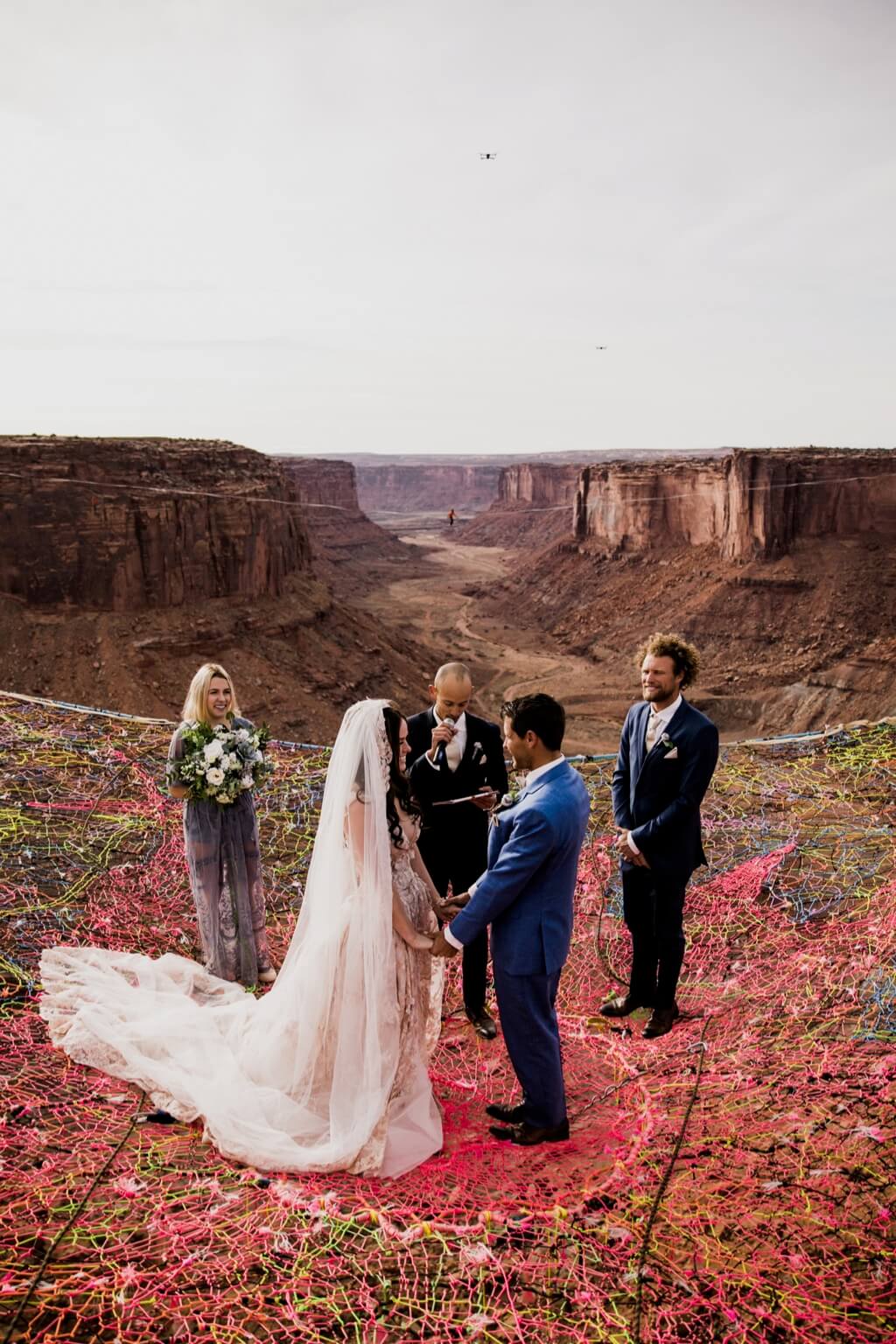 With weddings like that, plus gorgeous scenery and excellent photography, the Hearnes have garnered a significant following on social media. But getting more followers isn’t what they care about most. Just like when they first started, their hearts are still about nature first, business second.

“Am I destroying these places by making them trendy?” she wonders in an interview with Austin Woman. Although she and her husband are careful to leave no waste behind and treat the environment with respect, there’s a risk that not everyone will share their cautiousness. 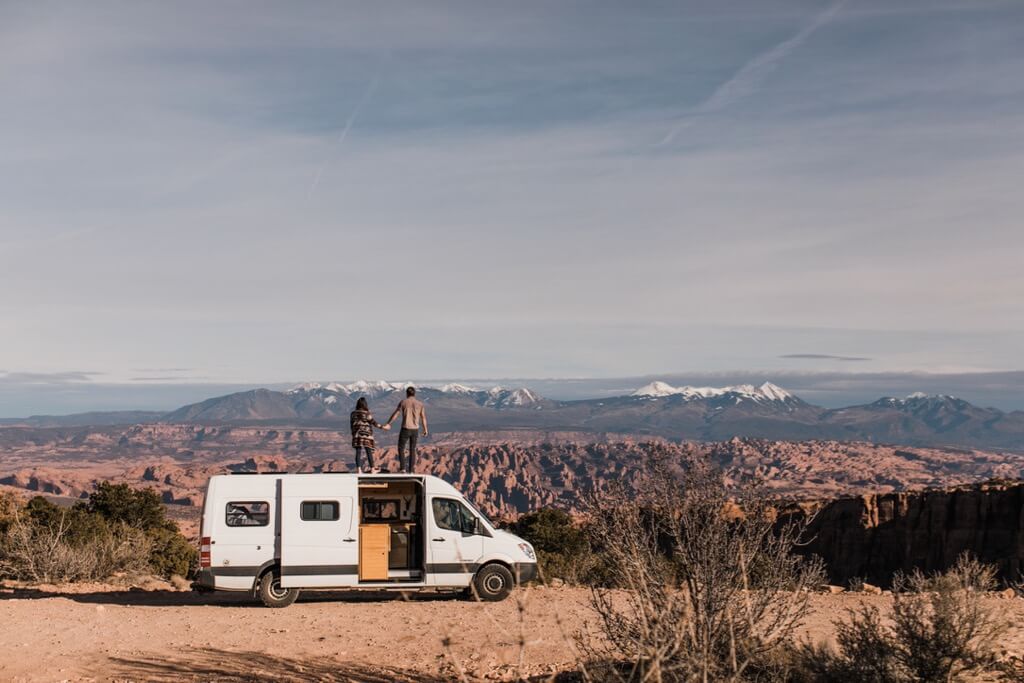 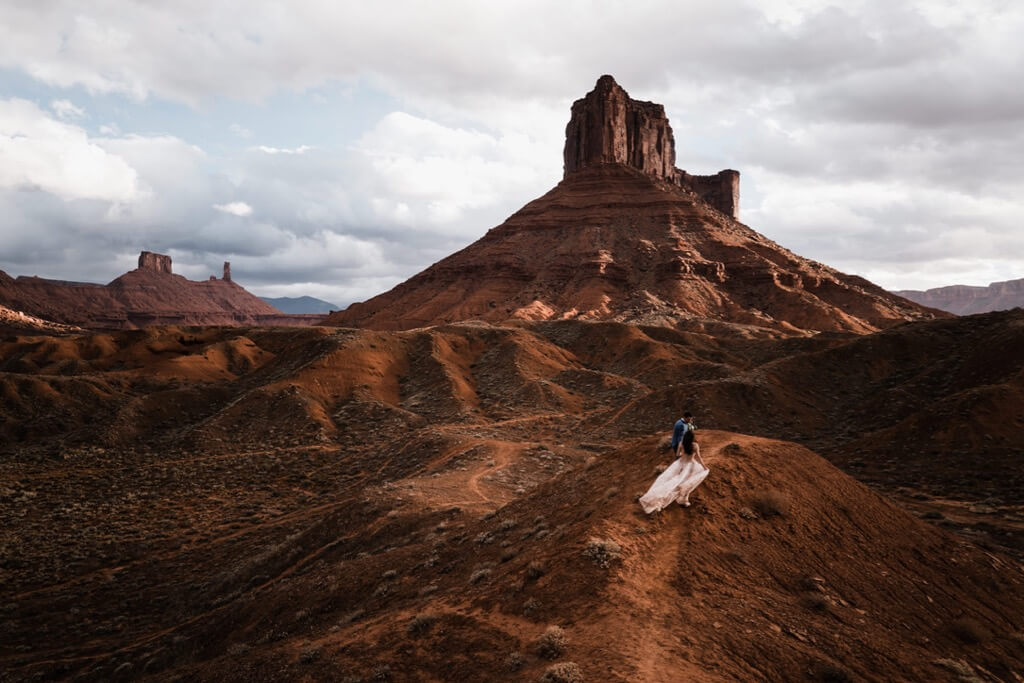 In other words, adventure photographers should examine their motivations before they schedule photo shoots in protected natural areas. “If the only reason you’d go somewhere is because you’ve booked a gig there, it’s time to step back and ask yourself why you want that booking,” reads one of their Instagram posts.

“Is it because adventure elopements are trendy right now? Is it for Instagram likes? So you feel like you’ve reached a certain status in the photography industry? All of these motivations are empty. If you actually feel drawn to adventure, just go for it. Stop saying you need someone to elope somewhere so you ‘have a reason to go.’ Just go.” 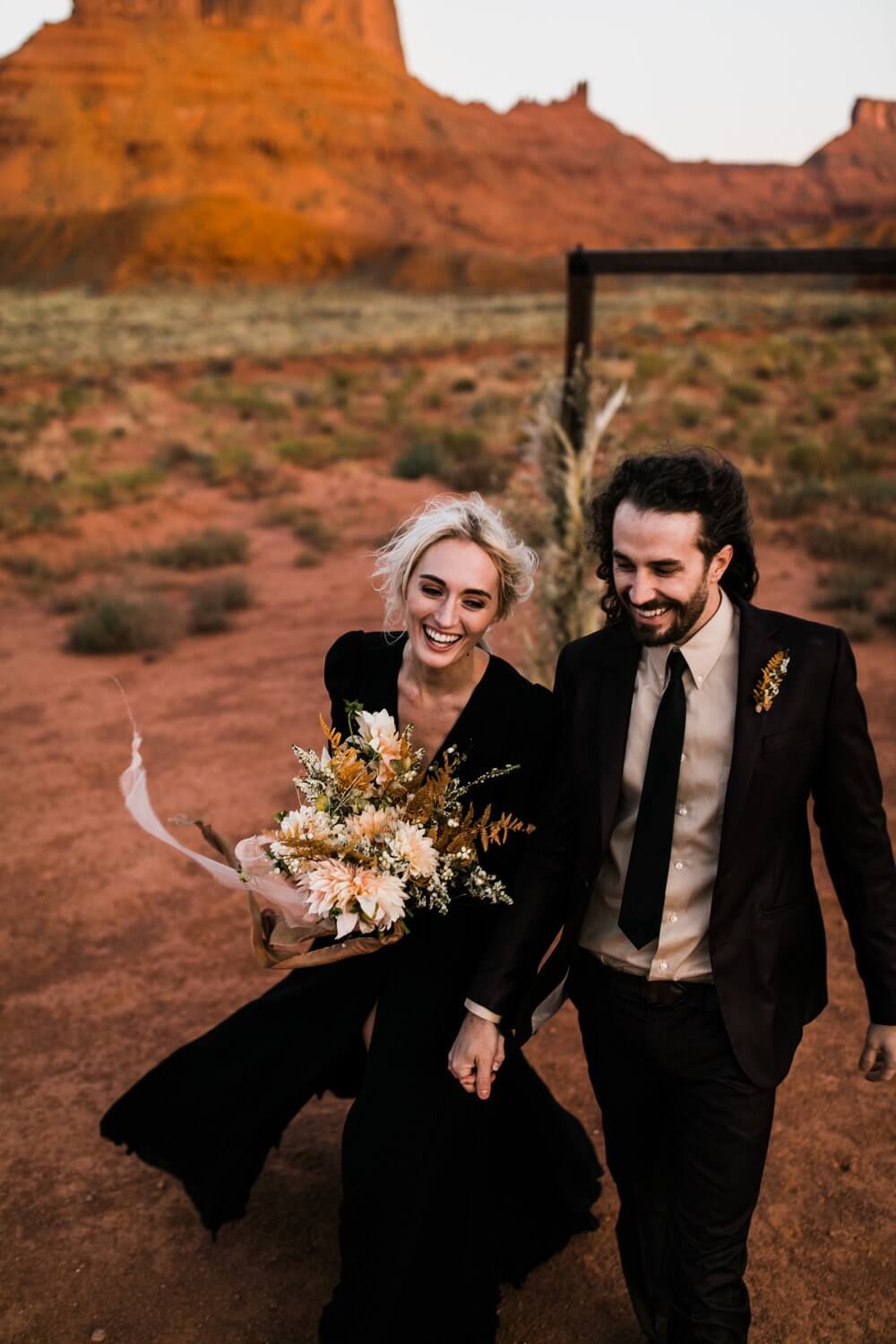 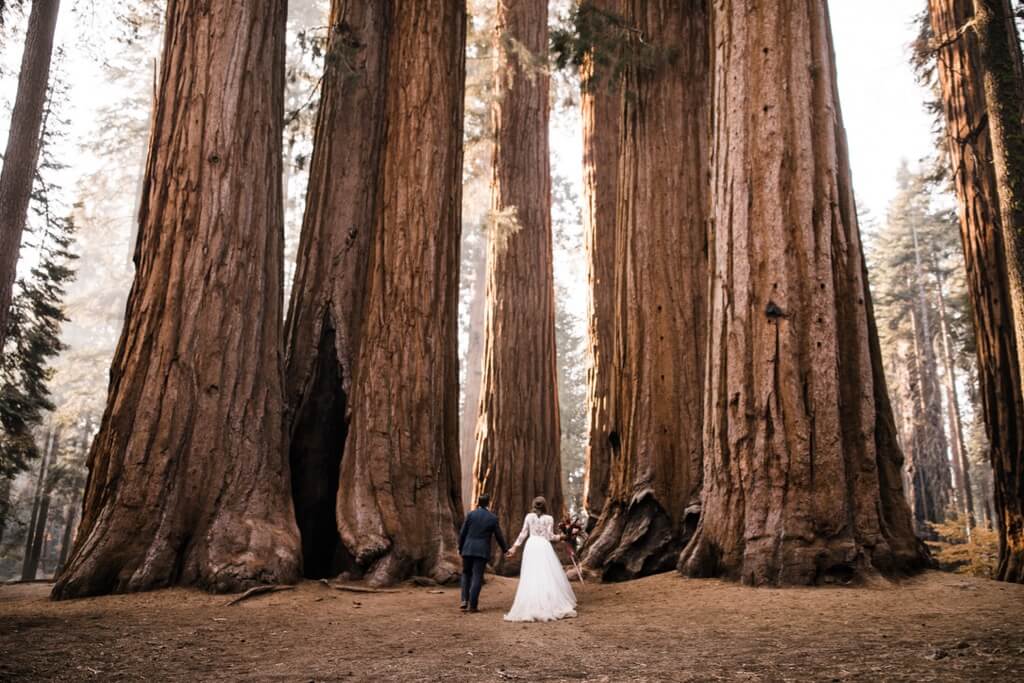 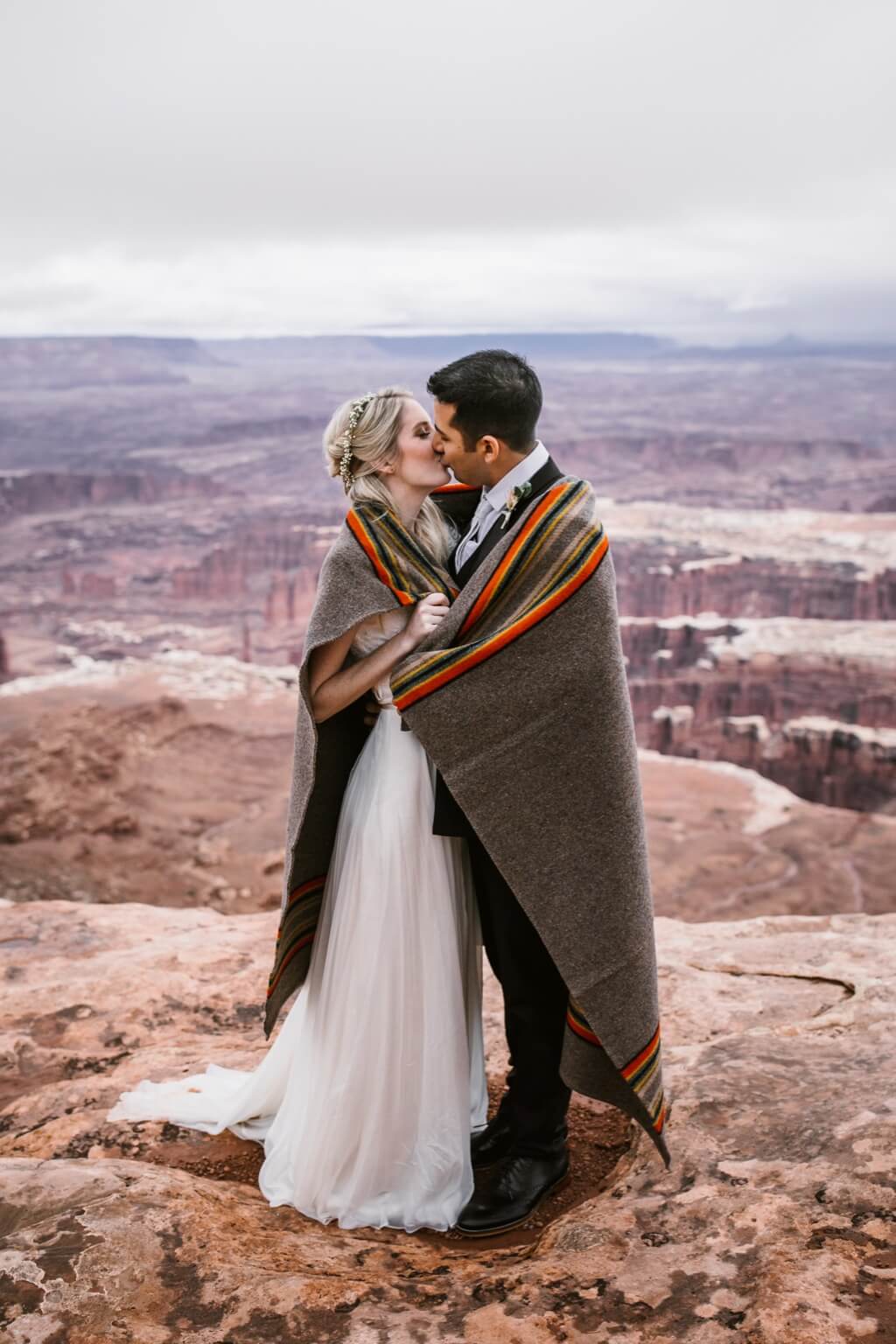 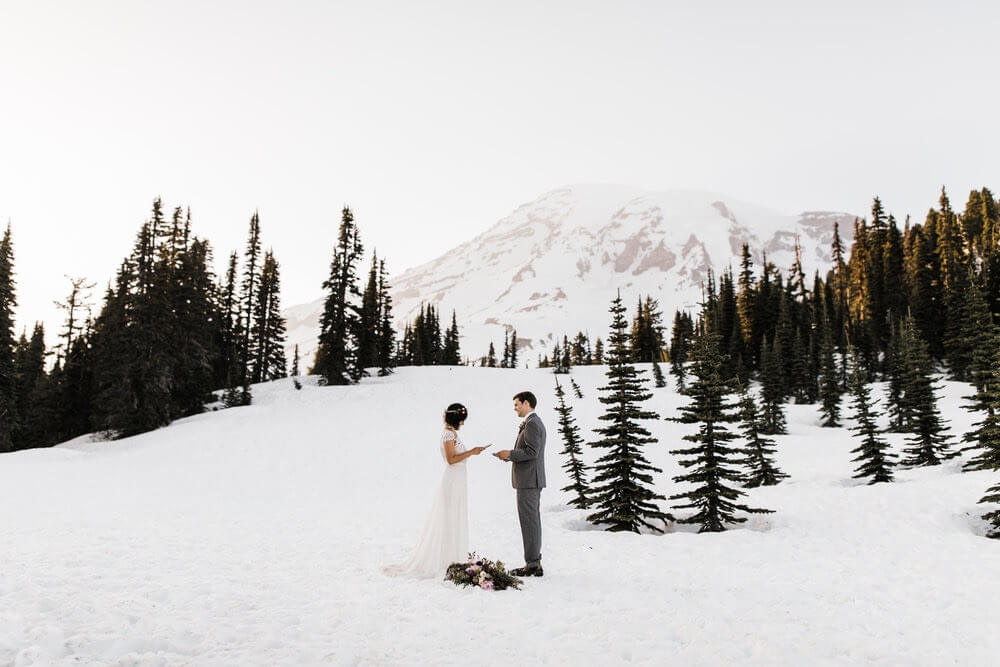 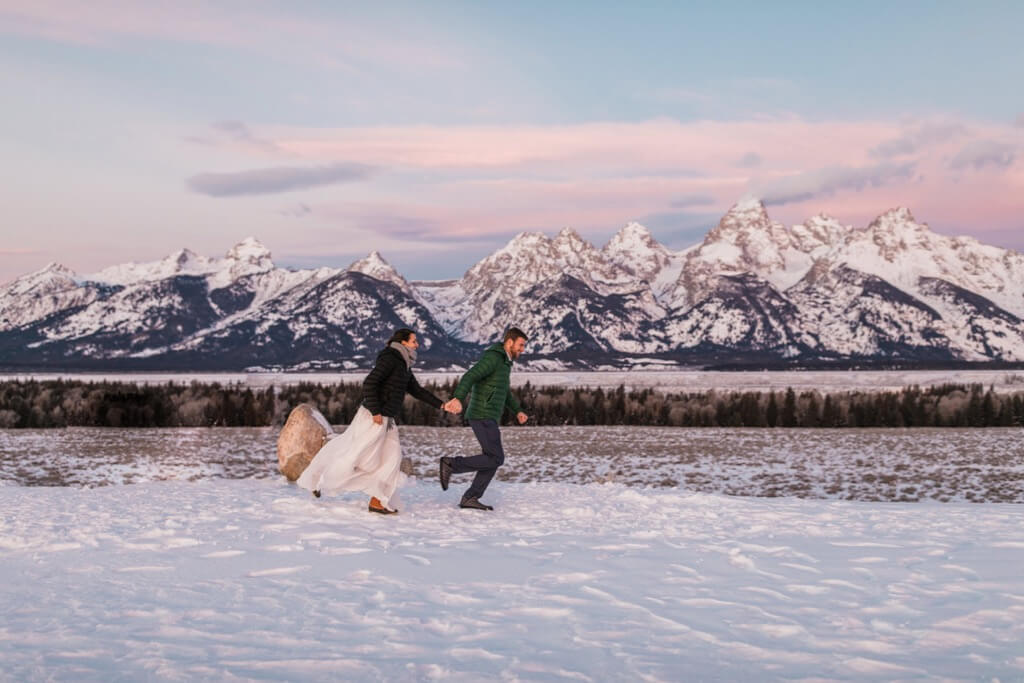 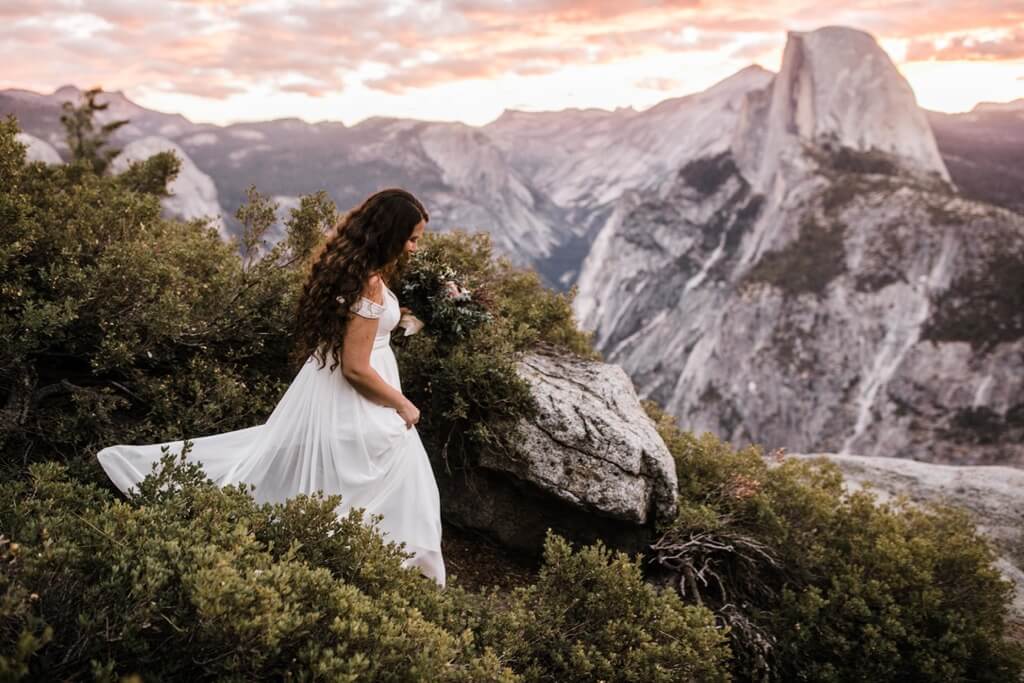 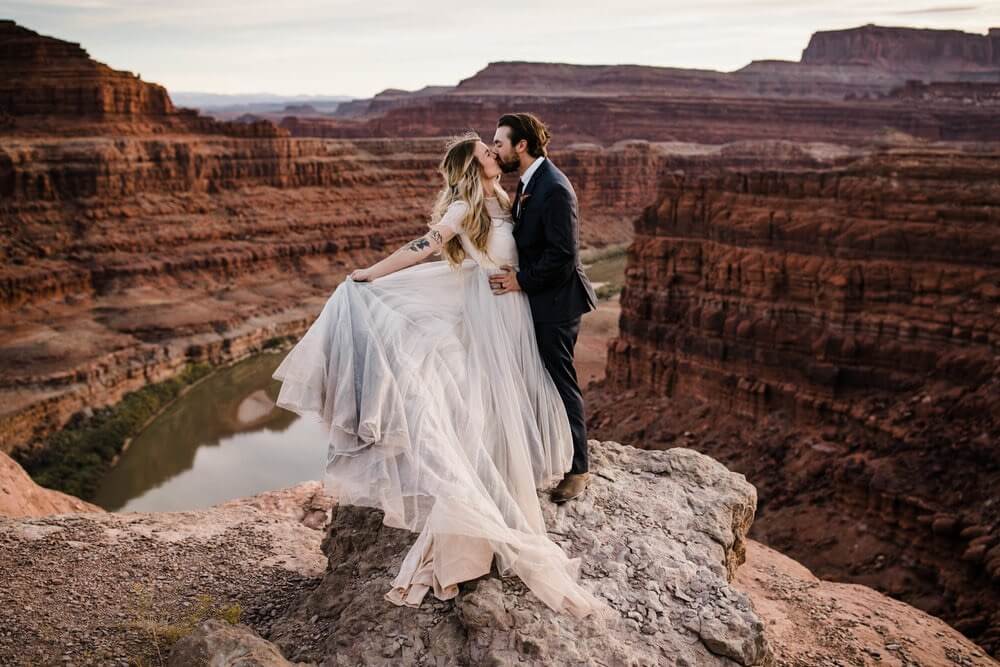 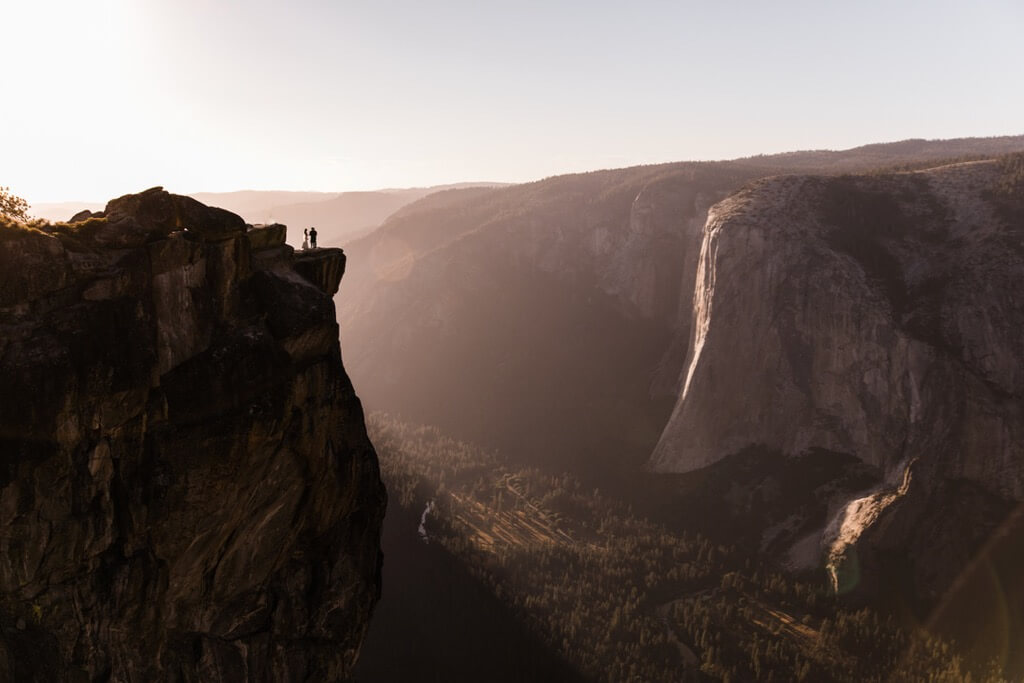 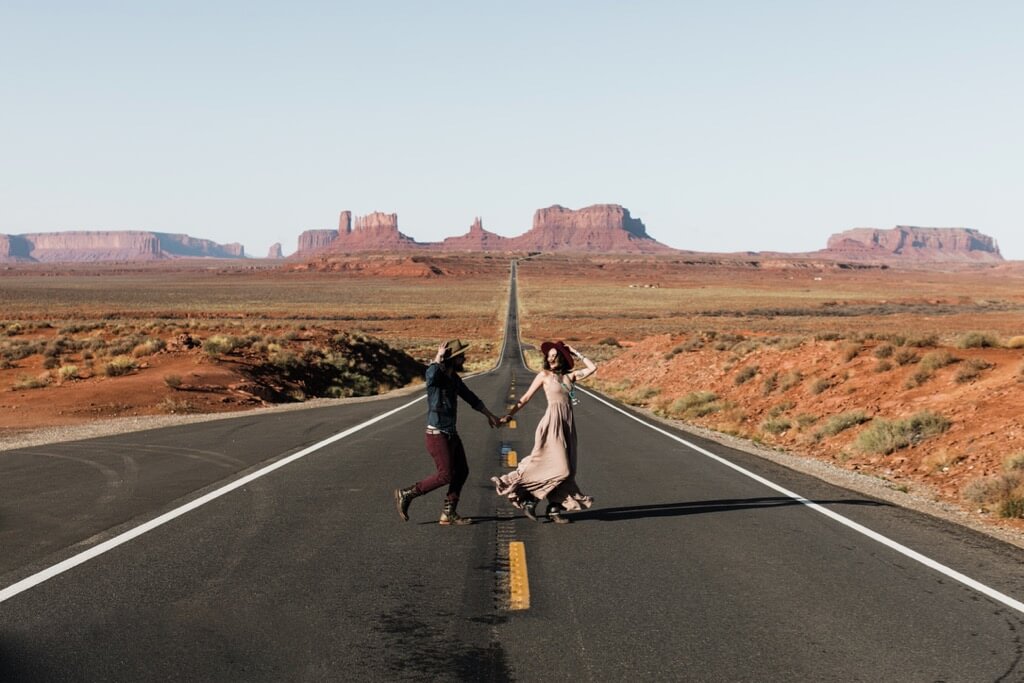 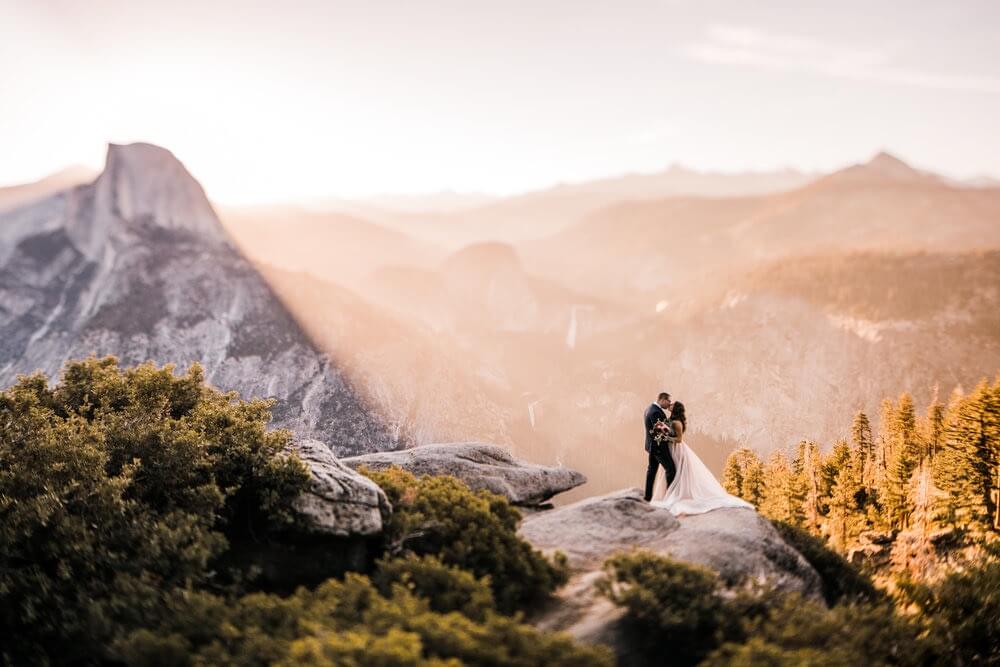 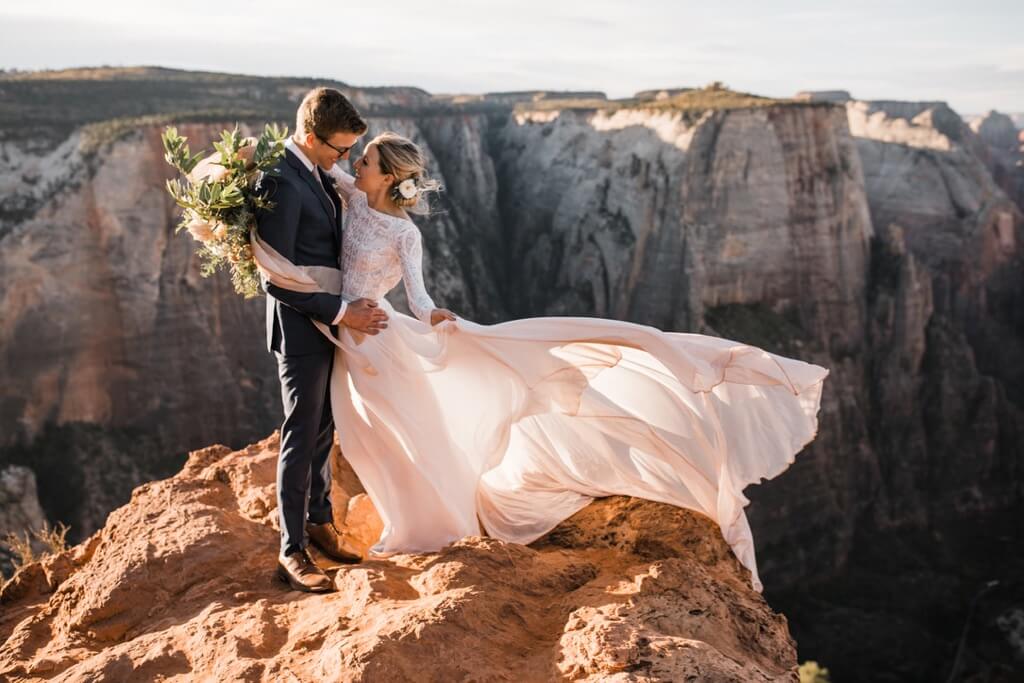 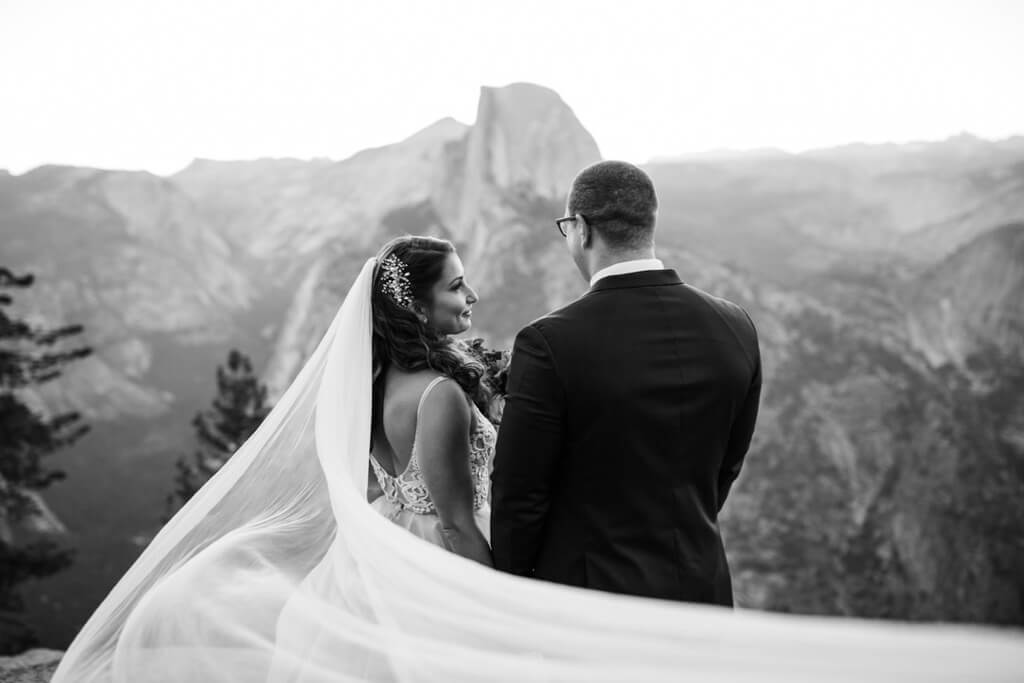