Stereoscopy or Stereoscopic 3D is a way to create the illusion of depth from two flat images photographed or drawn at slightly different angles. It simulates what happens every waking moment of our life when our brain fuses the two flat perspectives seen by each of our eyes into a unique three-dimensional mental picture. Whatever the technique used to view stereoscopic pictures (lenses, prisms, mirrors, glasses, filters, etc.), the idea is that the left eye can only see the left image and the right eye the right one, thus feeding the brain with the two separate inputs needed to operate the fusion into a three-dimensional representation.

Stereoscopy was invented in 1832, seven years before photography was revealed to the world. The first stereoscope – a word coined by its inventor, Charles Wheatstone – used mirrors and hand-drawn perspectives. Photography turned the stereoscope into a powerful instrument which allowed people to discover the world at a time when travelling was difficult, expensive and risky. It has been said the stereoscope was the “television” of the Victorians. It was certainly a window onto a wider world. From the late 1850s most countries could be discovered and virtually visited from one’s fireside through the oculars of the magical instrument (the original mirrors had quickly been replaced with lenses).

Millions of stereo images were produced on plate, glass and paper during the second half of the 19th Century, which would literally draw the spectator into the picture and make them feel they were actually in front of the Pyramids, inside the Tuileries Palace in Paris or next to the majestic Niagara Falls. First taken sequentially with a single camera, which was moved laterally between the two exposures, stereoscopic images were later made simultaneously with specially built binocular cameras that captured the two perspectives through two lenses 2.5 to 3 inches distant from each other.

Towards the end of the Victorian era photography became available to amateurs who, despite some technological breakthroughs, still had to use glass plates. With the advent of film rolls and colour, stereo photography had a second and glorious lease of life in the 1950s. Dozens of different stereo cameras were manufactured then, one of the most popular being the Stereo Realist. Stereoscopic slides could be mounted as transparencies for use in personal viewers or projections on a large screen. Decades later a handful of digital stereoscopic cameras were issued but these have all been discontinued and people interested in taking 3D images either have to buy second-hand cameras or use their smartphones, reverting to the technique used by the pioneers of the medium and taking their images sequentially (Denis Pellerin, Photo Historian).

I am a part of a thriving community of stereo photographers (aka stereographers – sounds more sciency) and a quick search on social media with hashtags such as #stereoview, #3DPhoto, #stereoscopic will show you that there are many different approaches to stereo photography and different reasons for its use, both personal and professional. The added dimension over mono photography means you don’t just capture a picture of an instant, you capture the depth of the moment frozen in time, which, when viewed in 3D, allows you to be immersed into the image and able to explore the scene using the depth cues produced from the slight differences between the two photographs. It seems as though you can reach out to the beauty of a loved one, explore all the layers of depth in a composed still life or cluttered landscape, stroke the layers of fur on the kitty who kindly posed for your strange camera, examine the fine details of architecture and fashion, relive busy social moments which are now alien to us in lockdown, revisit events and exhibitions which no longer exist.

Dominik Oczkowski, the final author of this article, uses stereo photography in his professional role as an architect, capturing both the important visual and spatial information of the projects he is working on. Another friend of mine who is an artist uses stereo photography as a studio aid, referring to the stereoviews he’s taken for the final finishing touches of his paintings, to allow the 3D depth from them to be conveyed onto a flat canvas through his paintbrush. On a personal level, stereo photos allow you to relive experiences in a way mono photographs cannot, you’re not just a spectator looking at a flat image, you’re drawn into the scene and you are part of the brief moments they have captured.

Current technology means there are many different ways in which you can capture and share stereo photographs, allowing your friends and complete strangers alike to experience the depth of the world around you. There are apps for smartphones, which allow you to take two sequential photos and create a stereoview from them within a fraction of a second; also giving you different options on the type of 3D image you want, such as an anaglyph, a side-by-side stereoview, a wiggle GIF. A DSLR can be used to also take sequential left and right photos and free software, such as StereoPhoto Maker, can be used to produce the 3D image. A beam splitter can be attached to a camera to take instant left and right images, with mixed results. Custom rigs can be made, where two cameras are synchronised to take stereo photos; there is also an app available which allows you to synchronise two iPhones to take the two images. As Denis mentioned before, unfortunately, there are currently no commercial digital stereo cameras being produced, therefore the most popular but discontinued, the Fujifilm Finepix Real 3D W1 and W3 cameras, still command a high price despite their relative lack of megapixels. For tutorials, hints and tips on stereo photography please check my blog, Stereoscopy Blog, which is aimed at making stereoscopy accessible to everyone; there is also lots of content being continually published online as stereoscopy is ever-evolving. For me, one of the most exciting projects currently in development is the use of stereo photography in personal holographic displays; stereoscopy is definitely still alive and kicking and finding new ways to be used.

There have been articles for the last couple of years about an analogue revival and even before then I had been enjoying listening to a vinyl on my record player whilst loading one of my stereo cameras with film, ready to capture the world around me in 3D.

I personally find that my greatest enjoyment in stereo photography is with analogue photography and the darkroom. I find it a much more mindful and immersive form of photography as compared to mono and digital, especially with the extra time taken for pinhole photography, you are capturing time as well as depth. It makes you put effort into every exposure, making each one (or simultaneous two!) count, then afterwards experiencing the magic of the darkroom as moments captured on film react to the chemicals washing over them to appear before you, and the final enveloping enjoyment of stepping back into the memories you’ve captured, in all their beautiful depth.

With today’s technology it is possible to scan negatives or slide film from a stereo camera and use applications like Photoshop and StereoPhoto Maker to make stereo images and wiggle gifs, which can be displayed on smartphones, computer screens, projected, posted on social media, etc. For me though, the real enjoyment comes from going back to the original method of mounting slide film and viewing the results in a viewer, such as the ones made in the 1950s for the Stereo Realist 35mm format. It feels even more immersive than with a smartphone or a screen; you can shut off from the world around you as you step back into the instant the shutters closed.

The only downside of enjoying analogue stereo photography is that time has not been kind to its accessibility; all aspects of it used to be readily available and quite inexpensive but now it’s a different story. Stereo film cameras are, unfortunately, mostly second hand these days but a search online is a good way to start for all things analogue. So far, I have only ever bought second hand analogue stereo cameras and usually, especially when eBay is involved, it is potluck whether they have slow shutters, a lens which isn’t focusing, light leaks, etc. I’m therefore really excited to be able to back the Kickstarter campaign for the Minuta Stereo, a stereoscopic pinhole camera, by Dominik (see below). Along with the extra dimension stereo photography adds to images, I find pinhole photography fun, enjoyable and mindful; I’m very much looking forward to trying one of these cameras myself (Rebecca Sharpe, The Stereoscopy Blog). 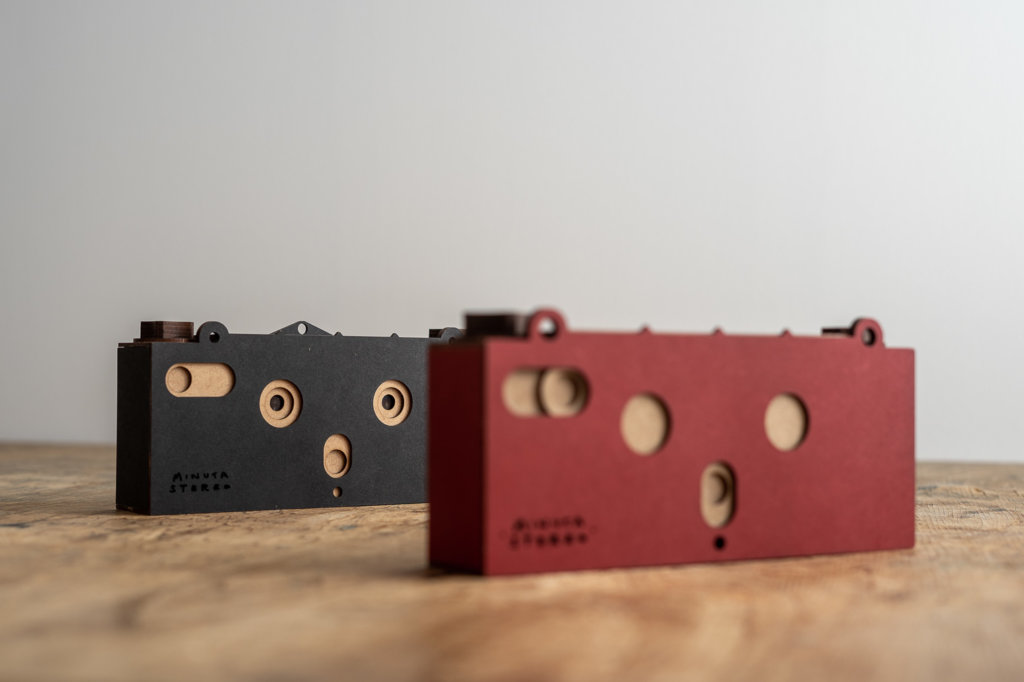 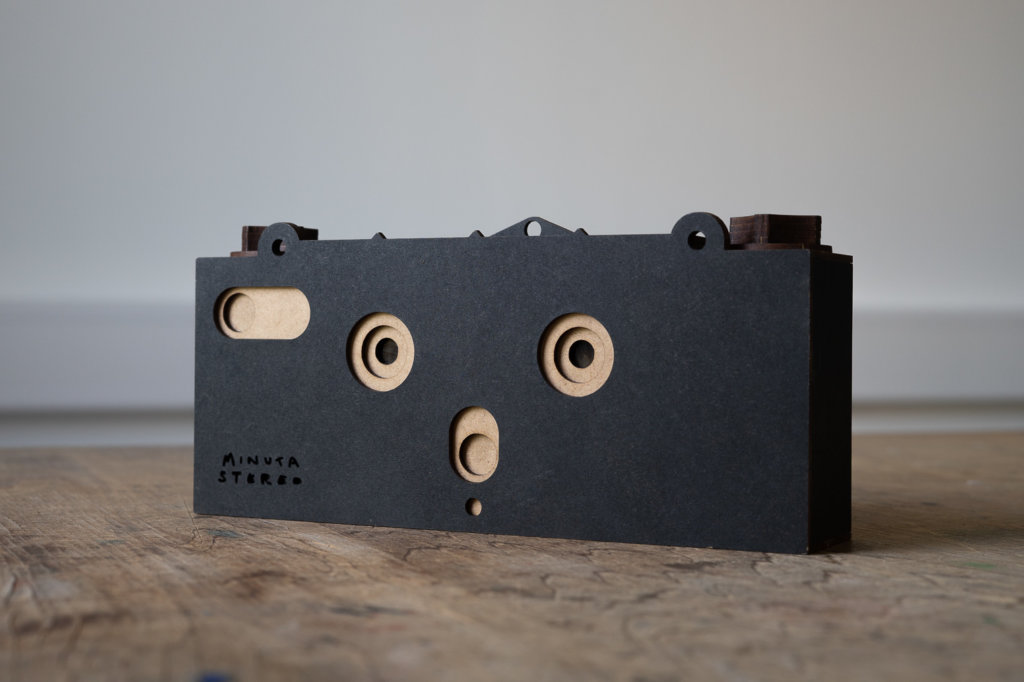 You can find the Minuta Stereo Kickstarter campaign here https://www.kickstarter.com/projects/2028240821/minuta-stereo