Before heading out to get some great images of the city after sunset, it is important to make sure you have the proper equipment. This means that you should definitely have a flexible tripod that can adjust to varying heights; a wide-angle lens; some sort of lens hood or a system for directing the flash outside of the frame; and a game plan.

Urban areas can be dangerous locations in which to setup a camera and take a prolonged series of images. This is not due to the potential for crime alone, but also because of busy streets, and the fact that people do not see well in the dark. This translates to the need for a photographer to select their target shots and consider the settings that their camera might need to make the images they want.

If the camera has a capacity for custom “presets” a photographer who makes a regular habit of nighttime photography might want to dial in these settings in order to make their work as easy as the tap of a button. 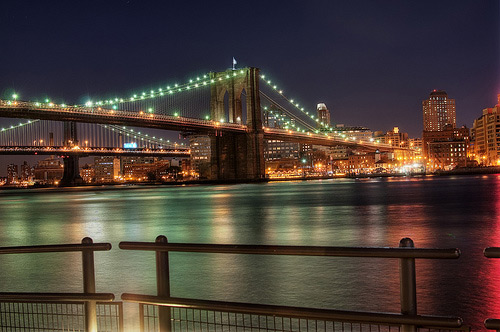 When thinking about urban photography during the evening hours it is naturally tempting to envision the many shots of a city skyline reflected in a nearby body of water. If this is something you want to do it is a wise idea to choose a place where you might also be able to incorporate a major element such as a bridge, shoreline, walkway or other framing element that can also give the picture a bit of distinction.

Consider the picturesque Brooklyn Bridge in New York City. It is gorgeous when illuminated at night, but a photographer who includes the steel rails and concrete walkway in their photograph will be adding an appealing angle and frame to the image.

Naturally, the city is full of buildings too, and photographing them at night can allow for some really remarkable images of quiet streets and subdued lights. It can also allow for the creation of some riotously colorful scenes as well. 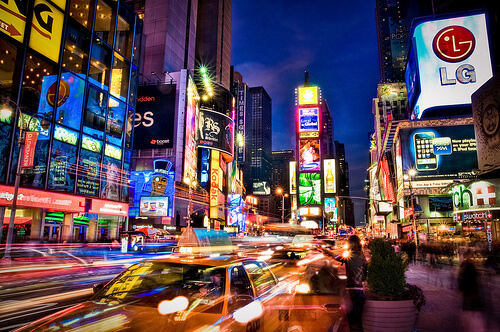 Let’s consider a locale like Time’s Square. This is an area full of traffic, lights, people, and activity. A good photographer might want to eliminate the presence of people from the scene, and this is easily done by mounting the camera to a tripod, and setting the exposure for ten to thirty seconds with the aperture all of the way down. This turns pedestrians and vehicles into blurs, but keeps the lights and signs in sharp focus.

Finally, most visitors to urban areas are warned that staring up at the skyscrapers and tall buildings gives them away as a tourist. After dark, however, a photographer can turn their lens up to the highest heights and use longer exposures to make dramatic photos of the many buildings and their fine details. If flash is needed this is the time for using the hood or deflector to fill the entire space with light.