Earth is a beautiful, dynamic “blue marble,” and satellites like the Suomi NPP capture images of it multiple times a day. Thanks to the NASA Earth Observatory and NASA Goddard Space Flight Center, we can view many of these awe-inspiring pictures online.

In this post, we’ve put together some gorgeous pictures of Earth from space, photos that most of us can only dream about taking. But with continued interest in space programs and research, that dream could become a possibility someday. 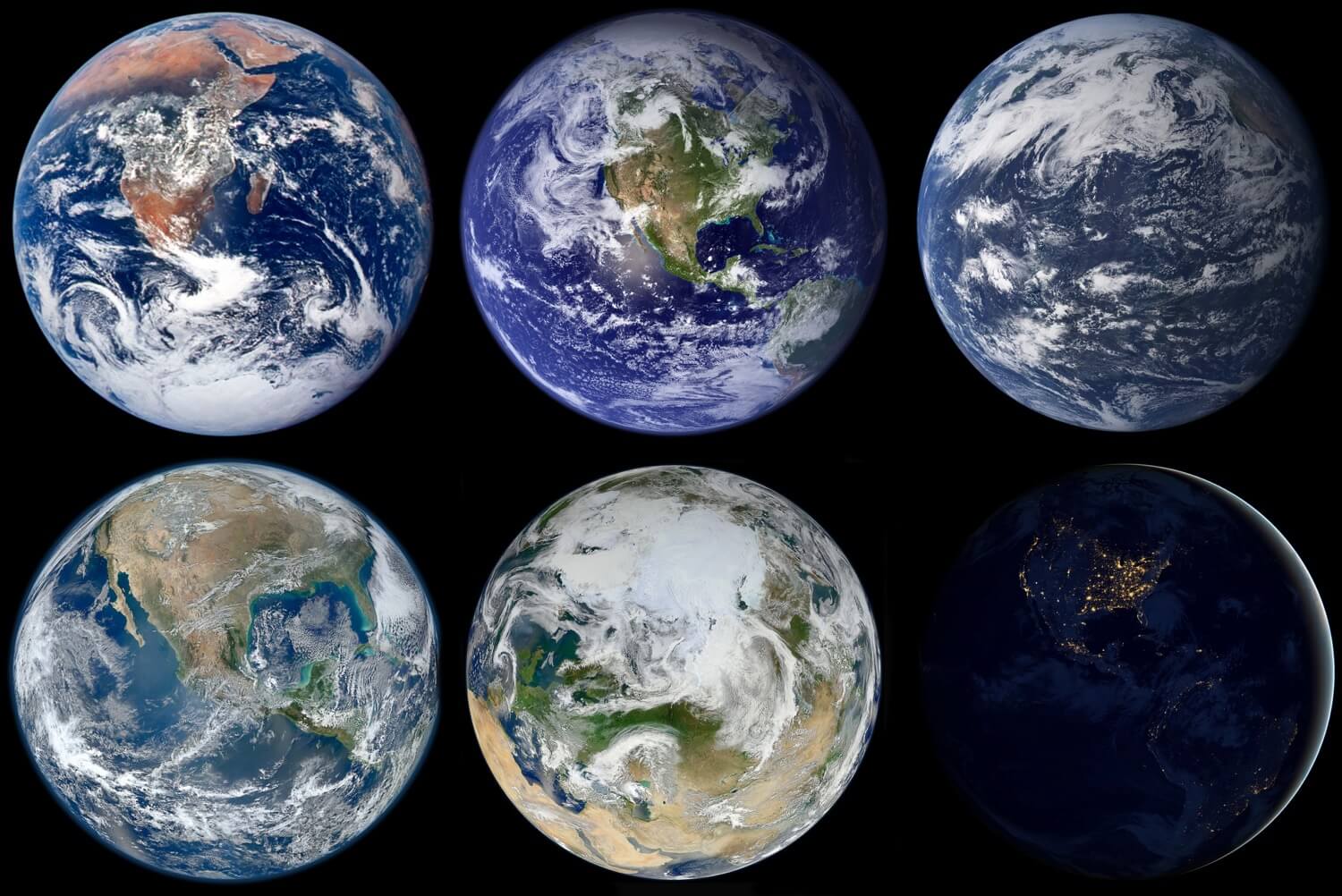 Despite all the technological, political, and social changes that have occurred in the past 50 years, the way Earth looks from space hasn’t changed that much. The ocean is still blue, the clouds are still white, and the continents are still roughly the same shape.

While major events like forest fires or volcano eruptions are visible from space, they can end up looking small and insignificant compared to the rest of planet, hanging in the expanse of space. That’s one of the reasons pictures of Earth are so compelling; they provide a humbling view of humanity, showing how tiny we actually are in the universe.

The main thing that has changed about pictures of Earth is their clarity. Thanks to advances in technology, we can now capture images of Earth in sharp detail. But whether you’re looking at images from now or 50 years ago, the sense of wonder remains the same.

Here are both historical and recent pictures of Earth to inspire awe and put our life on this planet into perspective. All images are courtesy of NASA Goddard Space Flight Center, which has an incredible collection of photos and videos in their online galleries.

Pictures of Earth from Apollo 8 and Apollo 17

These two historic photos were among the first ever captured of Earth from space. The first, called “Earthrise,” was taken by astronaut William Anders in 1968 during the Apollo 8 mission to orbit the moon.

It’s been called “the most important photograph ever made” as it helped launch the environmental movement in the US. As Anders later said, “We set out to explore the moon and instead discovered the Earth.”

Four years after the Apollo 8 mission, another influential photo of Earth was taken by the Apollo 17 crew five hours after their launch into space. Called “The Blue Marble,” this image was widely printed, especially by environmentalists, as it showed how isolated and fragile the Earth is. 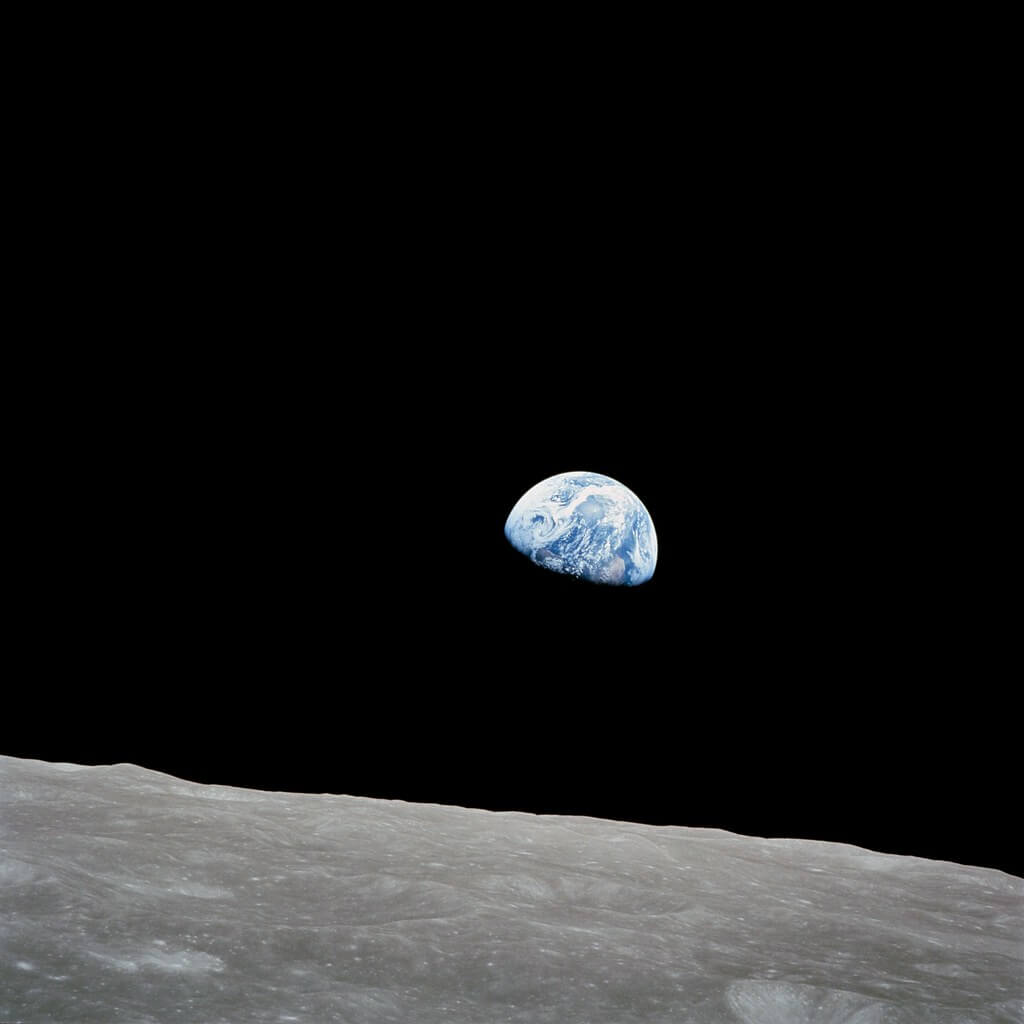 The Blue Marble from Apollo 17 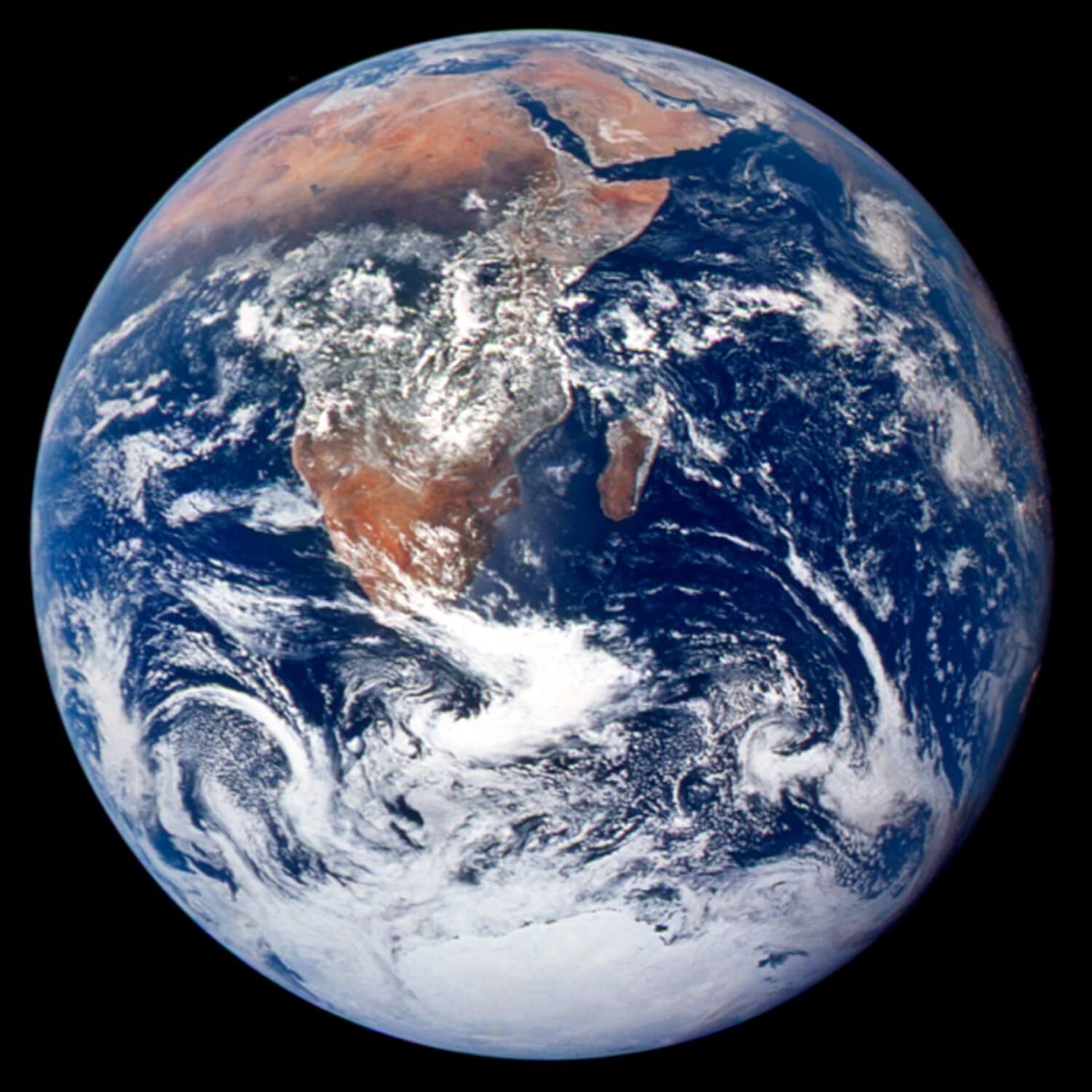 Inspired by The Blue Marble picture from 1972, NASA has created more Earth images with the same composition, showing the planet straight on in the middle of space. Only now, they capture images with satellites instead of a manned spacecraft. And they don’t take a single image – they rely on data and imagery from several sources, combined together.

These composite images have a level of clarity, color, and detail that can’t be achieved in a single satellite photo. That’s because satellites orbit close to Earth. They aren’t far enough away to get a whole hemisphere in one photo.

Robert Simmon, a data-visualizer and designer at NASA’s Earth Observatory, admitted to Quartz that combining images does lead to some “fakeries.” For example, in the 2002 Blue Marble image of North America, the darkness around Earth isn’t actually space. It’s a black background he added. And the Earth’s atmosphere? That’s Photoshop blur.

However, these edits are all based on real data and imagery. And without some adjustments in Photoshop, the final image would look strange and unrealistic. It may not be as authentic as the photos from Apollo 8 and Apollo 17, but it’s still grounded in facts. 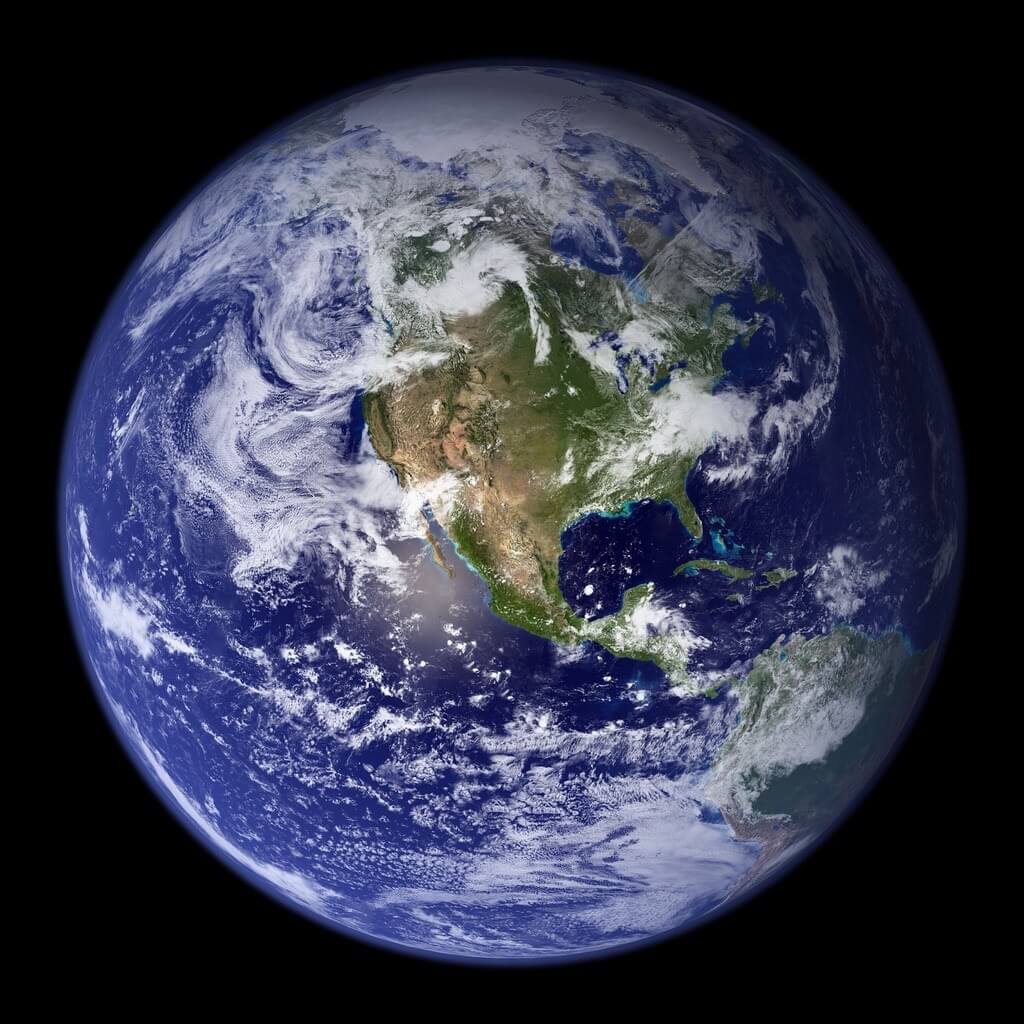 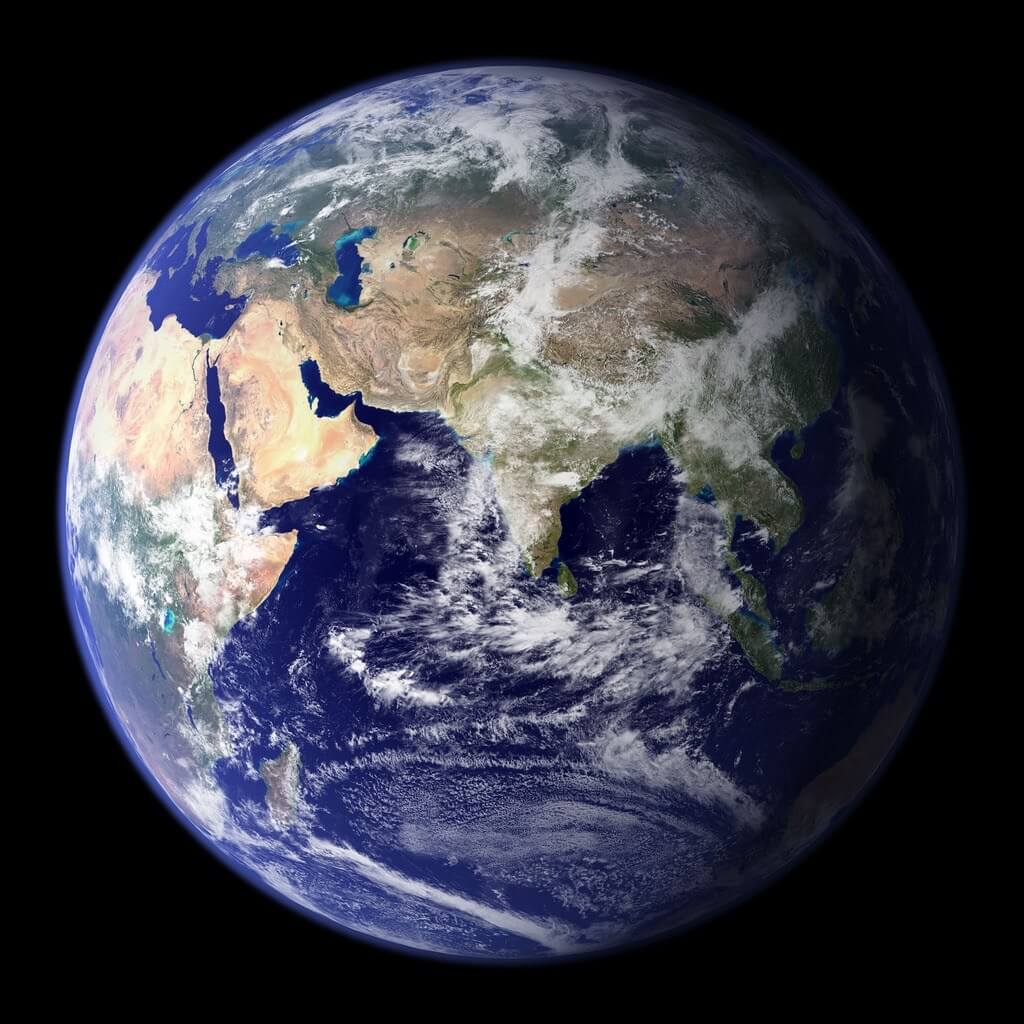 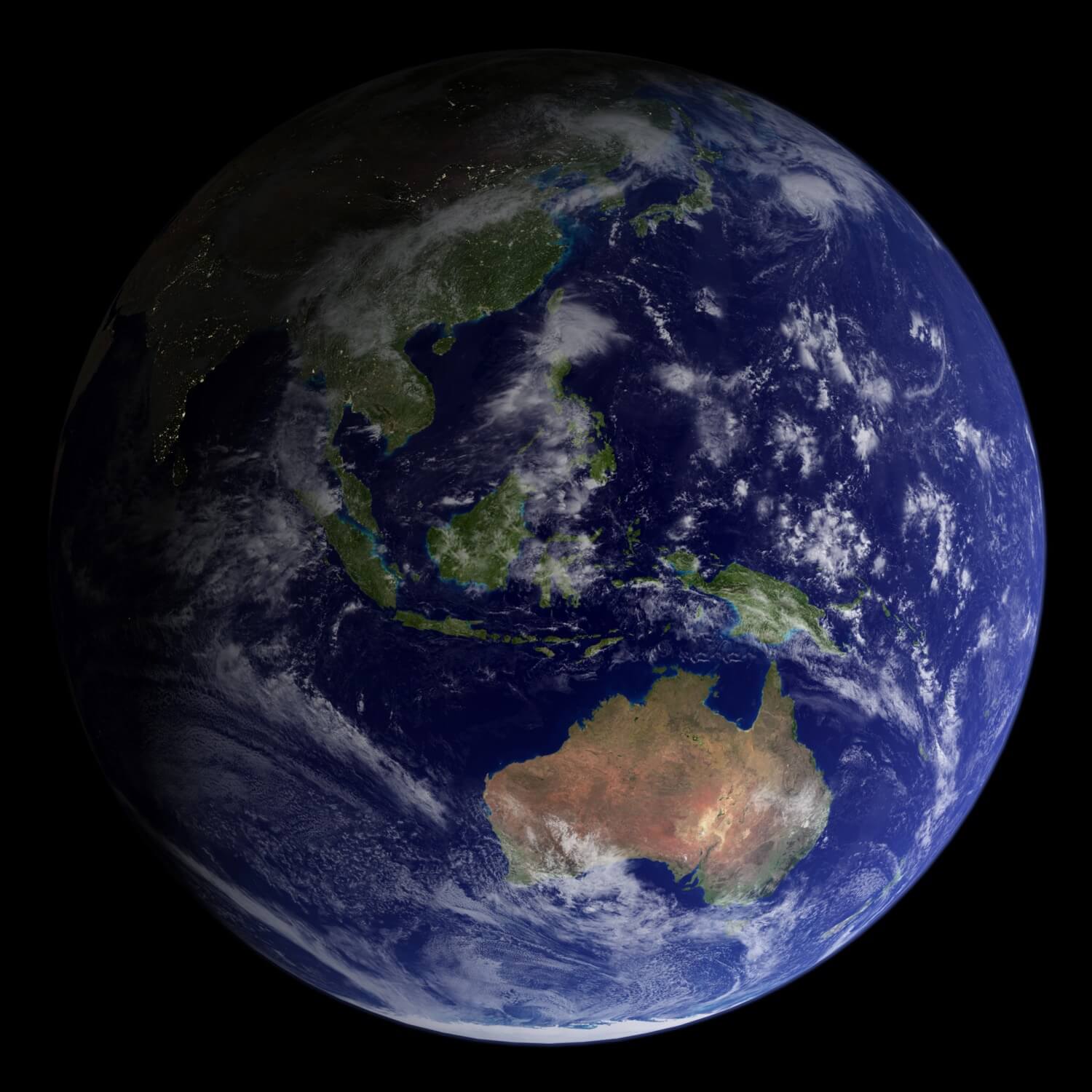 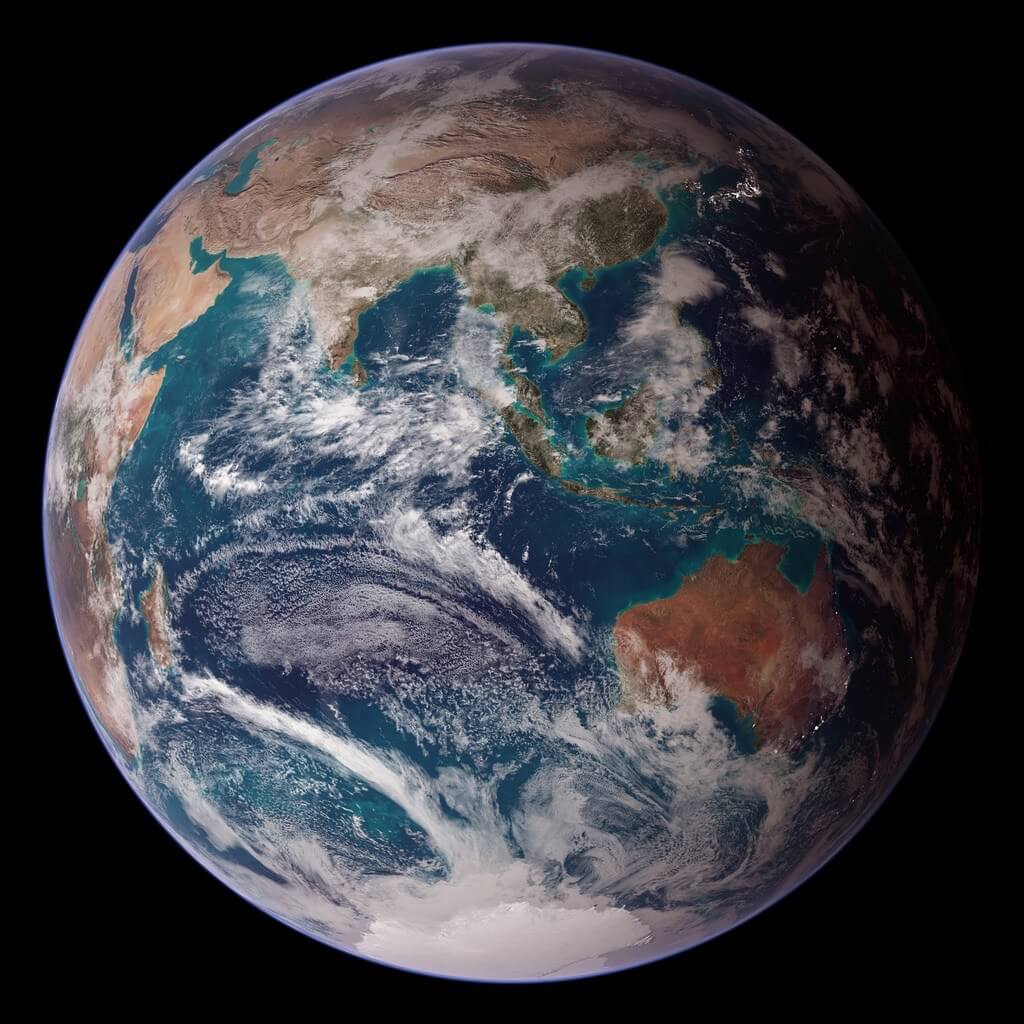 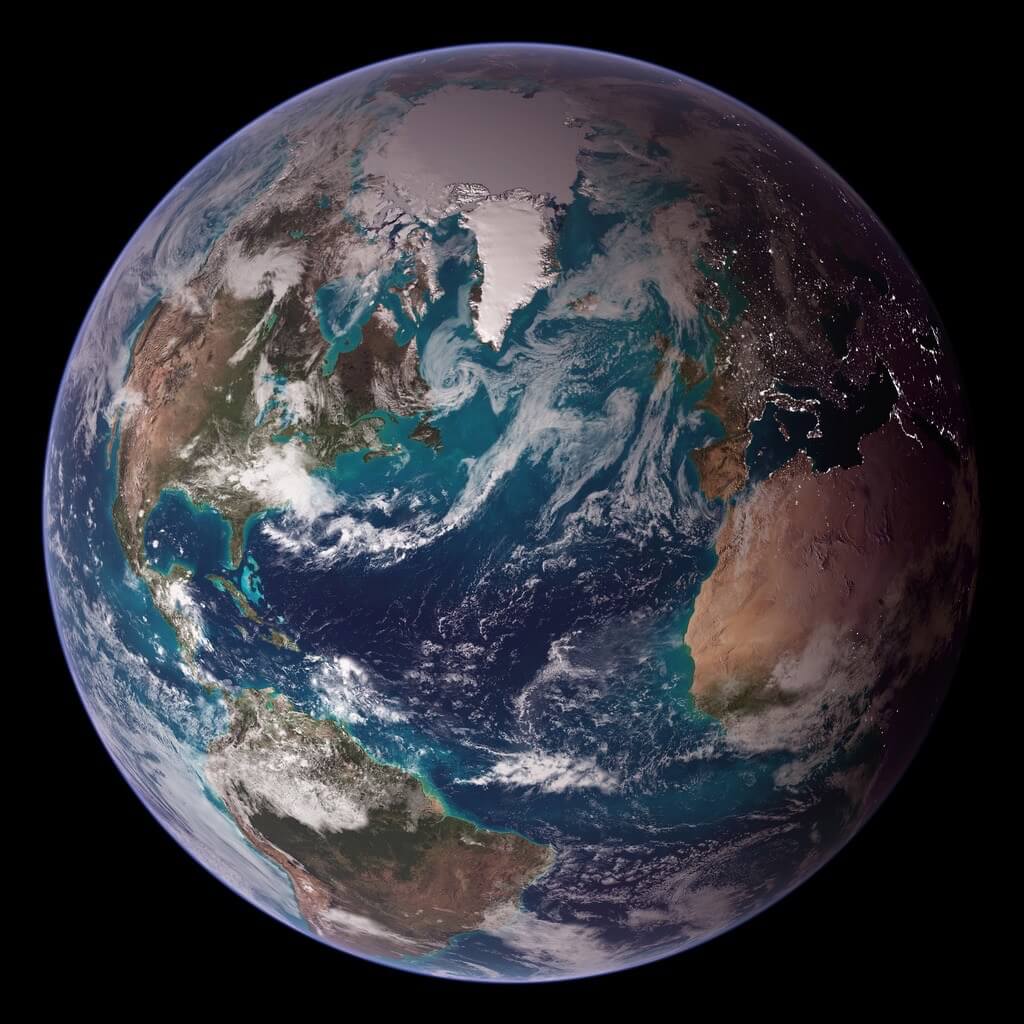 The Blue Marble images that NASA released in 2002 and 2007 were created using a group of satellites, known together as the Earth Observing System (EOS). Each EOS satellite has a specific focus or mission, which has led to valuable insights about Earth. But with advances in technology, it’s time for a new generation of satellites that can provide more in-depth data, specifically about climate change.

The Suomi NPP satellite is the first step towards this new satellite system. Launched in 2011, it orbits the Earth about 14 times every day, collecting data about pollution, climate change, natural disasters, and weather conditions.

Suomi carries several instruments, but the most important one is the Visible/Infrared Imager Radiometer Suite (VIIRS), which detects light in a different wavelengths (including colors.) With this instrument, Suomi can observe wildfires, gas flares, and city lights, among other things.

Using data from the VIIRS, scientists and designers can also create stunning images of Earth. They no longer need to combine data from several satellites. Instead, they can create composite images using data from Suomi alone.

To learn how the following composite images were created, check out this explanation from NASA. 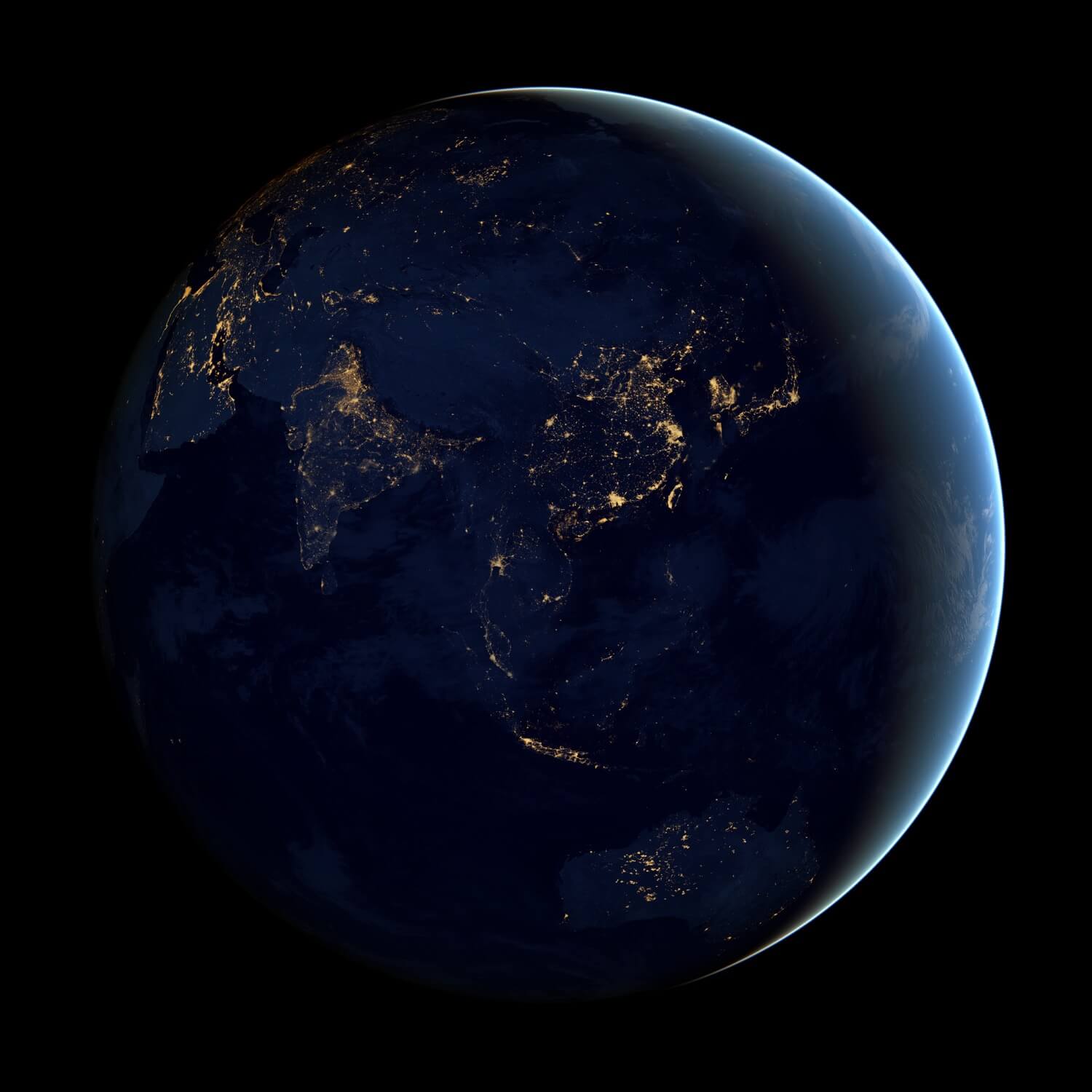 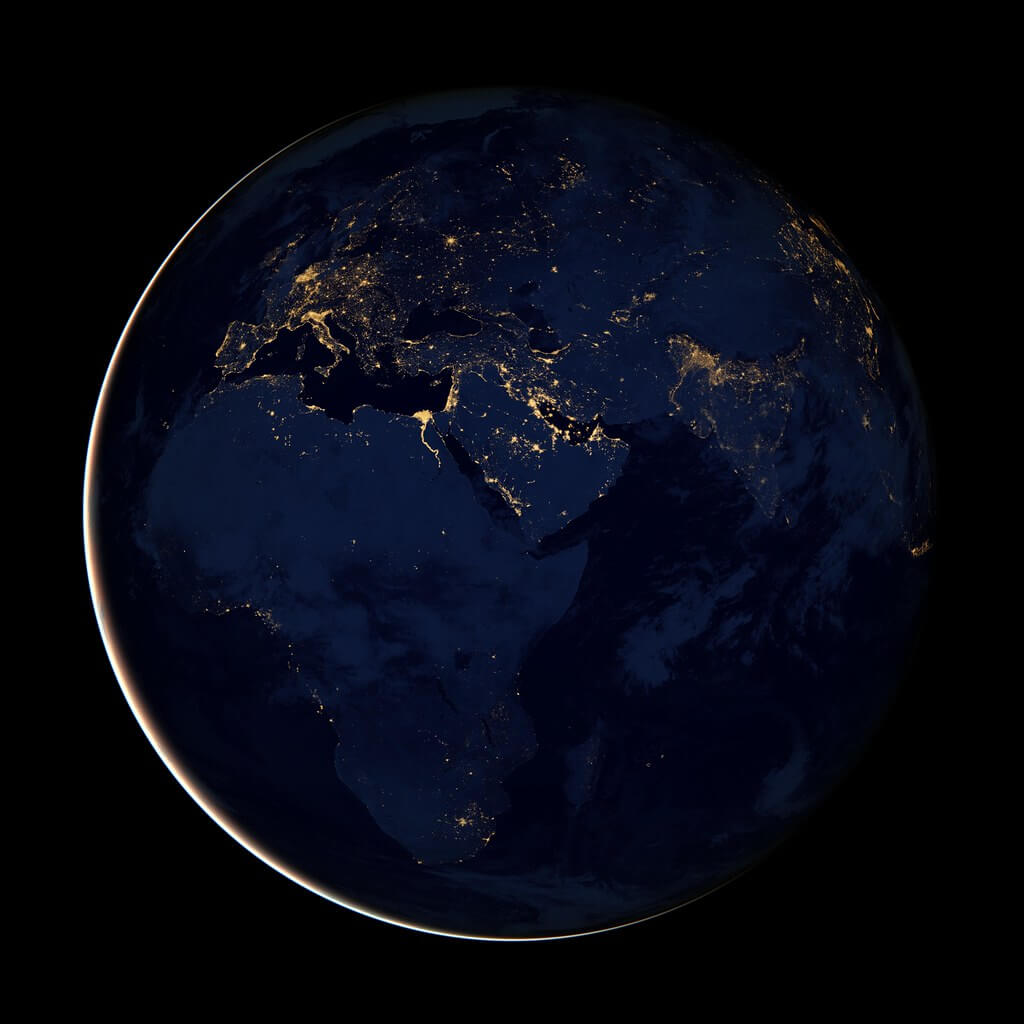 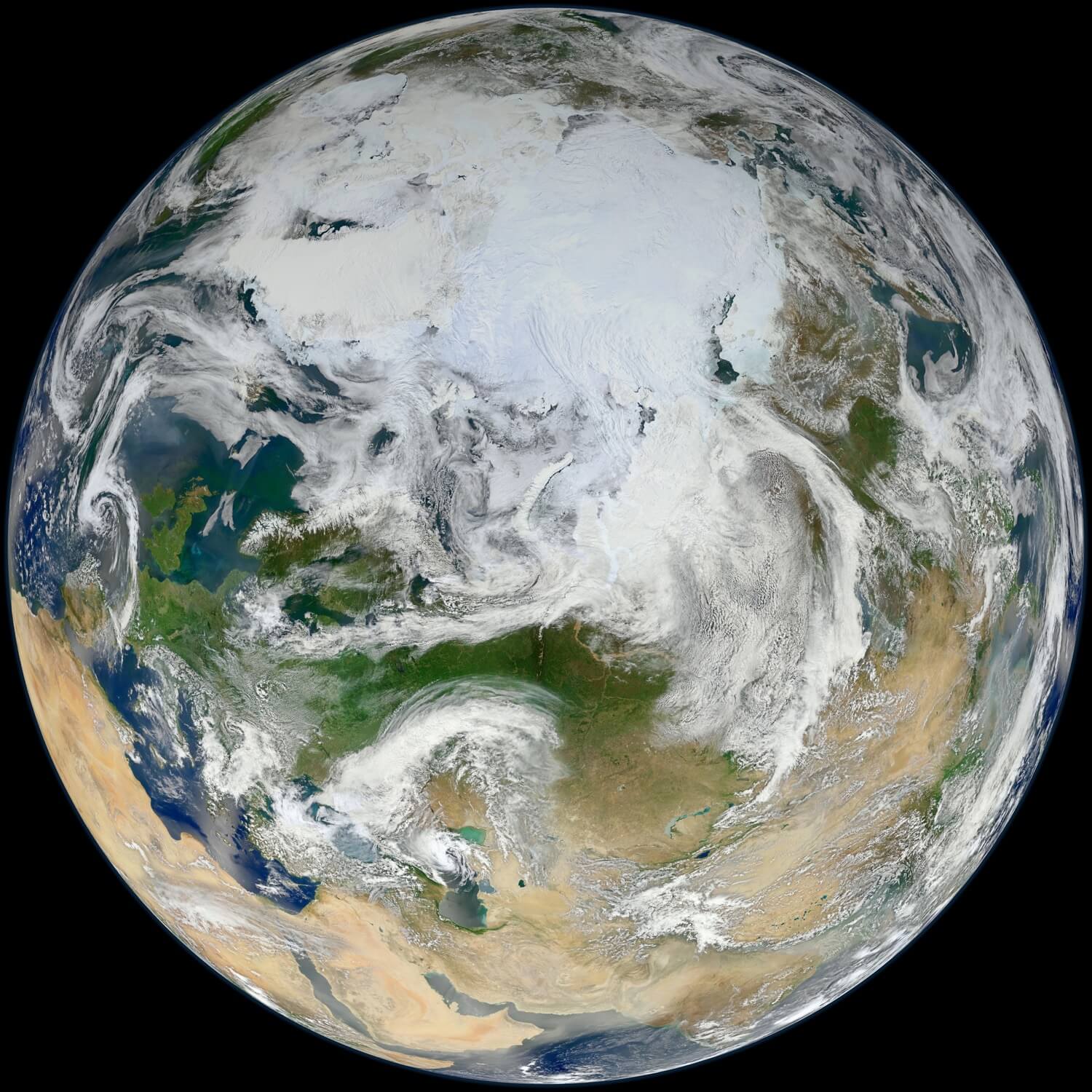 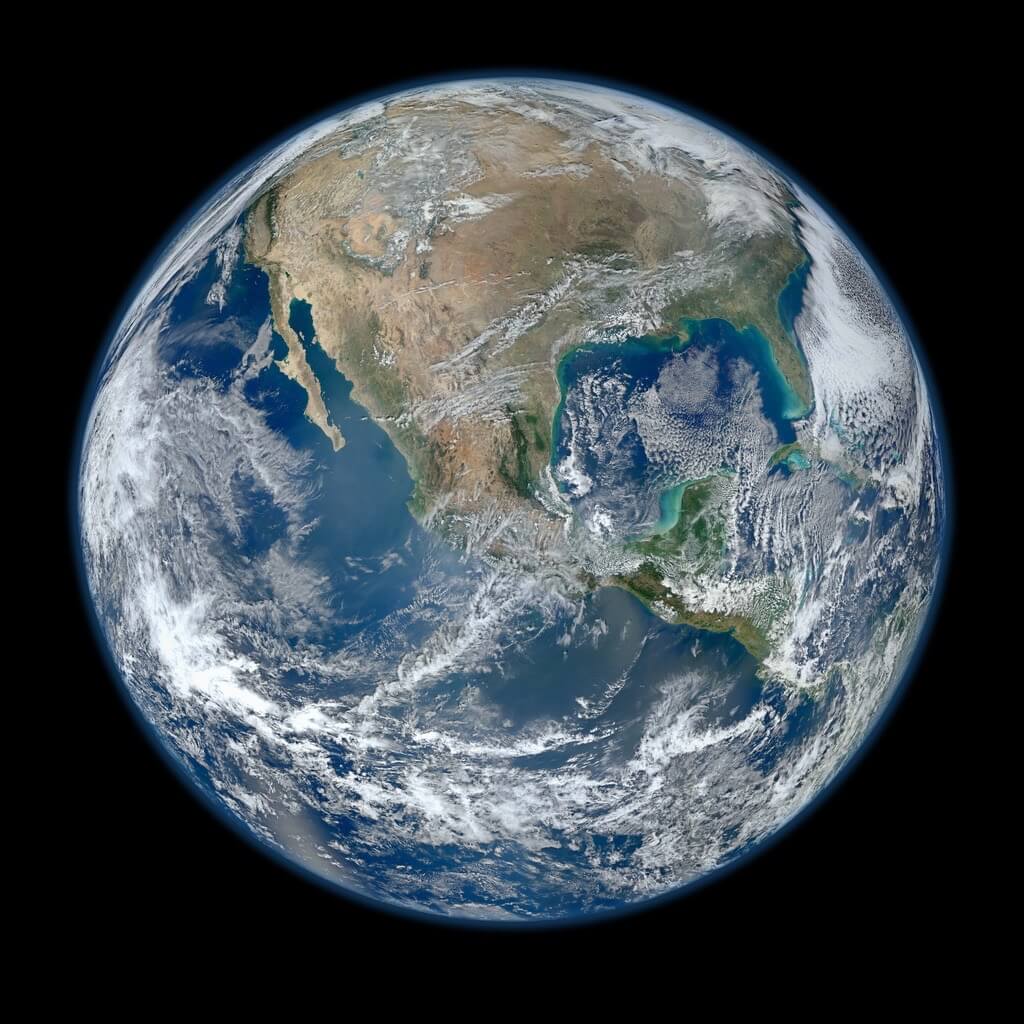 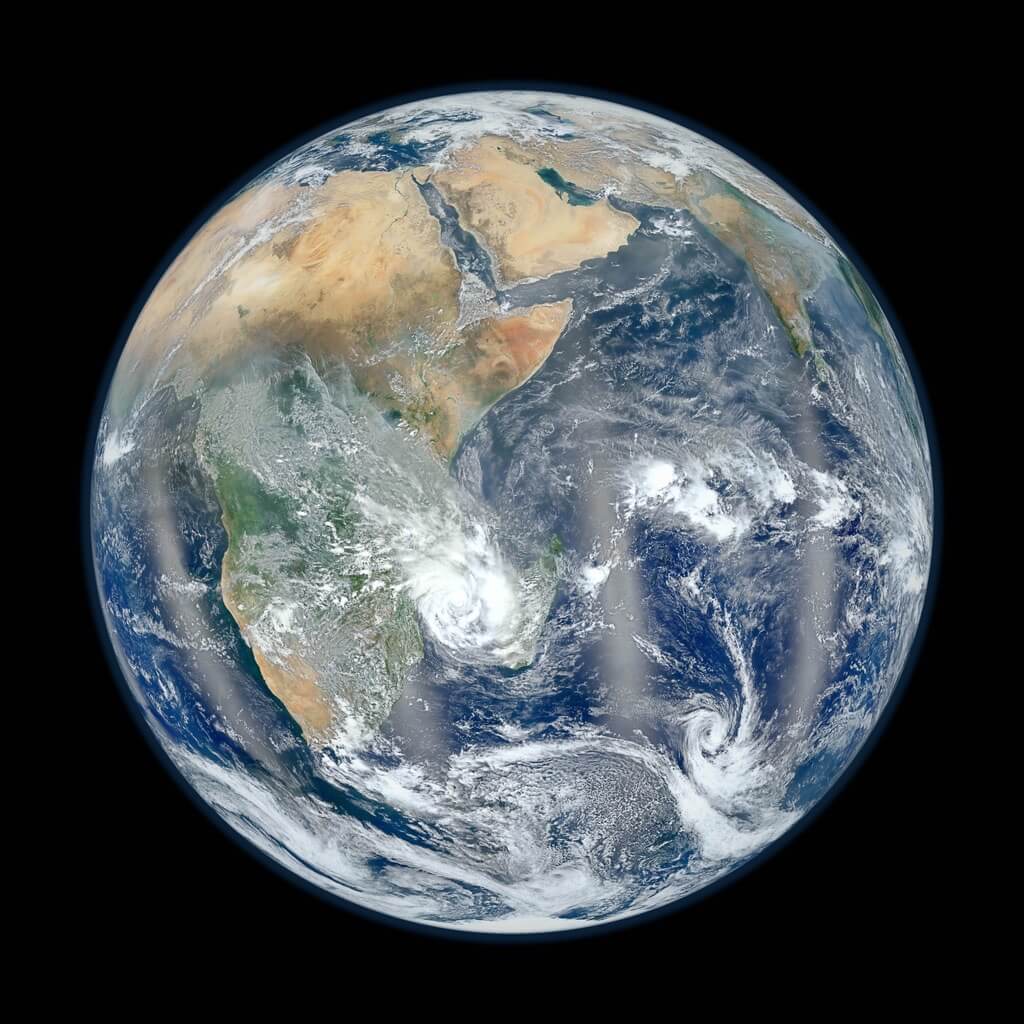 A Sky View of Earth 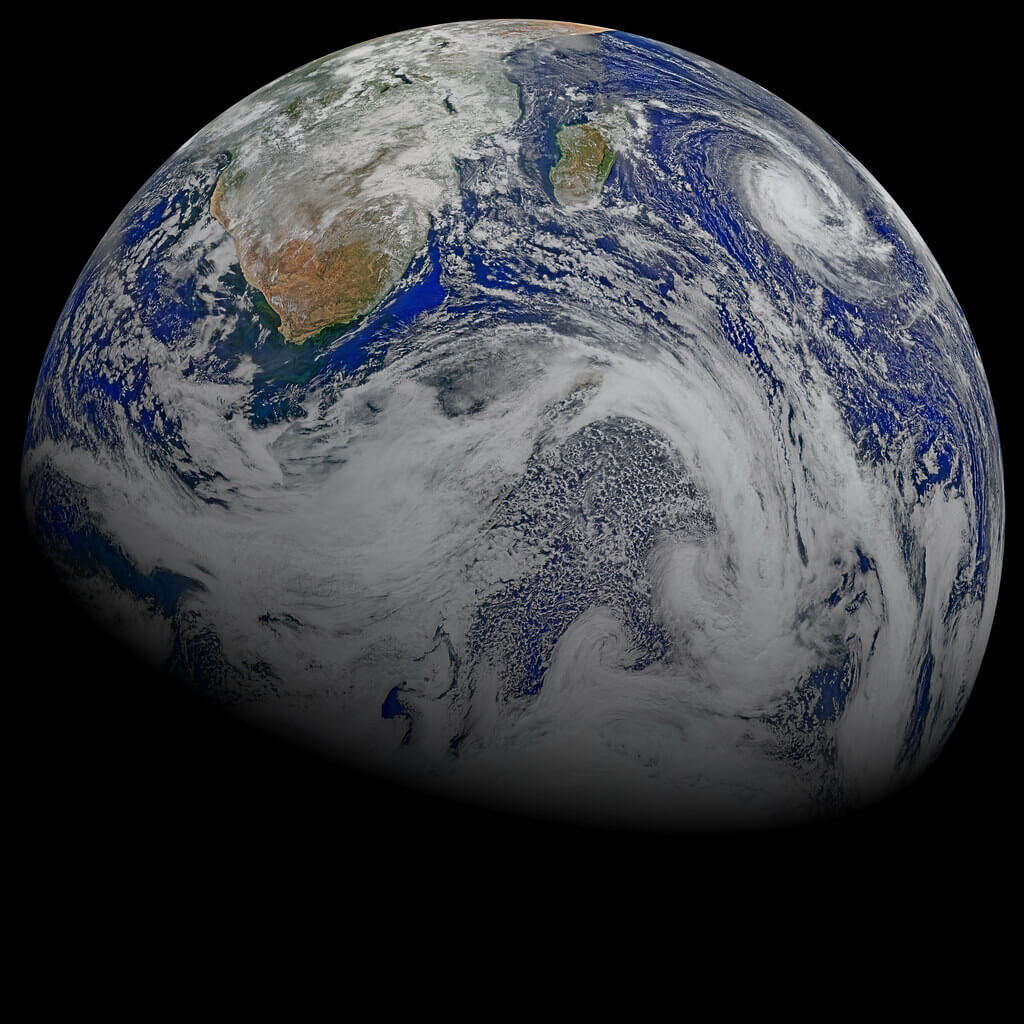 Of course, the Suomi and EOS satellites aren’t the only ones in space. There are over 5700 satellites around Earth, though less than half of those are still operating. The rest have outlived their purpose and are now space junk.

Nevertheless, there are still 2600+ satellites in use, and not all of those are for communication. A handful of countries have weather satellites, for example. Along with recordings from the International Space Station, these satellites work together to monitor weather around the globe. This way, we can track major storms regardless of where they are in the world.

Tropical storms (i.e. hurricanes, typhoons, and cyclones) have a unique shape that’s immediately recognizable from space. “You can feel the power of the storm when you stare into its eye from above,” astronaut Nick Hague said about Hurricane Dorian in 2019. Even from so far away, the storm’s swirling clouds and circular center are powerful to see.

Hurricane Dorian Seen From Aboard the Space Station – September 2, 2019 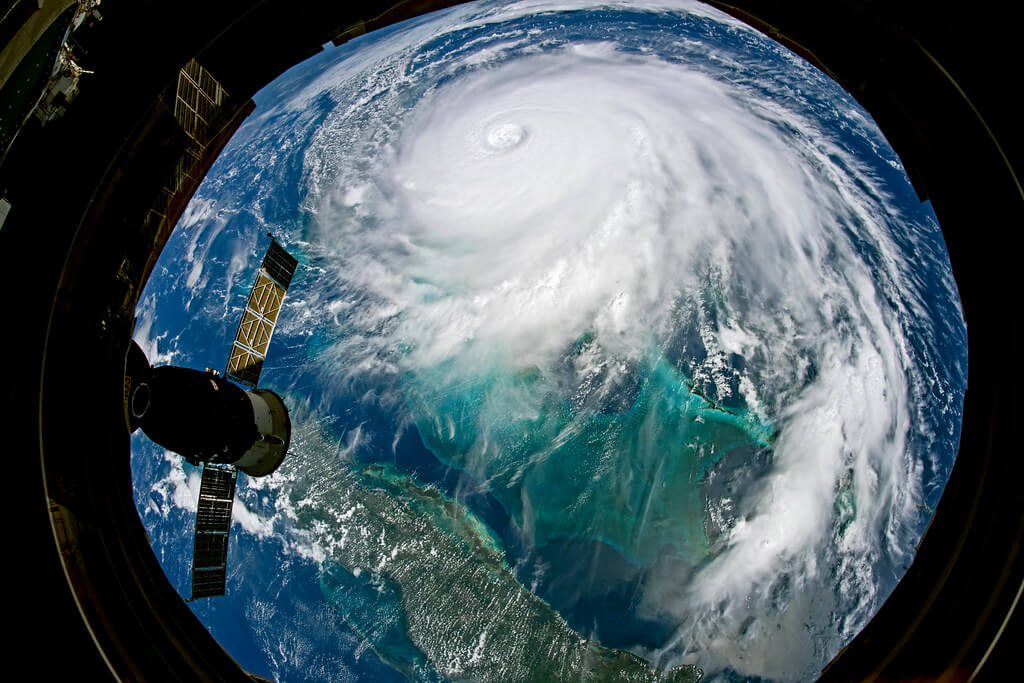 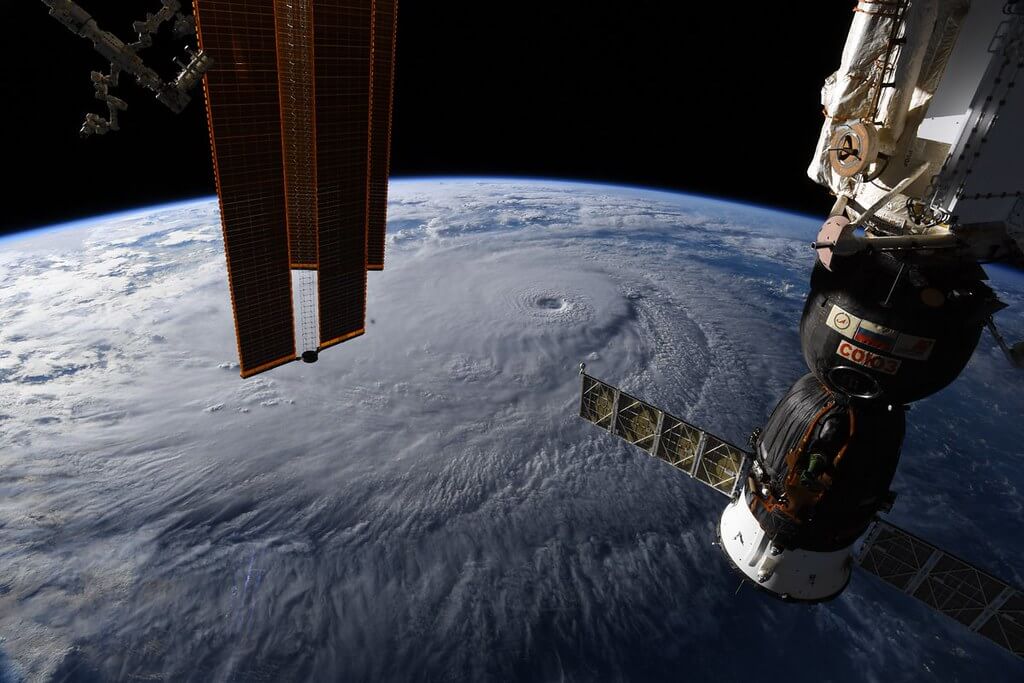 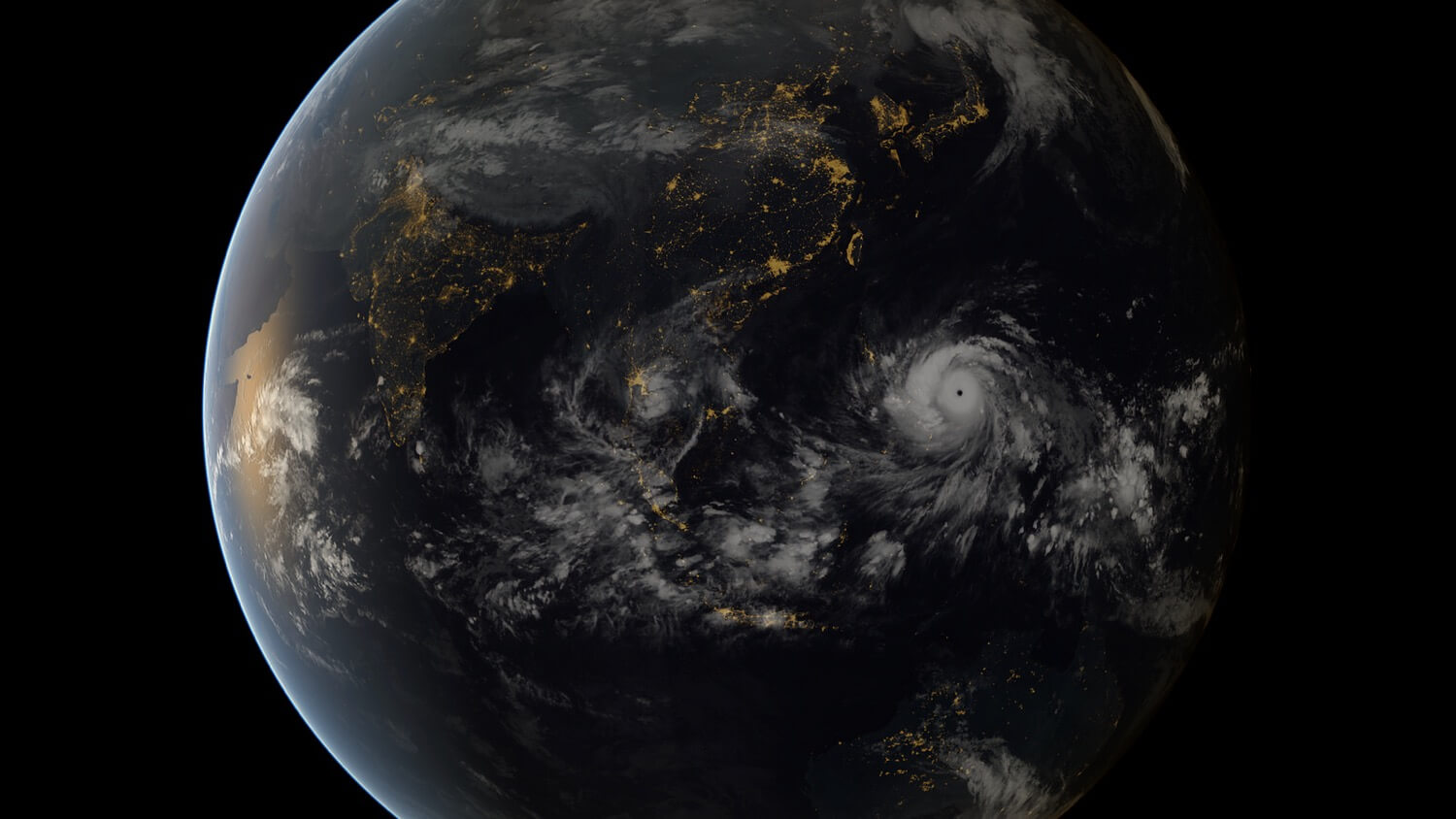