Ilan Ben Yehuda is a street photographer based in Ramat Gan, Israel, just east of Tel Aviv. Though he has had a long career in graphic design, photography has also been a big part of his life. He studied photography at Camera Obscura, an art school in Tel Aviv, and he’s been seriously shooting for nearly 10 years.

Initially, many of his photos were documentary. He focused on harsh scenes of homelessness and took portraits of drug addicts around the old central station in Tel Aviv. One day, though, he took a picture that changed his entire approach to photography. It was a photo of a dog looking at a man wearing a dog-patterned jacket. You can see the photo and read about his change in perspective in this interview.

After taking that decisive, humorous photo, he began to look for more interesting, meaningful scenes that verged on the surreal. Instead of trying to find tough stories, he started to focus on creating narratives by playing with composition. 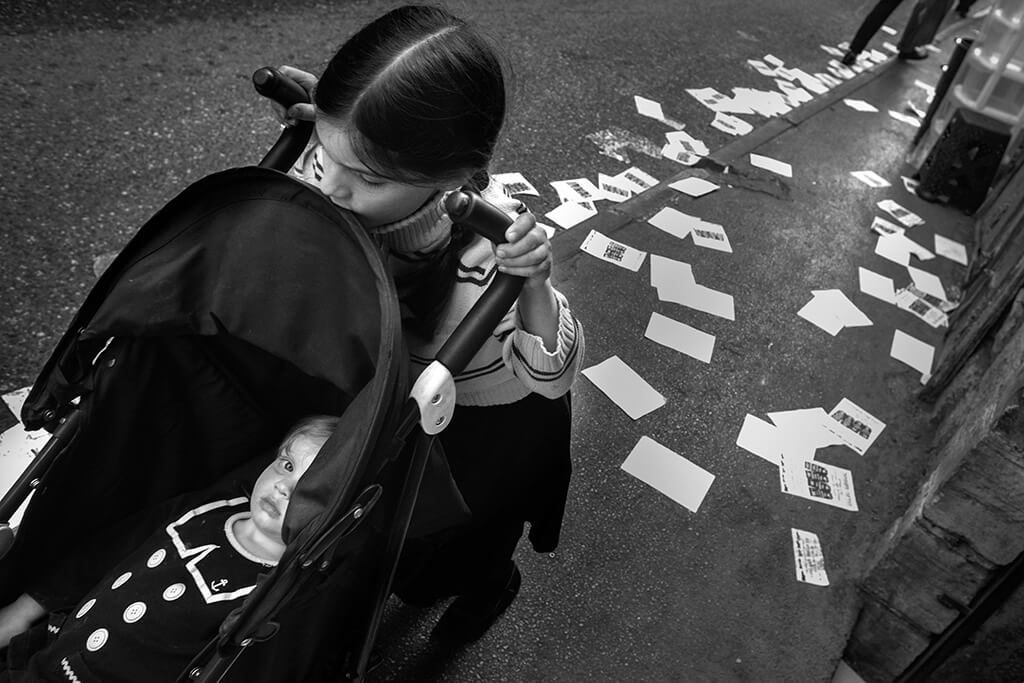 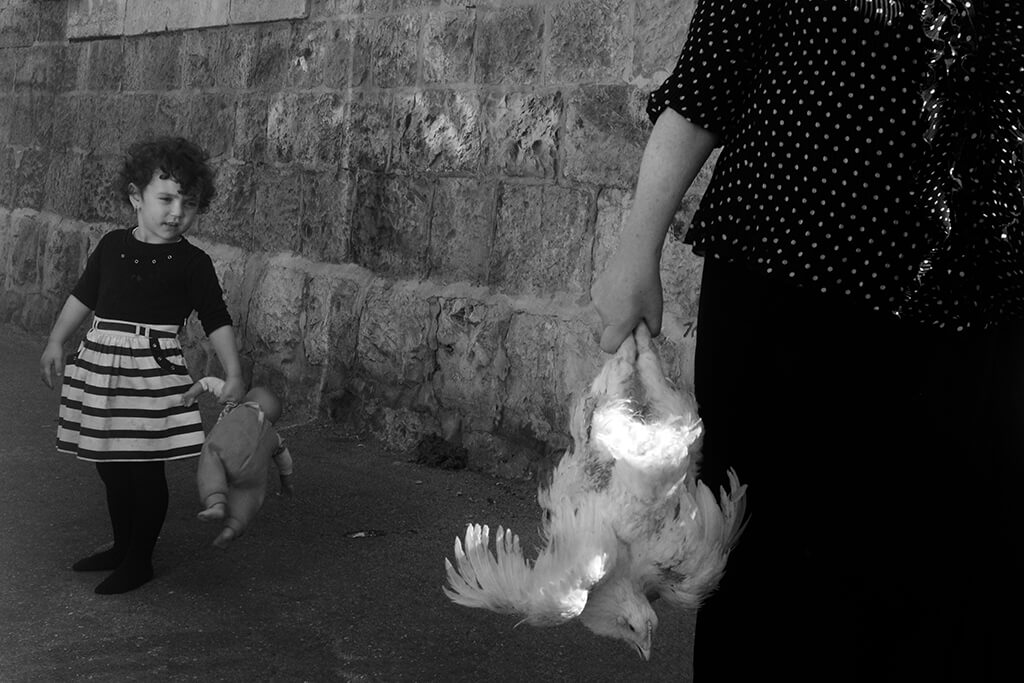 Around this time, he began visiting Mea Shearim, an ultra-Orthodox neighborhood in Jerusalem. At first, he was nervous about visiting this neighborhood because he had no contacts within the community, and he wasn’t sure how they’d respond to his presence.

“The residents of Mea Shearim are not exactly photography lovers,” he says. “[They] oppose modern Western life and a secular Jewish state. Their purpose is to live according to the laws of the Bible.”

He wasn’t thrown out, though. In fact, over time, they got used to his presence. “I made social connections and even was invited to photograph events,” he says. In addition, a few photos from the series won first prize in a photography competition in Israel and were exhibited in a museum and the local newspaper. 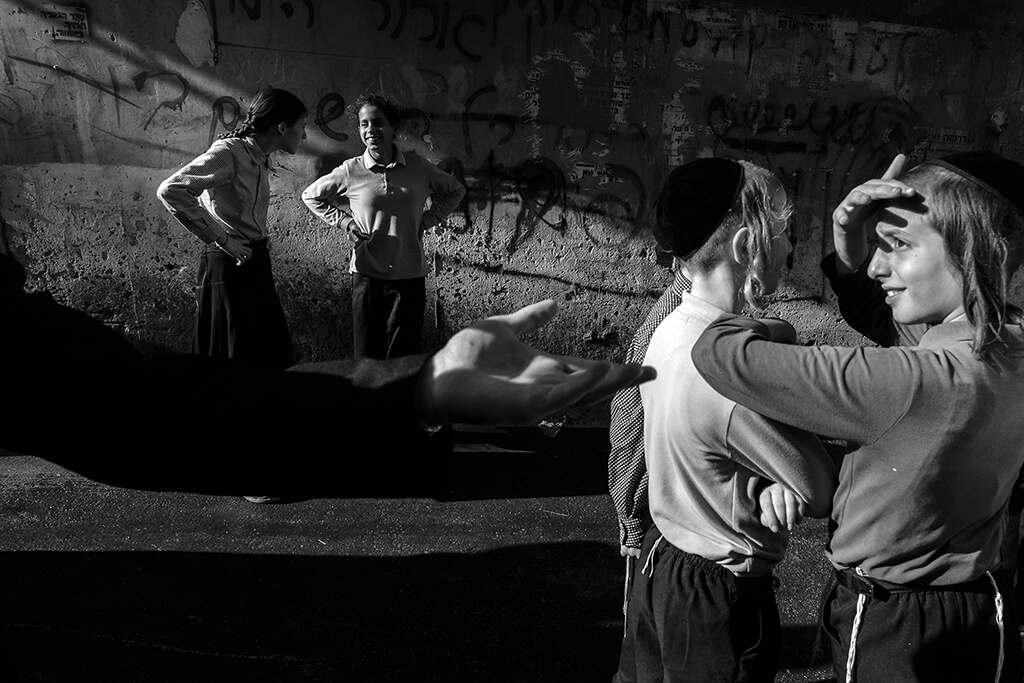 However, even with this support, the photos weren’t always easy to take. He had to be very careful and constantly aware of the community’s rules.

He also had to be very discreet. “For many of them, the act of taking photos is an abomination. So, you have to hide the act of shooting because when they see it, most of them cover their faces. Some of them can get angry, and extremist orthodox can be violent. Many photos I shoot from my belly without looking at the viewfinder.” 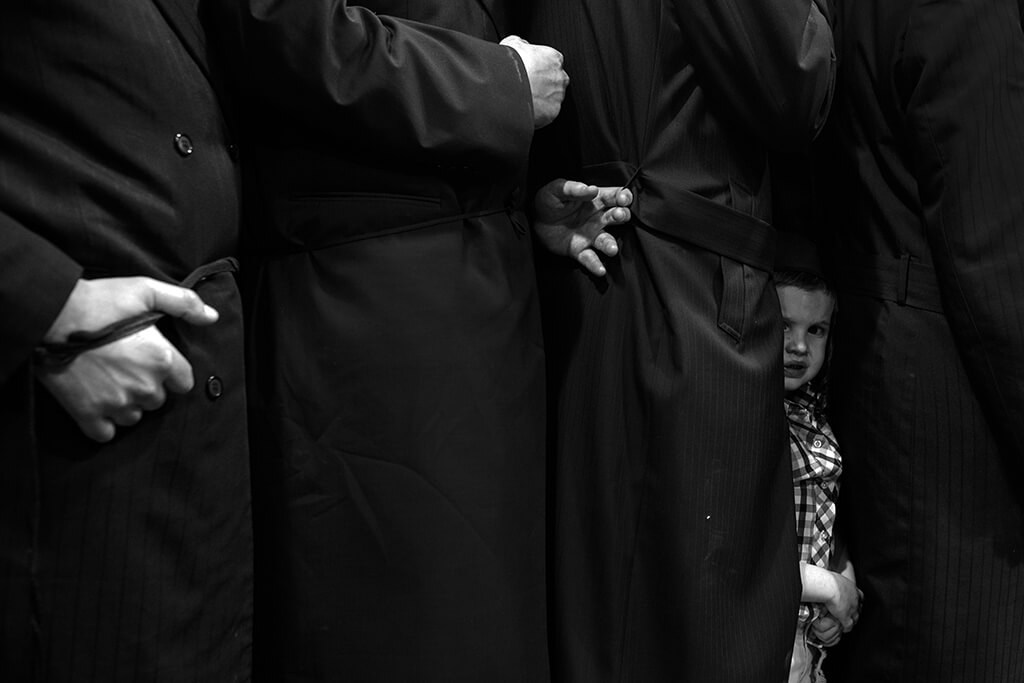 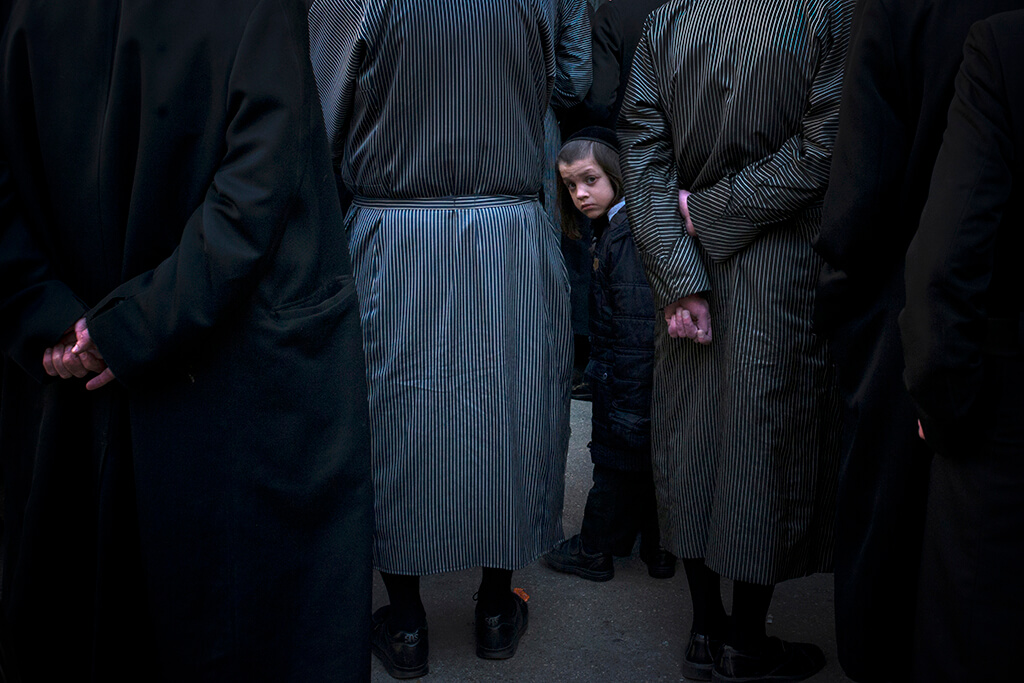 One common thread through his Jewish Streets series is the presence of children. This focus on children came naturally to him for two reasons. “First, Mea Shearim is a place of children. Each family has about 12 kids or more, so it’s the first thing that catches your eye when you visit.”

Later, they became a source of inspiration. Their expressions, games, and clothes came to fascinate him. “They seem to belong to another era,” he says. Yet, at the same time, they had the timelessness of youth. Their naivety and playfulness sparked his creativity.

“The children play for me an important role in this series,” he says. “They bring humor, irony, and surrealism. They play a beautiful contrast to the adults and to the Jewish conservative world.”

This contrast is especially apparent in his photo of a colorful clown sitting among men clad in black. The burst of color and the fun it represents is clearly contrasted against the “monochromatic conservative adult world.” 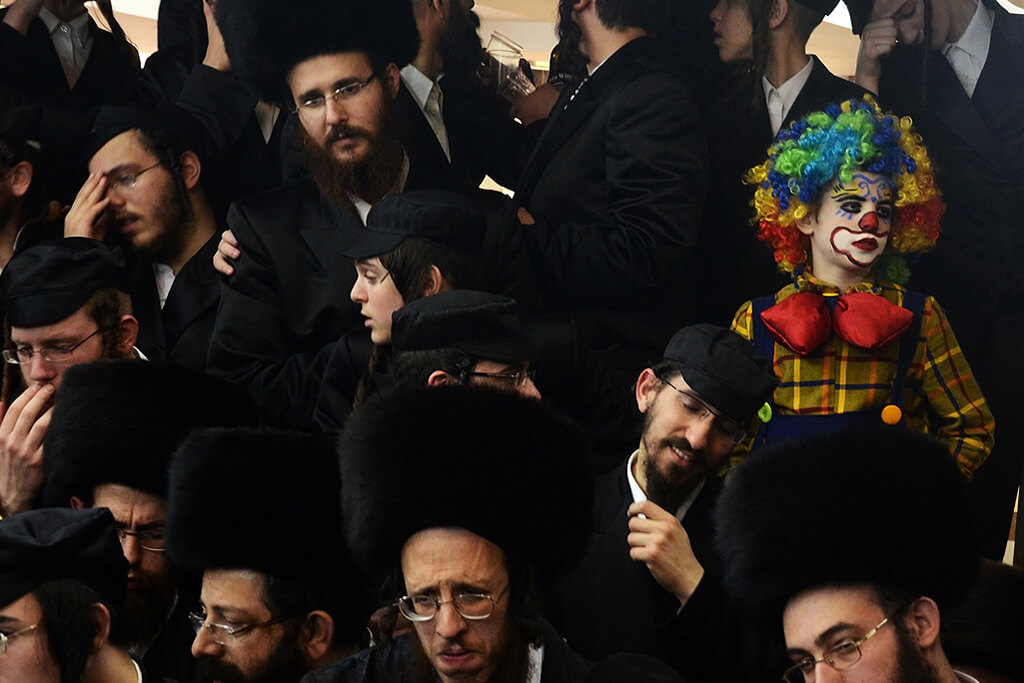 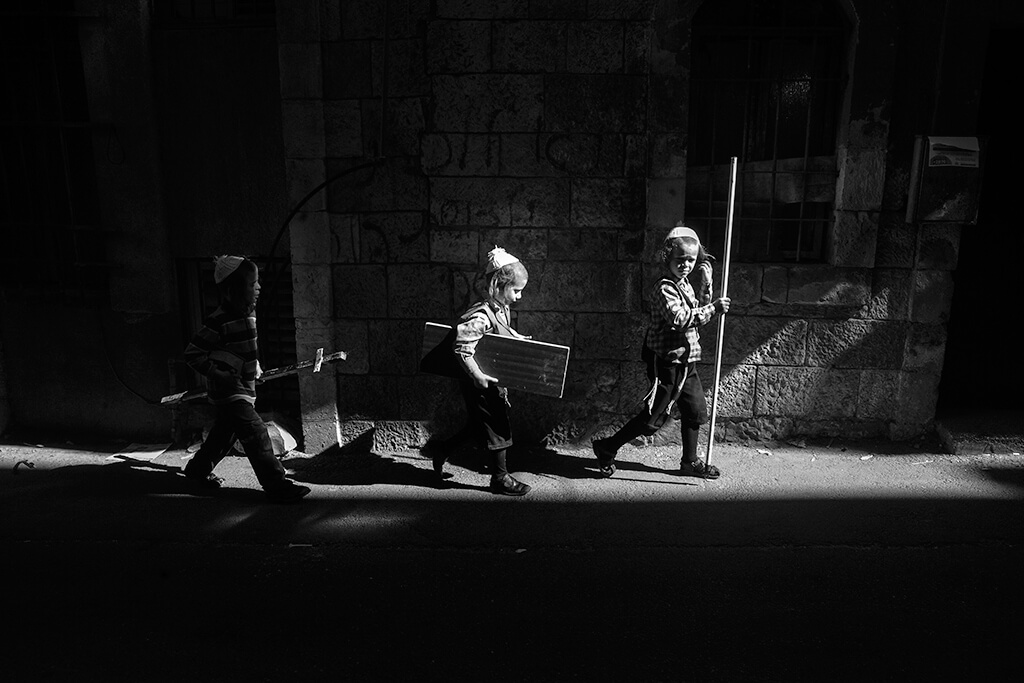 Ultimately, his trips to the neighborhood and the series as a whole came to mean a lot to him. It became more than just an experiment in style or creative expression. It became more personal, relating to his background and identity.

“This series is very close to my heart, and I’ve spent a lot of time shooting it,” he says. “For me, it’s not just street photography; it’s also an attempt to connect to my heritage, my religion, and the Orthodox Jewish world through photography.” 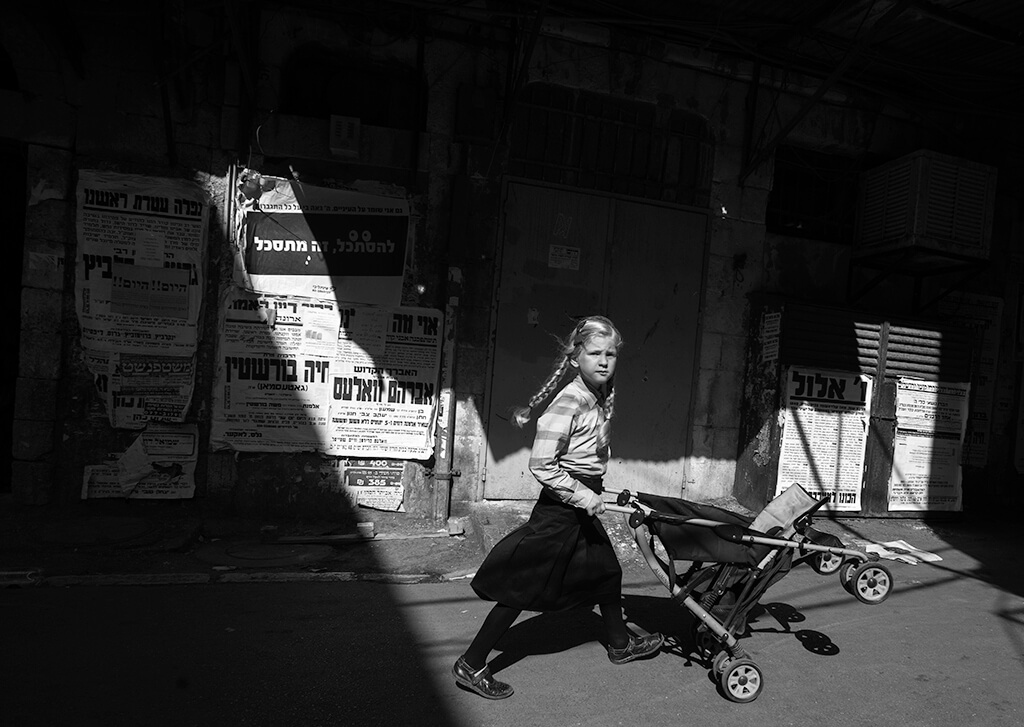 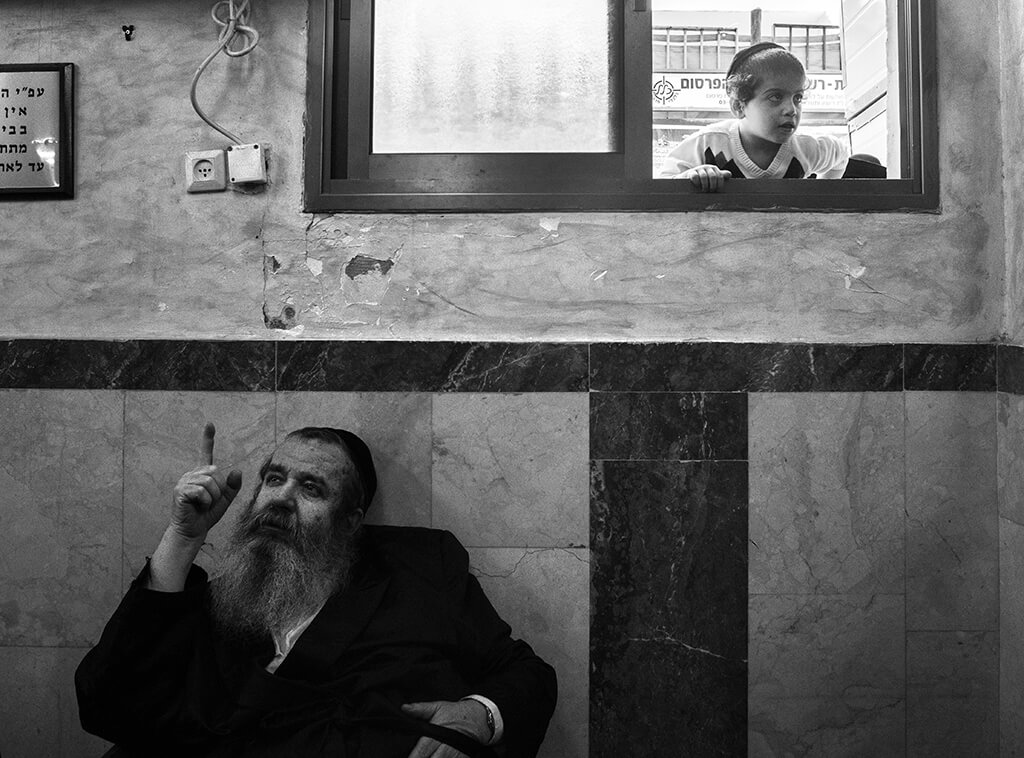 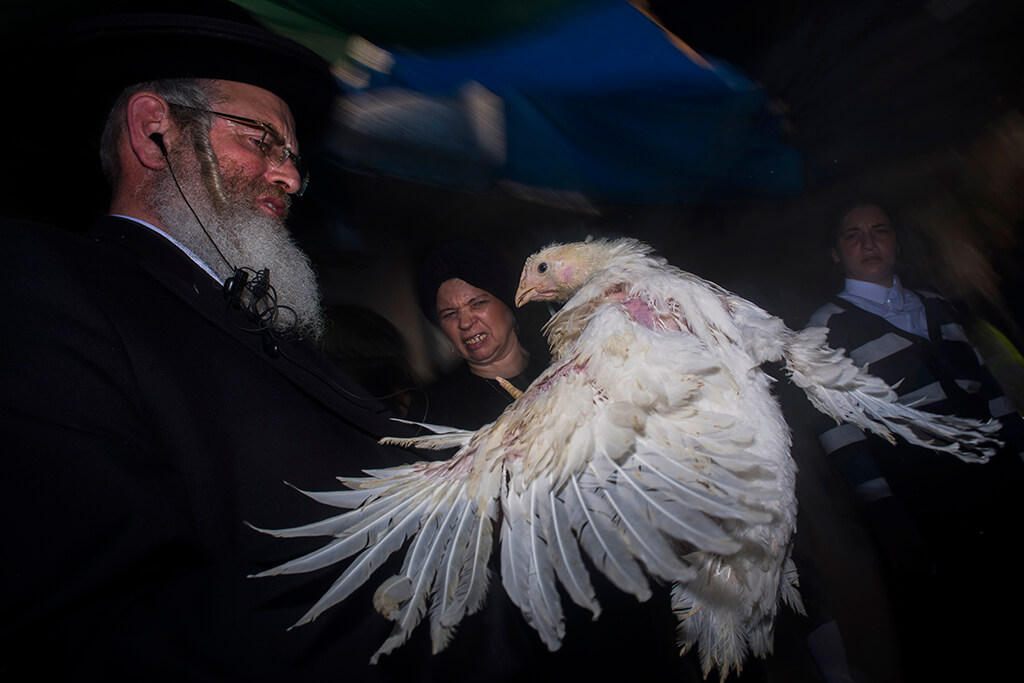 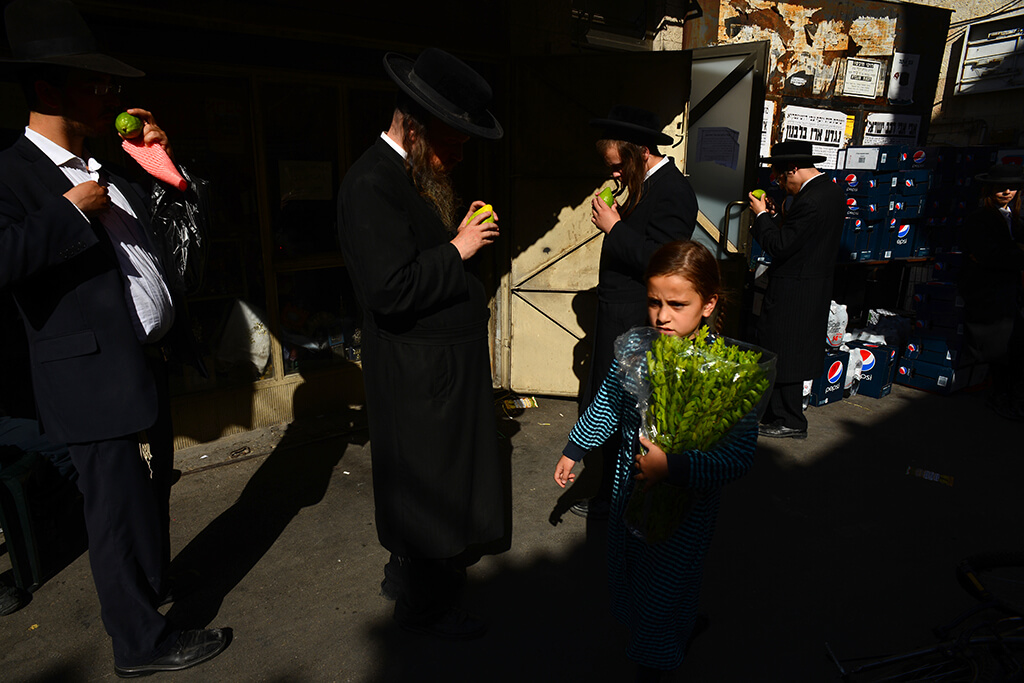 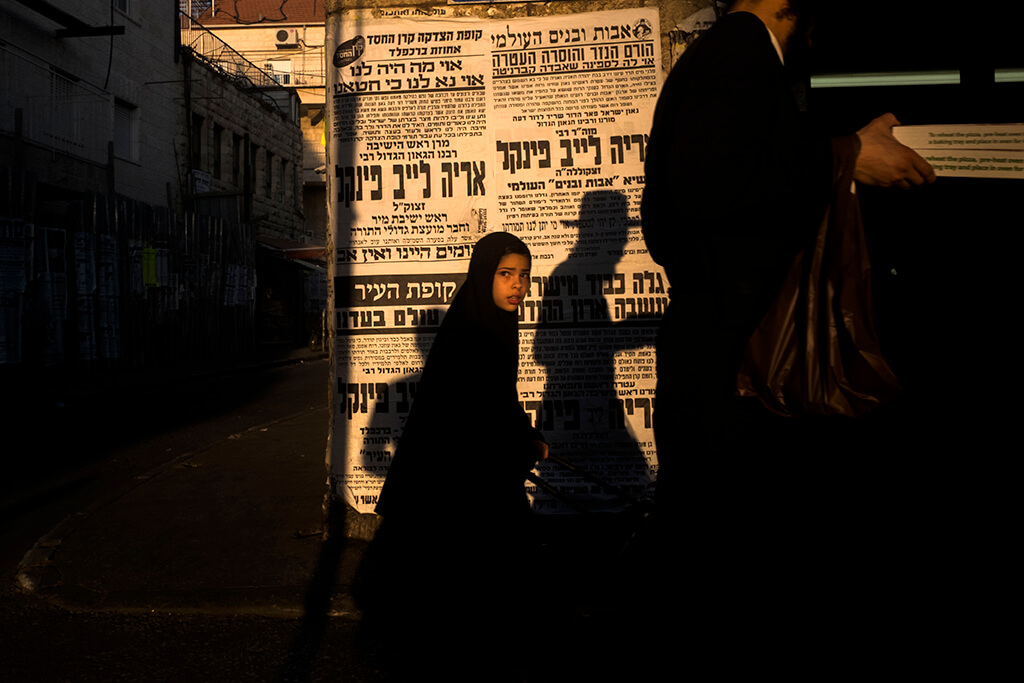 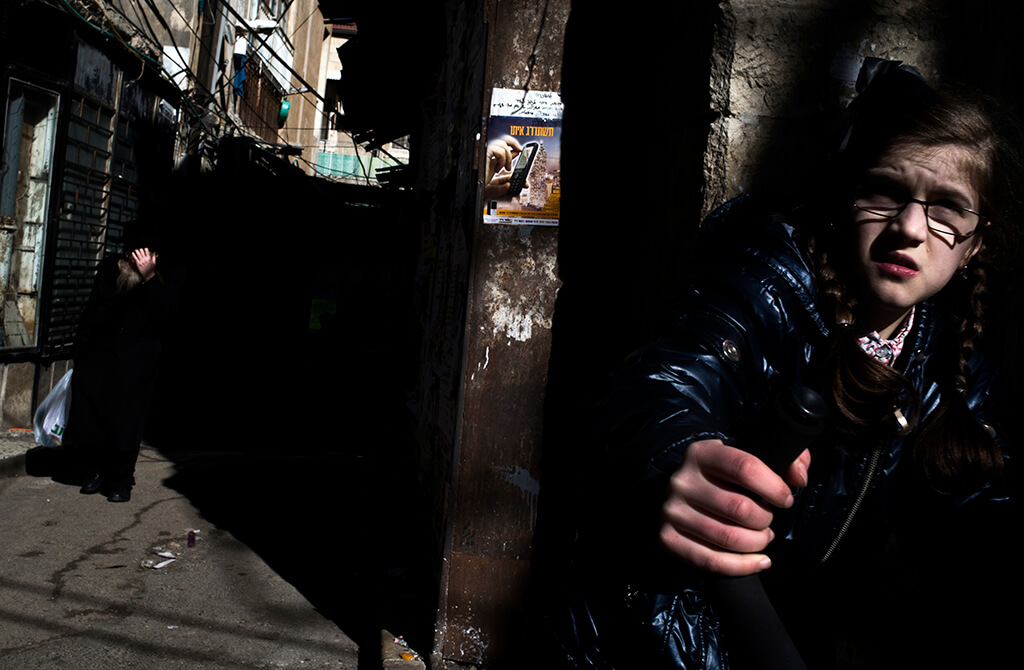 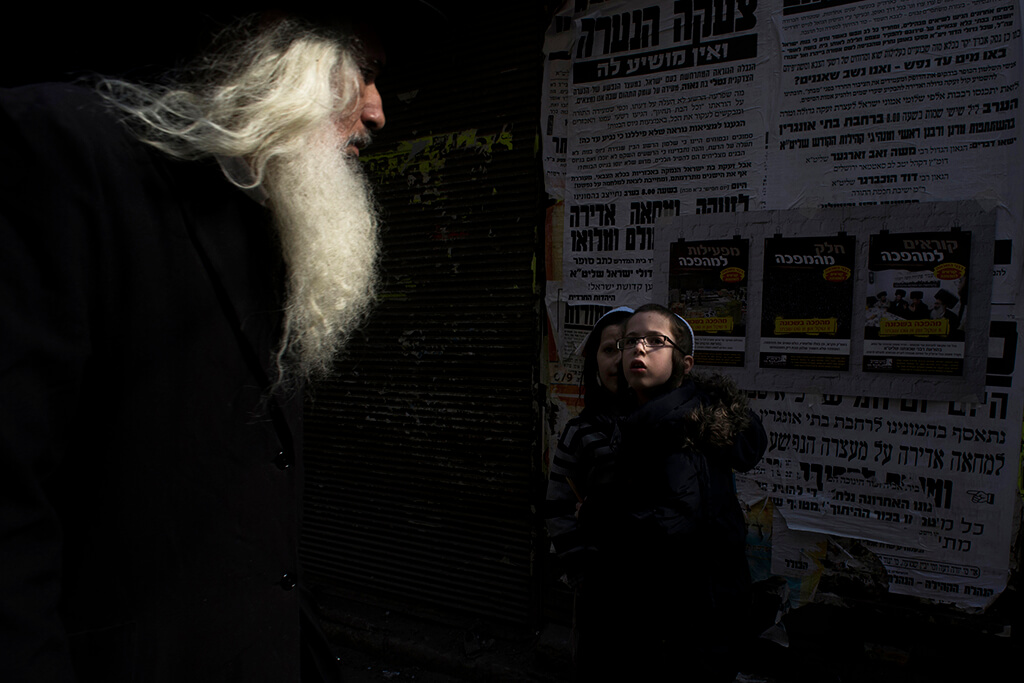 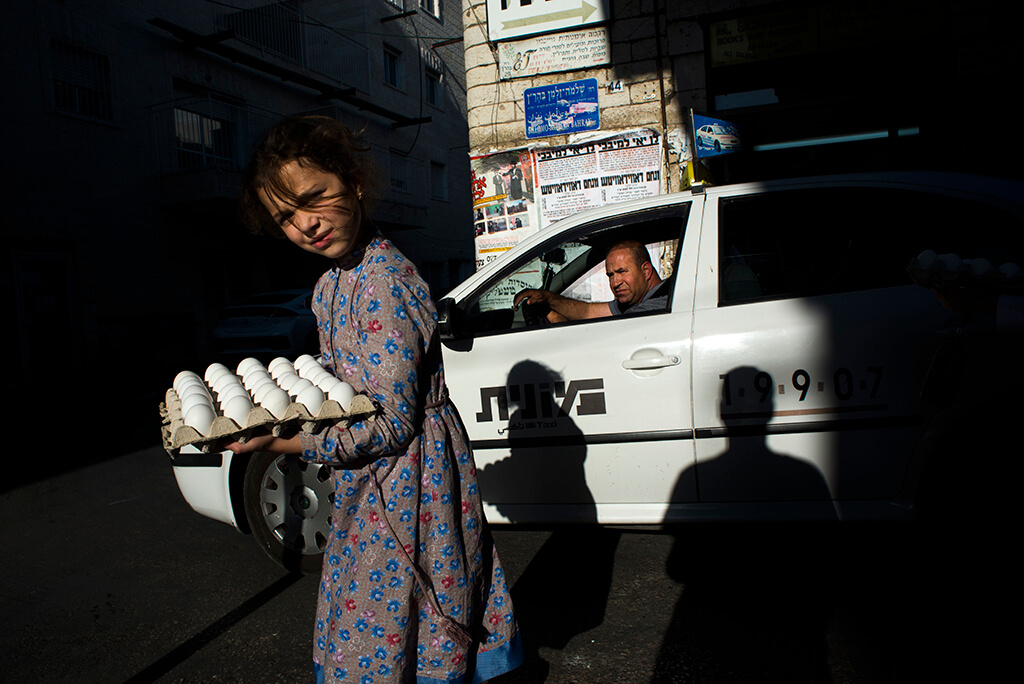 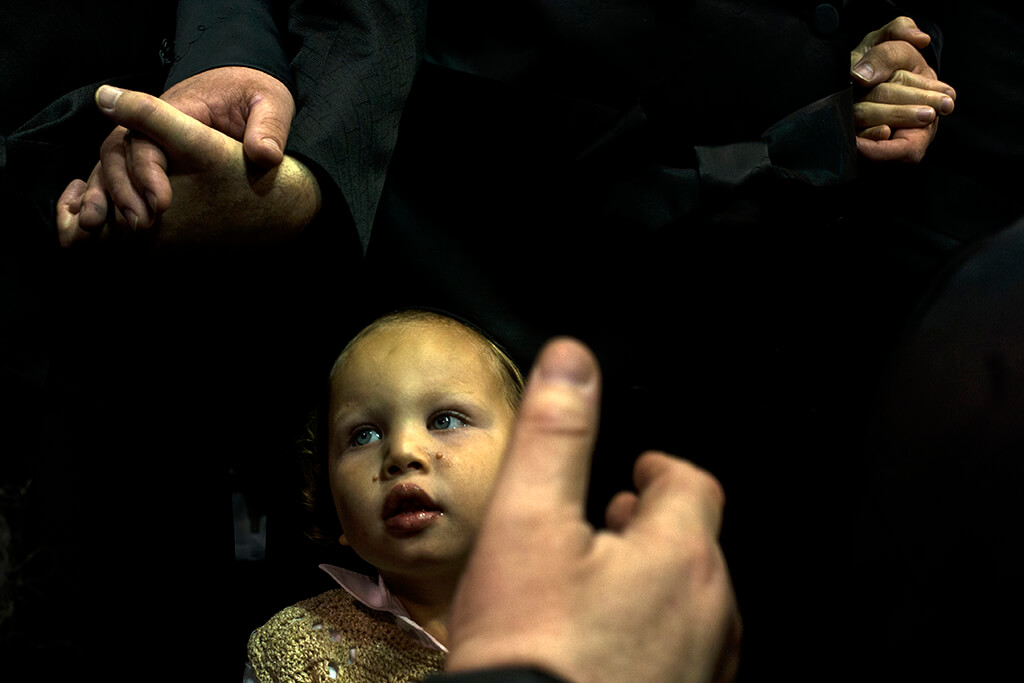 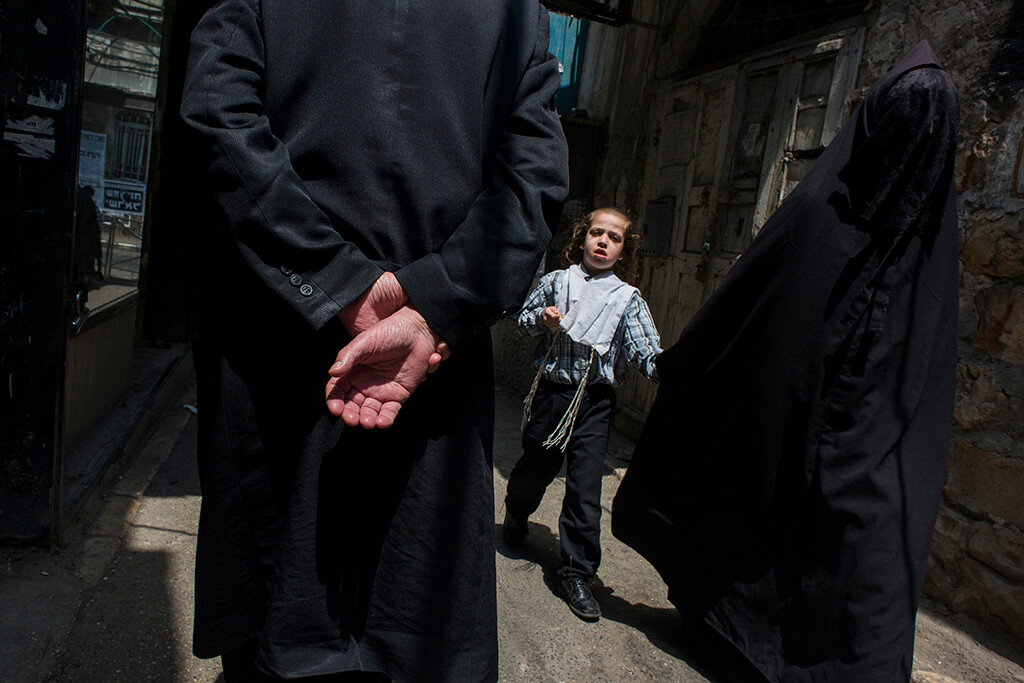 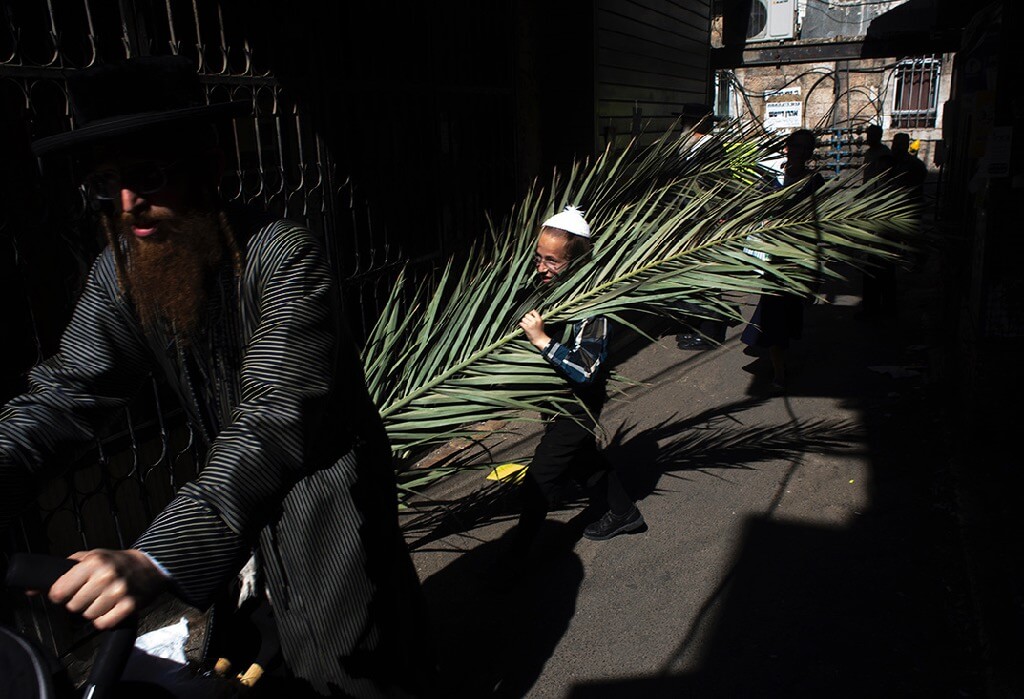 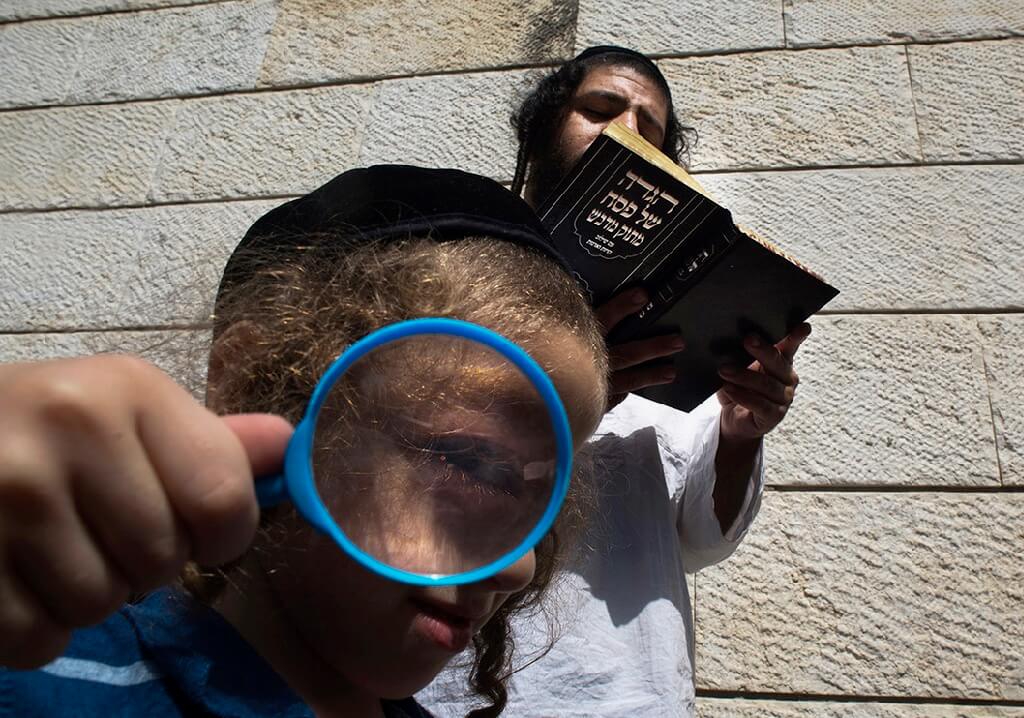 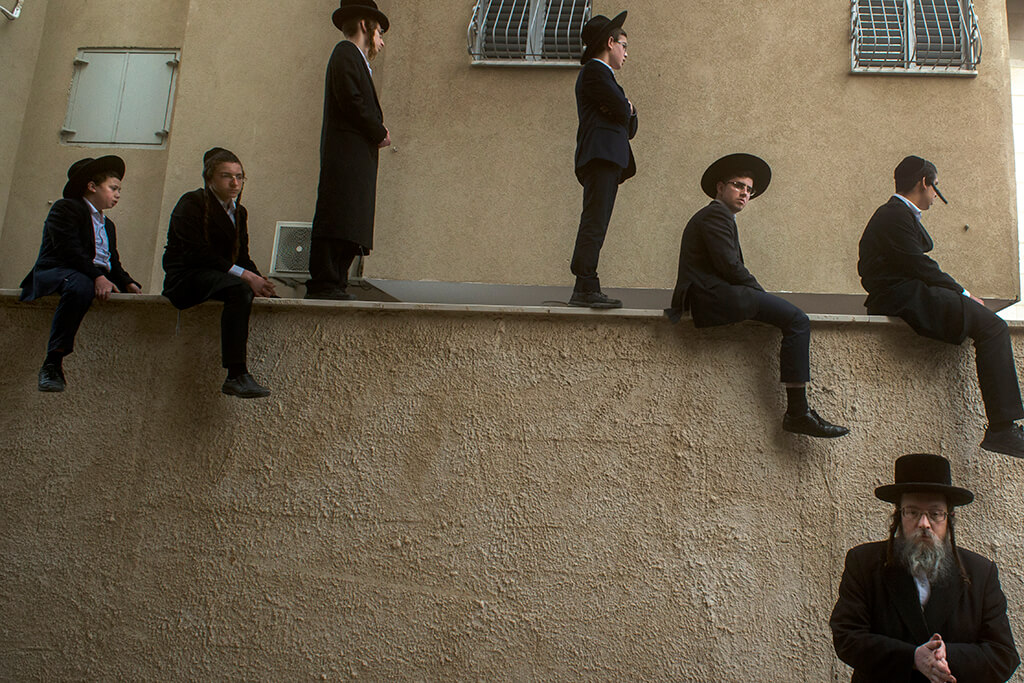