Historical photographers like Lewis Wickes Hine can be a huge inspiration for photographers wanting to make a difference in the world. Even though they took photos long before digital cameras hit the market, their images, techniques, and integrity can help guide photographers even today.

Though Hine was never famous in his time, his work was crucial in the fight against child labor in the United States. His photos helped to reveal the working conditions of children at the beginning of the 20th century, eventually leading to the child labor laws still in effect today.

Spinner. A moment’s glimpse of the outer world. Said she was 10 years old. Been working over a year. Location: Lincolnton, North Carolina 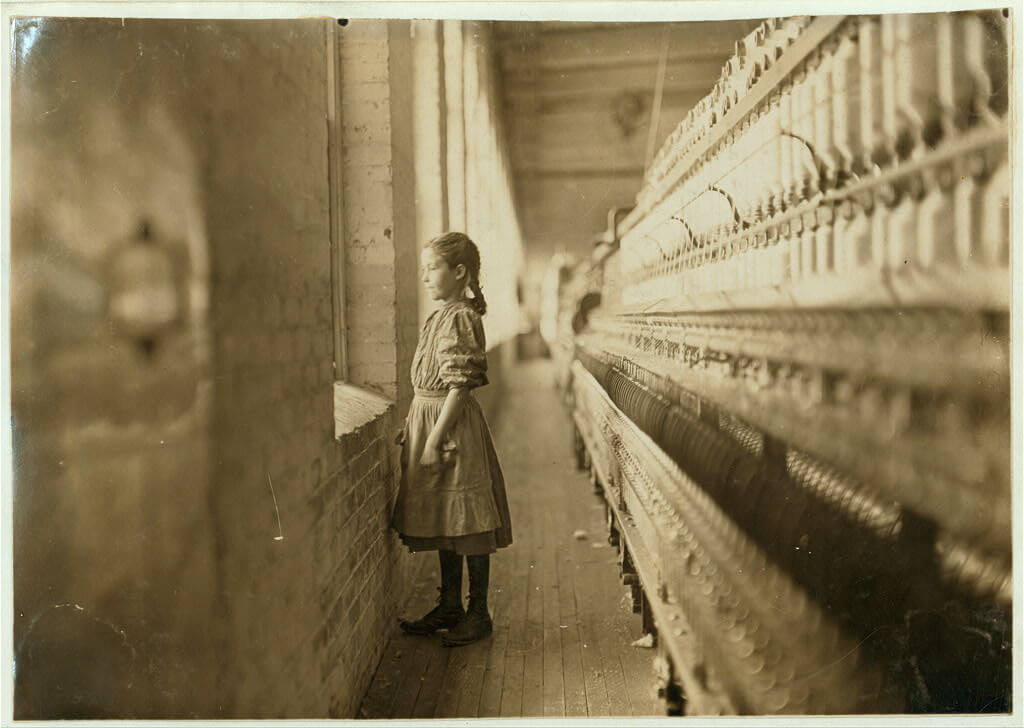 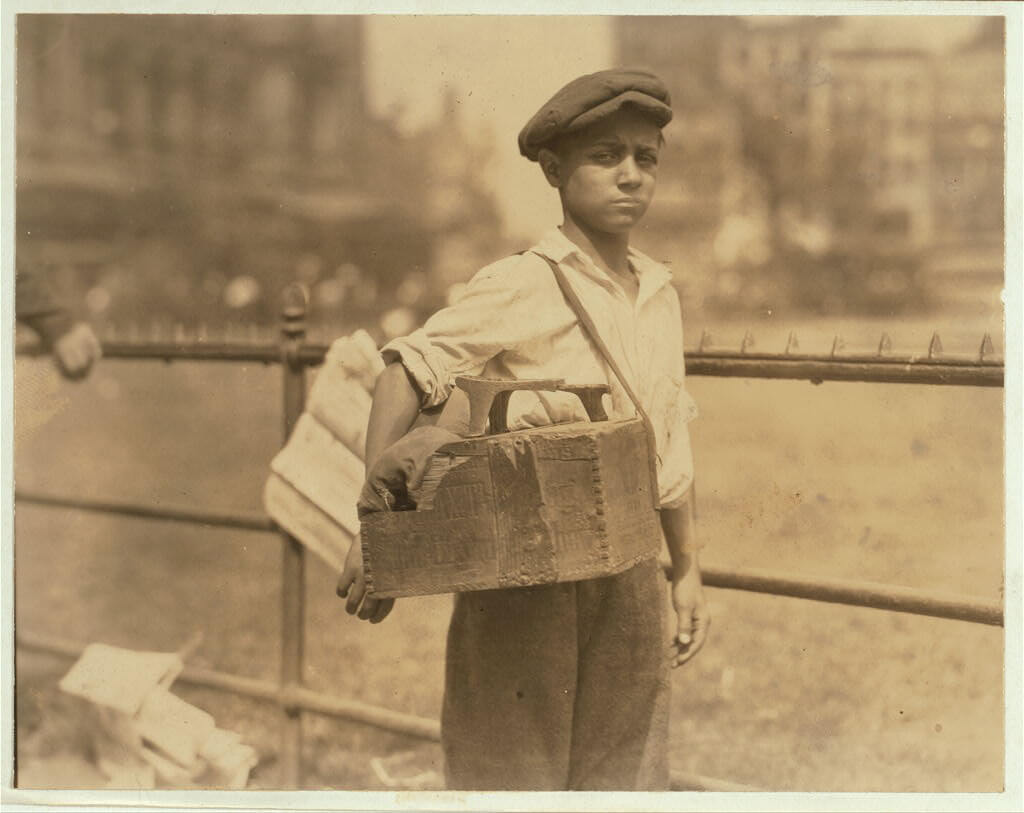 Little Fannie, 7 years old, 48 inches high, helps sister in Elk Mills. Her sister (in photo) said, “Yes, she he’ps me right smart. Not all day but all she can. Yes, she started with me at six this mornin’.” These two belong to a family of 19 children. Location: Fayetteville, Tennessee 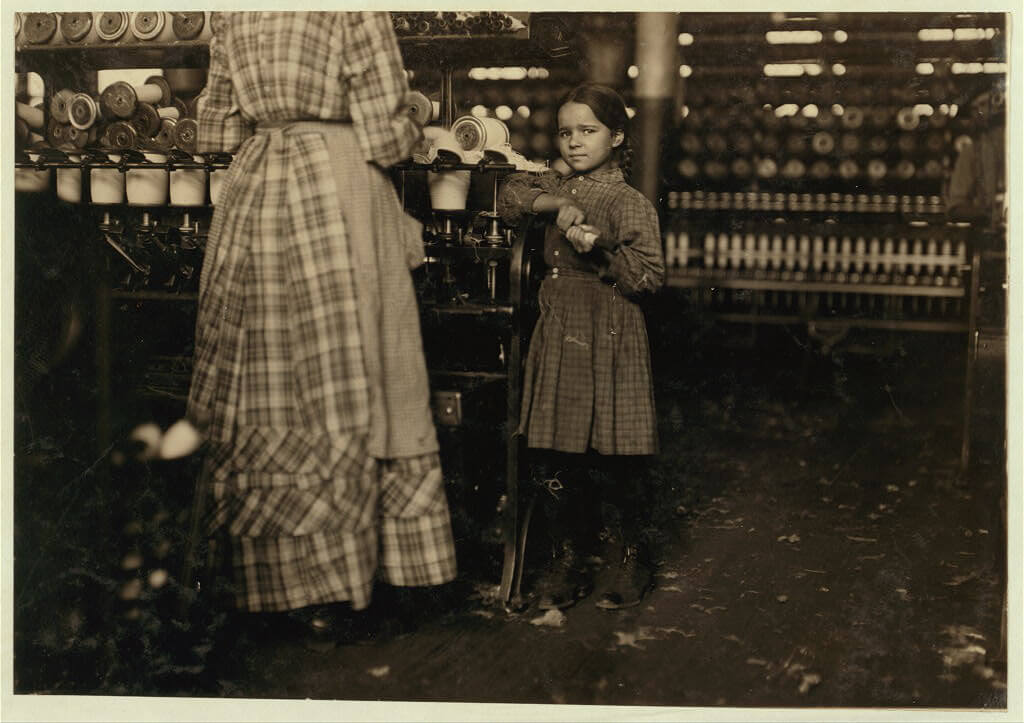 Born in Wisconsin in 1874, Hine initially worked in blue-collar jobs after his father died in 1892. His first job was in a factory, working 13 hours a day, 6 days a week, and his following jobs were similarly difficult. Through these experiences, he saw firsthand how young workers were taken advantage of.

Wanting to escape his situation, he began saving for a college education. In 1901, after studying sociology, he was hired to teach at the Ethical Culture School in New York. In addition to teaching, he was asked to be the school’s photographer. Though he mainly photographed life at the school, he soon realized how powerful photography was. He saw its potential for revealing the truth. 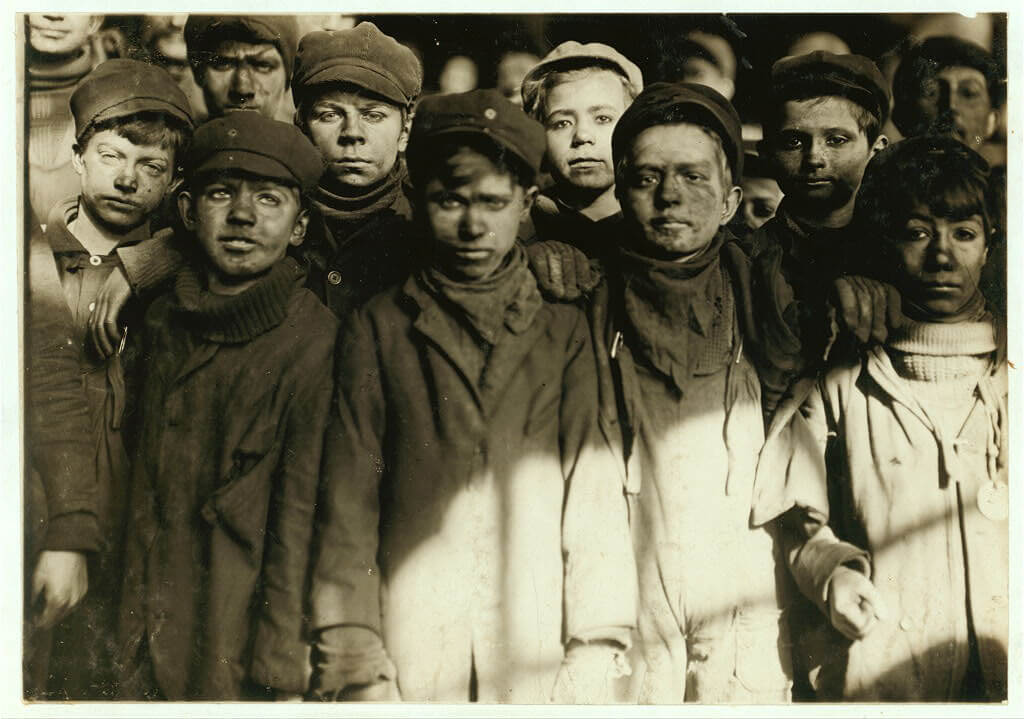 Vance, a Trapper Boy, 15 years old. Has trapped for several years in a coal mine. $.75 a day for 10 hours work. All he does is to open and shut this door: most of the time he sits here idle, waiting for the cars to come. On account of the intense darkness in the mine, the hieroglyphics on the door were not visible until plate was developed. Location: West Virginia. 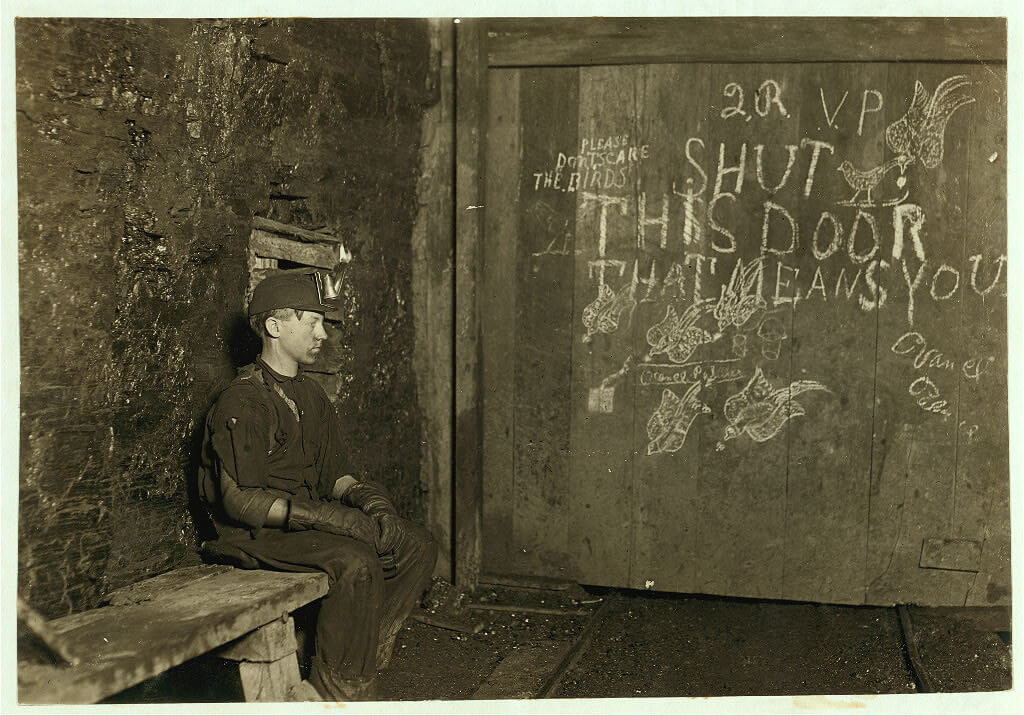 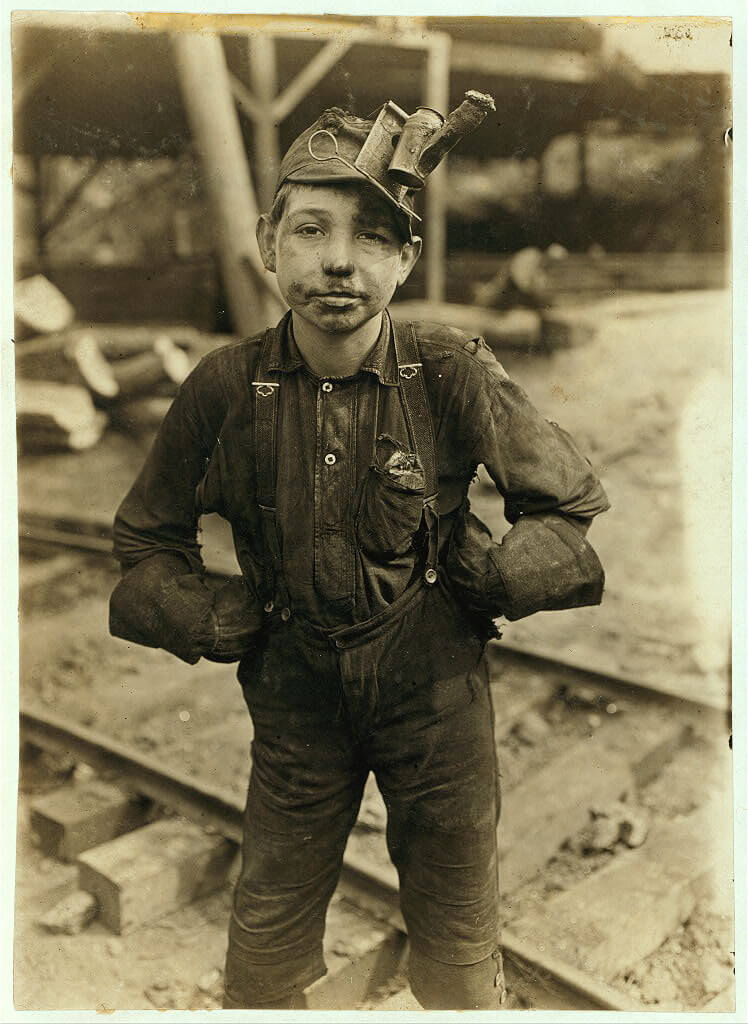 At first, he imagined using this power mainly within education. He started encouraging his students to learn photography and document events. He brought them to Ellis Island, where thousands of immigrants arrived each day, and began photographing these immigrants during their arrival.

Eventually, he realized how photography could not only improve education, but also lead to big social changes. In 1908, after photographing the living conditions of steel workers in Pittsburg, he was hired by the National Child Labor Committee to document and help end child labor in the US. Dedicating himself to this cause, he left his teaching job to work full-time as a photographer. 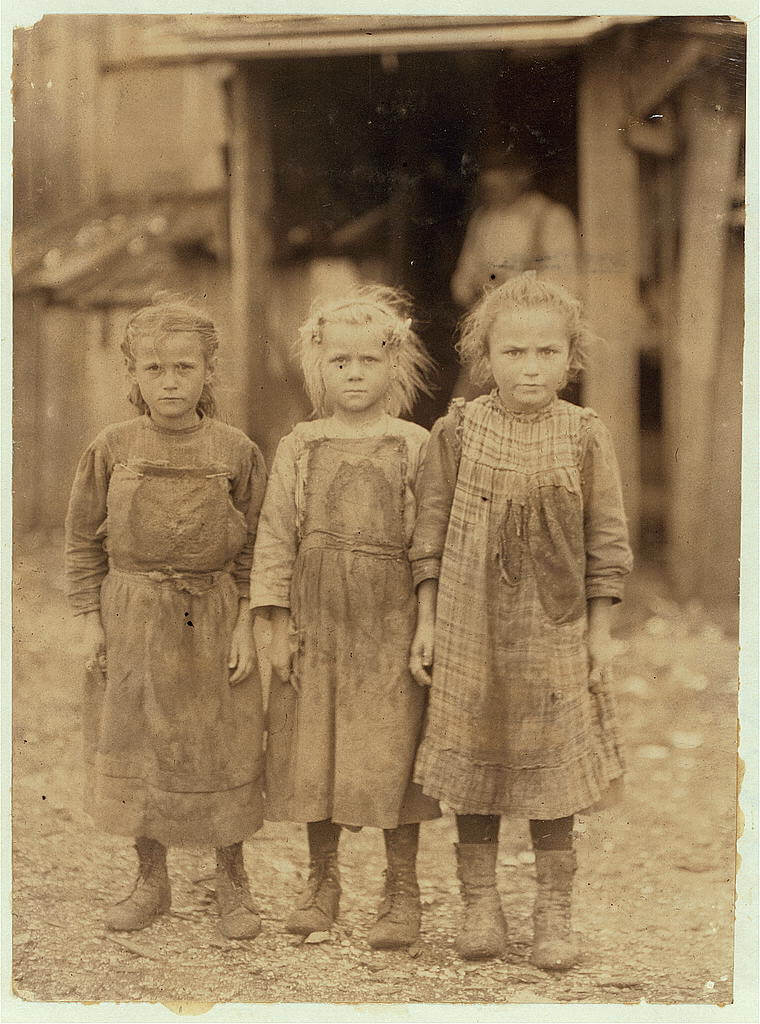 Little Nettie, a regular oyster-shucker in Alabama Canning Co. She speaks no English. Note the condition of her shoes, caused by standing on the rough shells so much, a common sight. Location: Bayou La Batre, Alabama 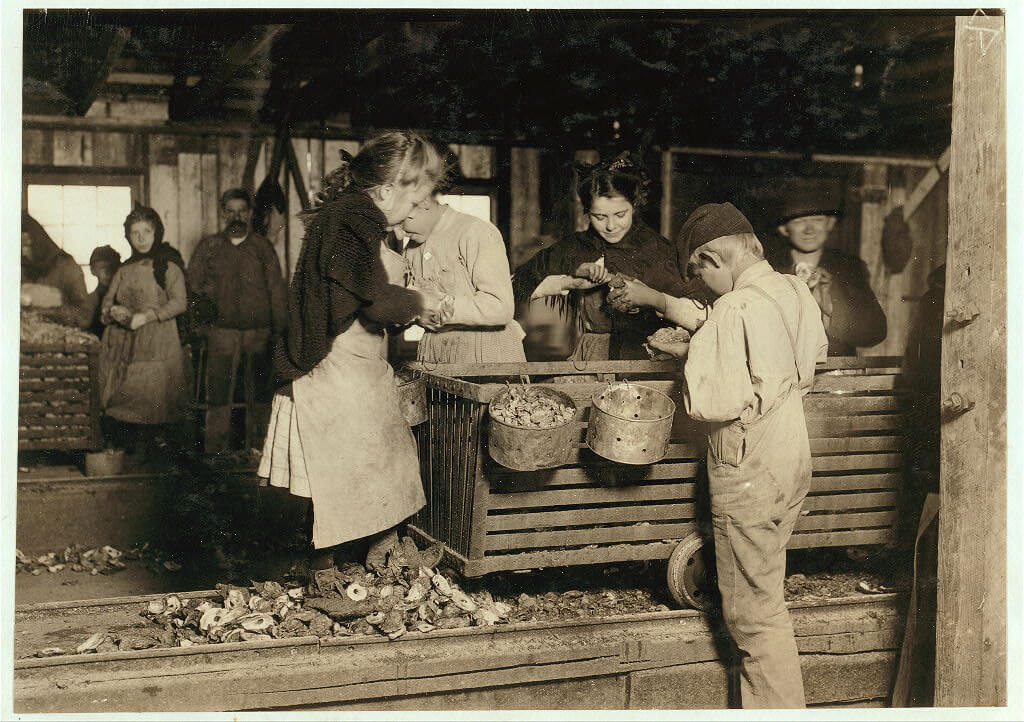 Nearly 9 A.M. Girl (about 8 years old) carrying sack of hose supporters home, a long distance and she had to run to get home in time for school. Uphill and tiring work, resting frequently. Location: Worcester, Massachusetts 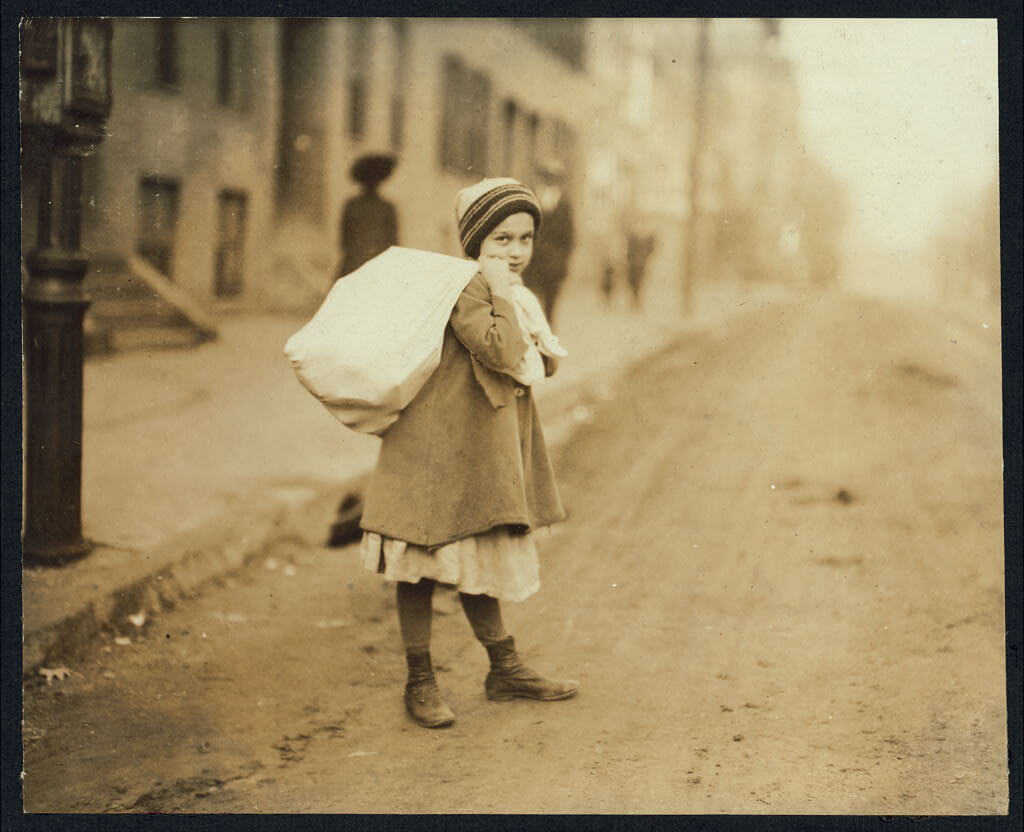 For a decade, Hine traveled around the eastern United States, from the Northeast to the Deep South, visiting mills, mines, canneries, factories, and farm fields. Often, he had to use a disguise in order to visit these places. For instance, he would introduce himself as a postcard salesman, fire inspector, or industrial photographer.

This disguise was necessary because most business owners were adamantly against child labor laws. They wanted to hide the reality of child labor from the public because children were cheaper to hire than adults. They helped to keep profits high and prices low.

If his true identity was discovered, Hine faced anger and threats of violence, including death threats. Constantly aware of this risk, he took pictures and gathered information quickly. He noted details like a child’s age and job, but was rarely able to have long conversations with the children. 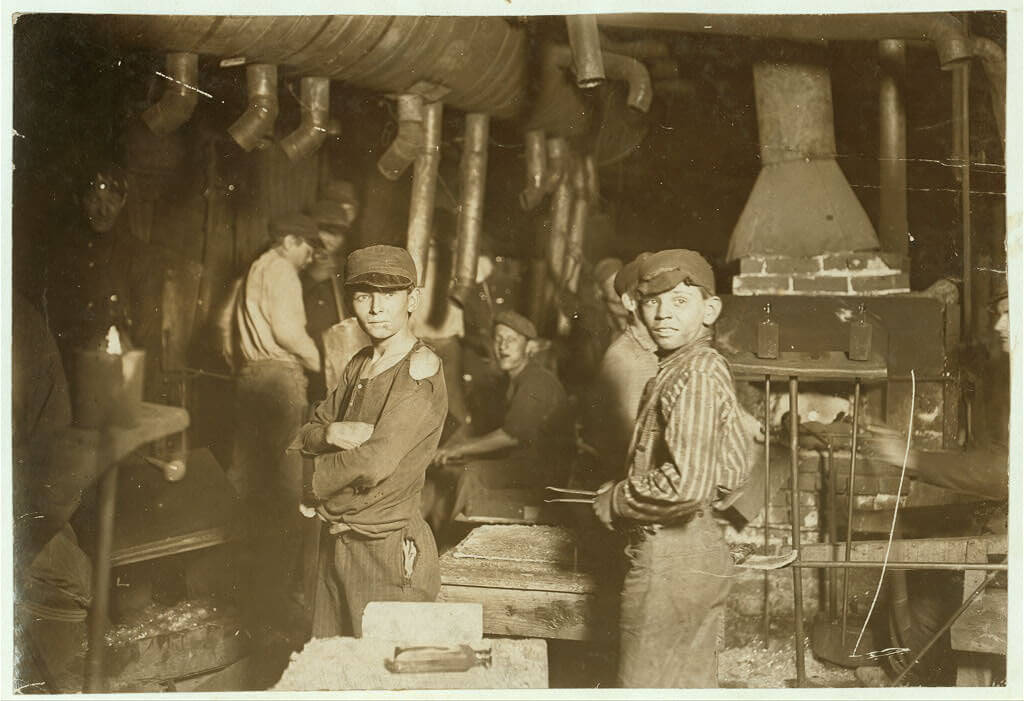 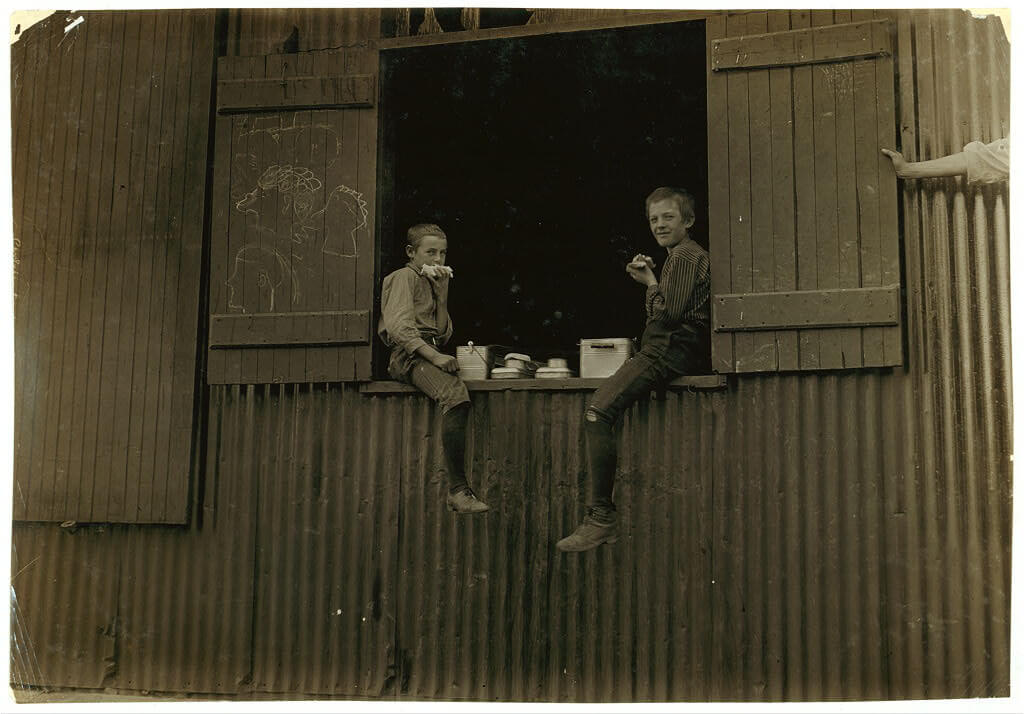 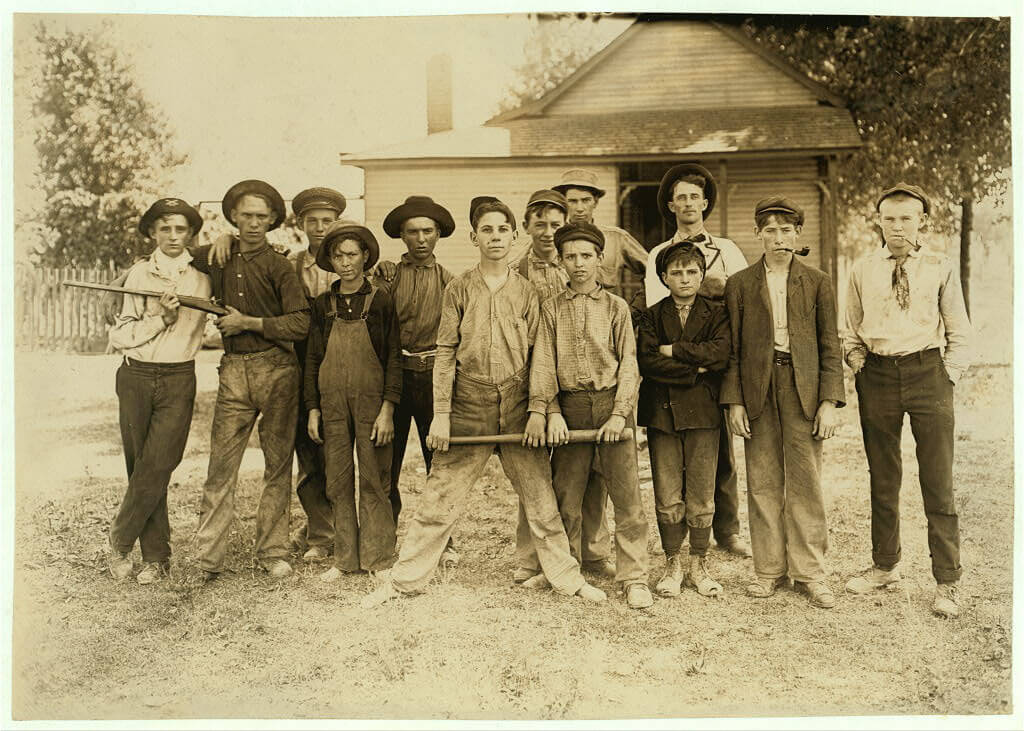 Sometimes, when he wasn’t allowed access to a workplace, he would stay outside and look for other opportunities for photos. For instance, he might photograph people as they were leaving or during their lunch breaks. And for some jobs, like newsies or dinner-toters, he could photograph the children on the job more easily.

During these undercover photo shoots, Hine’s main goal was to capture the truth. If the children were proud of their work and happy with their conditions, he captured that, too. He didn’t want his viewers to experience horror, per se; above all, he valued the truth. He wanted honesty, not propaganda.

He also told his subjects to look straight into the camera. This eye contact showed their emotions and humanity, connecting them with viewers. In this way, he created photos that were sympathetic as well as truthful. 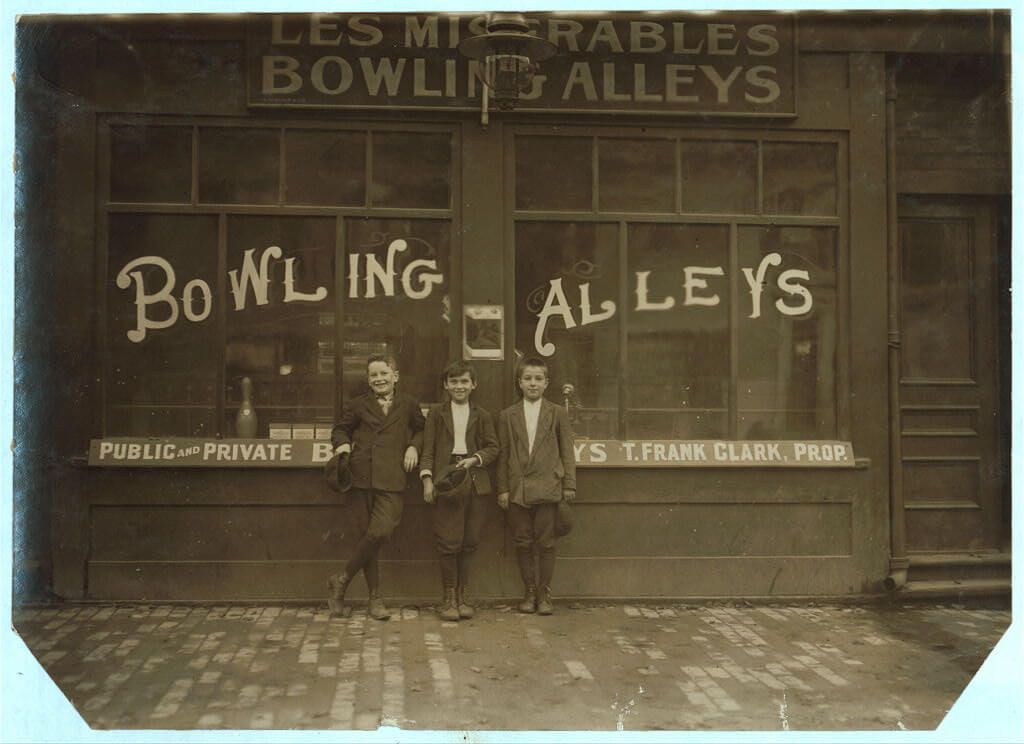 Boys picking over garbage on “the Dumps.” Location: Boston, Massachusetts 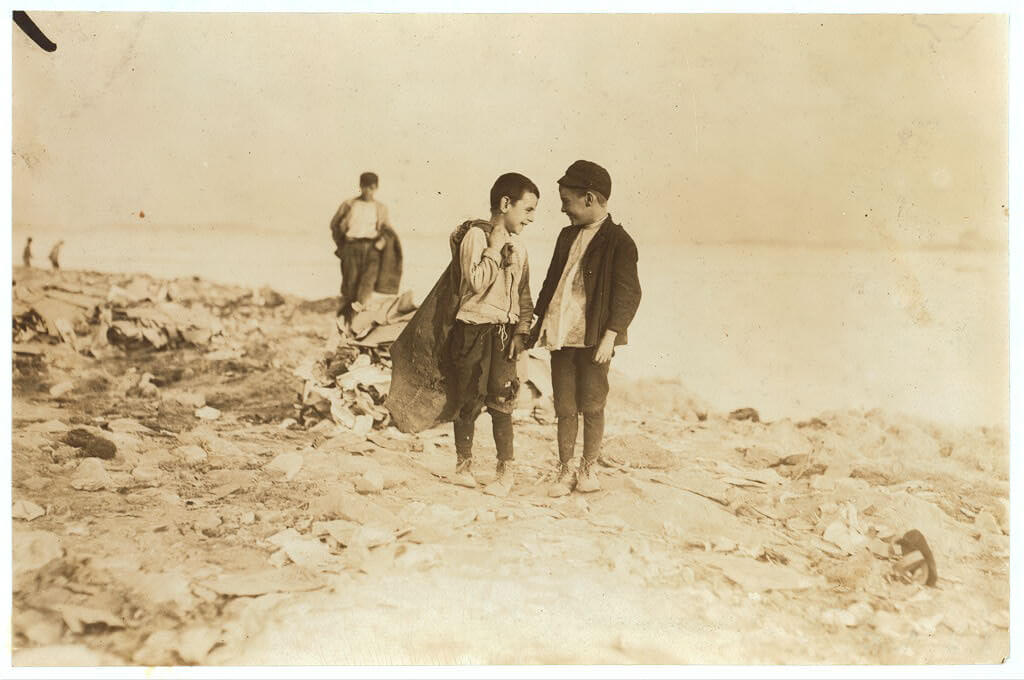 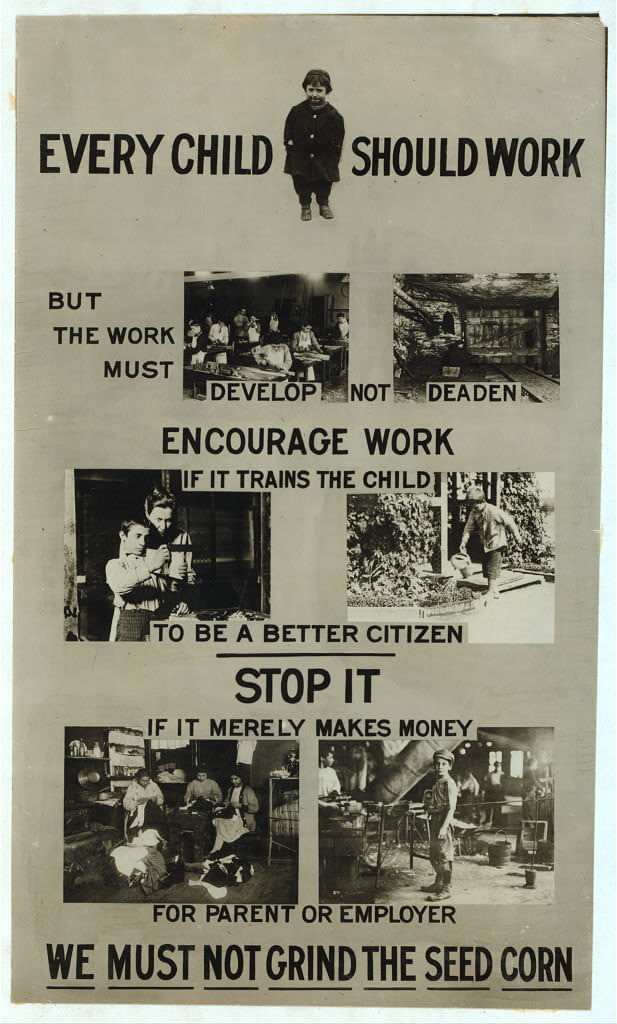 The authenticity of his photos was compelling. Through pamphlets, magazines, books, and traveling exhibitions, his images helped convince the government to pass child labor laws, as well as strictly enforce those laws.

After a decade of documenting child labor, Hine then worked for the American Red Cross during World War I, photographing relief missions to France and the Balkans. After that, he worked for various organizations, agencies, and non-profits. For example, he photographed the construction of the Empire State Building, a dangerous commission that involved hanging in a basket 305 meters (1,000 feet) above the ground.

However, despite all these projects and achievements, Hine was never a famous photographer. During the depression, he actually struggled to find work and survive financially. Eventually, he lost his house and needed to apply for welfare. He died at age 66, virtually unknown. 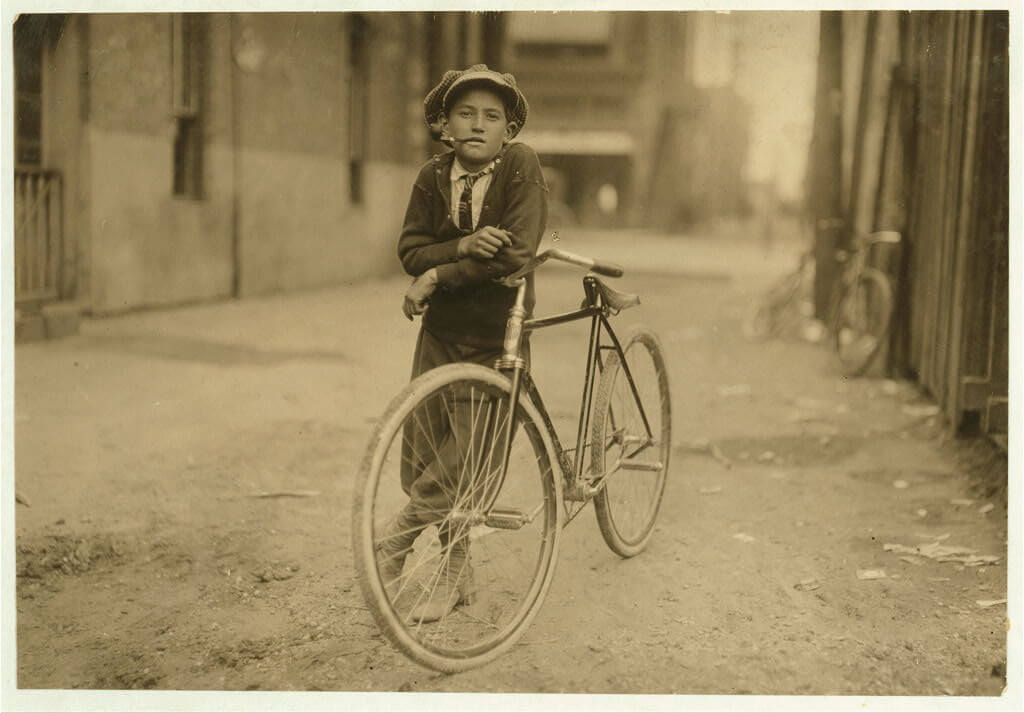 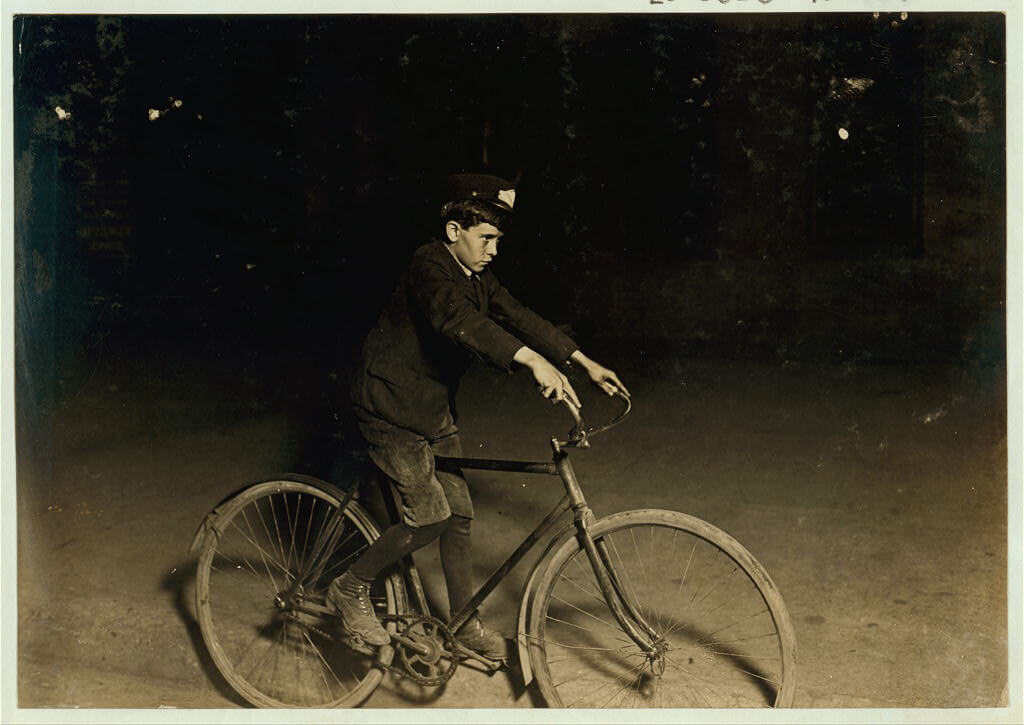 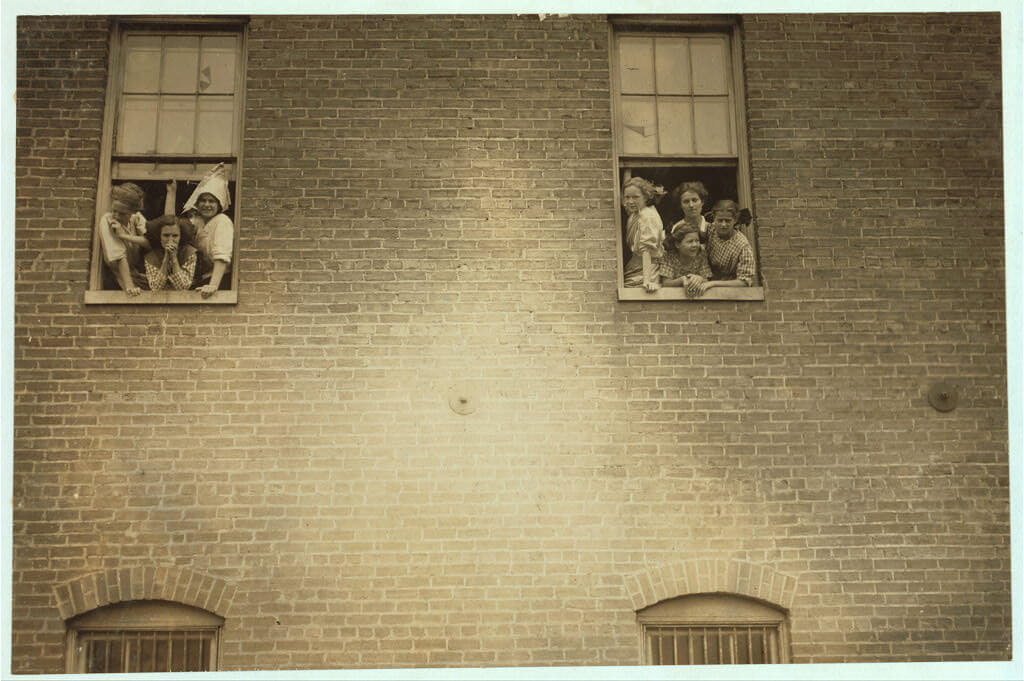 Though his name isn’t widely known, Hine’s images were incredibly important. They helped to transform American society, so that children are in schools instead of factories. Now, the only American industry that continues to use child labor legally is the agricultural industry, which was excluded from the 1938 Fair Labor Standards Act.

While this exemption allows for families to work together on family farms, it also allows agricultural companies to exploit young migrant workers. According to the Department of Labor, about 500,000 children are employed as farmworkers in the US, working long hours under difficult conditions.

“Many of these children start working as young as age 8, and 72-hour work weeks (more than 10 hours per day) are not uncommon.” Their working conditions are dangerous, too. “A report by the Government Accountability Office suggests that 100,000 child farmworkers are injured on the job every year and that children account for 20 percent of farming fatalities.”

“Children are regularly exposed to pesticides, greatly increasing their risk for cancer. The Environmental Protection Agency has concluded that children are three times more susceptible to the pesticides’ carcinogenic effects than are adults. Environmental conditions (particularly extreme heat) and dangerous farming tools are even more immediate threats.”

In other words, Hine’s work remains very relevant today. Though his photos didn’t end all child labor in the United States, the powerful images he captured were still a great step towards that goal.

If his work inspires you, check out more of his photos via the Library of Congress. 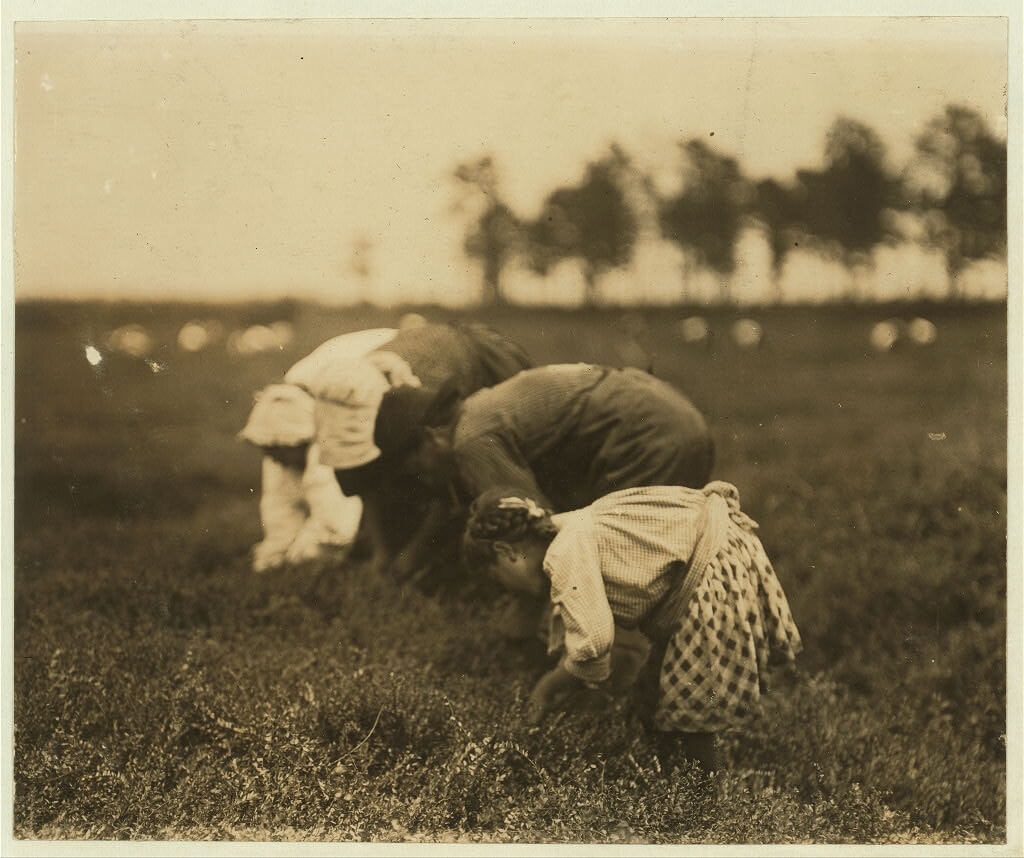 Eight-year-old, Jennie Camillo, lives in West Maniyunk, Pa. (near Philadelphia). For this summer she has picked cranberries. This summer is at Theodore Budd’s Bog at Turkeytown, near Pemberton, N.J. This is the fourth week of school in Philadelphia and these people will stay here two weeks more. Her look of distress was caused by her father’s impatience over her stopping at our photographer’s request. 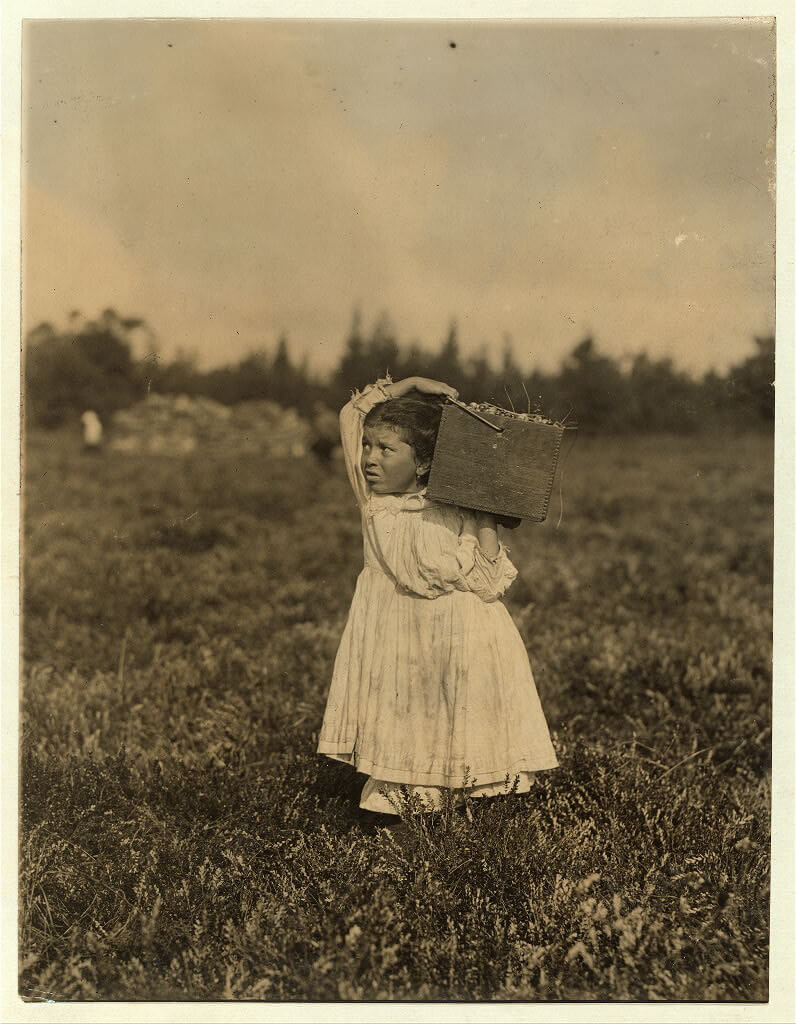 Jewel and Harold Walker, 6 and 5 years old, pick 20 to 25 pounds of cotton a day. Father said: “I promised ’em a little wagon if they’d pick steady, and now they have half a bagful in just a little while.” Location: Comanche County–[Geronimo], Oklahoma 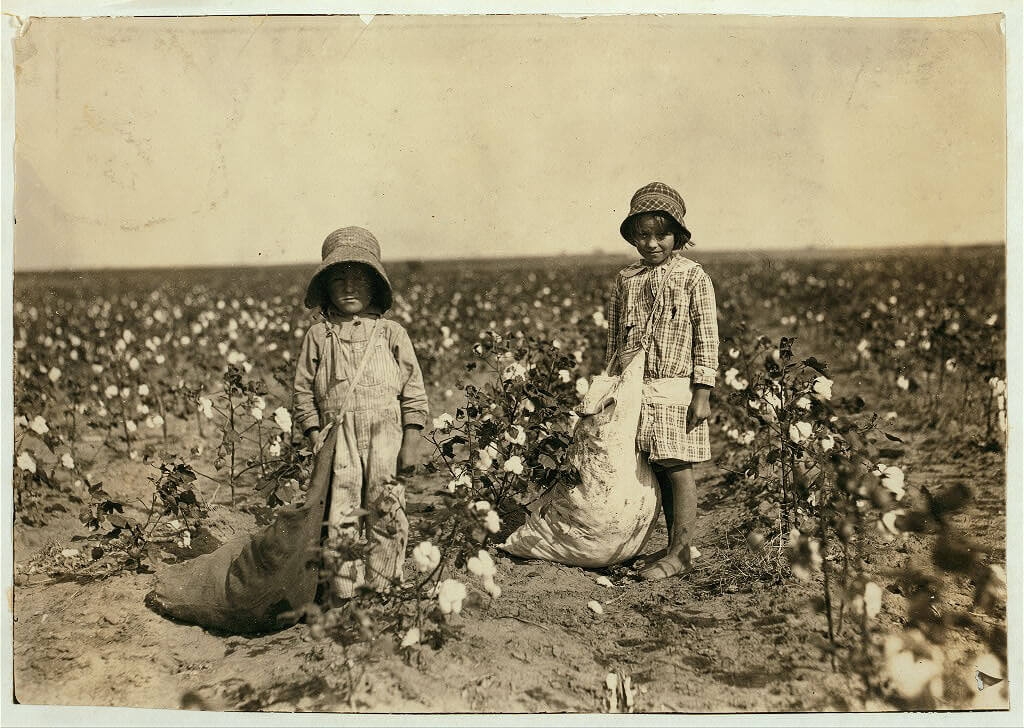 Eagle and Phoenix Mill. “Dinner-toters” waiting for the gate to open. This is carried on more in Columbus than in any other city I know, and by smaller children. Many of them are paid by the week for doing it, and carry sometimes ten or more a day. They go around in the mill, often help tend to the machines, which often run at noon, and so learn the work. A teacher told me the mothers expect the children to learn this way, long before they are of proper age. Location: Columbus, Georgia. 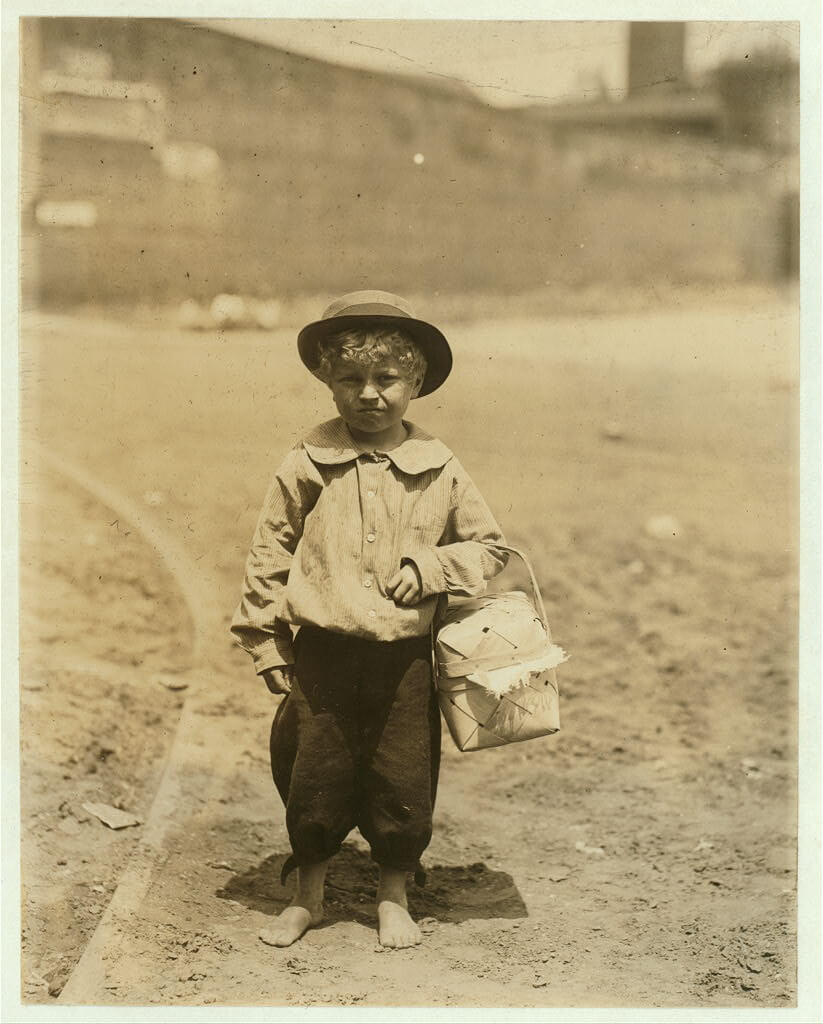 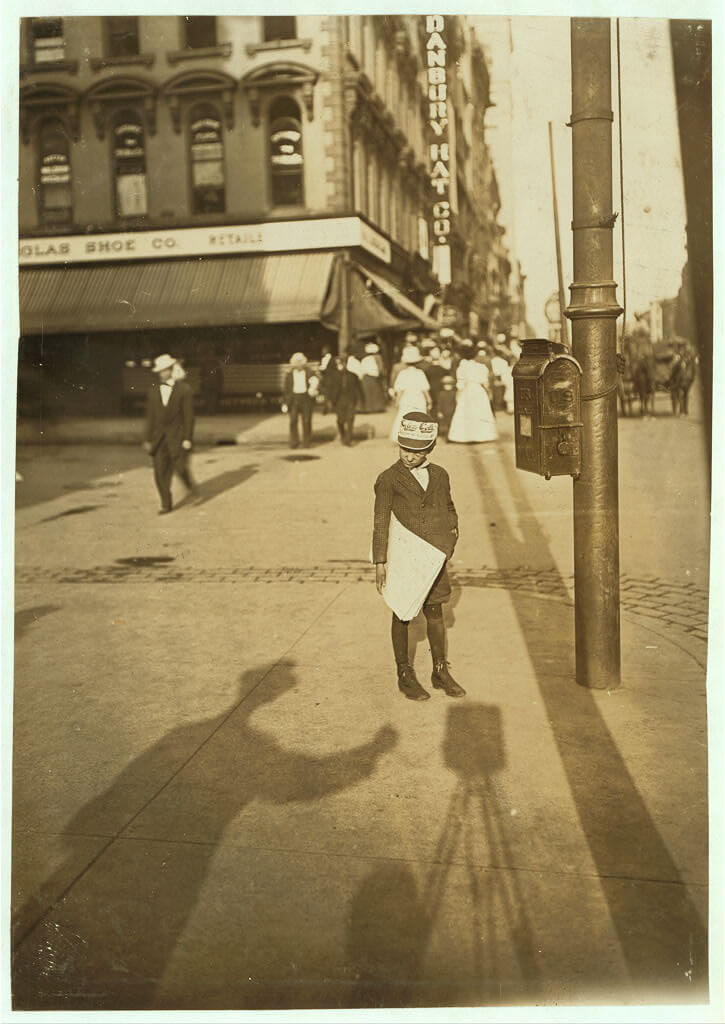 Freddie Kafer, a very immature little newsie selling Saturday Evening Posts and newspapers at the entrance to the State Capitol. He did not know his age, nor much of anything else. He was said to be 5 or 6 years old. Nearby, I found Jack who said he was 8 years old, and who was carrying a bag full of Saturday Evening Posts, which weighed nearly 1/2 of his own weight. The bag weighed 24 pounds, and he weighed only 55 pounds. He carried this bag for several blocks to the car. Said he was taking them home. Sacramento, California 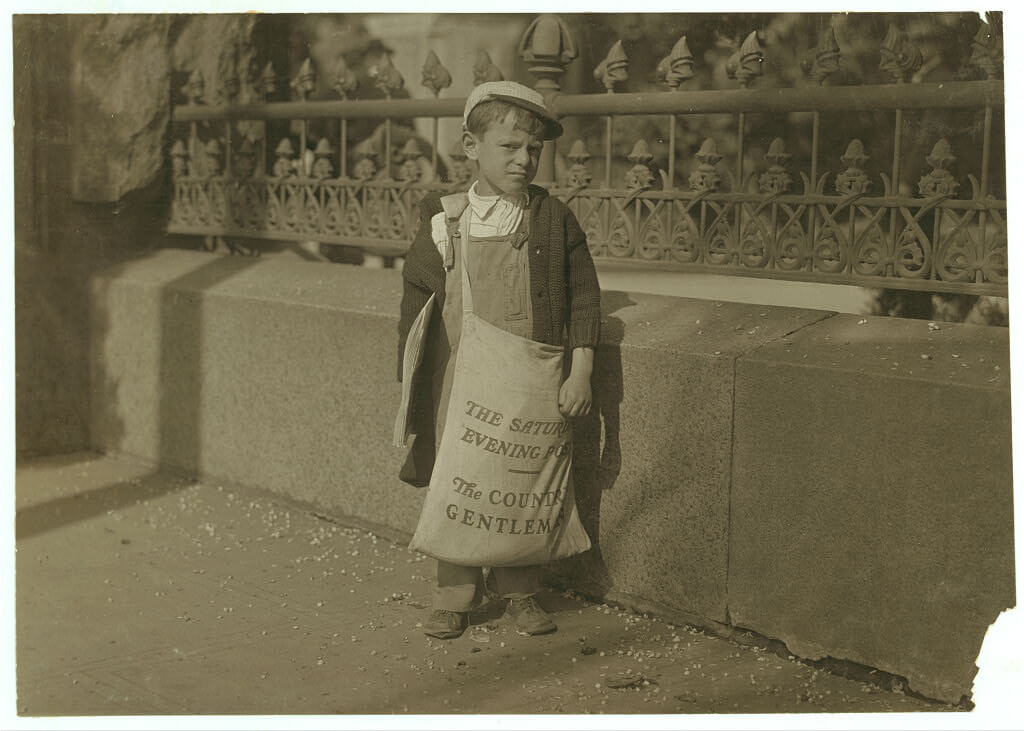 2 A.M. February 12,1908. Papers just out. Boys starting out on morning round. Ages 13 years and upward. At the side door of Journal Building near Brooklyn Bridge. New York, New York 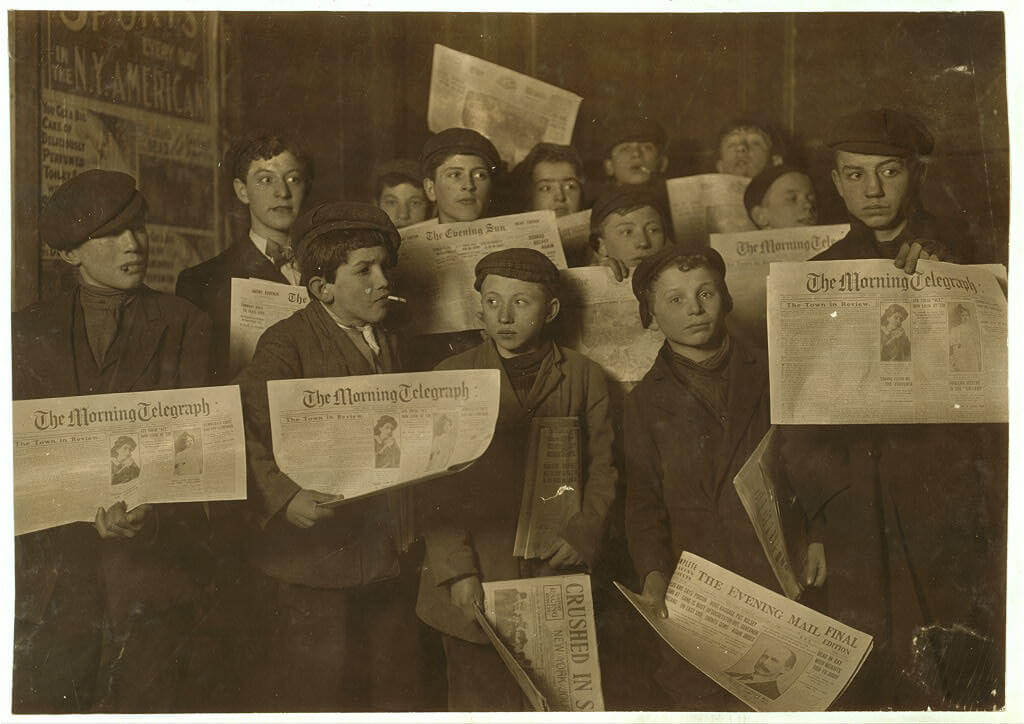 Hyman Lapcoff, 1526 Fourteenth St., N.W., Washington, D.C. A ten-year-old newsie from a good family, carrying a heavy load of newspapers quite a distance. This is a common occurrence and is bad for the little fellows. 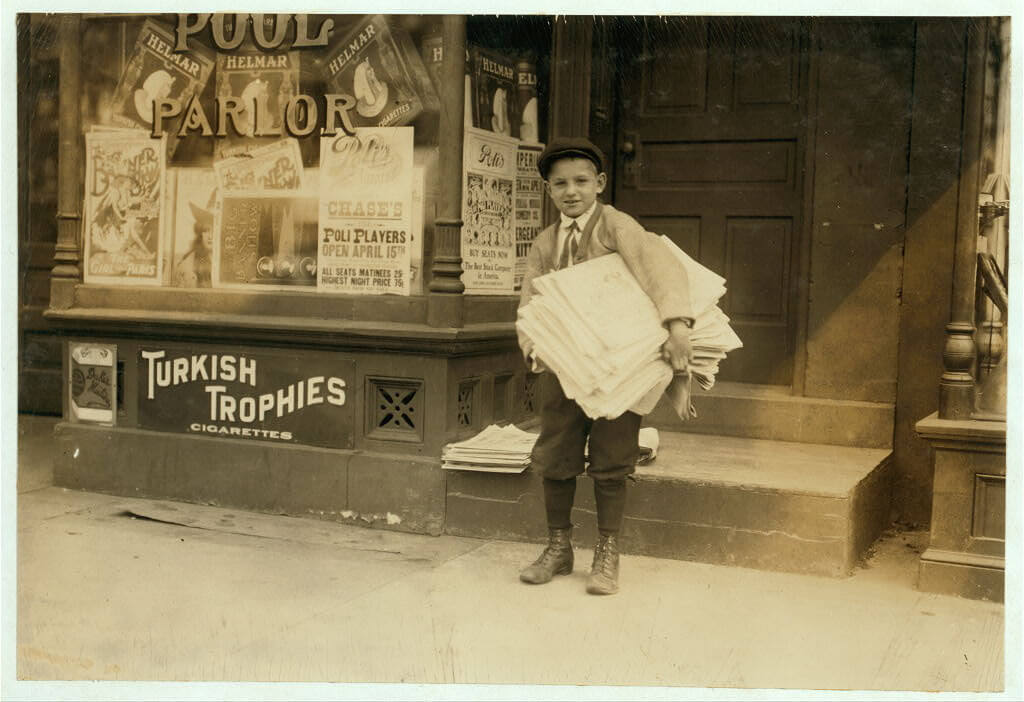 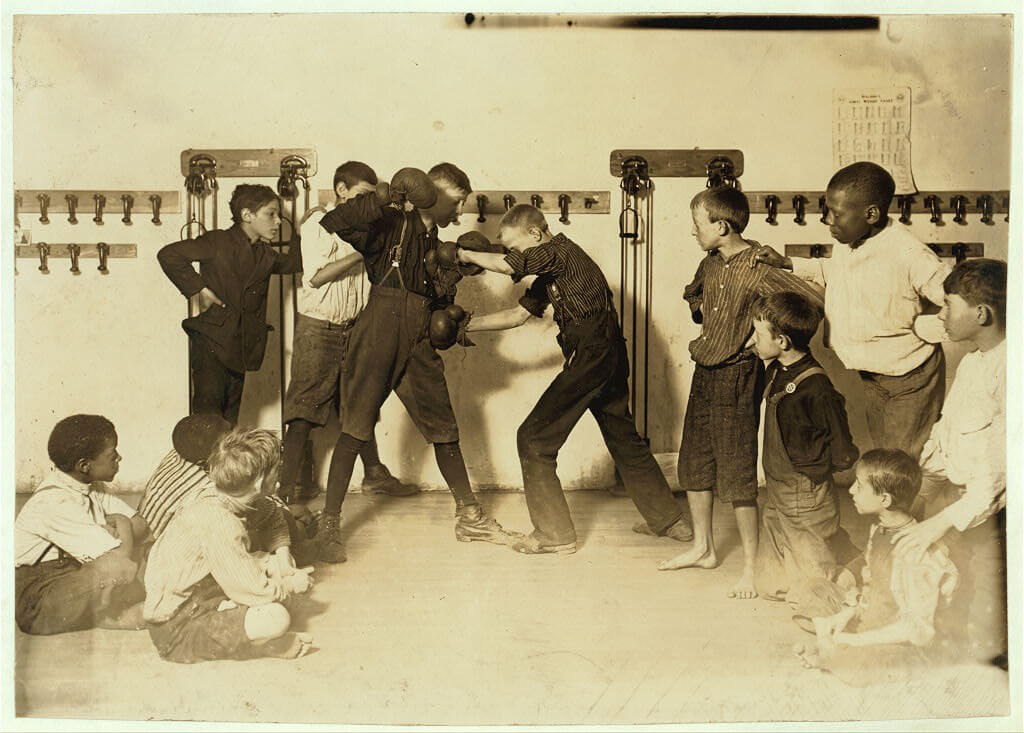