The silver bullet for taking photos with a beautiful blurred background (Bokeh) are lenses with a wide aperture. These lenses are expensive, bulky, heavy and difficult to work with. By now blurred backgrounds obtained by postprocessing software cannot come up to the bokeh produced by an optical lens and there are few attempts to find a way out. In 2016 Thilo Gockel introduced the term Defocus Stacking for a manual method where he superposed a sharp image of the motif and one image with blurred background. It was a manual method requiring an exact mask of the motif and additional manual corrections. 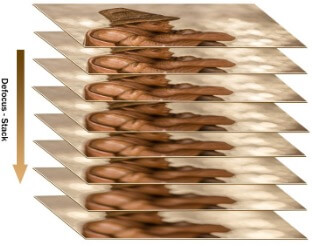 This new approach is based on an image stack consisting of a sharp picture of the motif at the top and increasingly defocused images beneath. It does not require an exact mask for the motif, so we can use automatic segmentation algorithms and there is no need for manual corrections of the result.

The new method is based on a stack of images: A sharp image of the motif constitutes the top layer and on the levels beneath we have images with increasingly defocused background. The recording workflow starts with a sharp image of the motif and for the following images the focus plane is moved towards the camera. In this way the file names generated by the camera can be used later to identify their level on the stack. The focus bracketing function implemented in some mirrorless cameras can be reversed and thus used to get a defocus stack.

How to shoot a defocus stack

The diagram below outlines the workflow of the algorithm: We have a Defocus Stack 1 with four levels: level 0 as the top level and level 3 as the lowest level.

The process outlined above yields good results if the generated initial mask approximately isolates the motif and if the defocus steps between the levels of the stack are not too large. Because we extend and blur the mask from level to level we get a smooth transition from the sharp motif to the fully blurred background of the lowest stack level.

is the newer and more powerful algorithm. It uses a concept from graph theory published by Rother, Kolmogorov and Blake in 2012. All pixels of an image are arranged in a graph, where adjacent pixels are connected by edges. Each edge is weighted by the similarity of the two pixels at its vertices. Foreground and background pixels are separated by a graph theoretical method – a so-called ‘minimal cut’. It decomposes the graph into two parts – foreground and background – by cutting its edges so that the weight sum of the cut edges is minimal.

Principle of the GrabCut segmentation

identifies blobs in the picture, i.e. connected subareas with similar attributes such as the channels of the color space or the brightness. The DefocusStacker application implements the algorithm with only one attribute and by default it selects the largest blob as background. Our implementation allows to modify the assignment of the blobs to the foreground/background.

Defocus Stacking result for a motif with distinct edges:

Sharp picture and the GrabCut mask for the motif

Stack with four images and the Defocus Stacking result

Defocus Stacking sample for a motif with complex edges:

Sharp picture and GrabCut mask for the motif

DefocusStacker is an implementation of the algorithm demonstrating the feasibility of the method. There are two versions:

The references contain download links to both implementations and their user manuals. 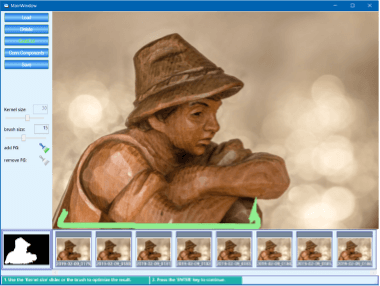 User interface of the DefocusStacker application

Limitations of the method

Of course there are situations where the Defocus Stacking process can fail. One reason could be the number of images in the stack: Five to ten images are optimal in most situations. Too many images as well as too few images are counterproductive. Problems can also arise if the attributes of the motif and the attributes of the background are very similar so that the segmentation cannot separate them.