Children’s portraits by Kim Anderson are famous for their sweet innocence and nostalgia. They capture moments of childhood in black and white with details hand-painted in color. This mixture of young and old, little children with old-fashioned photography, has made Kim Anderson a well-known name.

Kim Anderson isn’t the name of a photographer, though. It’s a pseudonym that became a powerful brand, created by German photographer Bertram Bahner.

Born in 1959, Bahner was a successful photographer long before he created the widely-published Kim Anderson images. His career in photography began in his early twenties with fashion and portraiture, along with projects for advertising agencies.

He worked this way for many years, slowly growing his experience and skills. He was successful and even started working for Verkerke Reprodukties (or Verkerke Publishing of Holland), a massive Dutch printing company that specialized in posters, greeting cards, and art prints.

At first, his photos for Verkerke were provocative black-and-white portraits of men and women. But then, a momentous event changed his life: he became a father.

His daughter, Nicola, became his new favorite model. He was enchanted by her innocence and sense of imagination. When she was 3 years old, he was inspired to create a series of black-and-white photos that captured the way she and her friends played together. His wife, Monika, helped by selecting props and outfits for the children.

With these props in place, Bahner stepped back and let the children play. Instead of interfering with his own ideas, he waited for a spontaneous moment when “the emotion is perfect.” By being patient, he was able to capture the candid, heart-warming images that are now so famous. He then hand-painted key details, like the clothing and flowers, to give the photos more life and vibrancy.

The photo shoots were simple, but they transformed his career. At that point, in 1992, Verkerke had just been sold to Hallmark Cards, the largest producer of greeting cards in the United States. Hallmark printed Bahner’s photos of Nikola and her friends under the name “Kim Anderson,” and they were a hit. 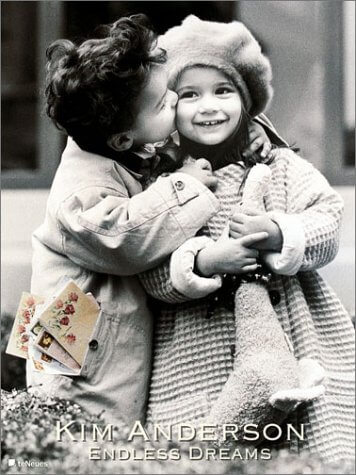 Prompted by this success, Bahner created more photos using the same approach. Monika became his photo stylist, choosing outfits and props for every shoot. His second child, Manuel, later joined the photo shoots as well, so the entire family was involved.

Soon, Kim Anderson cards and posters were everywhere. Bahner had suddenly become one of the most popular photographers in the world, albeit under a different name.

In 1995, he and his family moved from their German hometown, Bonn, to a secluded mountain community in Switzerland called Zug. This town was a lovely place to settle with his family and establish his own company, NBM Bahner Studios AG.

He used NBM Bahner Studios AG mainly to license the Kim Anderson trademark, which had grown to include more than just photos. While he continued to create hand-colored children’s portraits, he now licensed everything from figurines to jigsaw puzzles. All were enthusiastically received by Kim Anderson fans, and the company thrived.

However, his children didn’t remain his models for long. Like all children, they grew up. There were still many other children to photograph, but the photo shoots were no longer an activity for the whole family.

In some ways, this transition away from his own children made his photos more interesting. The models were more varied in personality, appearance, and nationality. But the inspiration had changed. The original motivation—-a father’s desire to capture his young daughter at play—-had become a professional one.

While Kim Anderson continues to have many fans, the “Golden Years” seem to have passed. The fading of the brand’s popularity isn’t only due to the aging of his children, though. Digital cameras and photo editing software, like Adobe Photoshop, made Bahner’s signature style more common.

Now, any professional or amateur photographer can easily create black-and-white images with color accents. Careful hand-painting isn’t necessary. All you need is a good digital photo and some knowledge of photo editing.

Nevertheless, not all photographers can imitate Bahner’s skillful way of capturing candid moments with children. It’s an art that requires limitless patience and years of practice. Though his photos may seem simple, they’re the result of hard-won experience and dedication.

Want to learn more about Kim Anderson’s photography? Check out The Art of Kim Anderson, a coffee table book that includes 250 images spanning 10 years of his work. Or, for a smaller book, there’s also Endless Dreams, which has over 100 images with accompanying descriptions in both German and English. Visit the Kim Anderson author page on Amazon to view all of his books available there.