You are here: Home / Locations / 30 Beautiful Pictures of the Lofoten Islands, Norway

Lofoten is an archipelago in Norway known for its untouched beauty and mild climate. Though it lies within the arctic circle, its average temperature only drops below freezing for a few months each year, and the summer can be quite warm. In fact, Lofoten even has a great place for surfing!

For photographers especially, the Lofoten islands are an ideal place to visit. The archipelago offers plenty of opportunities to get awesome shots. It seems like no matter where you look, there’s something incredible to capture.

Better yet, the best photography sights are all close to each other. Since Lofoten covers a relatively small area, you can easily take day trips from any location. This way, you can spend less time driving, and more time taking pictures.

Of course, Lofoten might not be every photographer’s dream destination. If you love big cities and urban architecture, you might be happier elsewhere. But if you’re into beaches, mountains, fishing villages, and arctic sights like the Northern Lights or Midnight Sun, put Lofoten on your bucket list!

To give you an idea of Lofoten’s beauty, here are 30 gorgeous photos taken around the Lofoten islands.

Lofoten has an impressive number of beaches worth visiting for photographers. You won’t get the same type of shot at every beach, either. Each one has its unique appeal. For example, you can photograph waves and surfers at Unstad beach, focus on the rocky shoreline at Uttakleiv beach, and then capture the white sand and blue water at Haukland beach.

You can drive to the majority of the beaches in Lofoten, but a handful can only be reached by hiking. These beaches are ideal if you want more seclusion and wild, rugged beauty. 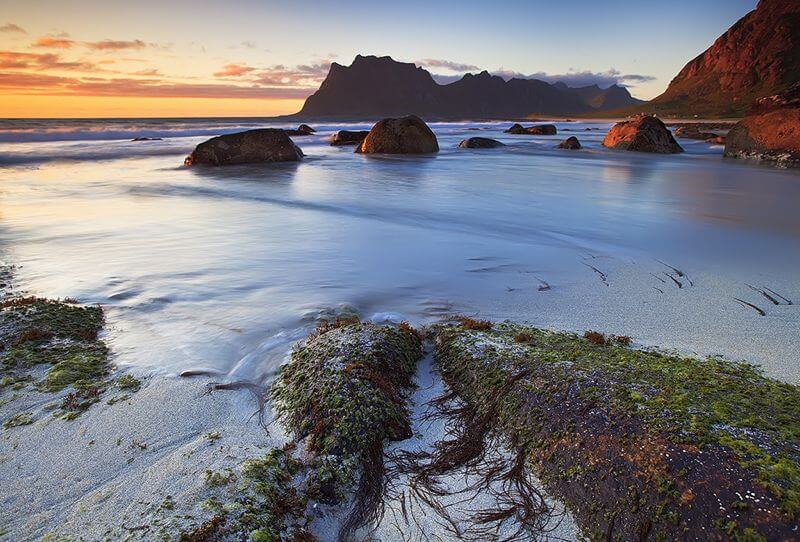 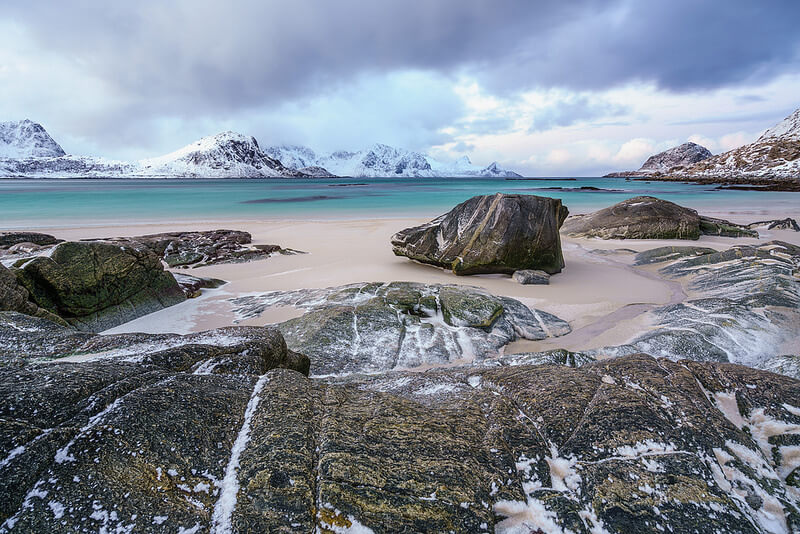 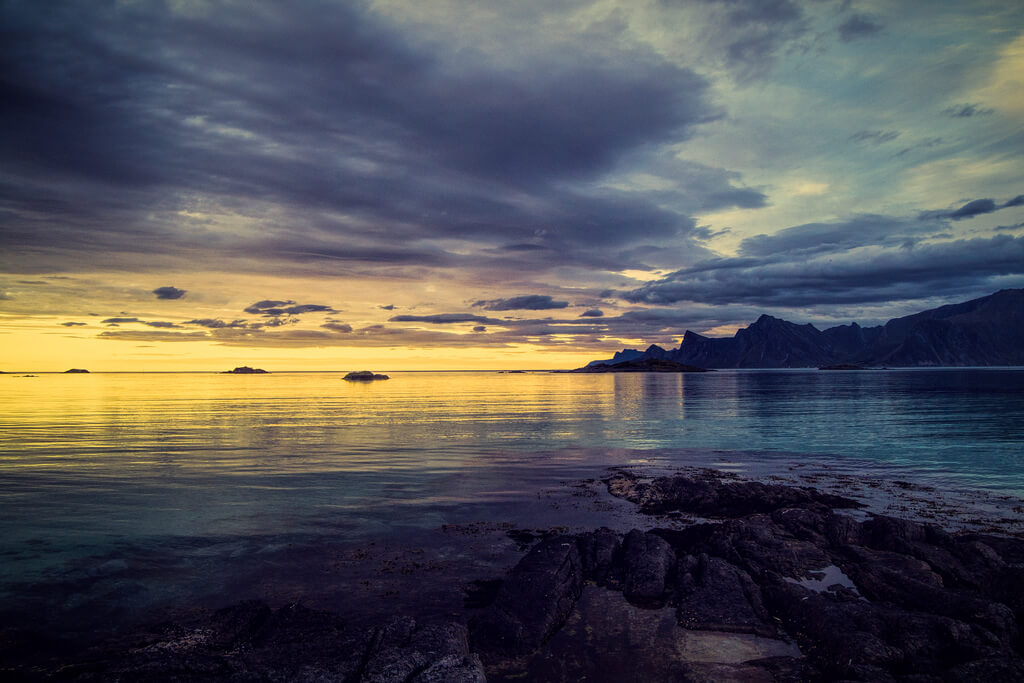 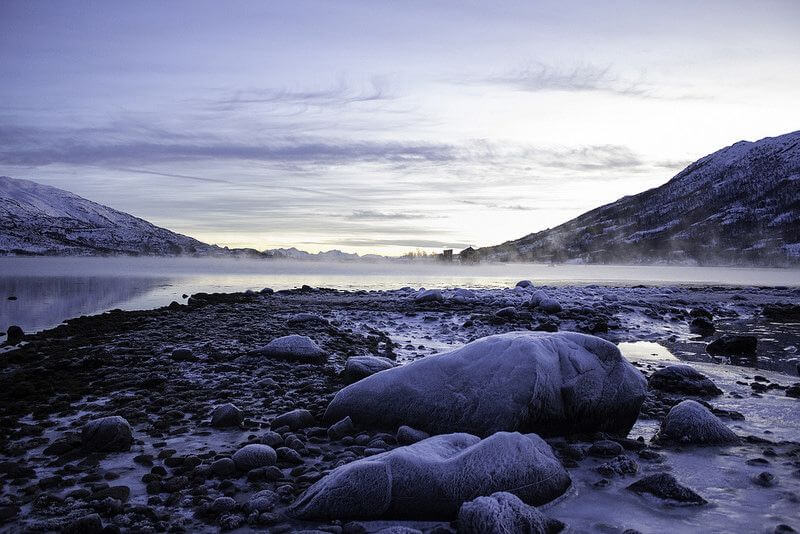 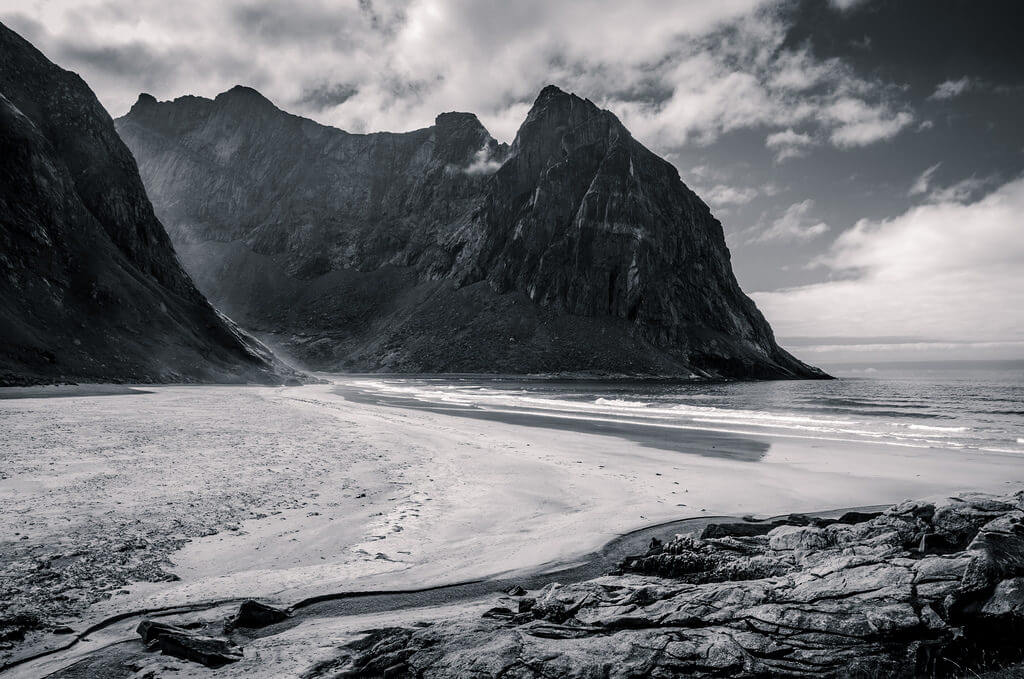 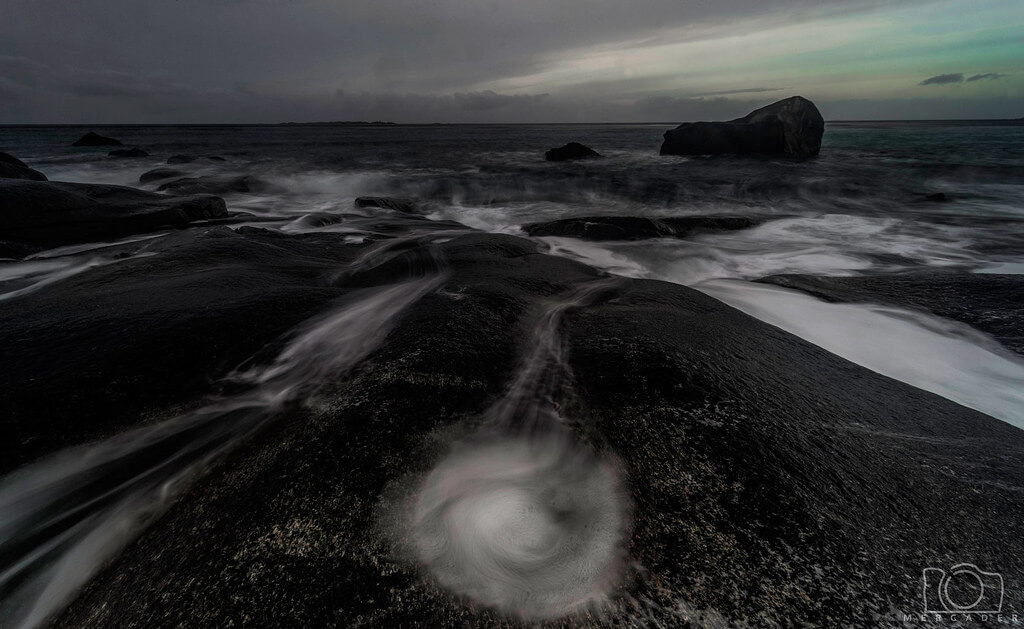 Lofoten’s jagged mountains seem to rise straight out of the ocean. They’re arctic mountains, too, so they’re covered in tundra–green in the summer, white in the winter. You basically get the feel of Alpine mountains with glaciers and sharp ridges, only at a much lower altitude. The mountains are less than 1,200 meters high.

Best of all, Lofoten has 24 hours of daylight during the summer, so you can get awesome mountaintop views at all hours. You don’t have to go by yourself, either. There are photo tours that specialize in photographing mountain views at midnight, when sunset blends into sunrise. 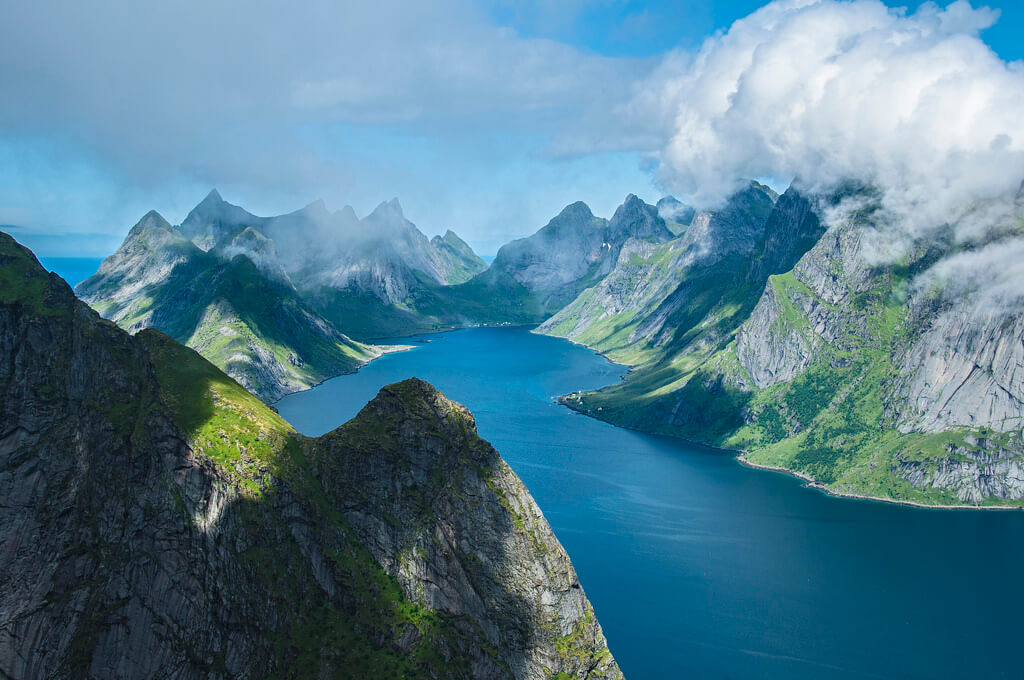 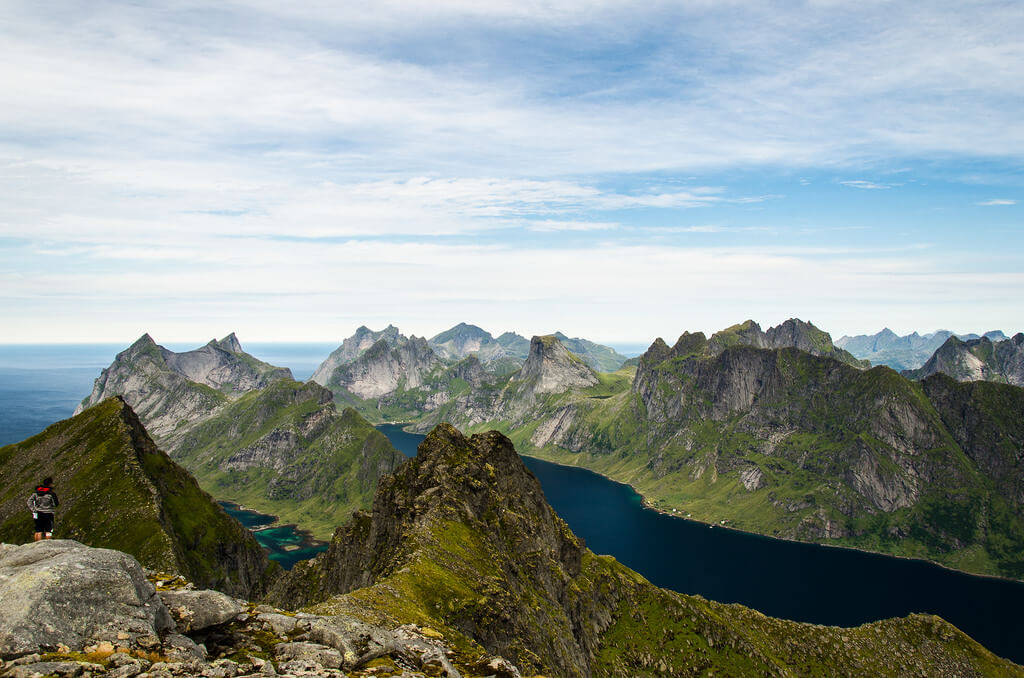 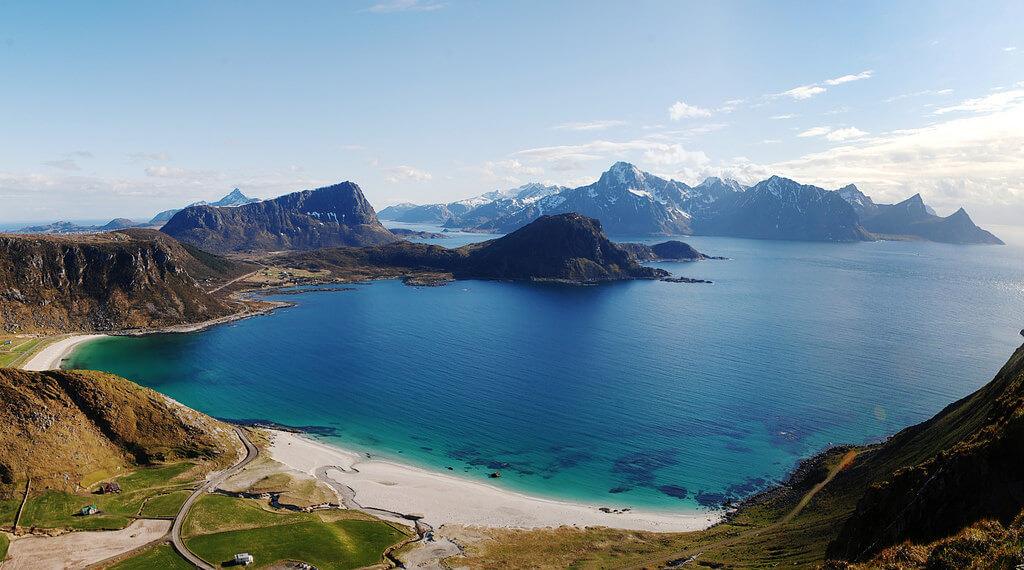 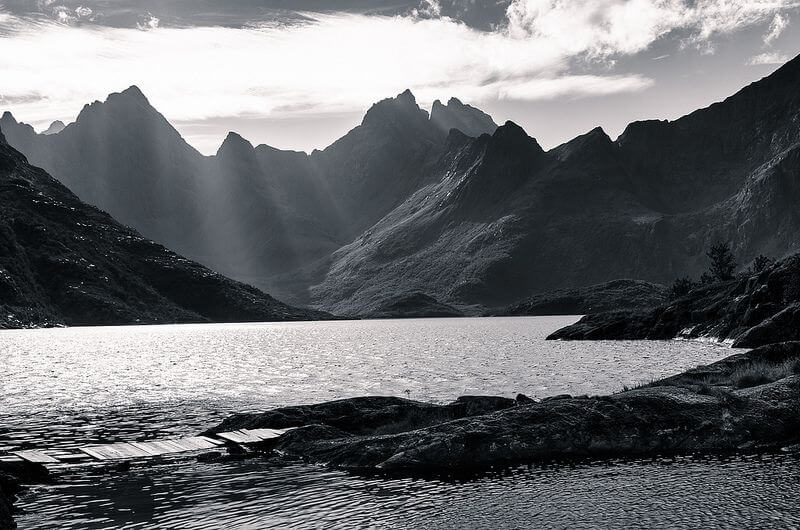 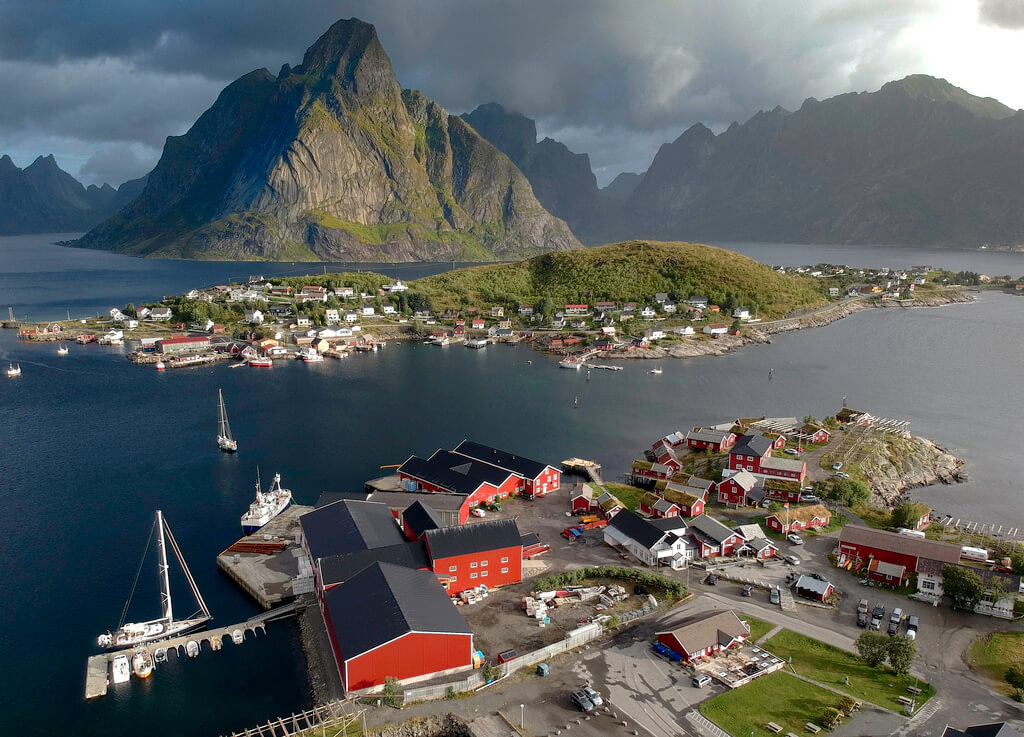 Cod fishing has been a big part of Lofoten’s economy for centuries. In other words, while visiting Lofoten, you’ll have many opportunities to both eat delicious seafood and photograph quaint fishing towns.

One of the most beautiful towns is Reine, which has just over 300 inhabitants. Despite its small population, it’s been a commercial center for more than 250 years. It receives thousands of visitors every year due to its amazing beauty. 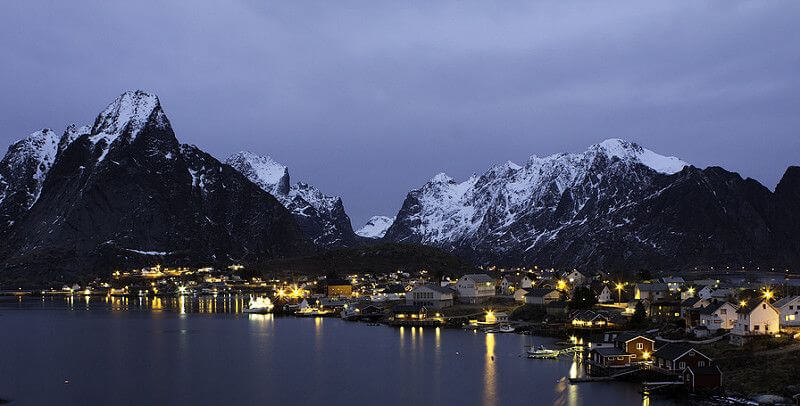 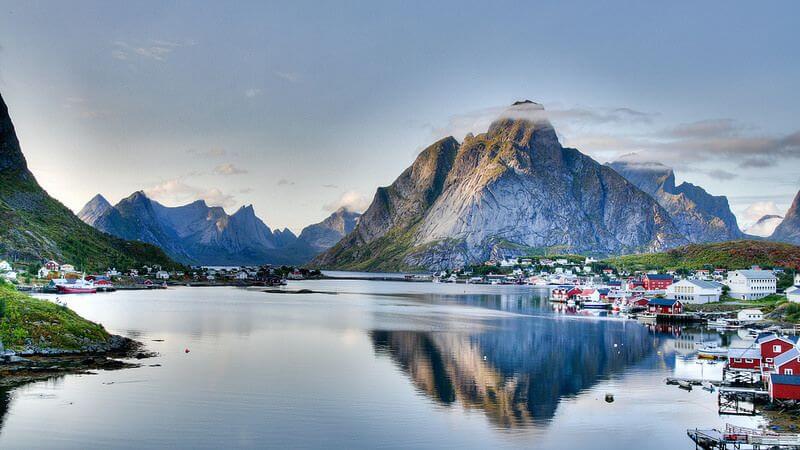 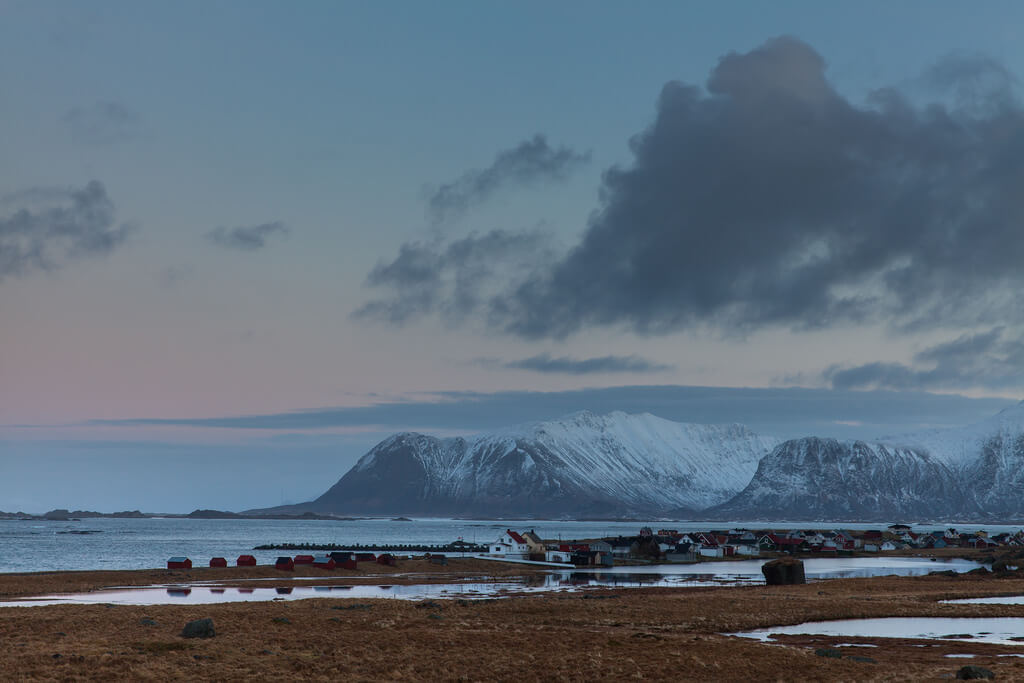 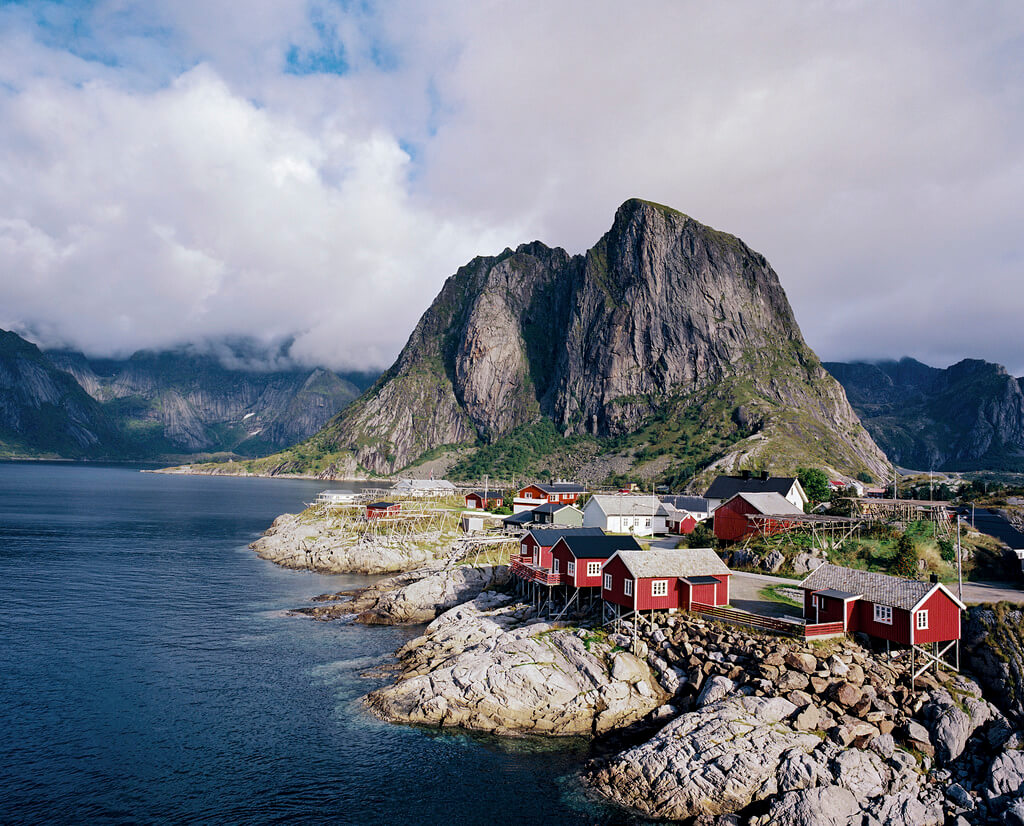 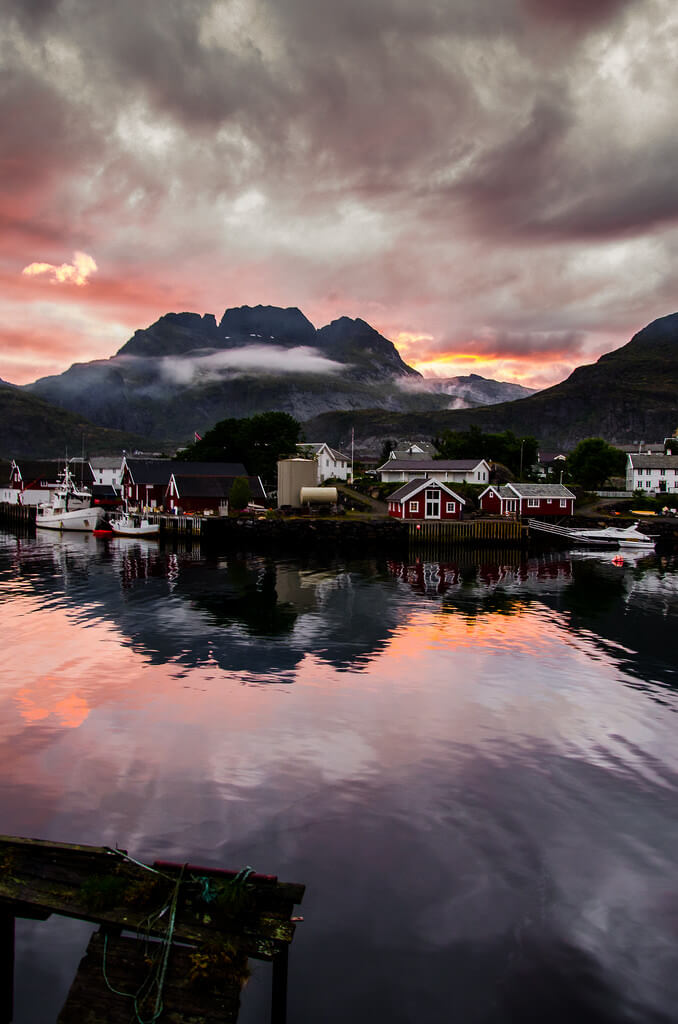 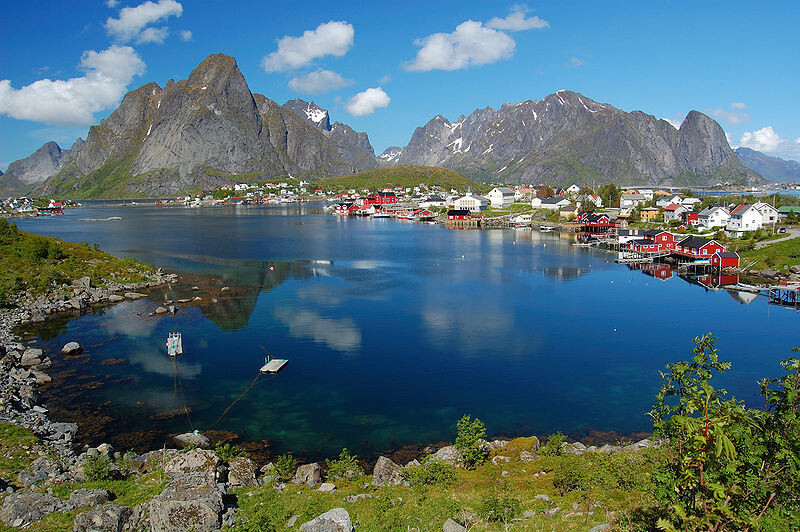 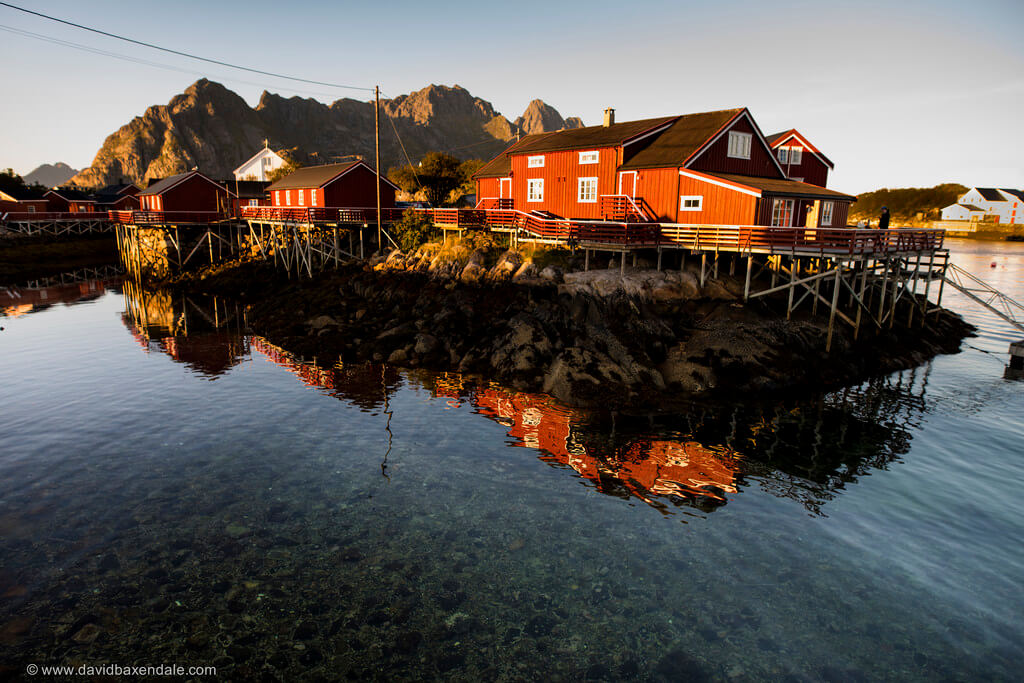 Like most of Norway, Lofoten has large stretches of seashore and wilderness, rich with wildlife and sea life. Moose, otters, puffins, sea eagles, and cormorants are just a few examples of wildlife you might glimpse during your visit. But even if you don’t, Lofoten’s virgin landscapes are alone worth a photo.

The scenery around Lofoten looks impressive in all types of weather, too. If you’re stuck with stormy weather during your visit, you can photograph the rough water and dark clouds, made even more foreboding by the jagged mountains everywhere. 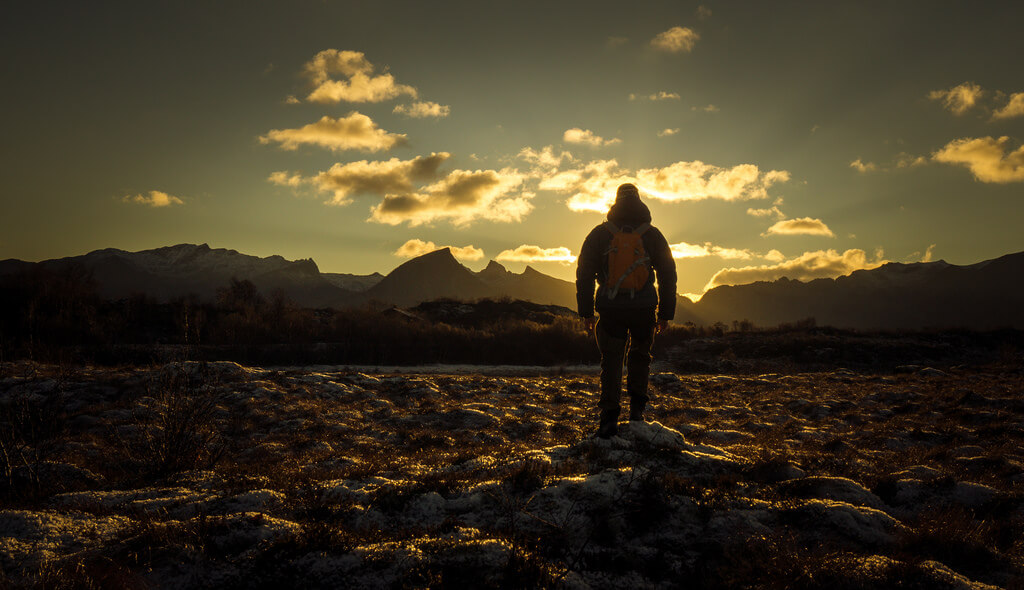 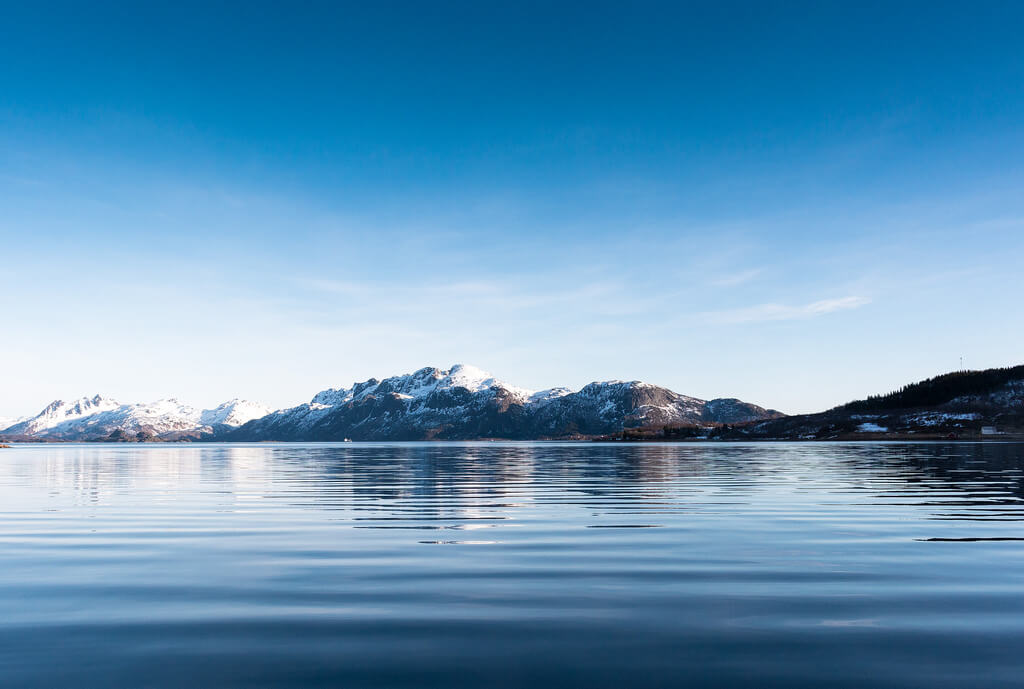 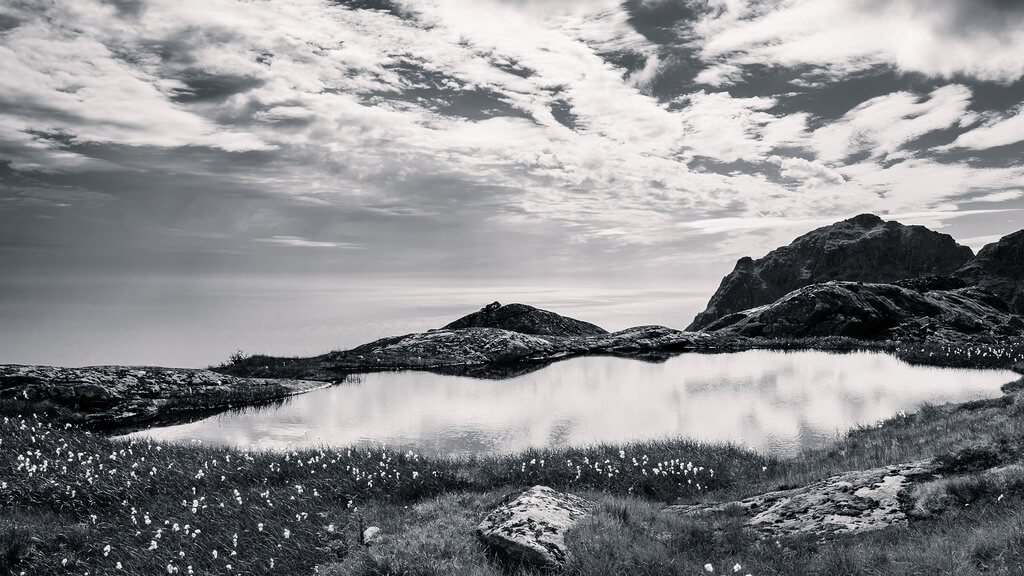 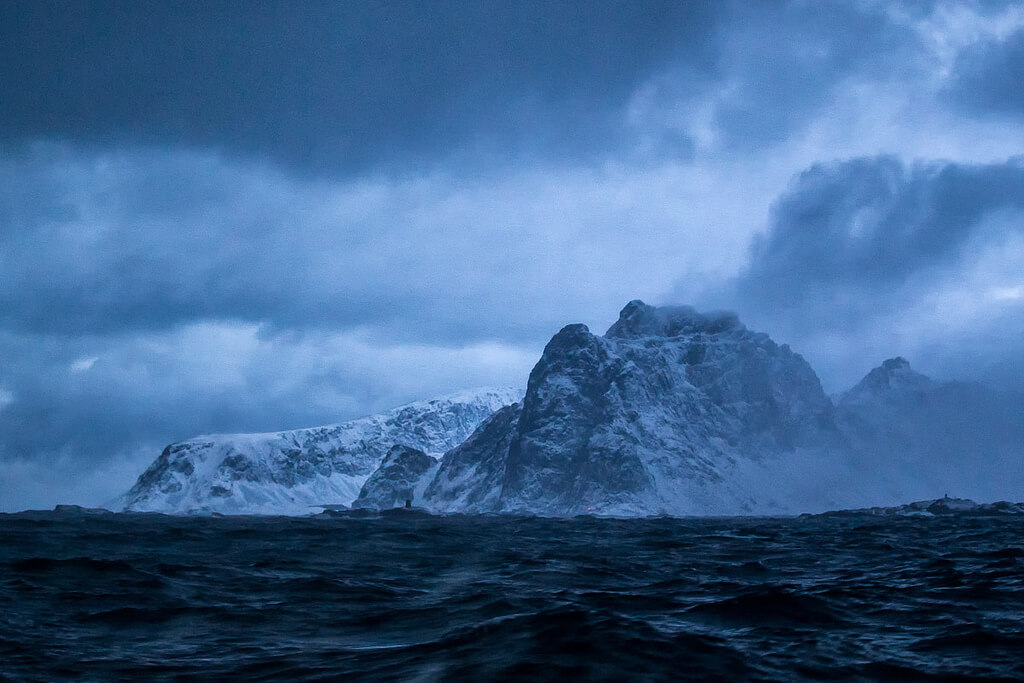 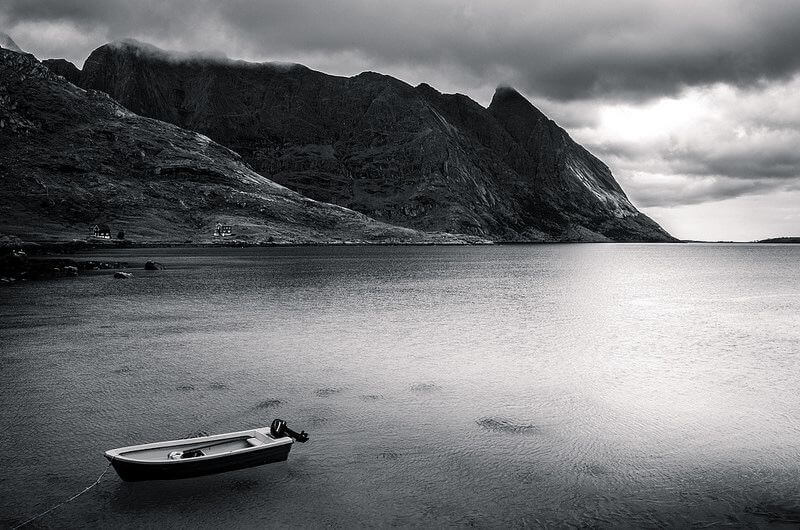 The unique light and atmosphere of the Far North is part of why Lofoten’s beaches, mountains, and fishing villages are so spectacular. They’re charming enough as it is, but then you add the Aurora Borealis or Midnight Sun and end up with a truly remarkable scene.

The Northern Lights are famous for their otherworldly beauty, but the Midnight Sun (and the weeks before it  appears) can be equally incredible for photographers. During this time, sunsets and sunrises connect to create a stunning Golden Hour that lasts from 8 to 12 hours long. You don’t have to rush to get outside at the right time; you just have to be willing to flip your schedule and go out at night. 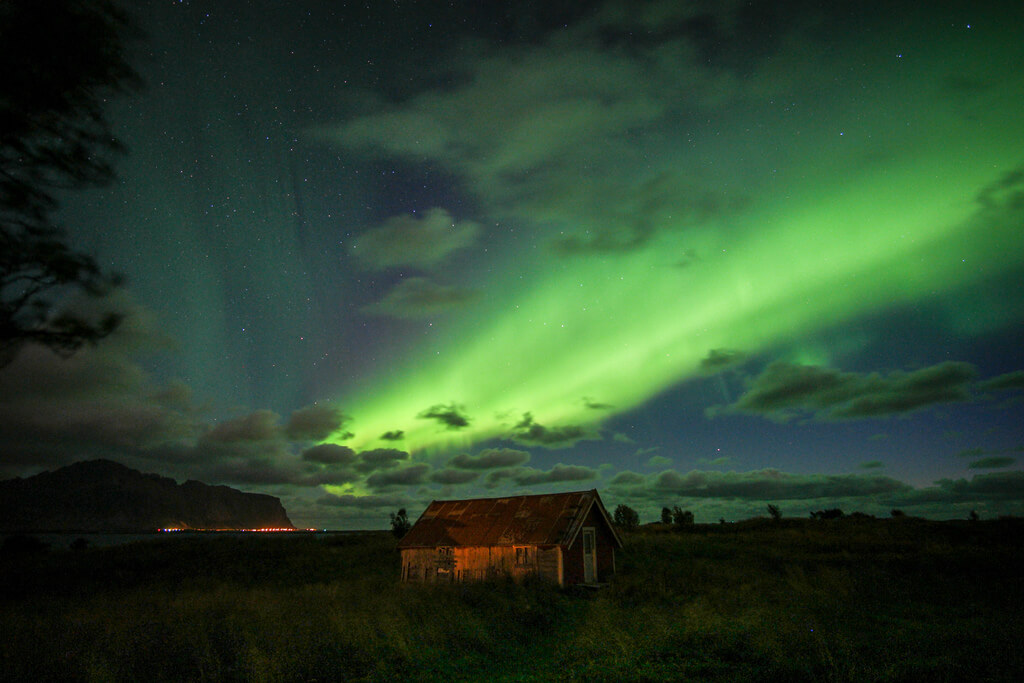 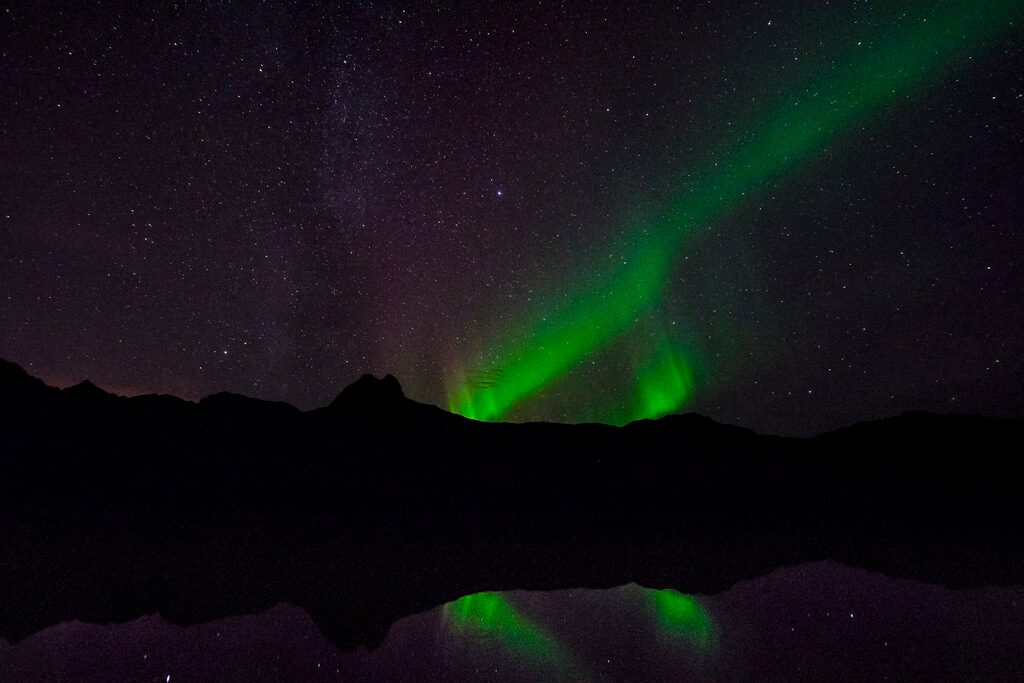 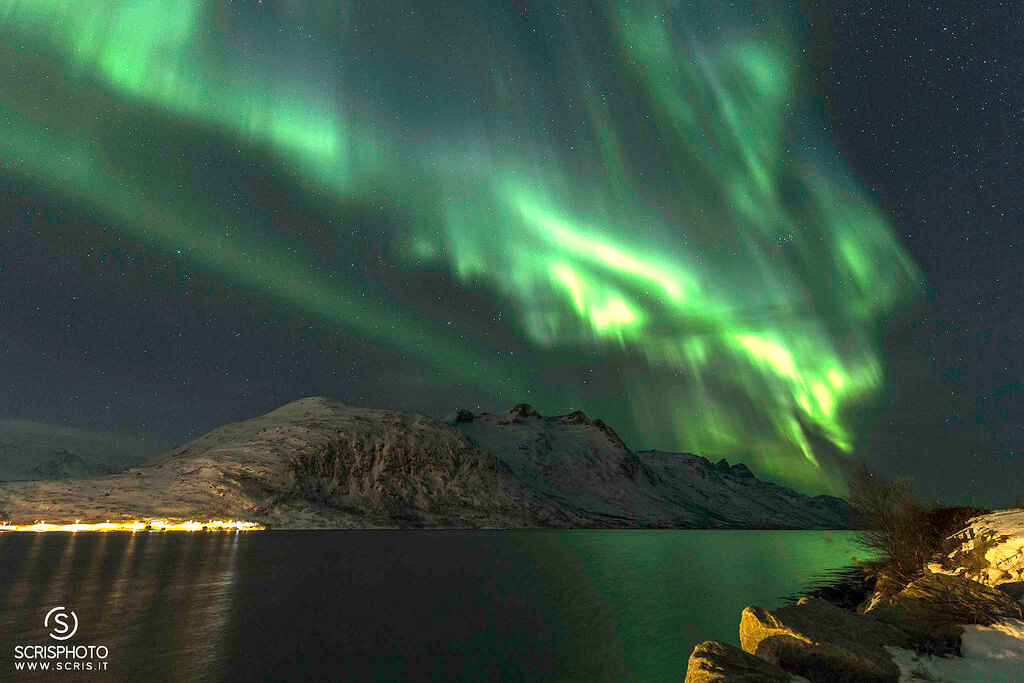 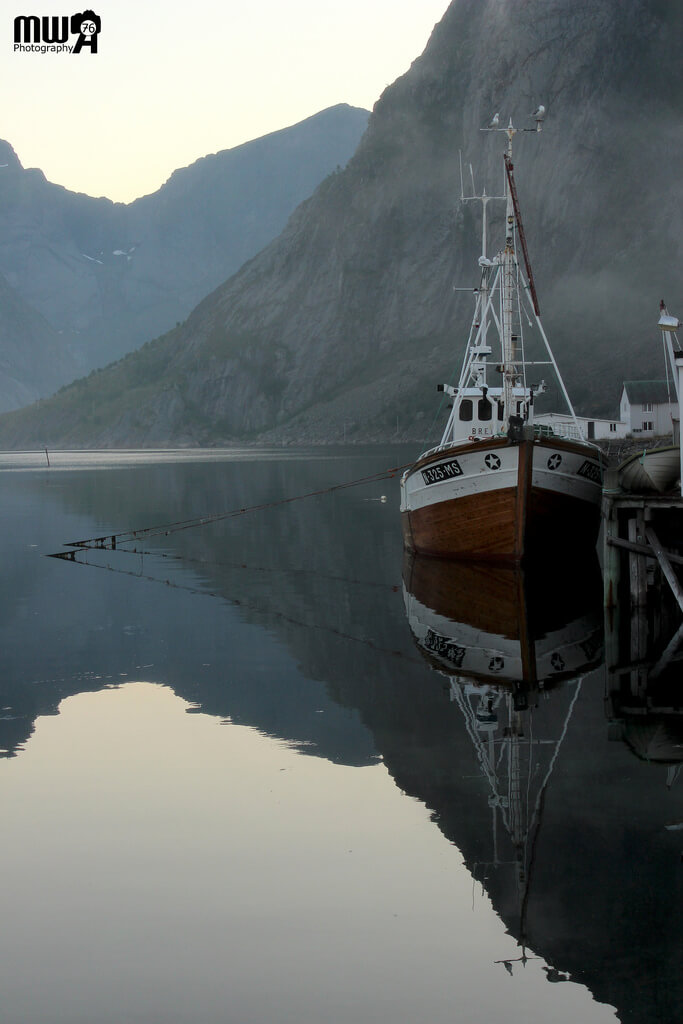 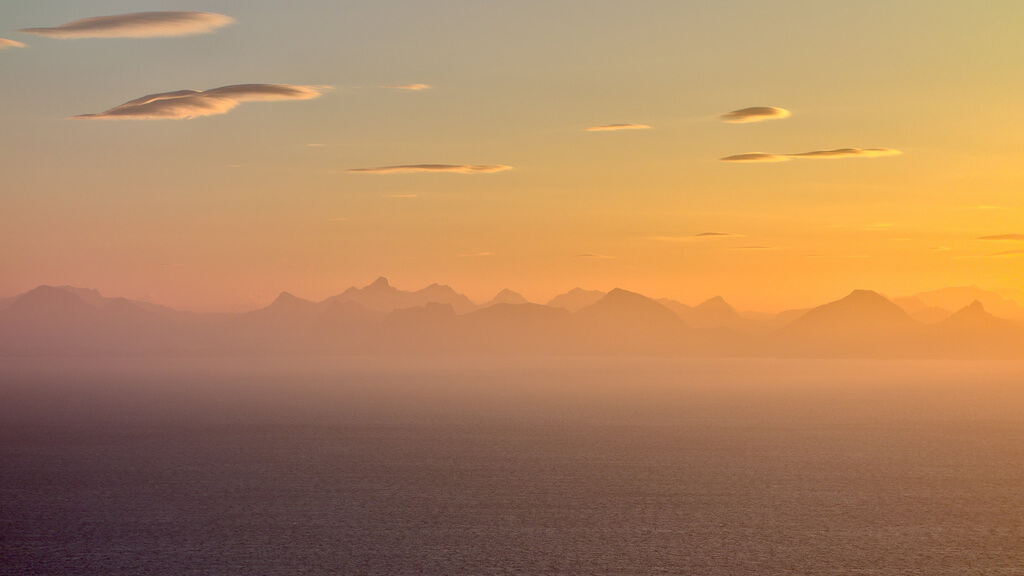 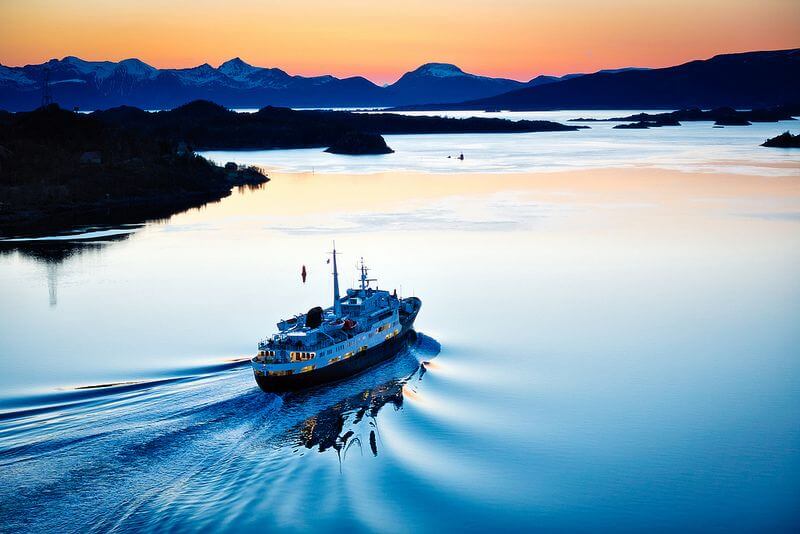