If you’re a resident of Amsterdam, you know how beautiful and diverse the city is. But for people who have never visited, Amsterdam can sound like a shady place, a den of prostitution and drugs. That’s partly true – there is a Red Light District, and marijuana is a thing – but Amsterdam isn’t shady. In fact, it’s one of the safest cities in the world, and one of the most beautiful, too.

A photographer in Amsterdam has a wealth of subjects to choose from, all easy to reach by tram, bike, or foot. If you’re lucky enough to visit the city, here are some of the best neighborhoods to walk around and famous sights to photograph.

Some photographers like to wander freely around neighborhoods; others prefer having a specific destination to go to. If you’re in this latter category, here are a few popular sights to photograph in Amsterdam.

Damrak is the major avenue leading visitors from Amsterdam Central Station into the city. It’s also a canal that was partially filled in to create space for a stock exchange. On the other side of this canal, there’s a row of crooked canal houses directly beside the water, called the Dancing Houses.

These types of houses are all over Amsterdam, but there’s usually a street separating the houses from the water. This is one of the only places where you can shoot them by the water. Though the houses have been photographed countless times, they still haven’t lost any of their quirky charm. 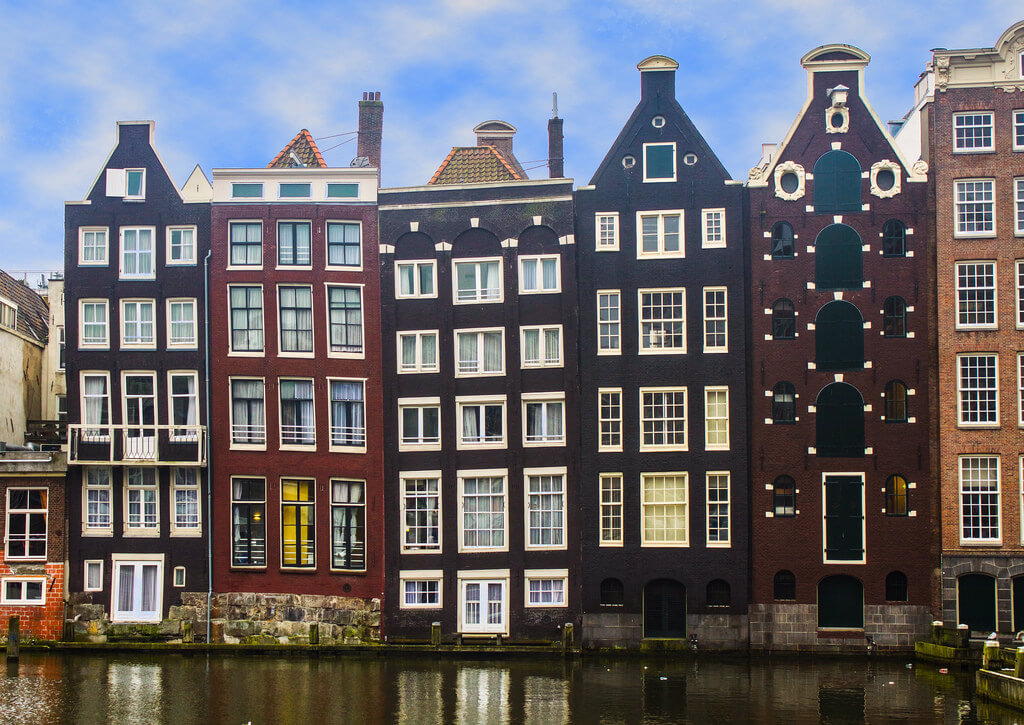 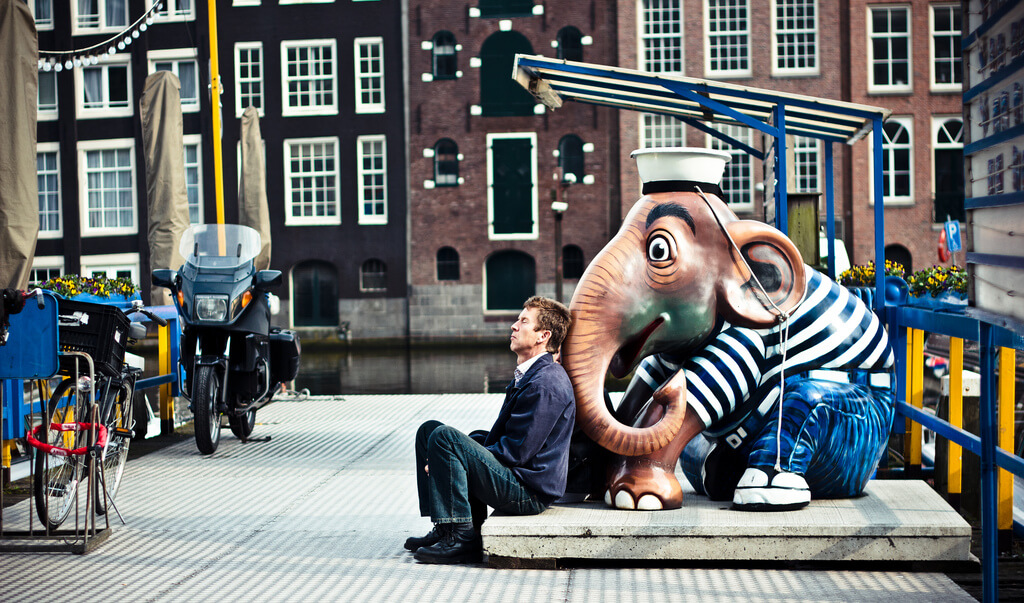 The only other place where you can shoot canal houses directly by the water is here, the Armbrug. It’s a bridge over the Oudezijds Voorburgwal, a canal not far from the Damrak Dancing Houses. You can either set up your camera on this bridge or go on a boat tour that covers this area. Both can give you unique shots, though you’ll have more time to take shots on the bridge than in the boat. 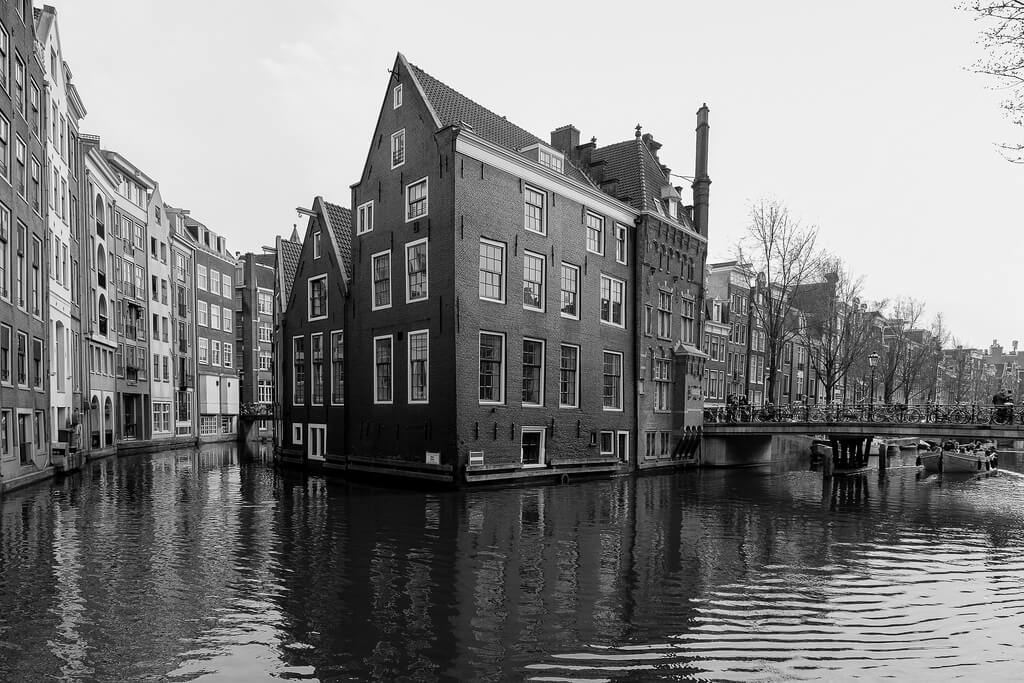 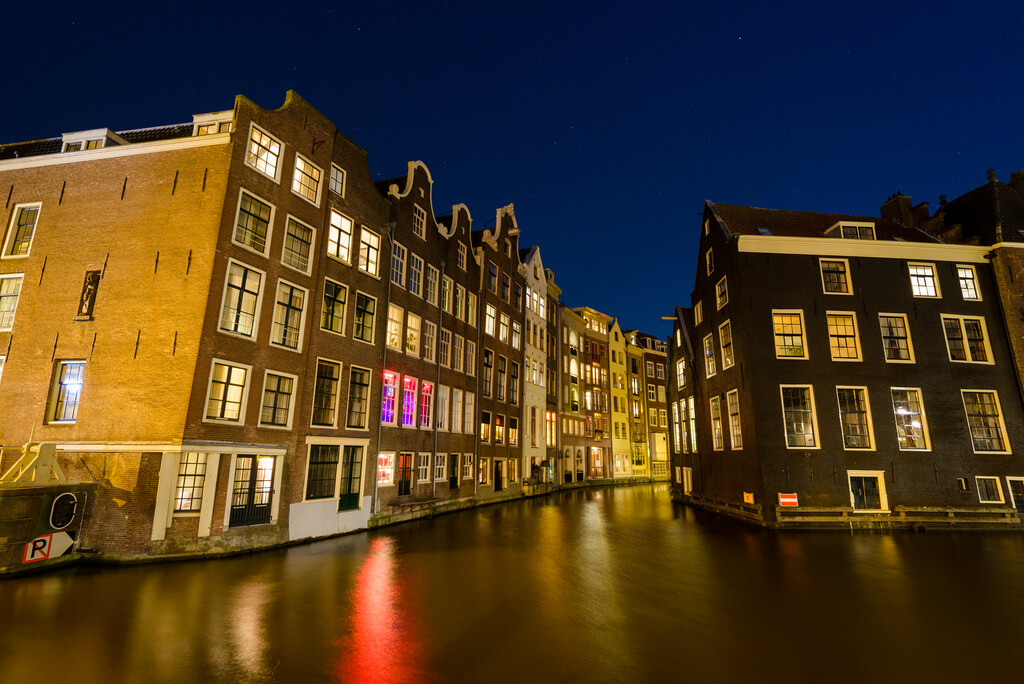 This spot is very popular among photographers, and for obvious reasons. It’s one of the most beautiful locations for photographing the city’s iconic bridges and canals. You not only get a lovely set of bridges, but also a row of historic canal houses in the background. Especially at night, this location is worth seeing. 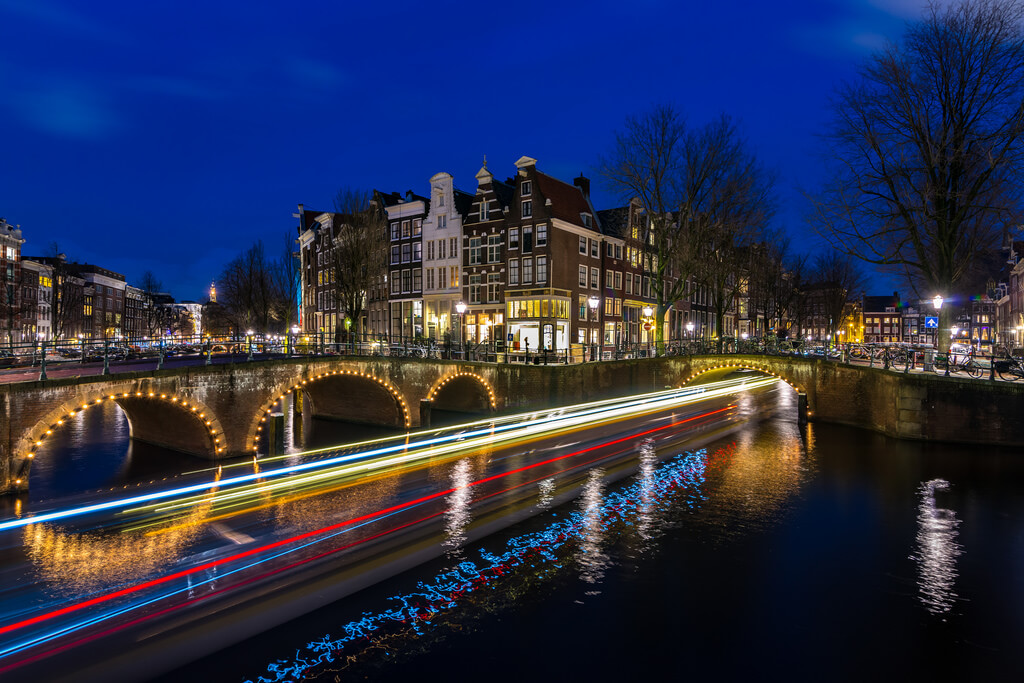 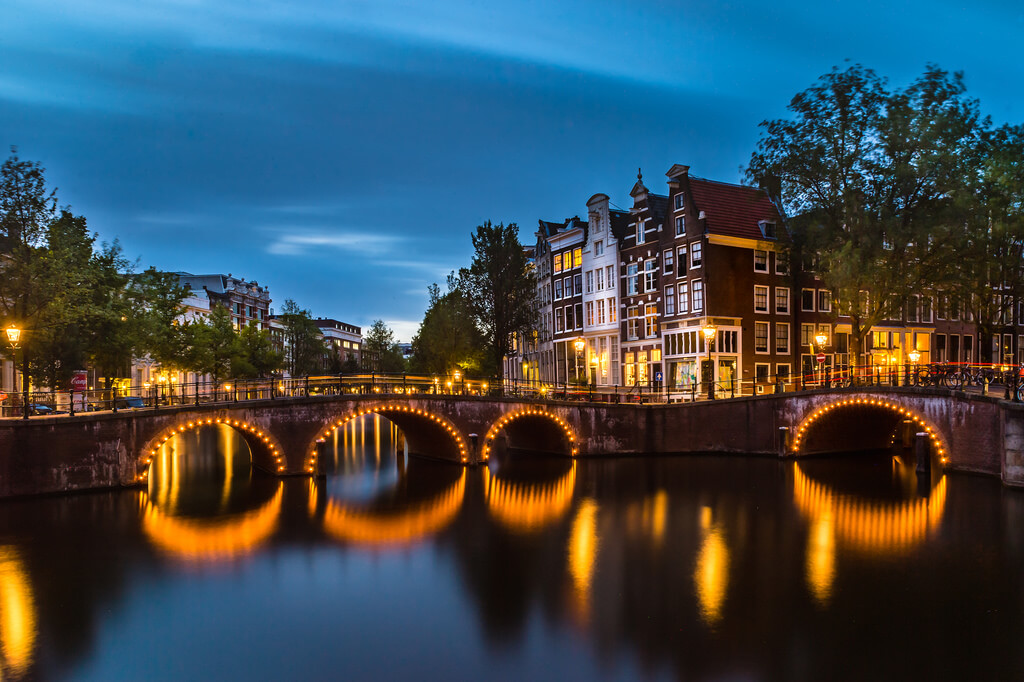 The Staalmeestersbrug, unofficially called the “Bridge of Love” among tourists, is a great place to photograph the Zuiderkerk, a church that’s been painted by many artists, including Claude Monet. In addition to this striking view, you can photograph the many love locks hanging on the bridge. There are so many that the locks have to be periodically removed, as the bridge wasn’t constructed to hold so much weight.

So, depending on when you visit, there is a chance you’ll only see a few locks if they’ve recently been removed. In that case, it might not look like a love bridge at all – but you’ll at least get that lovely view of the Zuiderkerk. 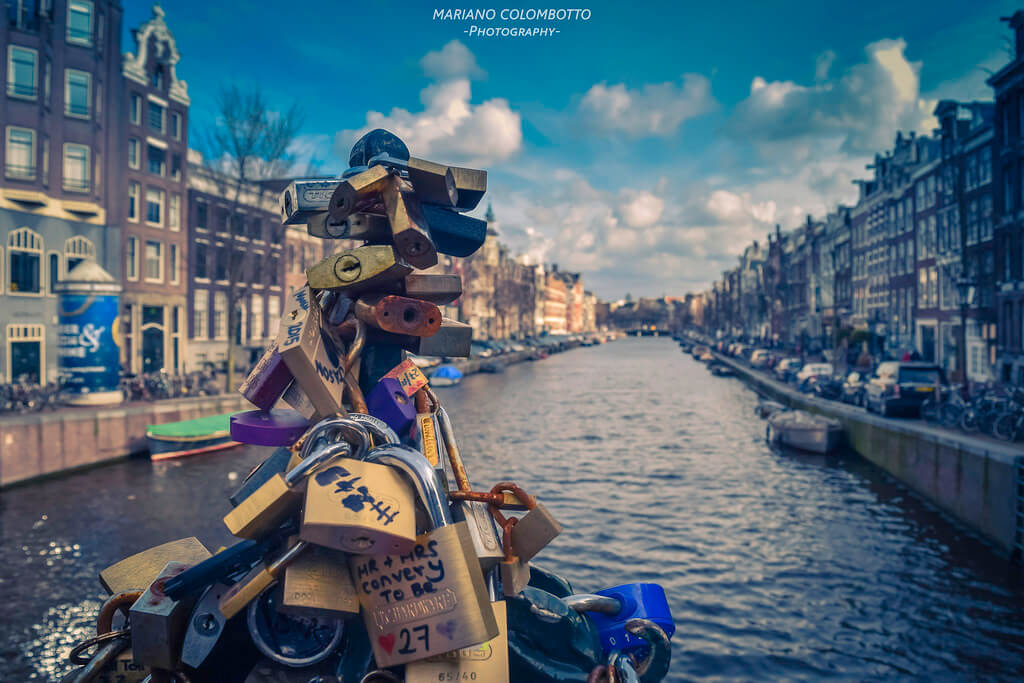 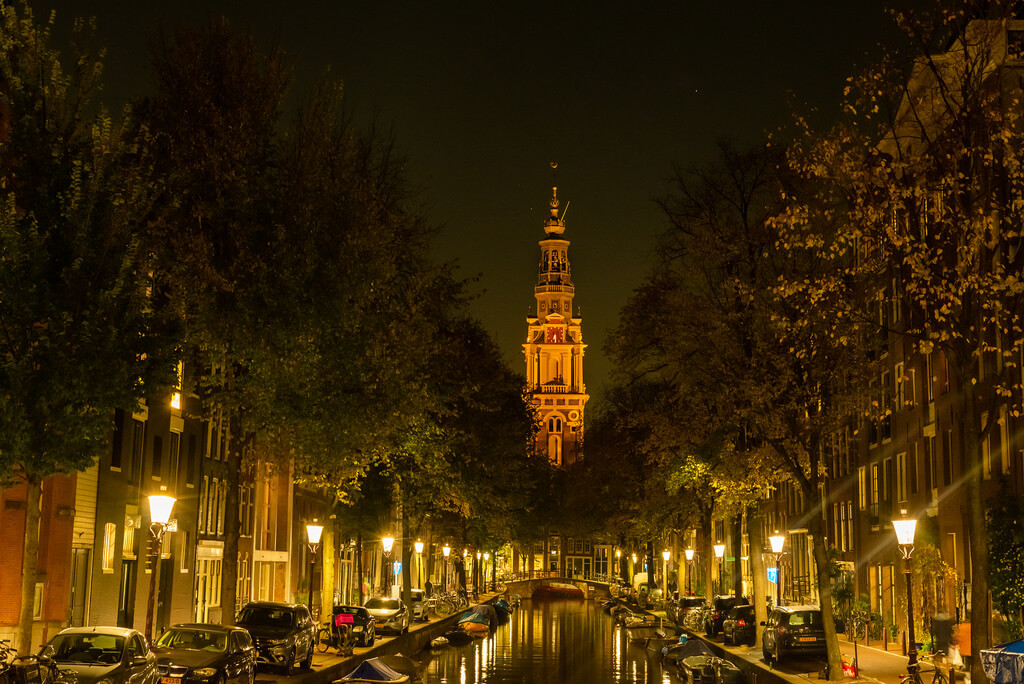 Amsterdam Central Station is a major international railway hub, so it’s quite big. It’s also a national monument with beautiful architecture designed by Pierre Cuypers, the same architect who designed the famous Rijksmuseum, also in Amsterdam.

Both street and architectural photographers will love this spot. You can wander the long hallways inside and watch the travelers, or you can circle the building outside and admire its design. There are plenty of people and subjects to photograph, that’s for sure. 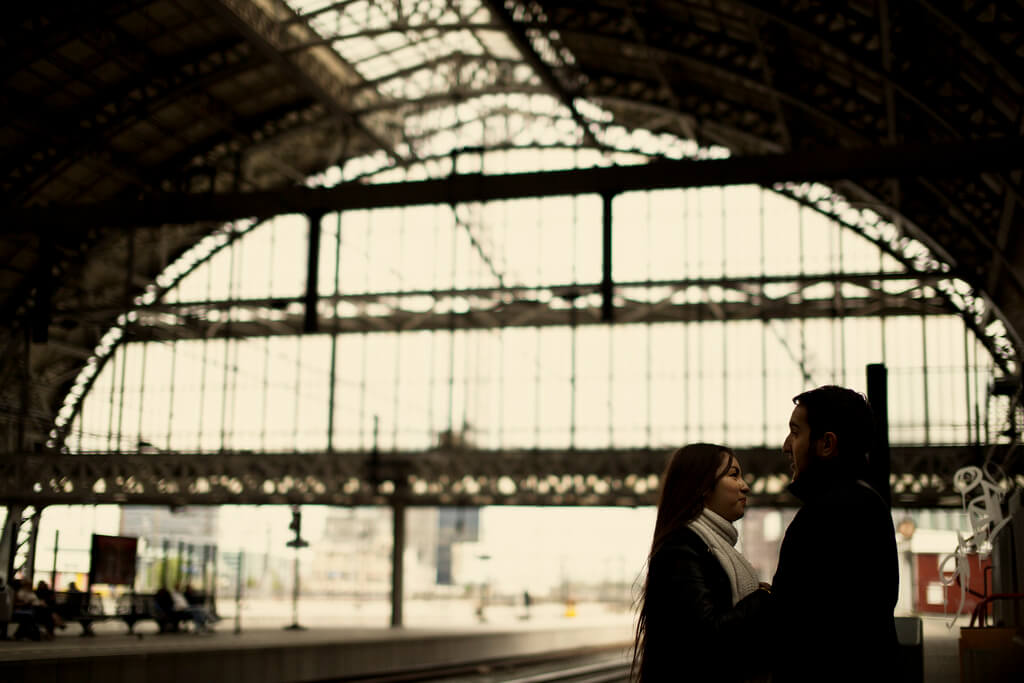 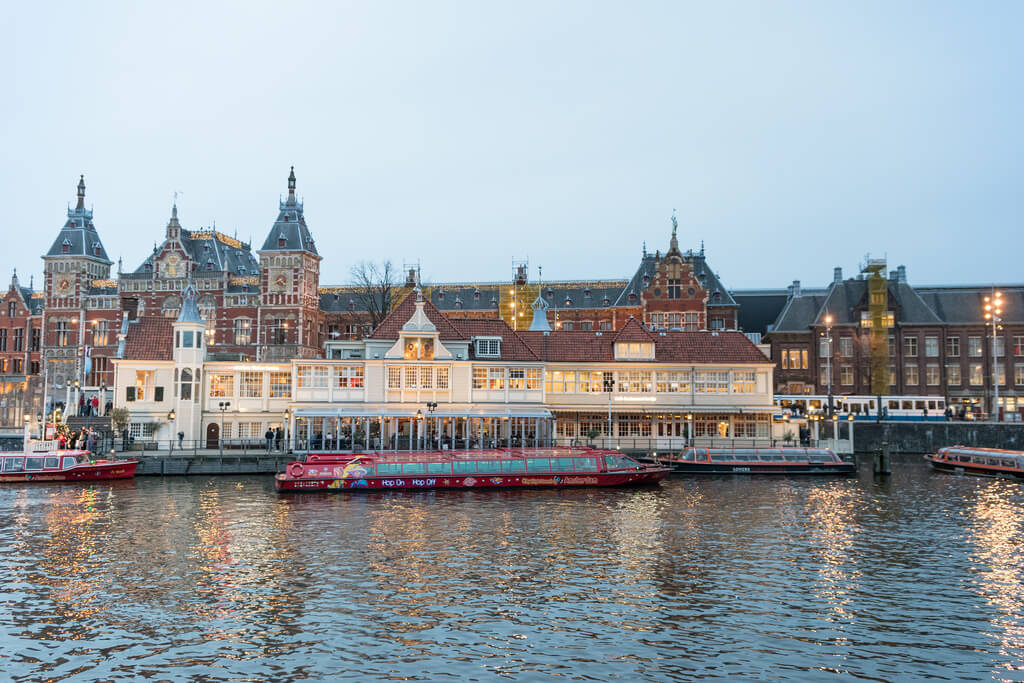 The Netherlands is known for its tulips, as it’s the world’s top producer and exporter of the flower. If you leave the city in the spring, you can see long stretches of gorgeous tulip fields in the countryside, or you can visit the Keukenhof, the world’s largest flower garden, located southwest of Amsterdam.

But the Dutch also grow many other plants and flowers in addition to tulips. The country is a major hub for the flower trade. You can see this diversity of flowers and plants by visiting the flower market in Amsterdam. It’s a major tourist site, so it’s often very crowded, but it’s nevertheless worth seeing.

For cool shots, you don’t even have to go through the market. You can stand across the canal instead to get interesting shots of the flower stands, right by the water. 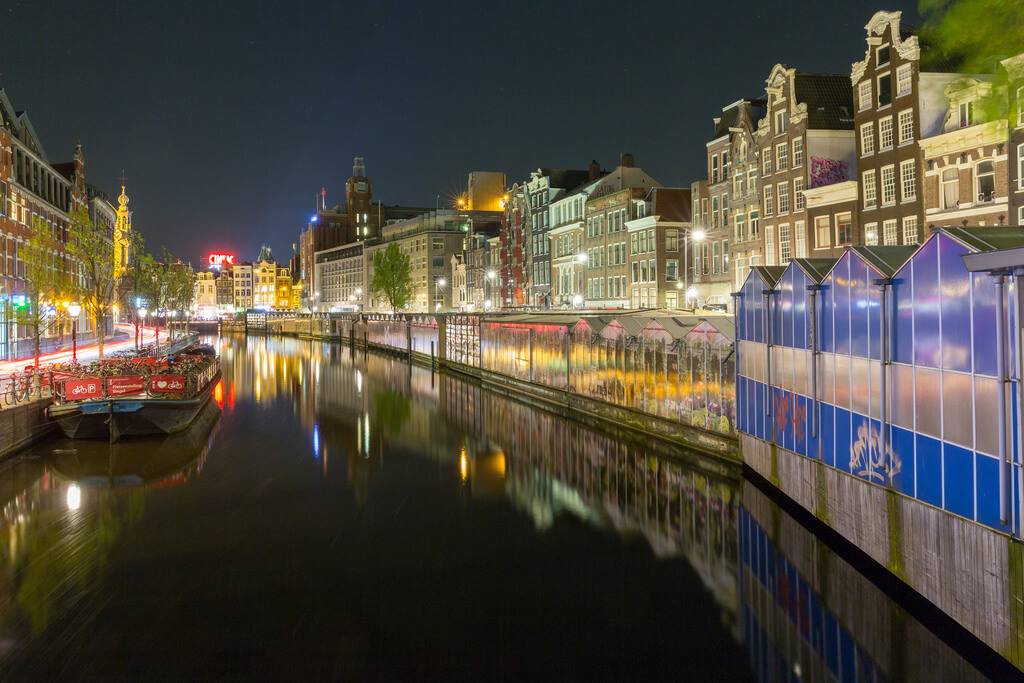 Amsterdam has a lot of lovely neighborhoods. You’ll likely find good photography subjects no matter where you go. But if you only have a few days and want to get the most out of your wanderings, here are some areas that are particularly photo-worthy.

The Grachtengordel (or just the Prinsengracht)

Every canal (or “gracht”) in Amsterdam has a name, and four famous ones are the Singel, the Herengracht (Lord’s Canal), the Kiezersgracht (Emperor’s Canal), and the Prinsengracht (Prince’s Canal). These four together make up the Grachtengordel, or Canal Belt, a gorgeous residential neighborhood on the west and south side of Amsterdam.

Because the canals are so long, you could easily walk around the Grachtengordel for an entire day or longer. But if you don’t have that kind of time, you can start with the Prinsengracht, the outermost canal connecting the Grachtengordel with another lovely neighborhood, the Jordaan.

Along the Prinsengracht, you’ll see a lot of picturesque bridges and canal houses from the 17th century, as well as notable tourist sites like the Anne Frank House. You can take a detour into the Nine Streets, a vibrant shopping area, or wander into the Jordaan for lunch. Everywhere, you’ll find beautiful scenes to shoot. 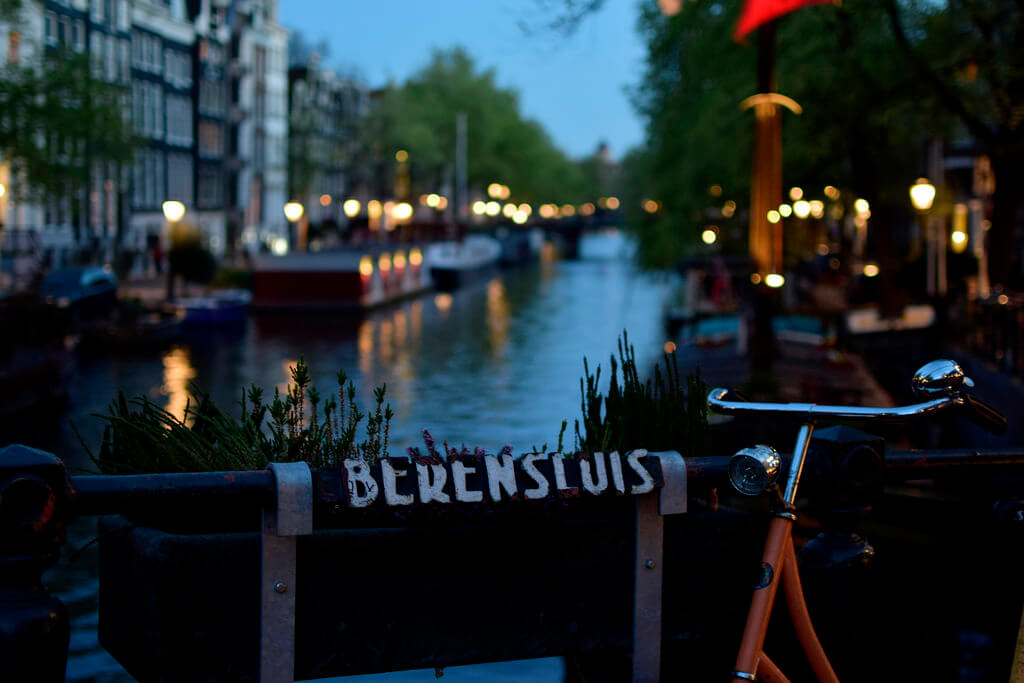 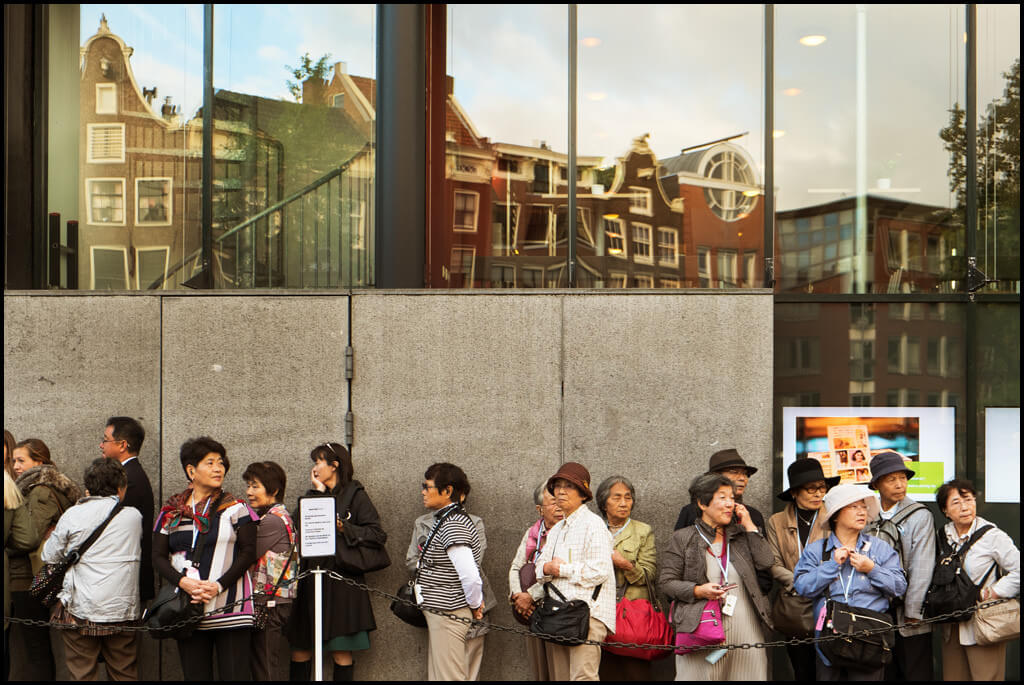 If you arrive in the center of Amsterdam by train, you’ll already be in a prime location for a photo walk. Starting with Amsterdam Central Station, you can photograph a lot of interesting architecture and beautiful lights as you walk around Oosterdok. The floating Sea Palace, the boat-shaped NEMO science museum, and the footbridge connecting the two are all great architectural subjects to photograph.

To be clear, Oosterdok isn’t really a neighborhood, but rather a body of water created when a dam (the Oosterdoksdam) was built in 1832. In other words, you’ll be next to water for the entire walk, allowing for lovely reflection photos and views of the sky.

This loop is also ideal if you only have a short time in Amsterdam. For instance, if you need to catch a flight, you can do this photo walk within an hour, then get immediately on a train to the airport. It’s a perfect walk for a long layover, as it’s quick, low-stress, and easy to navigate.

b k – Amsterdam skyline from Oosterdok 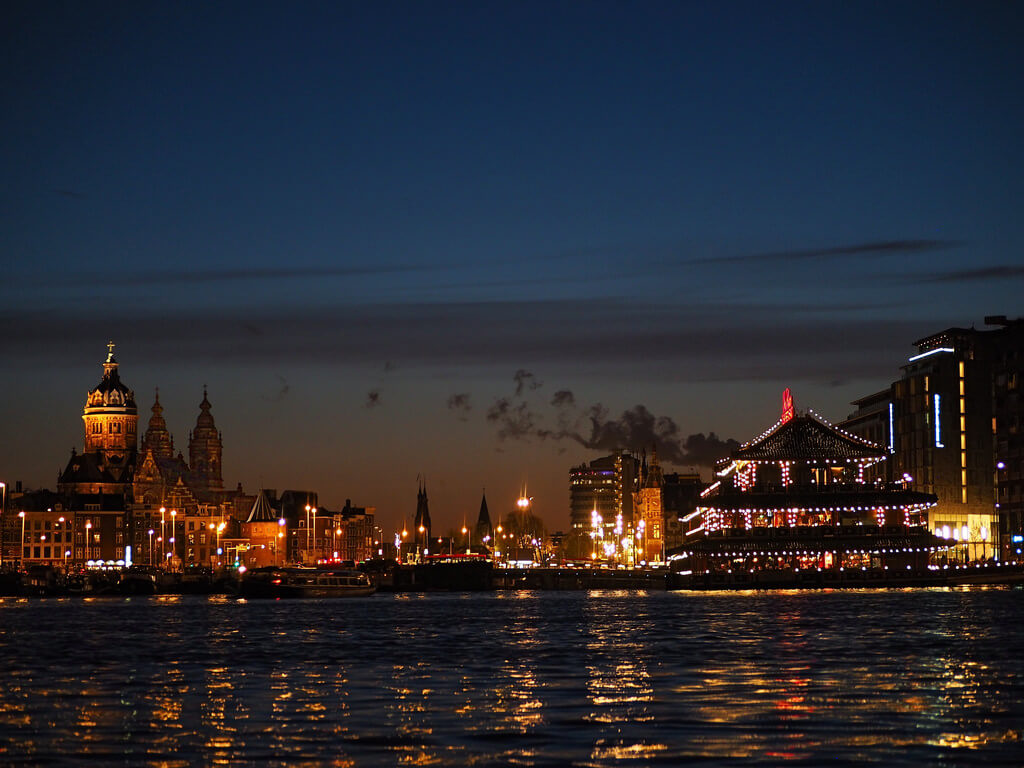 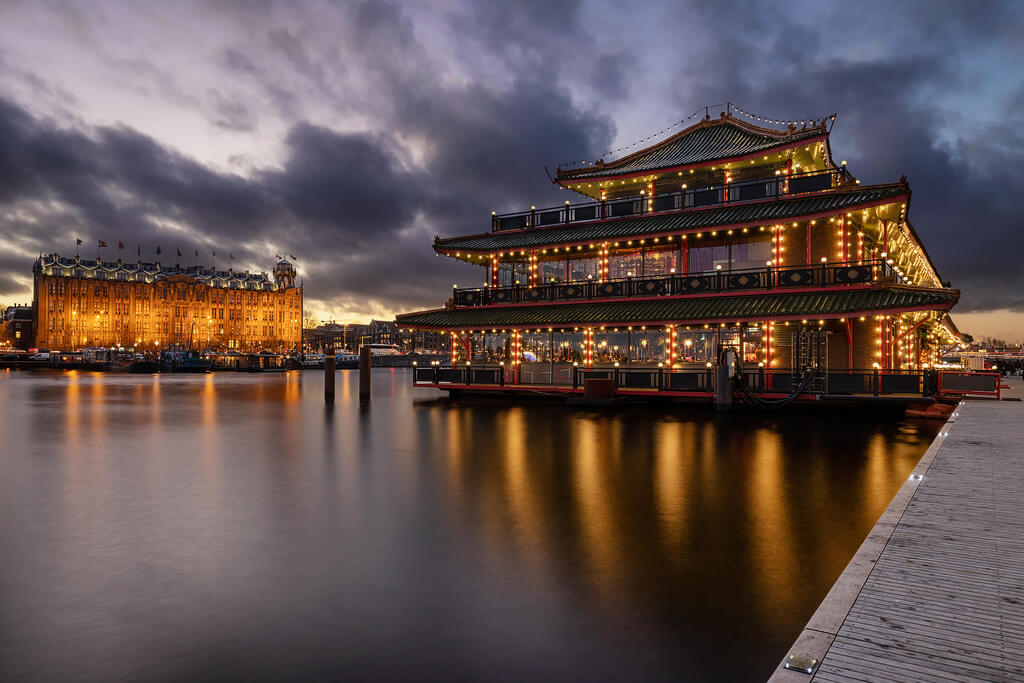 End of the Amstel River

Amsterdam was originally built around a dam constructed in the 13th century at the mouth of the Amstel River. This river continues to flow into the city nowadays, feeding into Amsterdam’s many canals. Near the endpoint of the Amstel, you’ll find many busy restaurants and cafes, along with culturally-significant sites, such as the opera house, a handful of museums, and a couple theaters.

But the Amstel itself is also beautiful to see, stretching wide between rows of boats. You can get a good shot of it by standing on a bridge, like the Blue Bridge or the Skinny Bridge, or by going out on a boat ride. 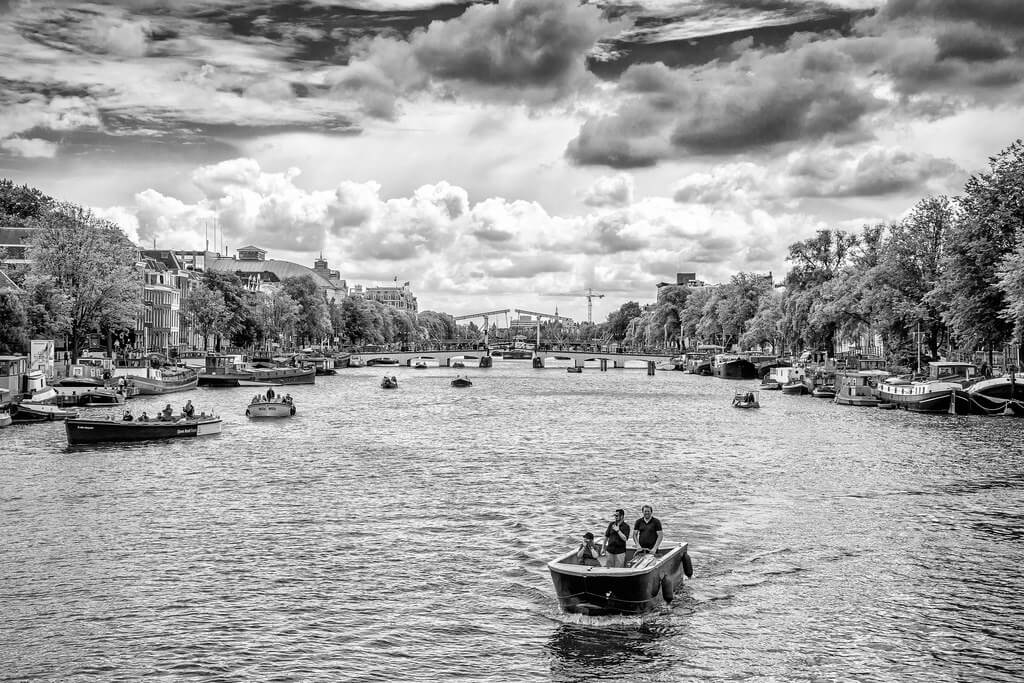 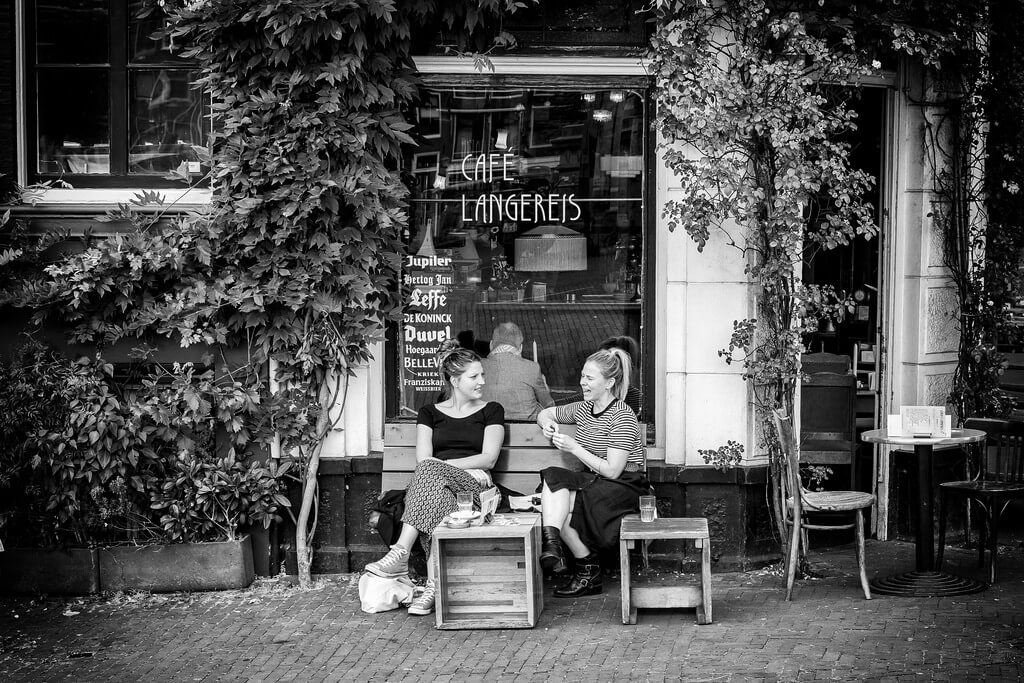 Vondelpark is one of the top sights tourists often miss in Amsterdam. Opened in 1865, it has 120 acres of gardens, art, and green grass, speckled with people picnicking. There are also several cafes, a big playground, and an open-air theater that has regular concerts and performances in the summer.

While you’re visiting Vondelpark, be sure to check out Leidseplein just outside the park’s northeast entrance. The area is hotspot of theaters, restaurants, and nightclubs with live music. It’s humming with activity at night, but the buildings are beautiful enough to see during the day, too. 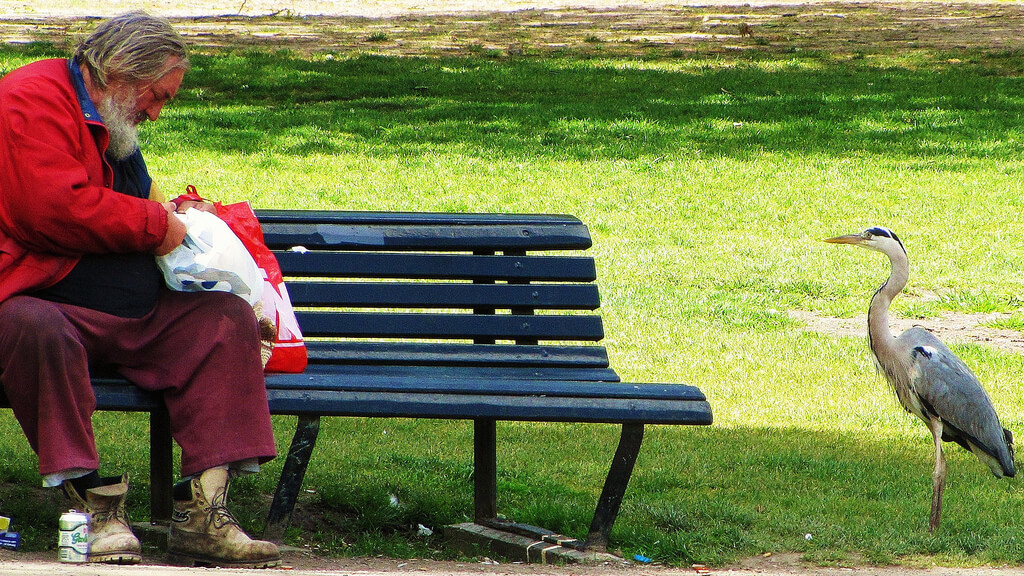 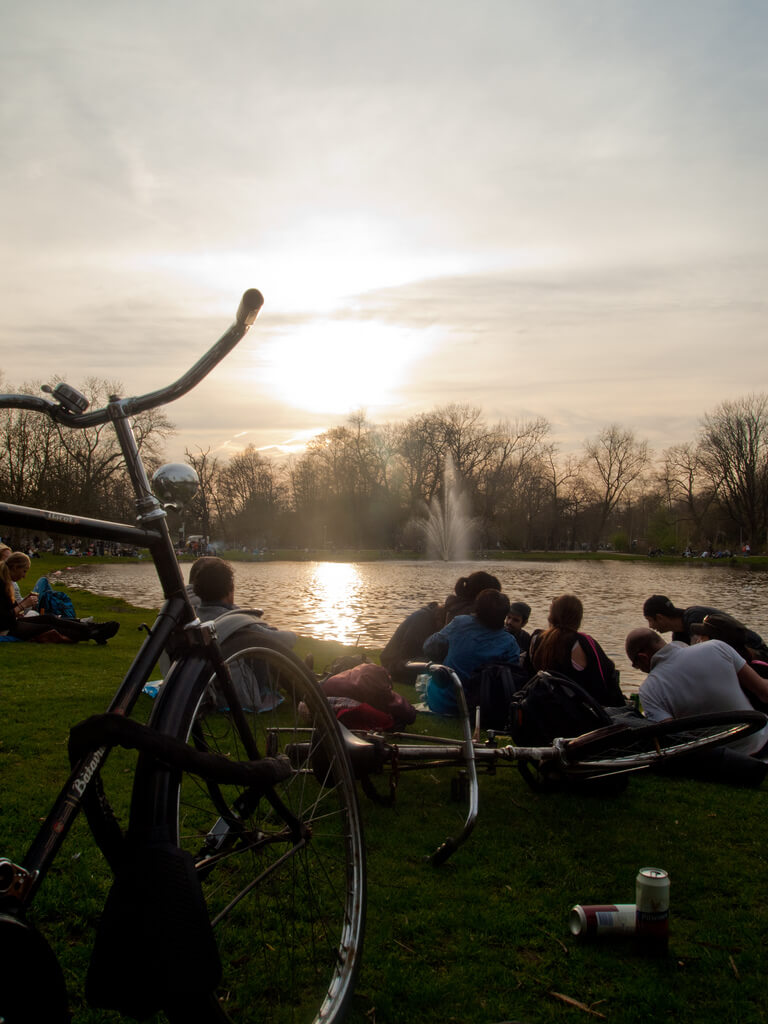 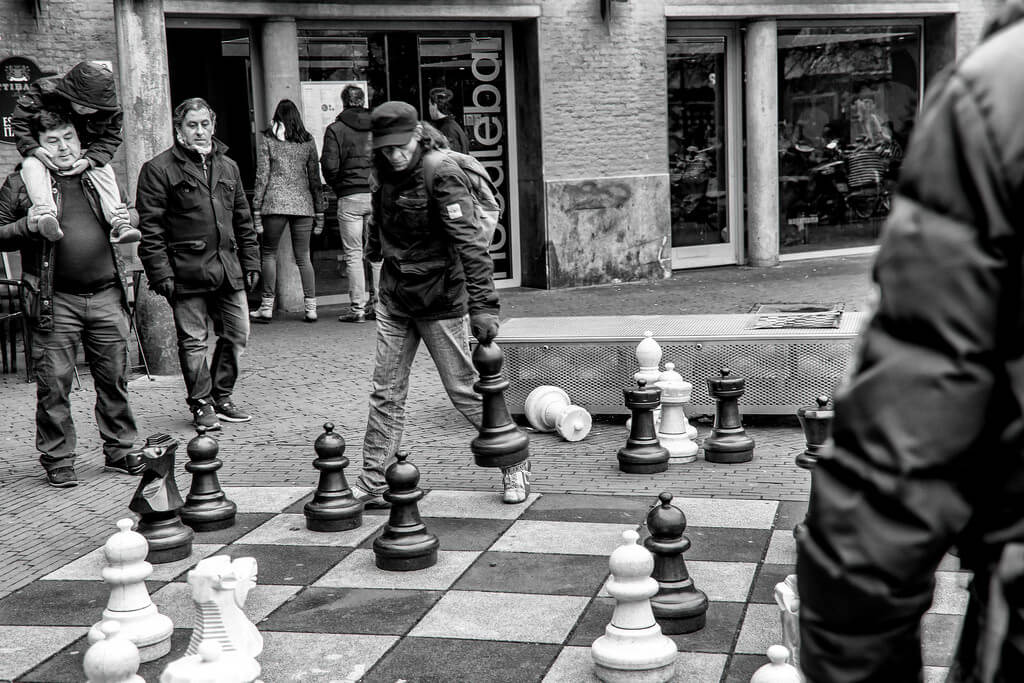 Of all the cities in the world, Amsterdam has the most museums per square meter. There are over 50 museums, from world-class art museums like the Rijksmuseum to small, niche museums like the Cat Museum and the Handbag Museum. (There are also two photography museums, the FOAM and the Huis Marseille.)

Several of the most significant museums in Amsterdam are in the Museum Quarter, located near Vondelpark. This area also has a grand concert hall and a peaceful stretch of green, perfect for sunny days. There used to be the letters “I Amsterdam” in this area, too, but they drew too many tourists taking selfies that the city had to remove them. 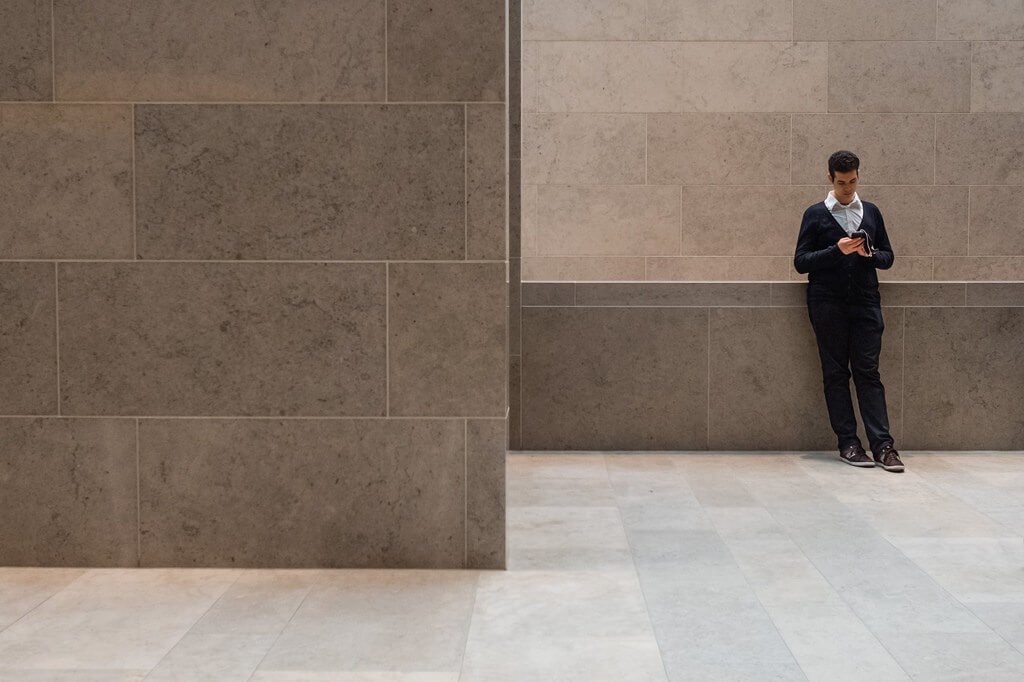 If you want to get away from tourists yet still have cool sights to shoot, head to North Amsterdam. You can reach it by taking a free ferry from Central Station. Just by crossing the water, you’ll immediately be in a totally different atmosphere.

Instead of crowds and old, classically-beautiful buildings, you’ll have more open space and modern buildings, like the Eye Film Museum. You’ll also see more graffiti and street art, untouched by tourism. If nothing else, you can get a fantastic view of the city from the A’DAM Lookout, a short walk away from the ferry. 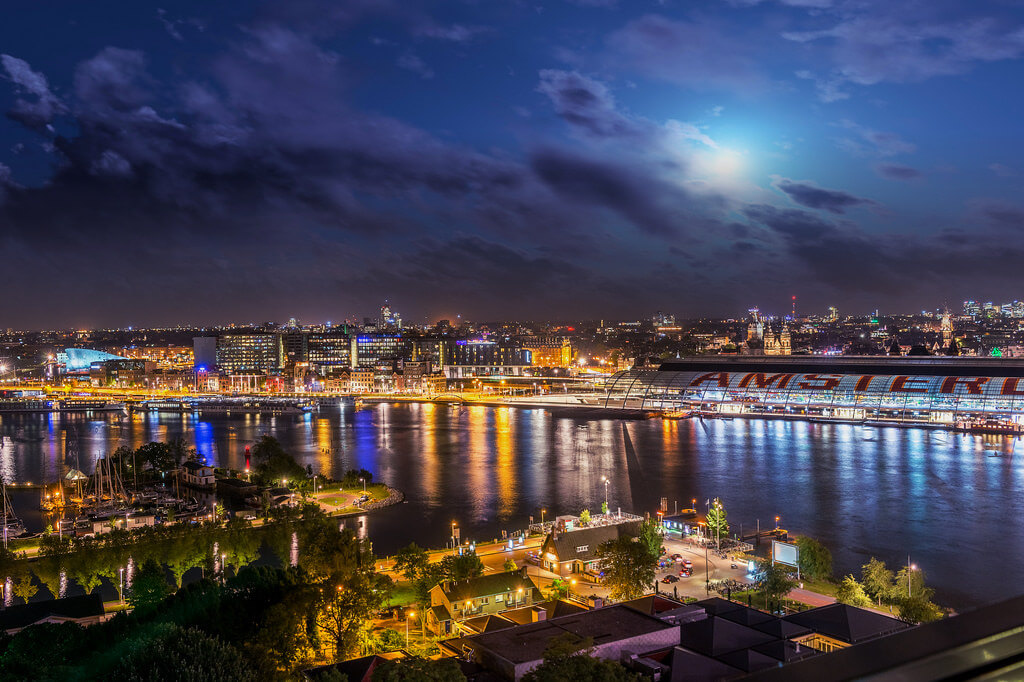 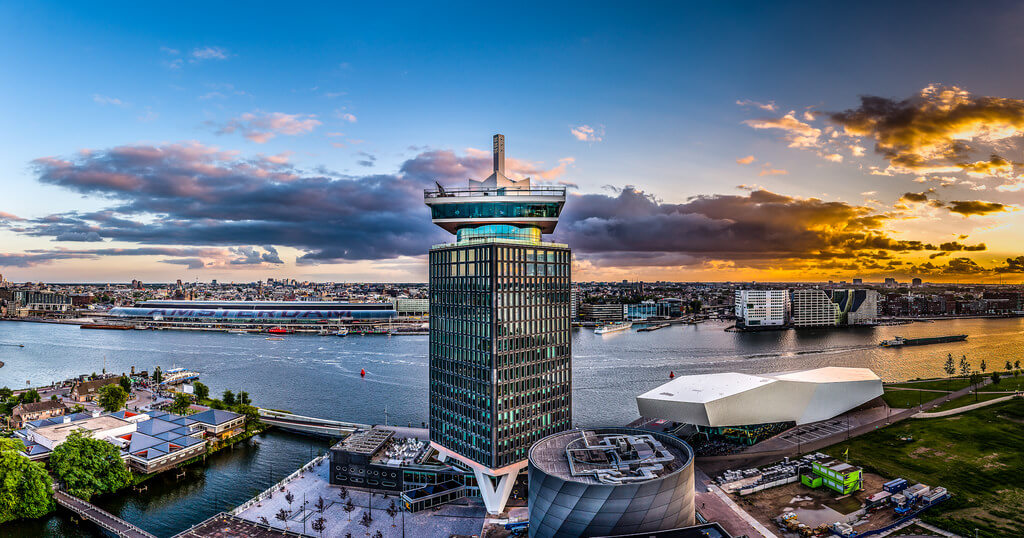 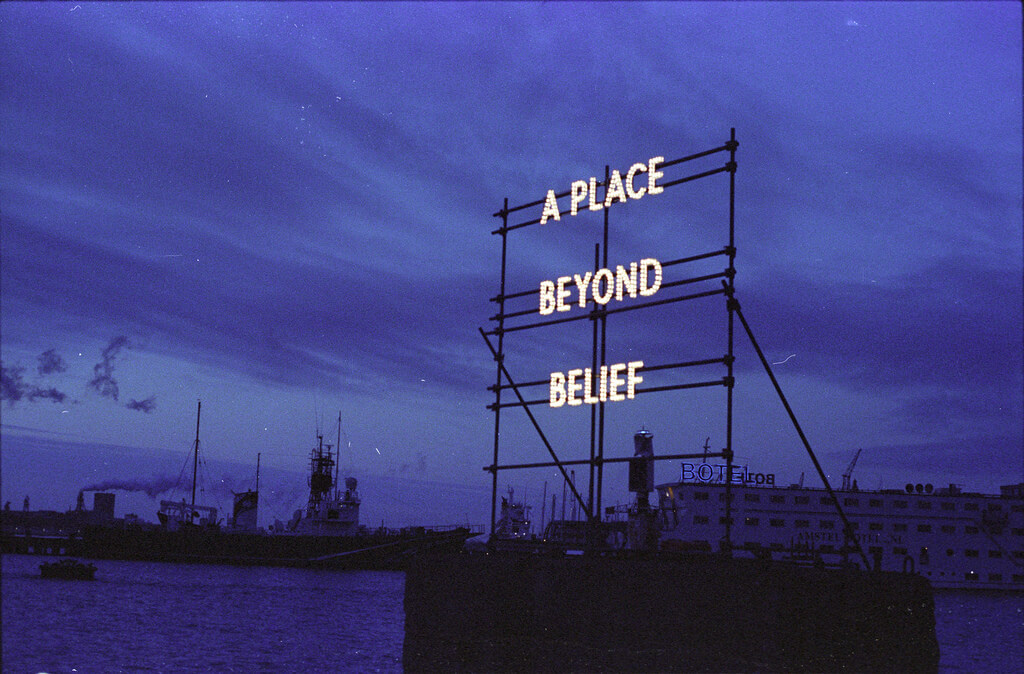 You might’ve noticed that we’ve excluded the Red Light District from this list of neighborhoods. That’s because photography isn’t welcome in the Red Light District, at least not when you’re photographing the sex workers. If you nevertheless decide to photograph them, your camera could be confiscated, and you might be verbally/physically abused by the people working in the District.

However, photos of the beautiful buildings, churches, and canals in the Red Light District are allowed. So, if you’re keen on getting a cool shot of the red lights, you can try shooting on a bridge, putting distance between yourself and the sex workers. This way, you can capture the glow of the red lights while still respecting the rules of the District. 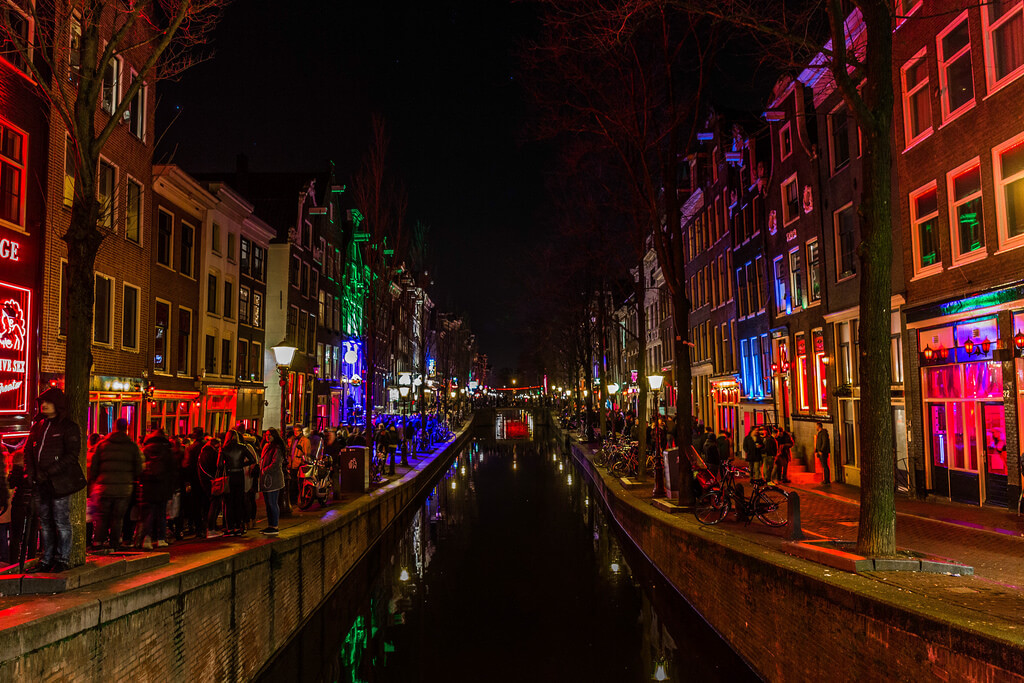 If you miss out on any or all of the above neighborhoods, no worries! You’ll still see plenty of interesting sights and scenes to photograph in Amsterdam. Take this list as a starting point for your own trip, and discover your own favorite neighborhoods. Wherever you wander, be sure to get at least one awesome bicycle photo! 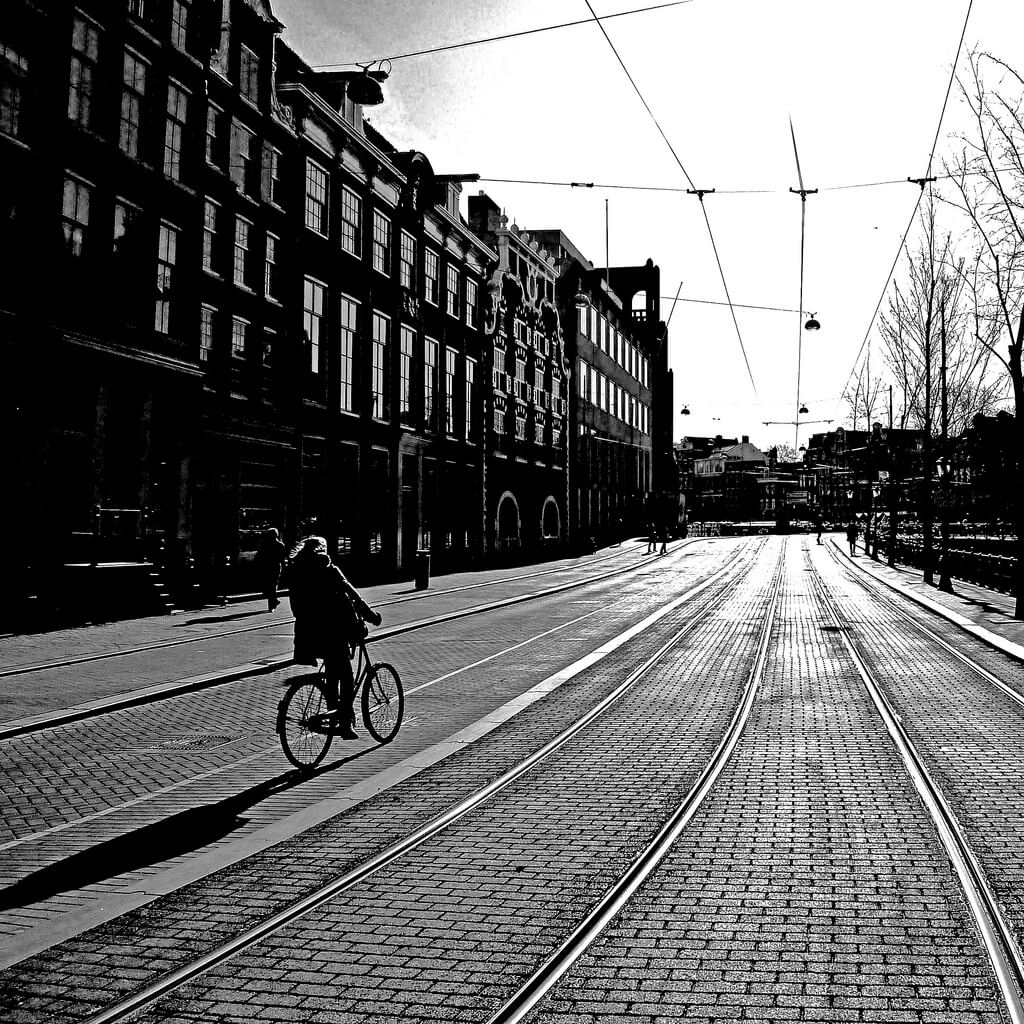