This is part 5 of The Simple Guide to Photographing Big Mountains.

Photographing people in a mountainous environment can be a great way to complete your story or adventure. People give scale to the mountains and help to give the viewer a connection to the image. Adding people to a beautiful mountain scene can turn a good photo into a great photo. Here are a few tips on how to successfully include people in your landscape photos. 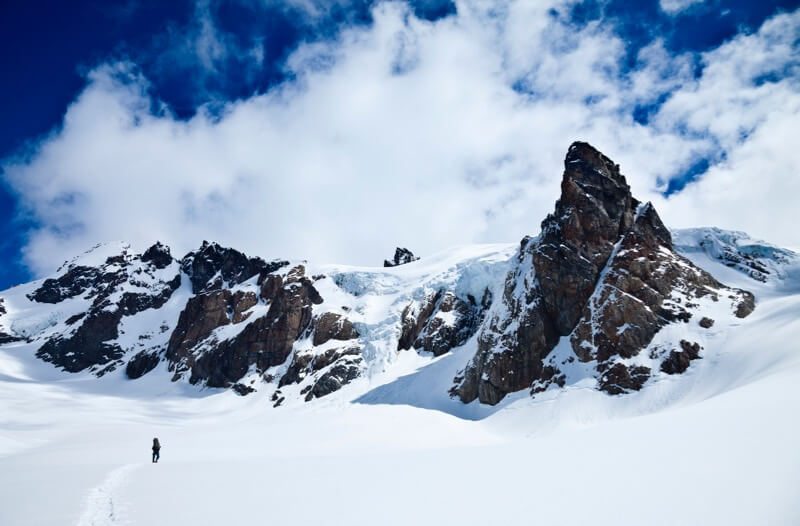 When I am photographing people in a landscape, the first thing I always look for are backgrounds. A background is almost more important than the people, since a good background makes a person stand out in the landscape. If you do not carefully consider your background, then the figure will get lost in the patterns and textures behind them.

While on a mountaineering trip in Chile, I had my friend pose on a rock in front of these jagged peaks. I originally had composed the shot with him in the shadow to his right. Then I noticed that the peaks were casting a perfect arch with their shadow. I knew he would fit right in there, so with some careful maneuvering, I was able to place my model in a perfect patch of light, making him really pop out of the scene. 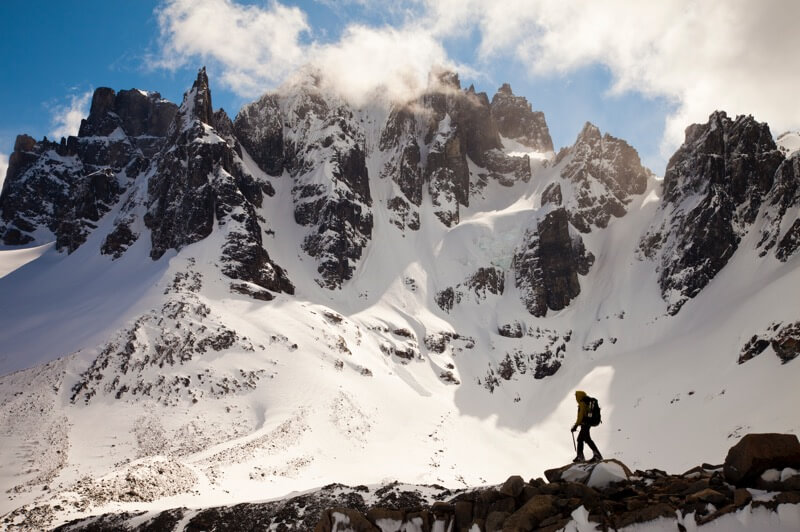 One of the most important elements of getting great photos of people is body position. In the outdoors, getting your model’s body position correct is a very subtle art, but can really make a difference in the image. When the model is standing still, I always like to see a small gap between the torso and arms, I also want to see space between their legs. Have your model look toward the action or subject (mountains, light, etc.), but make sure you can still see at least part of their face. The key to posing models is to get those elements without looking like it was posed. You want all the people in your shot to look and move naturally.

While climbing in the Himalaya, I photographed my friend very high on Lobuche East. There are three elements that make his body position work. First, his face is fully visible with a good expression. He is also looking across the frame where I left a lot of space; the image would feel very cramped if he were looking to the right side of the frame. Second, there is a slight space between his arms and legs. The small space next to his right arm shows separation, and the separation between his left foot and right knee is critical to the overall body position. Had these elements been touching, they would have blended together from a distance, and the body position would not have been as clear. The third element is the dynamic movement of the body position. It is clear (mainly from the space near his foot) that he is in the middle of a stride. This gives the viewer a sense that he is climbing and not just standing there. 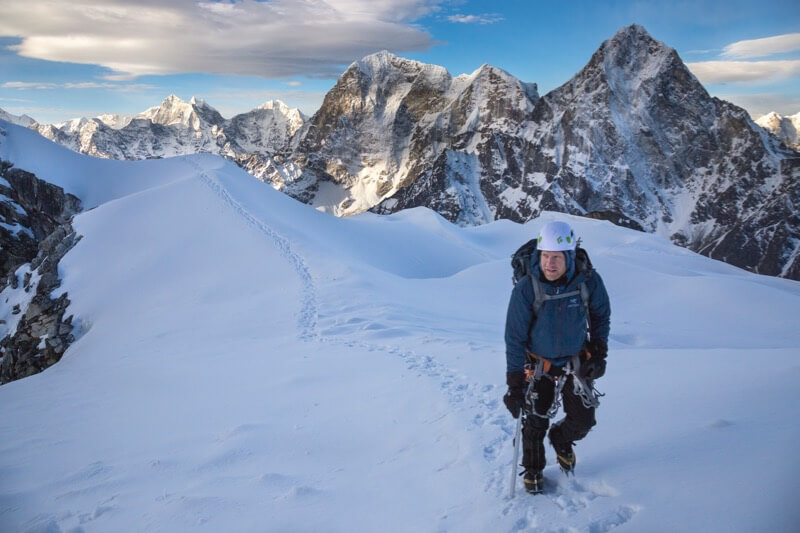 One thing to consider is the difference between silhouetted and non-silhouetted people in your photos. Besides the obvious visual differences, there are a lot of responsive differences as well. Look at the first photo of two women hiking in front of Colorado’s Crestone Needle. It is a publishable photo that tells a story of two people hiking in Colorado. Now look at the second photo of two hikers in front of Ama Dablam in Nepal. It is also a publishable photo telling a similar story.

The difference is that in the first photo, the viewer feels like they are looking at the adventure of these women in the mountains. It is a nice moment, but the viewer ultimately feels like they are witnessing someone else’s adventure. In the second photo, the faceless figures become more idealistic. The viewer can put him or herself into the place of the hikers. It does not even matter if the viewer has been to these particular mountains; they understand the emotions and feelings of hiking in a beautiful place.

By silhouetting the figures, the viewer can have a more personal connection with the image. That is not to say you should always shoot silhouettes; it is important to photograph people in both lighting conditions. Just keep in mind the various ways people can connect to your images. 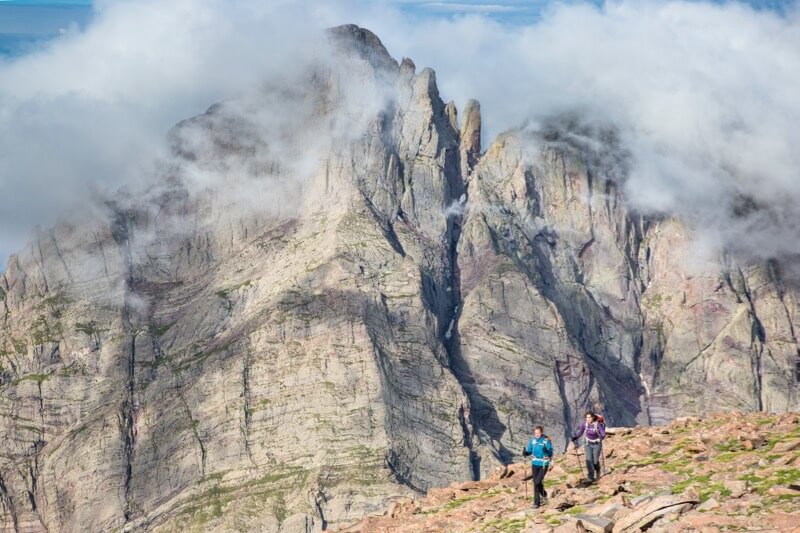 One of the best reasons to place people in your mountain photos is scale. If you are like me, you have probably shot a beautiful mountain scene, having to explain to people later, “It was much bigger in person, I swear.” Adding a figure—especially a small figure—to the landscape can really give the viewer a sense of scale. The viewer will have something to compare the peaks to, allowing them to have a better grasp of how big the mountains really are. Look at these photos below. Each includes small figures that help convey the grandeur of the peaks behind them. Imagine these images without the figures and you can see how much more powerful the images with people are. 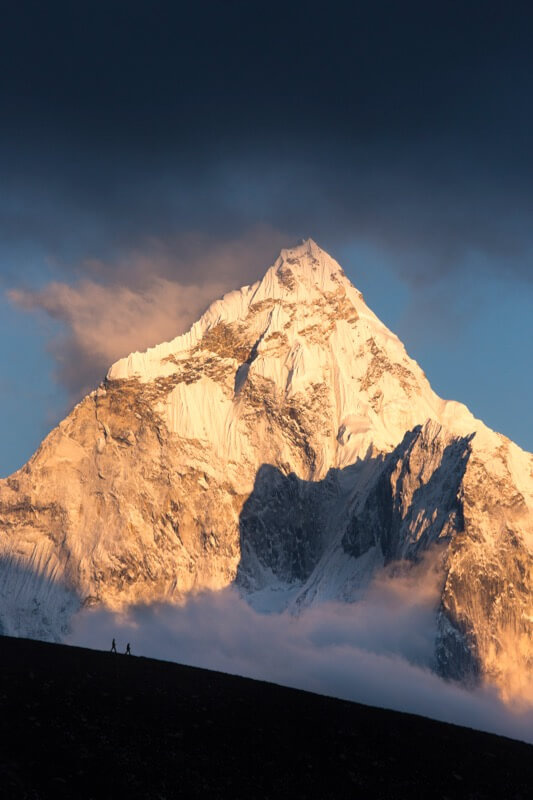 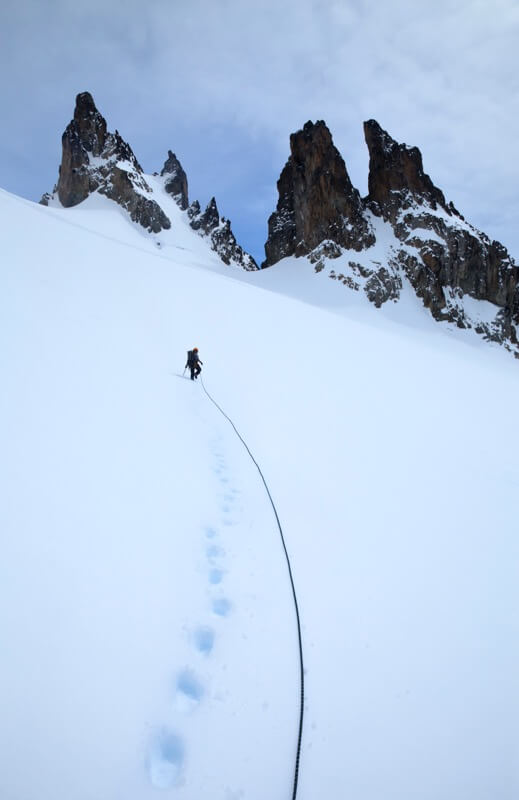 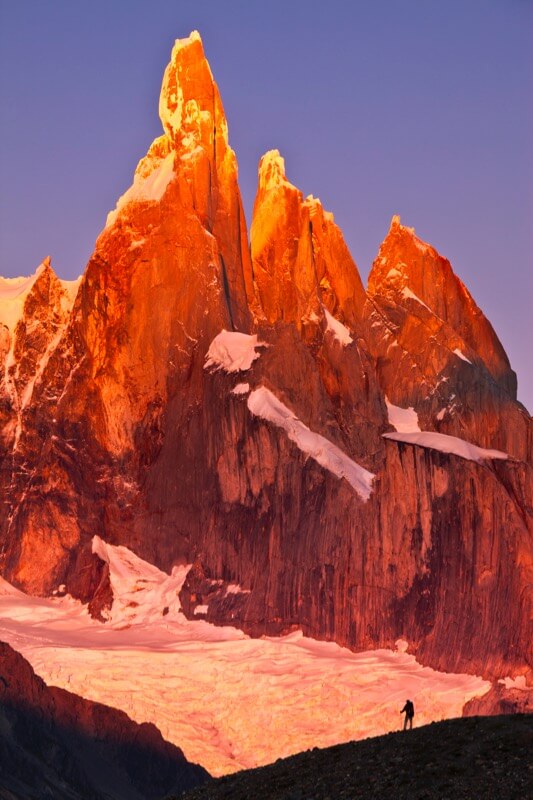 Tents are also a great way to photograph “people” in the mountains. A photograph of an illuminated tent with rugged peaks behind it is an image that anyone who has ever backpacked can relate to. For the same reasons I mentioned earlier about silhouettes, people will have an emotional connection to photos with tents in them. In the photos below, if you were to remove the tents, they would still be nice images of mountains. With the tents, people can connect to the emotions of camping under beautiful peaks. The best time to photograph tents is during the blue hour, where there is still enough light for the landscape, but it is dark enough that you can make your tent glow. To get the glowing effect, have a friend sit in the tent with a headlamp. Have them move it all over, not stopping in one place for too long. This will give a nice even light over the whole tent. If available, use a warm colored tent to contrast the blue light of night, making your photo pop. It takes a little practice to get the light even, but the results will be striking. 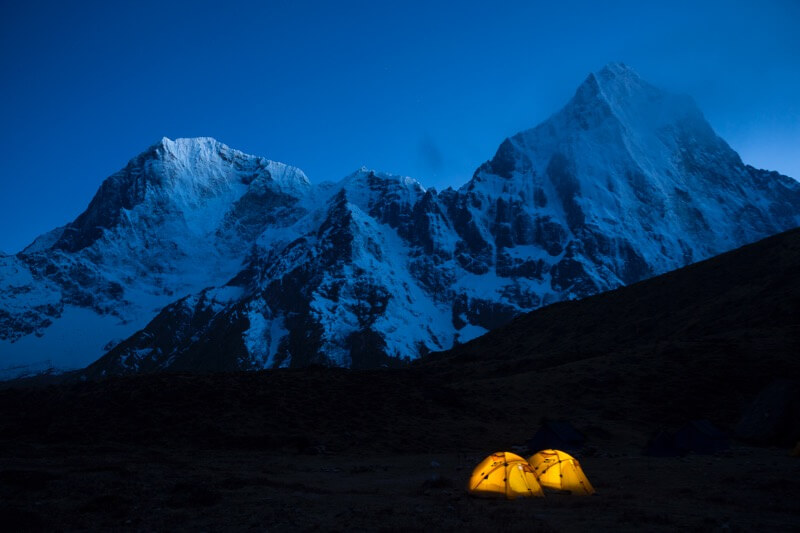 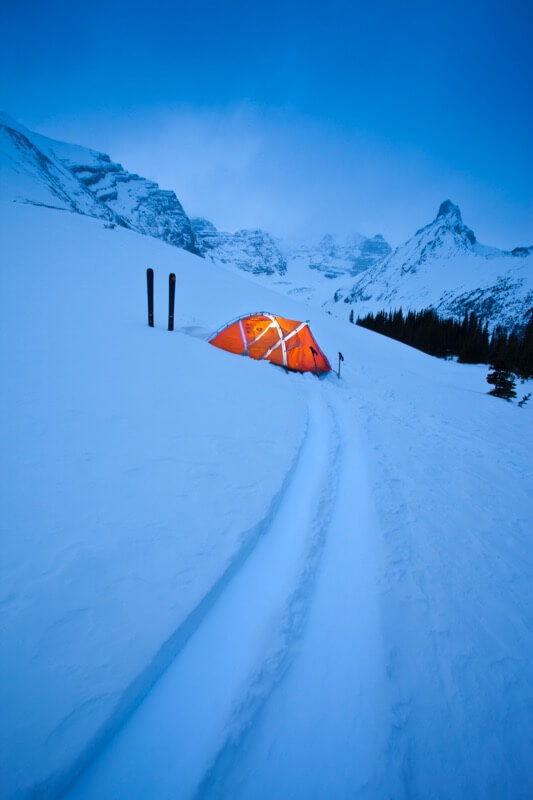 The bottom line is that by placing a person into a beautiful mountain landscape, you add that extra element that really takes your image to the next level. Early in my photography career, I was practically allergic to people in my photos. I was always trying to keep people out of my images. As I matured as a photographer and realized the value of people in photos, I strove to get people into my shots. Not only will your images become more valuable to magazines and commercial clients, but people will also connect more easily to your photos.

There are a lot of ways to make great photos and I am not saying every great photo has to have a person in it, but keep it in the back of your mind, and if the opportunity arises, try placing a person in the photo and see how it changes the feel of your image. These two photos in Yosemite National Park would both work perfectly fine without people in them. However, with the figures in them, these photos go to another level and create a lasting image that tells a story of adventure and the interaction between man and nature. 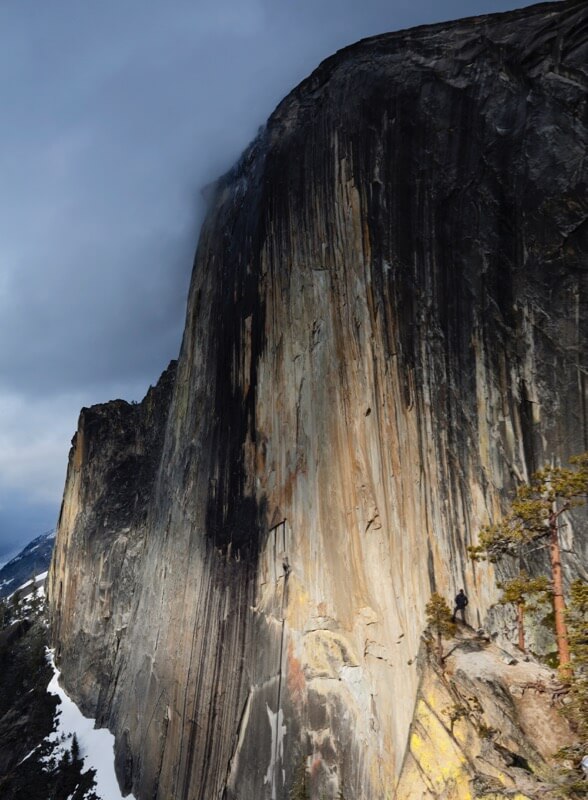 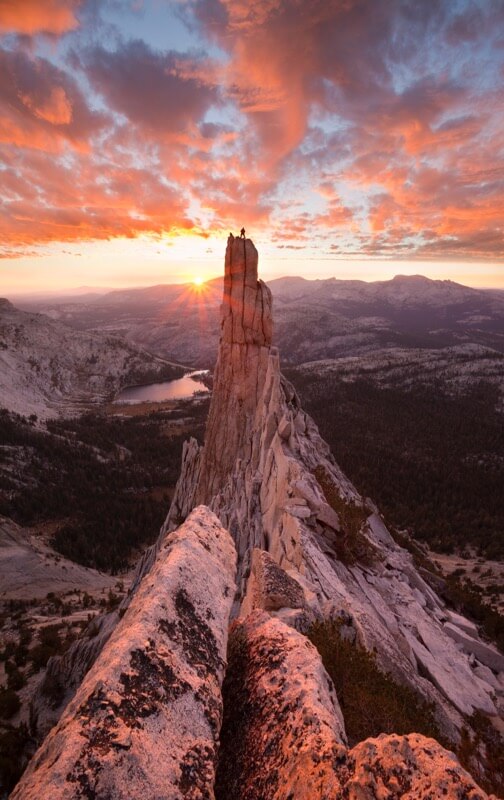 The mountains are a special place. Whether you are in the high peaks of the Himalaya, the granite spires of Patagonia, the colorful Rocky Mountains, or the mountains in your own backyard, the adventure is waiting for you. To us photographers the mountains provide a home away from home, as well as an arena to practice and refine our craft. Be safe, have fun, and enjoy these spectacular places! 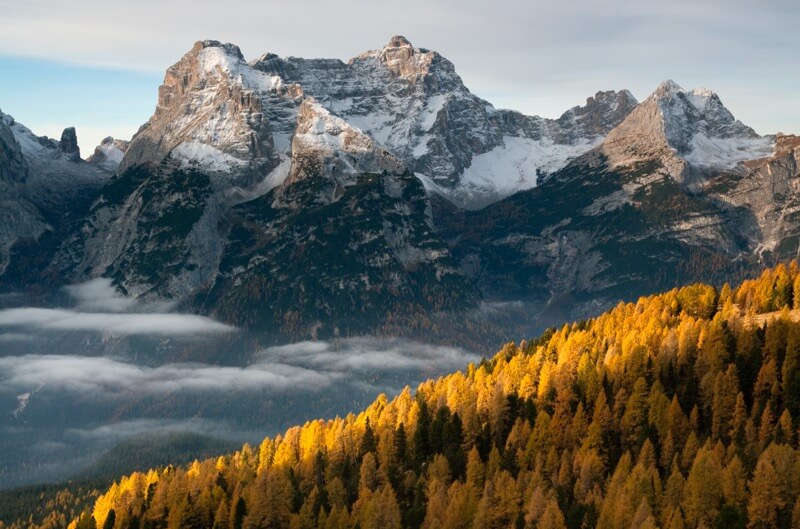