My photography business is built on invisibility. An Eric who is not there is a good Eric.

By that I mean that as a wedding photographer, my job is to capture the celebration. I don’t create smiles, tears, joy, laughter. I record them. There’s a humongous distinction. In fact, the more involved I am with the subjects, the less likely those special moments will actually happen, as they perceive that I’m around.

Denis Reggie refers to it as the ubiquitous lens. Everywhere and nowhere. My clients love me for it. And yours will too. I’ve included some comments from my clients below to illustrate how much this means to them.

Using these eight tips is as good as downing a full bottle of Acme Invisible Potion (at a fraction of the cost). Hope it tastes better, too. 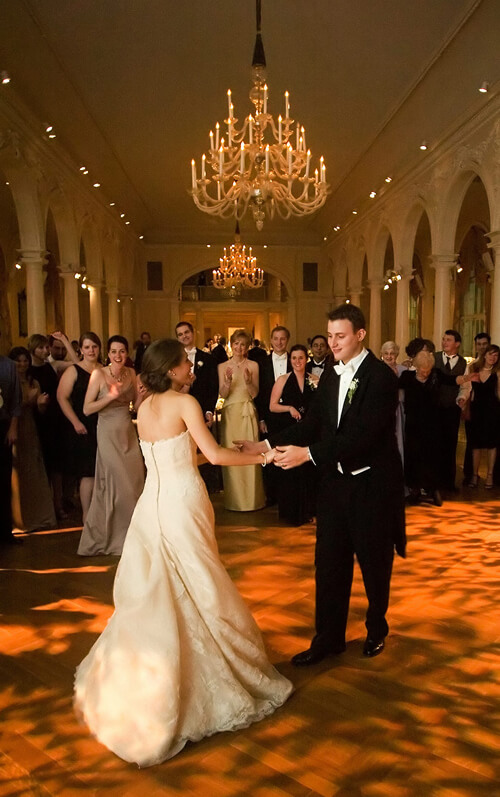 You are a vapor in the wind. The longer you stay in one spot, the more people are going to notice you. (The exception is the ceremony, of course, but for the rest of the day, you need to be very mobile.) There will be times when you find something amazing happening, and you’re in the perfect spot and need more than twenty seconds to nail it. Cool. But don’t linger too long. Hit and run.

Besides not being noticed, you’ll find that if you move, you’ll see another angle, another expression, different lighting, a better background on the same scene. Adjust, nail it, and move again.

Think about the servers at the reception. When is the only time you notice them? When they are standing against a wall (not doing their job). Same with you. Get a move on, Jack.

“He had a way of being virtually invisible during the event.” – Robyn, Mother-of-the-Bride 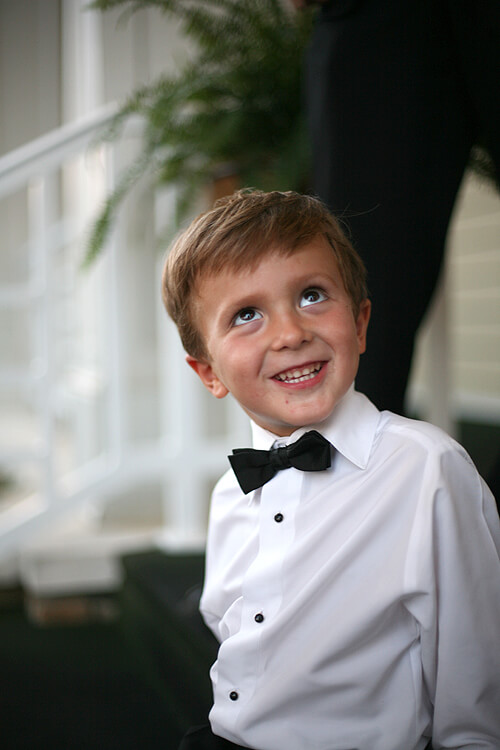 Shoot From the Hip

There are times when you are really close to the action and you know that as soon as you raise your camera, you’ll ruin it. People can feel that camera and everything changes. Don’t do it. Shoot from the hip.

I don’t do this often because it is slightly risky. Only when I’m caught in a jam. But it’s fun when it works. This works especially well with kids. Shooting from the hip puts the camera on their level.

“Eric was so discrete, even taking photos with his camera down by his side!” – Amy, bride. 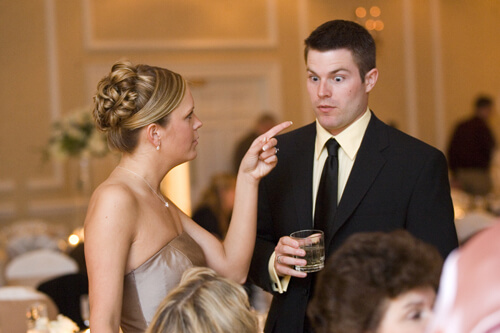 This is the opposite of shooting from the hip and is obviously preferable to it in many circumstances. Back away from the action and shoot with the telephoto. This is common sense. Telephoto in a crowd not only moves you far enough away from the subject that you won’t be noticed, but you crop out a lot of the clutter. Go with a wide aperture. Shooting telephoto isolates the subject via depth of field as well.

“The most wonderful part about it was the fact that I don’t even remember seeing Eric snap the shots.” – Mary Ellen, Bride. 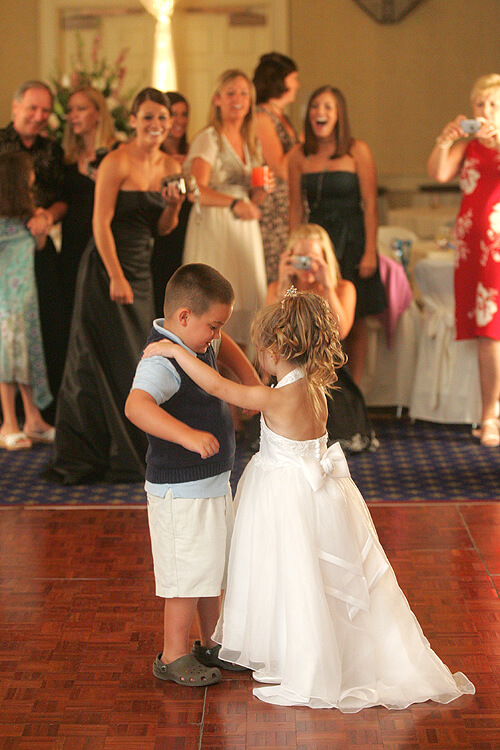 Look AROUND The Kids

Obviously, you want to shoot the cute kids doing cute things, but as soon as you’ve nailed it, zoom out to see moms, uncles, friends laughing at the kids. Include them in the pics with the kids if possible. If not, shoot the adults on their own.

“Eric has a wonderful talent of telling the story of your special day through his pictures.” – Jennifer, Bride. 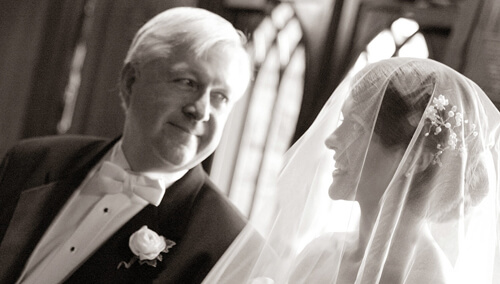 Sometimes you need the flash, but if you can get away without it, give it a shot. Of course, it helps to have really fast lenses.

This shot was taken wide open with a 50mm 1.4. Backlighting on a bride’s veil is always nice. This is right before the father walks her down the aisle, and he’s getting his last look at her before the doors open and he gives her away. Very poignant moment in almost every wedding. It’s just the two of them and the wedding director and me in the vestibule. Using a flash would have been pretty distracting. I’m standing as still and quiet as I can, trying to capture and not distract.

“He was always around, but did not interrupt any of our special moments of the day.” – Ginger, Bride. 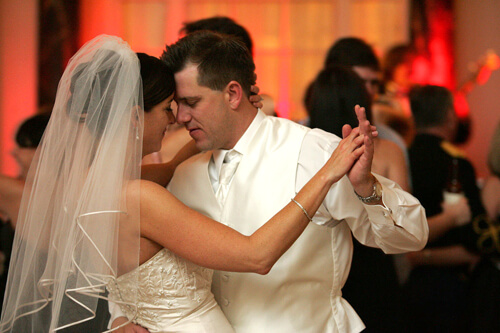 No matter how fast your lenses are, you’ll need to use flash in a lot of instances. And it’s awfully hard not to be noticed when you have a flashing light attached to your head. Solution? Turn that thing around and bounce it off a wall behind you. The flash is pointing the other way, and it’s like someone is taking a picture in the opposite direction.

I could write 43 pages on the many benefits of bounce flash. (And I’m not talking about straight up off the ceiling. Hello, raccoon eyes.) One of those many benefits is that you are less noticeable to the subject.

“The pictures really captured the feeling of our wedding.” – Beth, Bride. 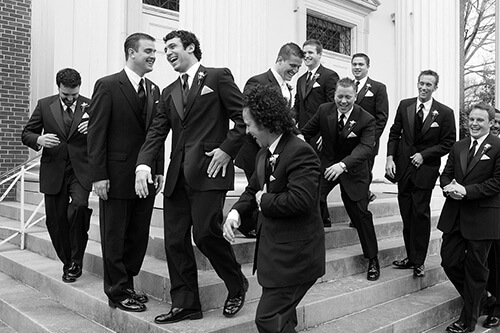 The natural tendency when you’ve shot a formal posed portrait is to put the camera down and start getting ready for the next one. But some of the best candids you’ll get all day are the ones between the posed shots. Keep that trigger finger itchy. The subjects are not expecting you to keep shooting, and they are much more natural in those few seconds.

In this picture the guys had just broken up from a posed shot, and someone cracked a joke resulting in 11 great smiles and a really fantastic image.

“He has an exceptional talent for capturing the true emotion of the moment.” – Audrey, Bride. 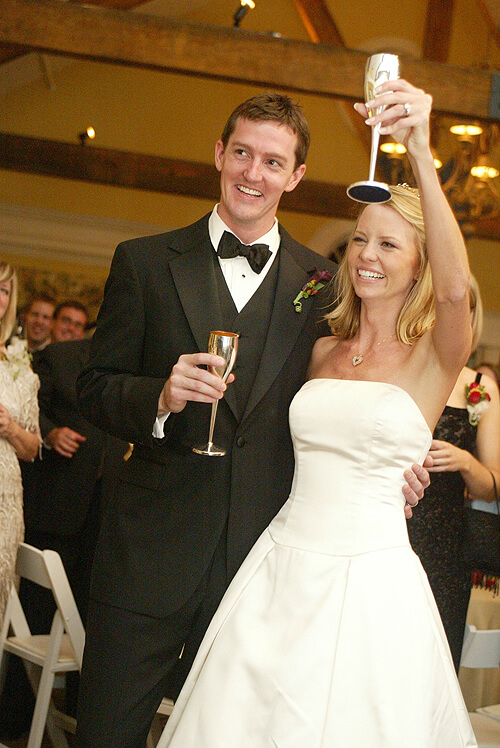 It doesn’t take long in the wedding industry to know that guest lists can get out of control. The result is that the reception venue gets a little crowded. They booked a hall that holds 150, but 273 just walked in the door.

In this image, it was time for the toasts, and there was no room to breathe. I was right on top of the bride and groom, and I really didn’t want them staring square into a lens. So I crouched down. The result was not only that I got out of their faces, but they are much more isolated in the image. Instead of them being lost in a sea of people, it’s just the happy couple.

“Everyone who sees the pictures comments on how stunning they are and how honestly they capture the spontaneous, beautiful moments of our wedding that would be lost with more traditional, posed shots.” – Kate, Bride.